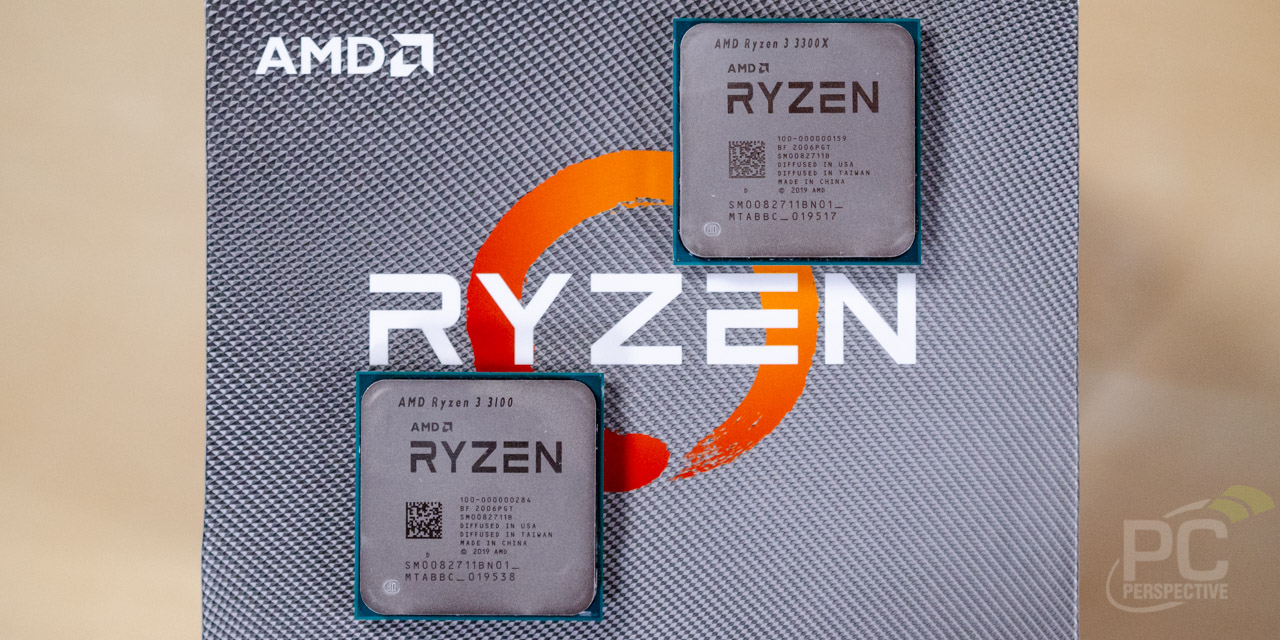 The Zen 2 Desktop Family is Complete

July 7, 2019 seems like such a long time ago now, but it has somehow been less than one year since the launch of Zen 2 with the Ryzen 3000 series. AMD dealt a crushing blow to Intel with this desktop launch, building on the already impressive performance of the Zen+ Ryzen 2000 parts.

The flagship 16-core, 32-thread Ryzen 9 3950X was initially delayed, originally planned for a September 2019 release, eventually launching on November 25, 2019. It was in short supply at first, and when AMD sent one along it proved to be worth the wait with spectacular all-around performance – and lower power consumption than the Ryzen 9 3900X.

Today, the Zen 2 desktop product stack appears to be complete, with the launch of the Ryzen 3 3300X and Ryzen 3 3100 processors. Both are 4-core, 8-thread parts, with the 3300X offering higher clock speeds, and a different internal configuration (more on this later).

We still don’t have Zen 2 processors with integrated graphics (the Ryzen 5 3400G and 3200G are Zen+/Vega parts), but otherwise this is a complete desktop family with prices ranging from $99 to $749.

As we mentioned above, AMD has not simply differentiated these two Ryzen 3 processors by their requisite clock speeds. Instead, a different approach to topology has been taken with the two models. 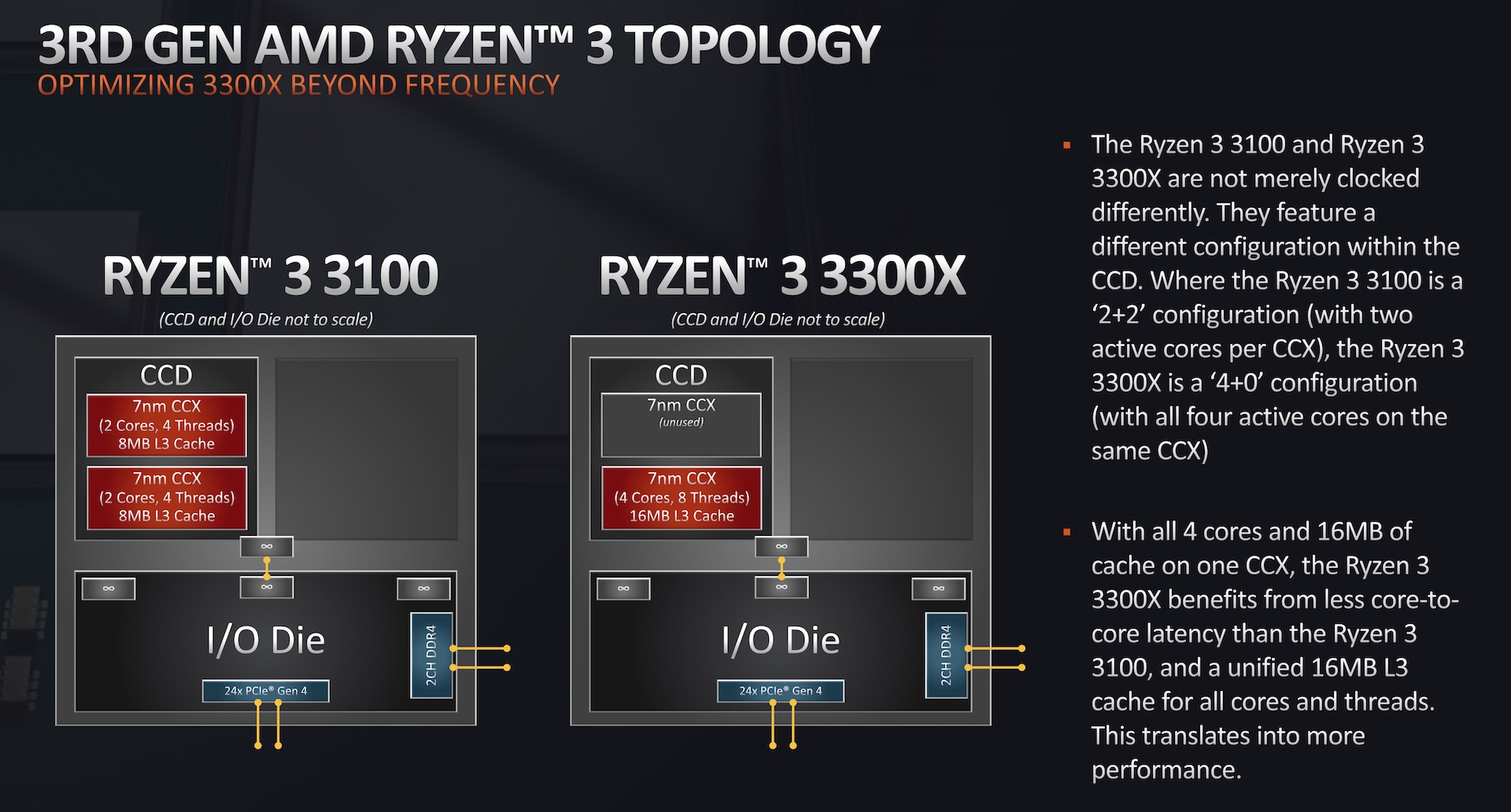 The Ryzen 3 3100 is a 2+2 configuration, meaning that two cores are active per CCX. This also means that the cache is split between the two, with 8MB per CCX.

Thus, the $21 premium for the Ryzen 3 3300X not only buys you some higher clock speeds, but only one of the CPU complexes within the CCD is active, meaning that all four cores – and all 16MB of L3 cache – reside within one CCX.

As indicated on the slide above, less core-to-core latency translates into higher performance. How much more is the question, and that will depend in part on how latency-dependent a given workload might be (answering the question will require some benchmarking). 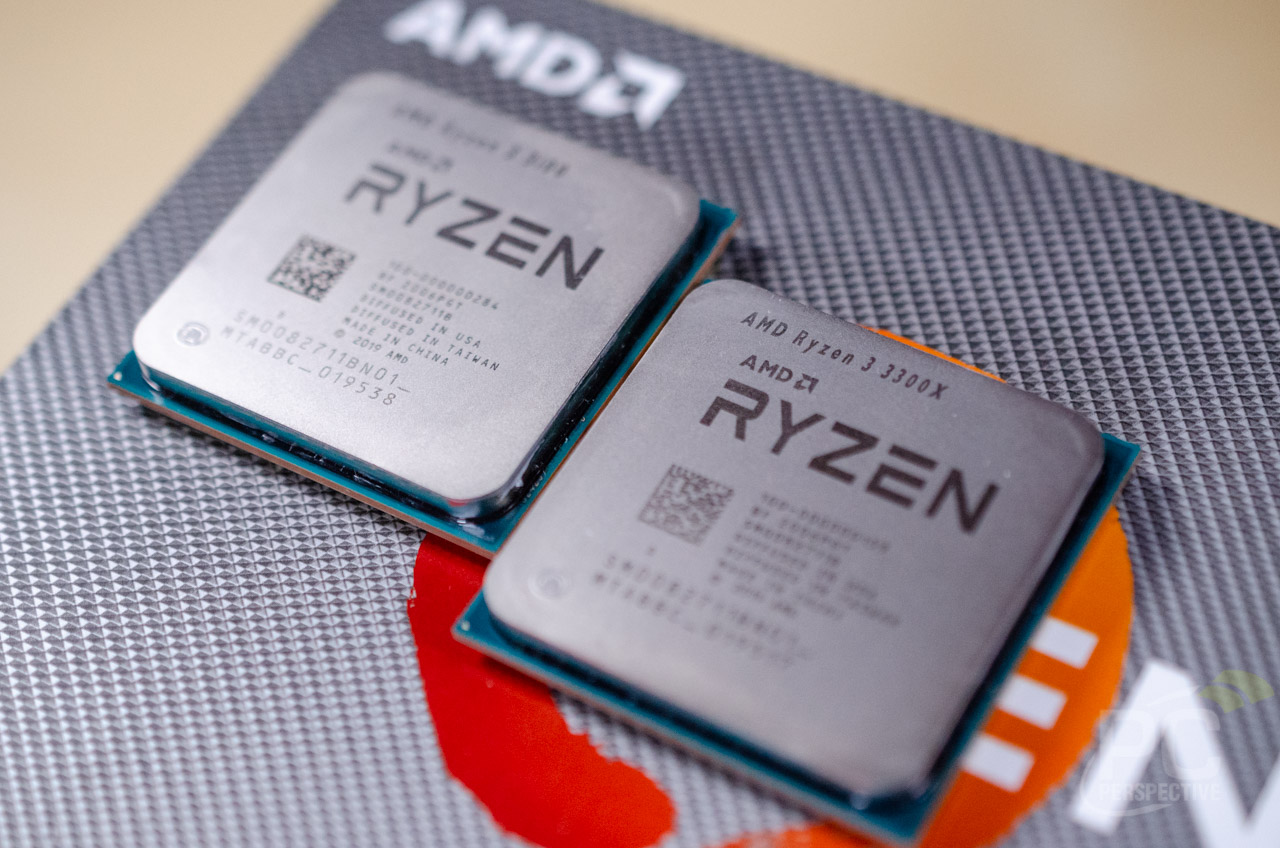 Let’s get right into it, beginning with CPU benchmarks. For these results, all-new CPU benchmarking was performed, using a clean installation of Windows 10 (build 18363.592), the latest chipset drivers from AMD and Intel, and the latest NVIDIA graphics driver available at the start of testing.

AMD benchmarking was performed using the new AGESA 1.0.0.5 release on our MSI MEG X570 ACE motherboard. Multiple Intel motherboards were used, depending on platform, with each board first updated to the latest available BIOS (versions listed in the test setup table).

Finally, memory speeds were selected based on the highest officially supported DDR4 standard for each CPU, with Zen 2 CPUs at DDR4-3200, and Intel CPUs ranging from DDR4-2400 to DDR4-2666 (the upcoming 10th Gen Core processors will be Intel’s first to officially support DDR4-2933 on consumer desktop). Regardless of speed selection, all memory was configured with the default XMP profile’s 16-18-18-36 timings at 1.35V.

This group of 10 processors, tested on the latest firmware and drivers for this review, is not perfect, but it should at least help to illustrate the potential of the new Ryzen 3 CPUs.

It just wouldn’t be an AMD processor review without Cinebench, and here we will get our first taste of the performance level of these new Ryzen 3 desktop parts. 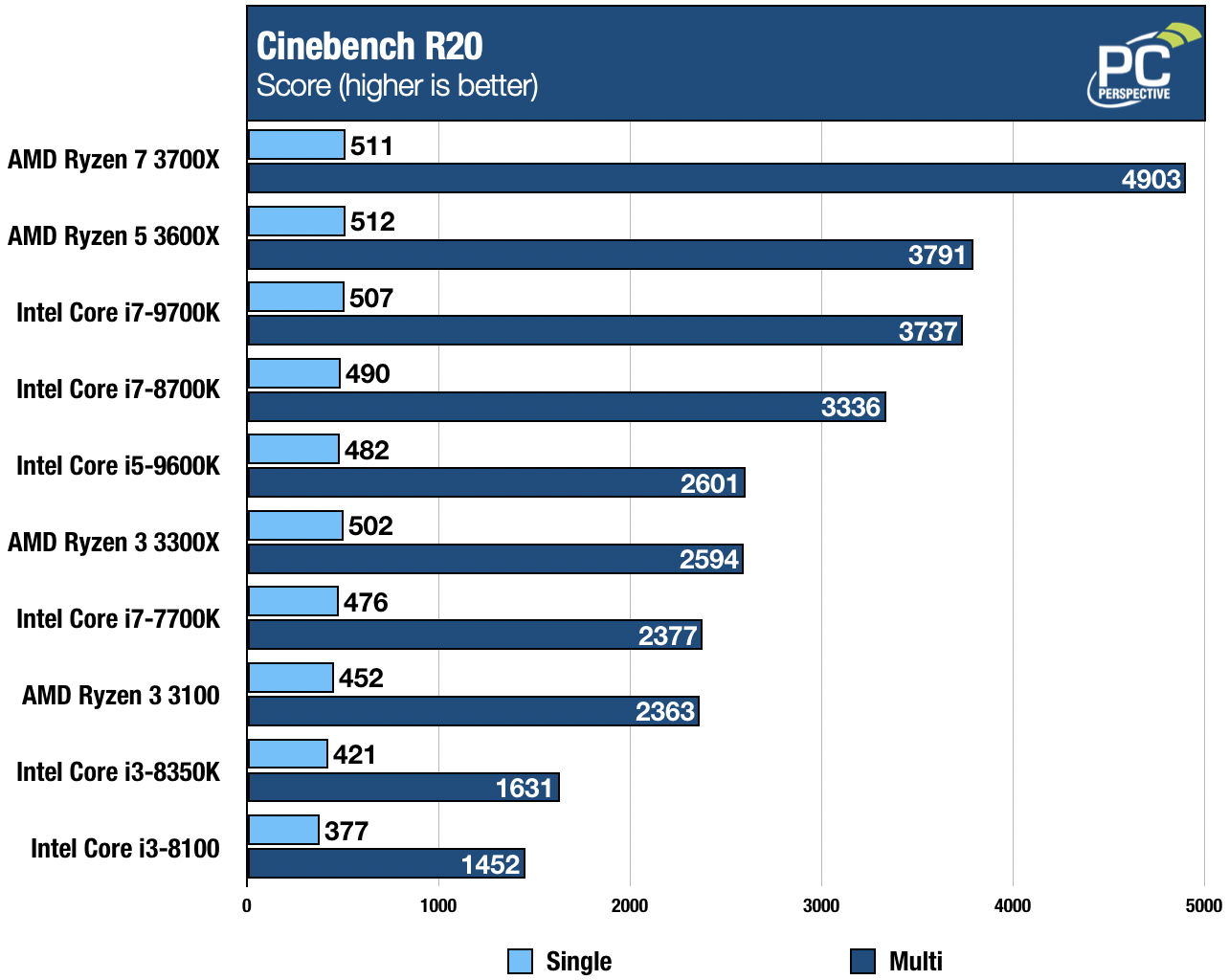 It’s only one test, but it is still remarkable to look at what AMD is bringing to the “mainstream” product segment here. Looking at the result vs. the Core i7-7700K, either of these new Ryzen 3 parts would have offered flagship-level desktop performance just three years ago, back when a Core i7 was a quad-core part with Hyper-Threading. 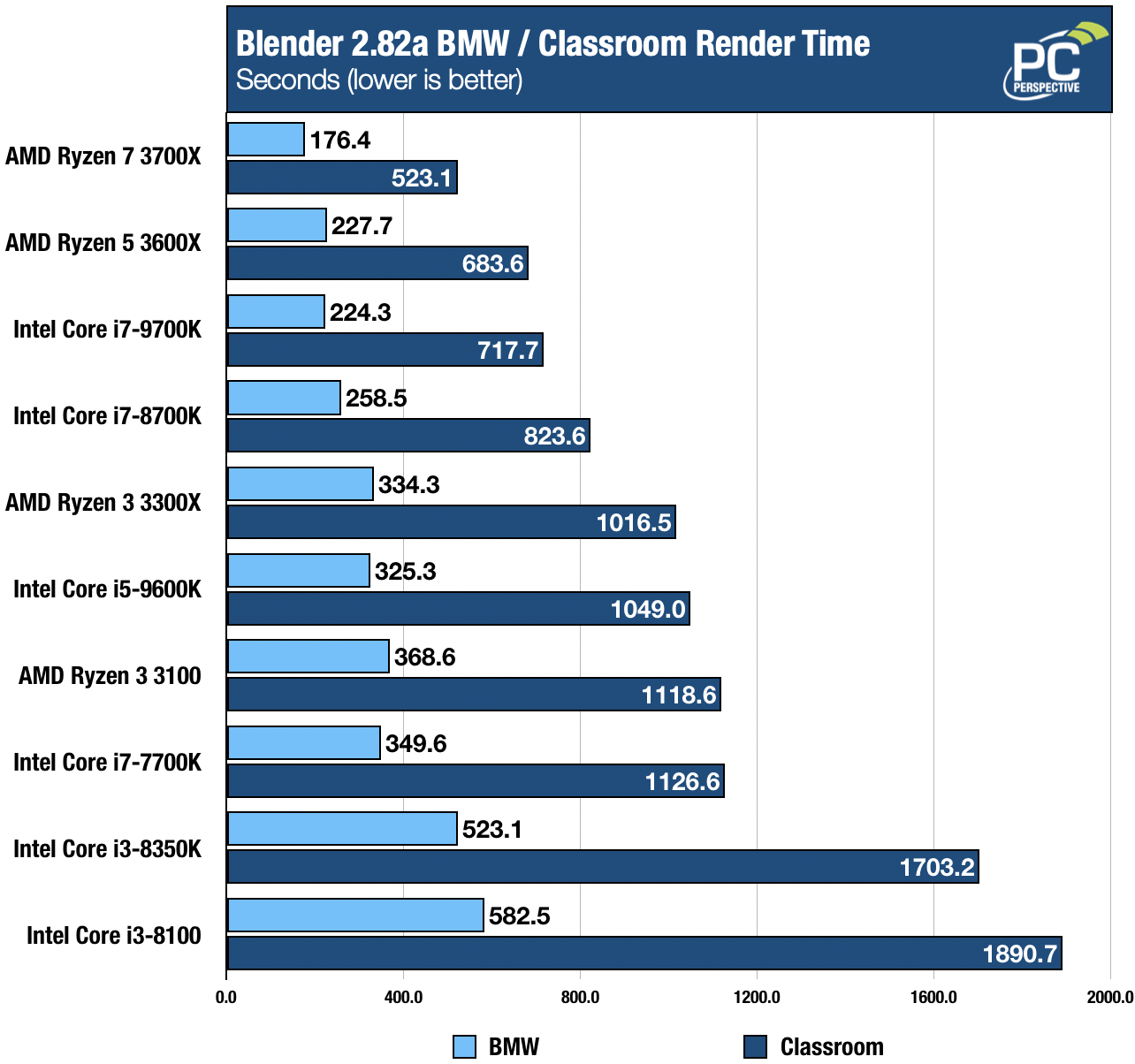 We begin with a look at single-threaded performance. 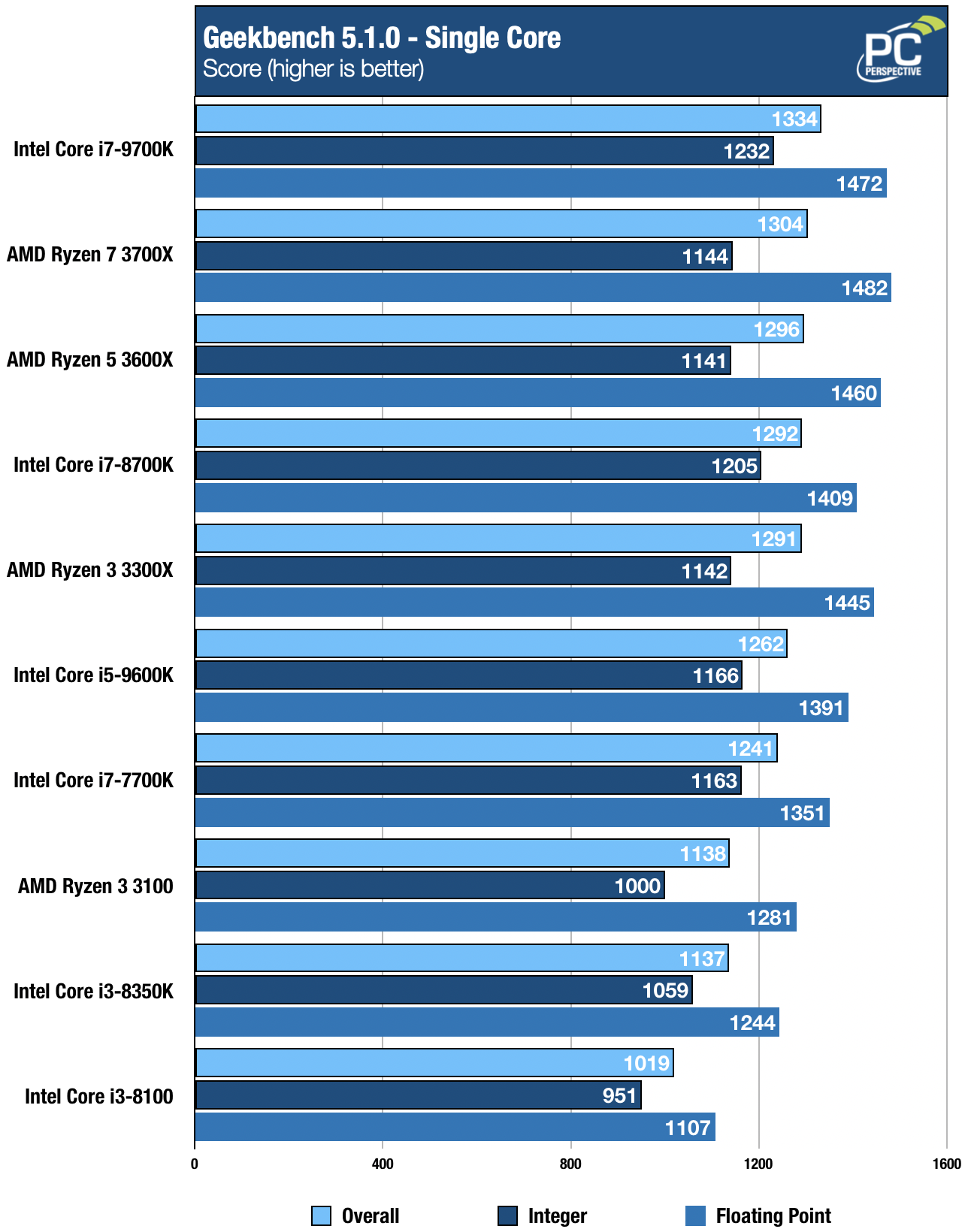 Another impressive showing for these new Ryzen 3 processors, with the 3300X in particular offering better single-threaded performance than Intel’s i5-9600K (not to mention the i7-7700K) in this test.

And now a look at multi-threaded performance in Geekbench. 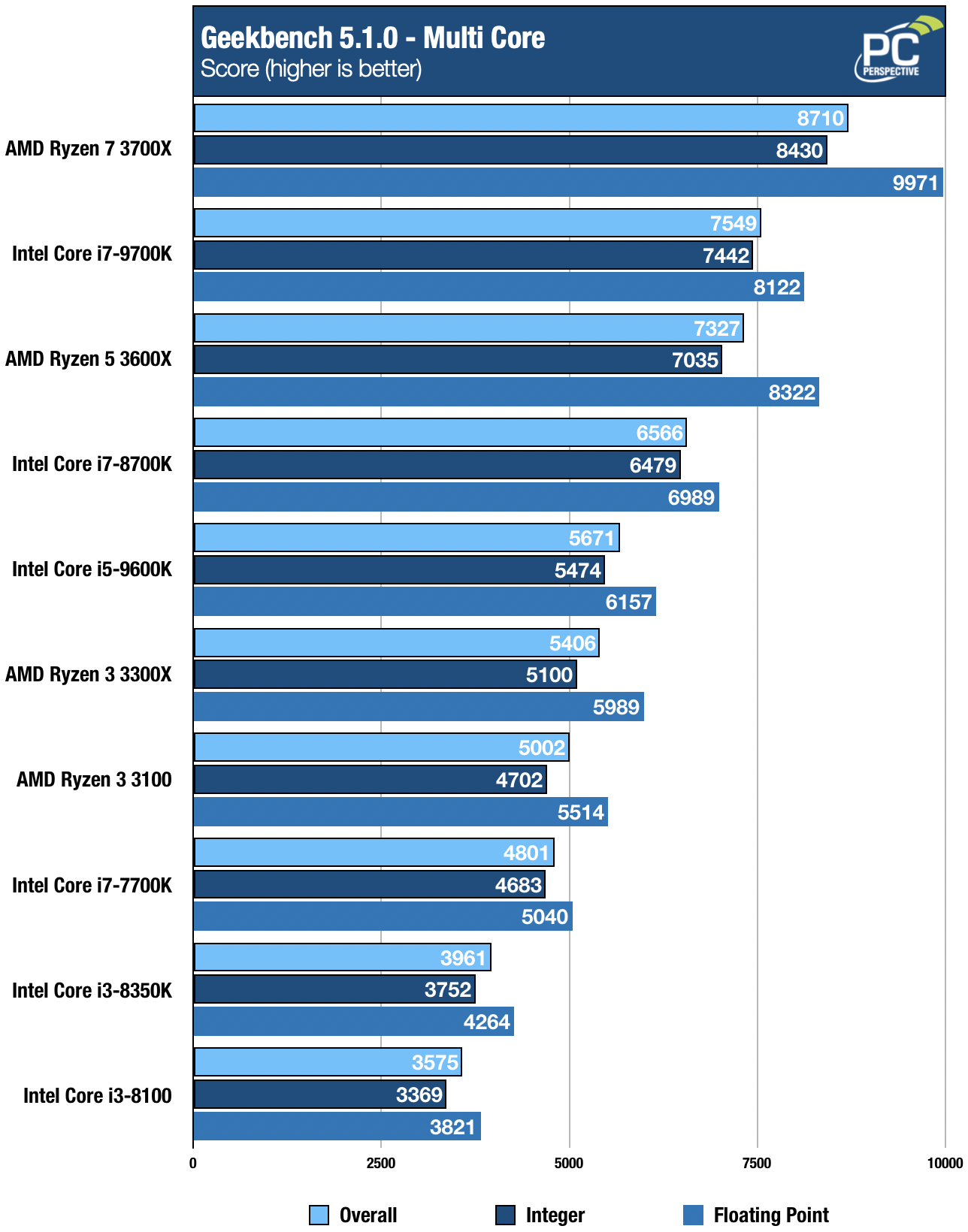 The Core i5-9600K suprises a bit here, jumping out ahead in the multi-threaded tests. It’s a reminder that a six-core part, even in the absence of Hyper-Threading, won’t always be at a disadvantage vs. the 4-core, 8-thread Ryzen 3 3100 and 3300X. Or maybe it means Geekbench is optimized for Intel CPUs. Who knows.

And now a couple of additional benchmark results for your reference. 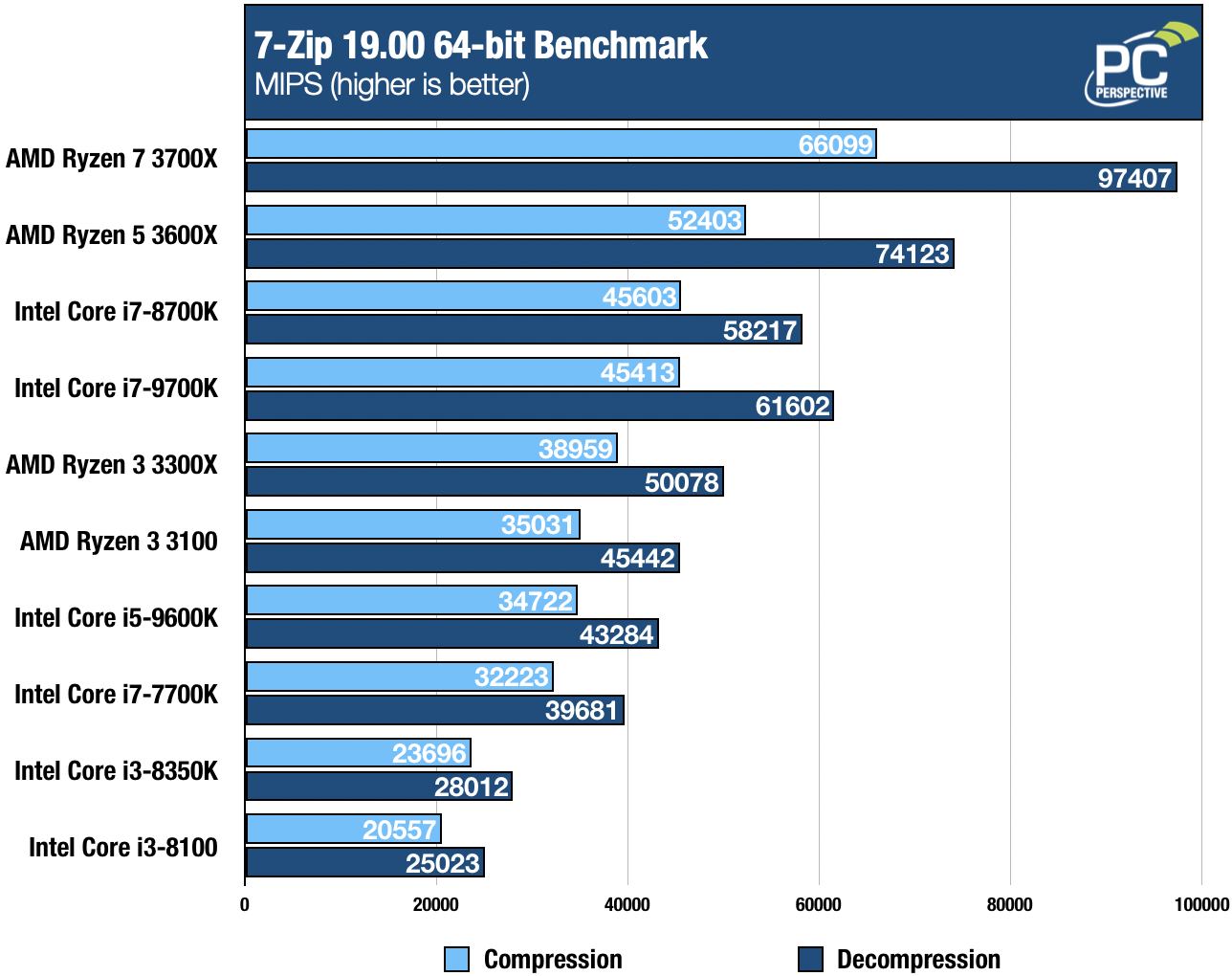 These 8-thread Ryzen 3 parts do quite well in the 7-Zip test, and some of this may be due to their memory bandwidth advantage. These Zen 2 CPUs are all running DDR4-3200, while the Intel CPUs are running 2400 to 2666 MHz. And yes, it’s quite easy to run memory at 3200 MHz and above with XMP on Intel platforms, but we are simply following spec for each CPU in choosing memory speeds. 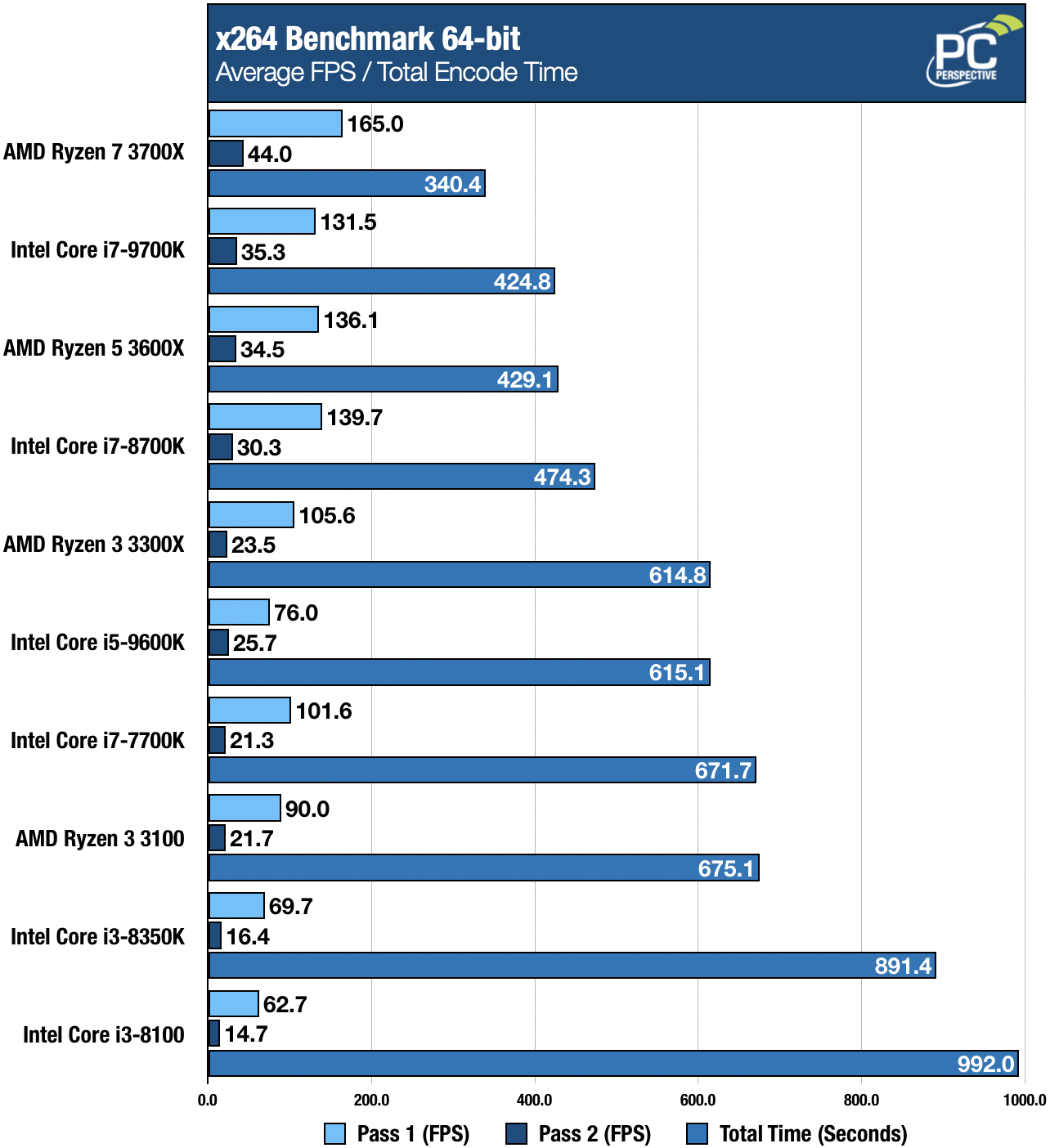 While 2-pass, 1080p, H.264 encodes are definitely out of fashion, the x264 HD benchmark (version 5.0.1) is still a reliable little command line test to measure CPU performance. Looking at total encode times it’s clear that these Ryzen 3 processors are punching well above their weight class, producing numbers on par with a Core i7 7700K, or better, in this multi-threaded test.

We’ve taken a look at some CPU benchmarks, and obviously these new Ryzen 3 processors are going to take you lot further than “mainstream” processors from the last generation when it comes to compute performance. But what about gaming?

To explore the potential gaming performance differences with these new Ryzen 3 parts we ran benchmarks and settings that intentionally put more strain on the CPU. We didn’t quite get to the 2080 Ti at 1080p level, but a 2080 FE at 1080p and less demanding games/settings is a slightly less extreme version of the same thing. It may seem academic to do this, and it is, but I have also taken to heart the suggestion that competitive gaming – with its emphasis on frame rates above quality – is a valid reason to benchmark with what I have characterized as “unrealistic” scenarios for enthusiast-level hardware.

During the marathon benchmarking sessions of the past several days (our all-new CPU testing included running these graphics benchmarks), quite a bit more data has been recorded, and a more comprehensive look at gaming performance with these (and other) low-cost processors is in the works. This is just what we have ready for today’s launch review, and more tests may be added in the hours following the initial publication.

At 1920×1080 resolution, the “high” detail preset, and standard textures, Far Cry 5 is not a particularly challenging benchmark; an RTX 2080 will be a little more CPU bound in these circumstances compared to our preferred 2560×1440/Ultra/HD textures setting with this title. 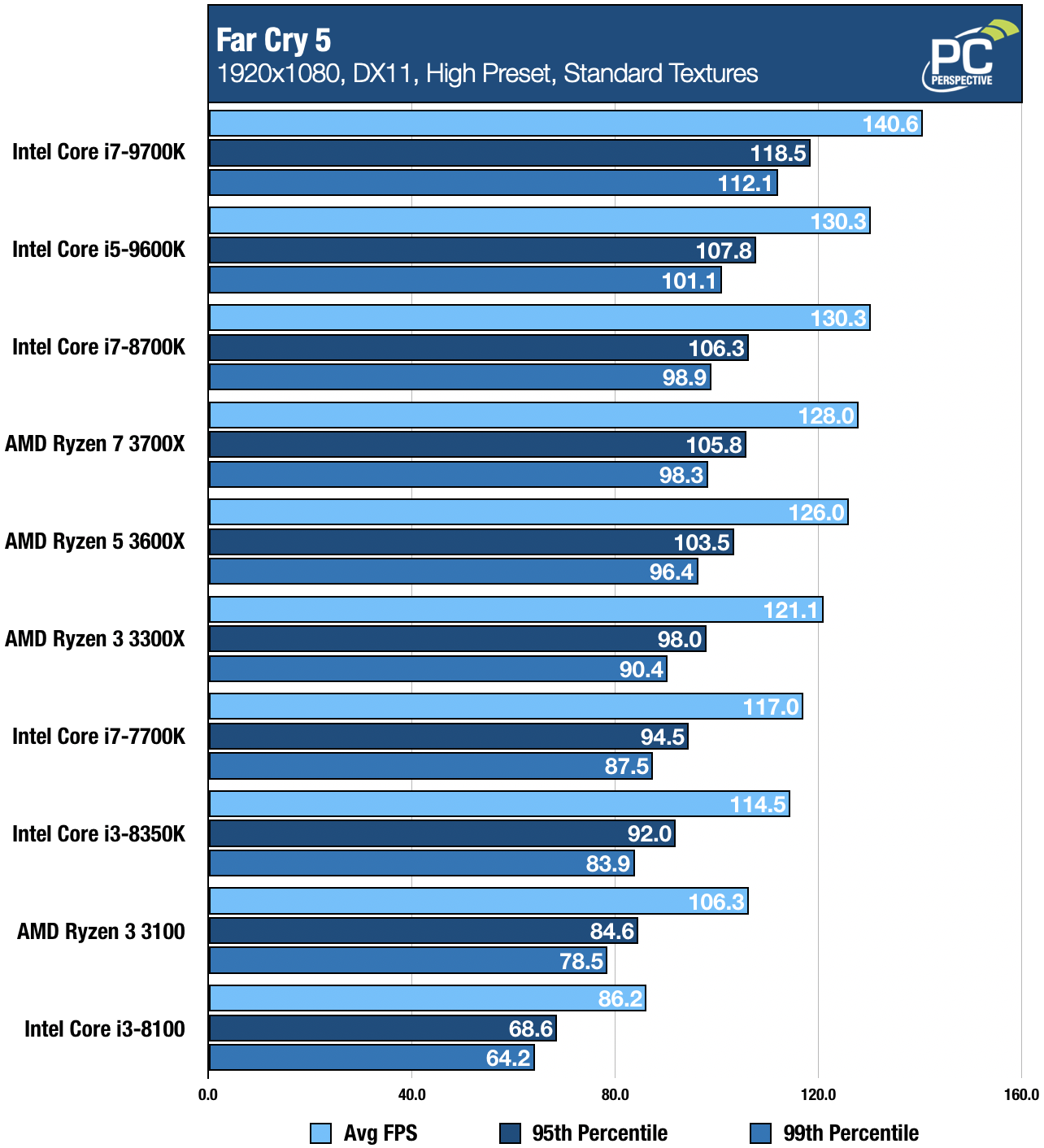 Intel CPUs taking the top three places here is a little surprising, though it is in keeping with Intel’s claims about 1080p gaming. Still, we are talking about a pretty small disparity between Intel and AMD at these particular settings, though it gets larger the further down the chart we go; the Core i5-9600K holding a 9.2 FPS average lead over the Ryzen 3 3300X, for example.

Next we’ll look at a DX12 title with Metro Exodus. This game is significantly harder on a GPU, so to make this more of a CPU test the quality level has been lowered to the “normal” (medium) preset. Another unrealistic scenario for a gamer with an RTX 2080, but we press on in the name of science. 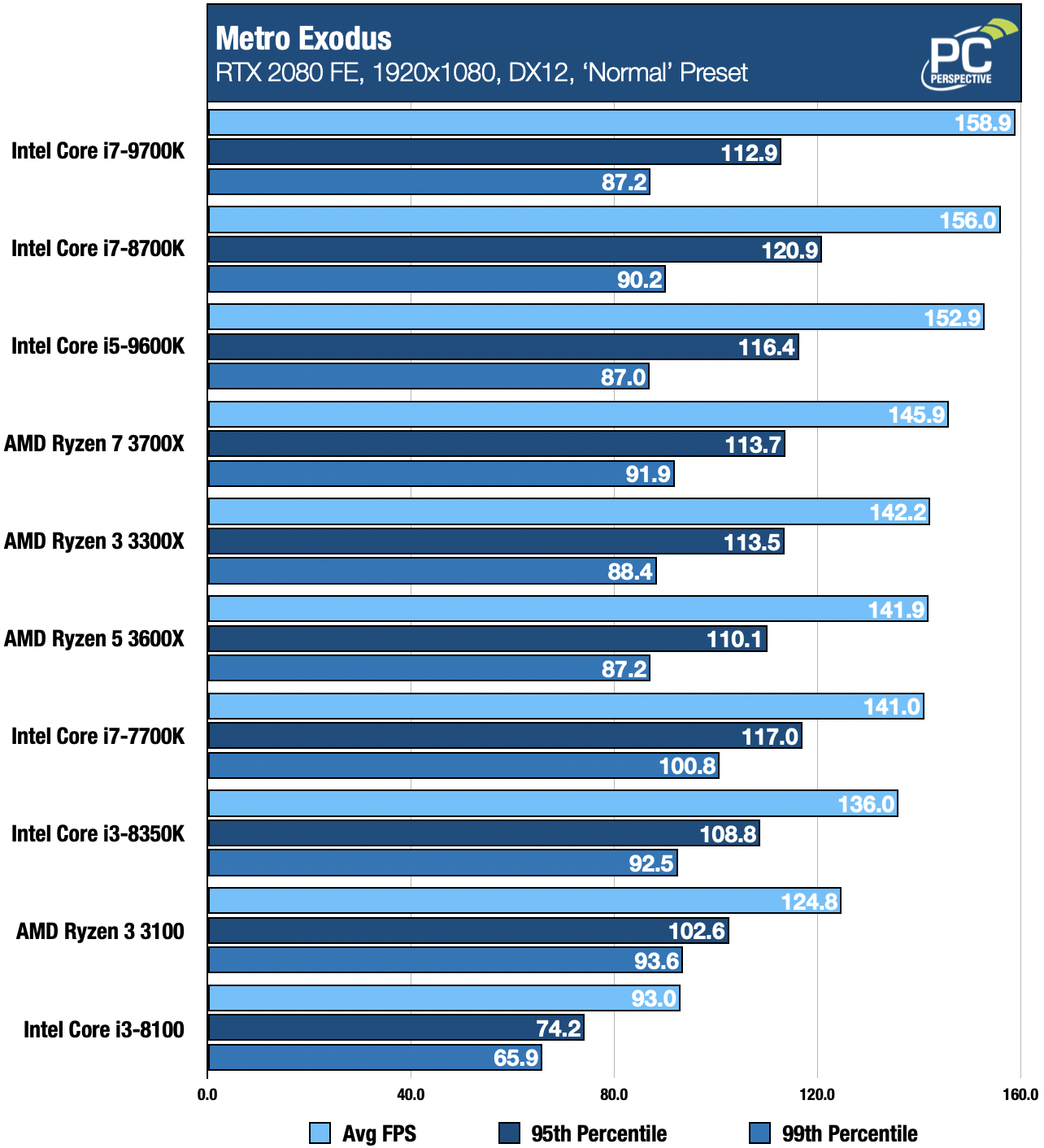 As with Far Cry 5 our lower-quality 1080p Metro Exodus test has Intel flexing its muscle at the top of the chart, but we are focused on the middle of these charts with the eminently affordable Ryzen 3 processors. And look at that, once again the Ryzen 3 3300X is right there with the Core i7-7700K – and slightly ahead if you’re just looking at average FPS.

What about a scenario with an even older, and easier to drive, game? Well, look no further than DOTA 2. And, thanks to a handy tool that allows for a consistent benchmark in this title (which does not offer a built-in benchmark), I proceeded to test this game at a 1080p and the “fastest” preset using the RTX 2080 FE and all ten of the CPUs in this test group. 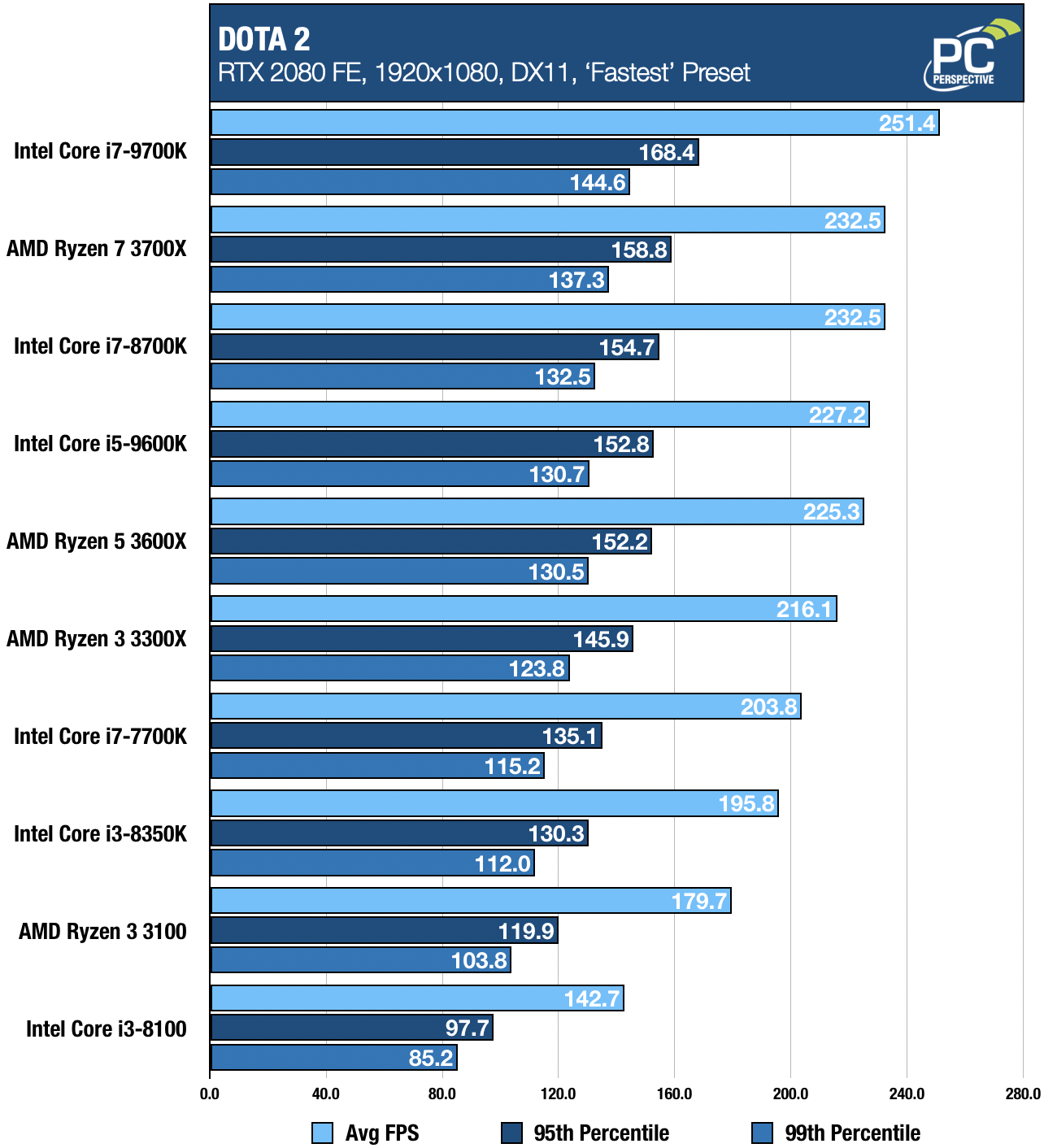 The numbers are a lot bigger here, but we see similar CPU scaling compared to the Far Cry 5 result. However, take a look at the bottom of the chart. The Core i3-8100 (we don’t have one of the 9th Gen Core i3 processors) is getting hammered by the Ryzen 3 3100.

Yes, your CPU can really hold you back in a game capable of very high frame rates on a given GPU.

A so-called ‘synthetic’ benchmark such as 3DMark Time Spy can show significant CPU scaling as well, but as you can see it doesn’t translate into any meaningful change in GPU performance. 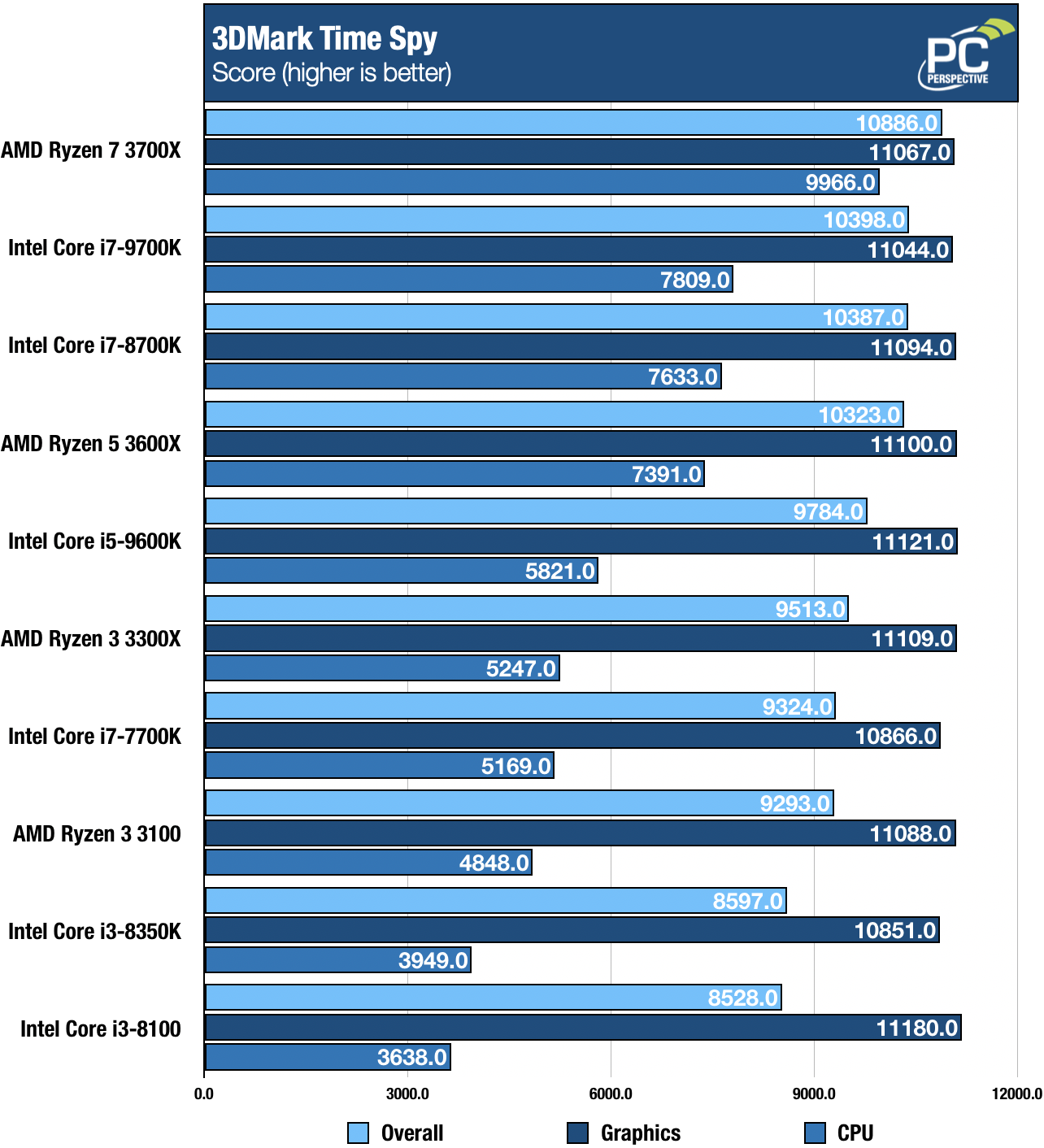 AMD’s pricing strategy with the Ryzen 3 3100 and 3300X is aggressive, to say the least. At launch, the lowest-cost processor in the Zen 2 desktop lineup was previously the Ryzen 5 3600 at $199, and with its 6-core, 12-thread configuration that CPU offered a per-core cost of about $33 (prices have come down since launch). 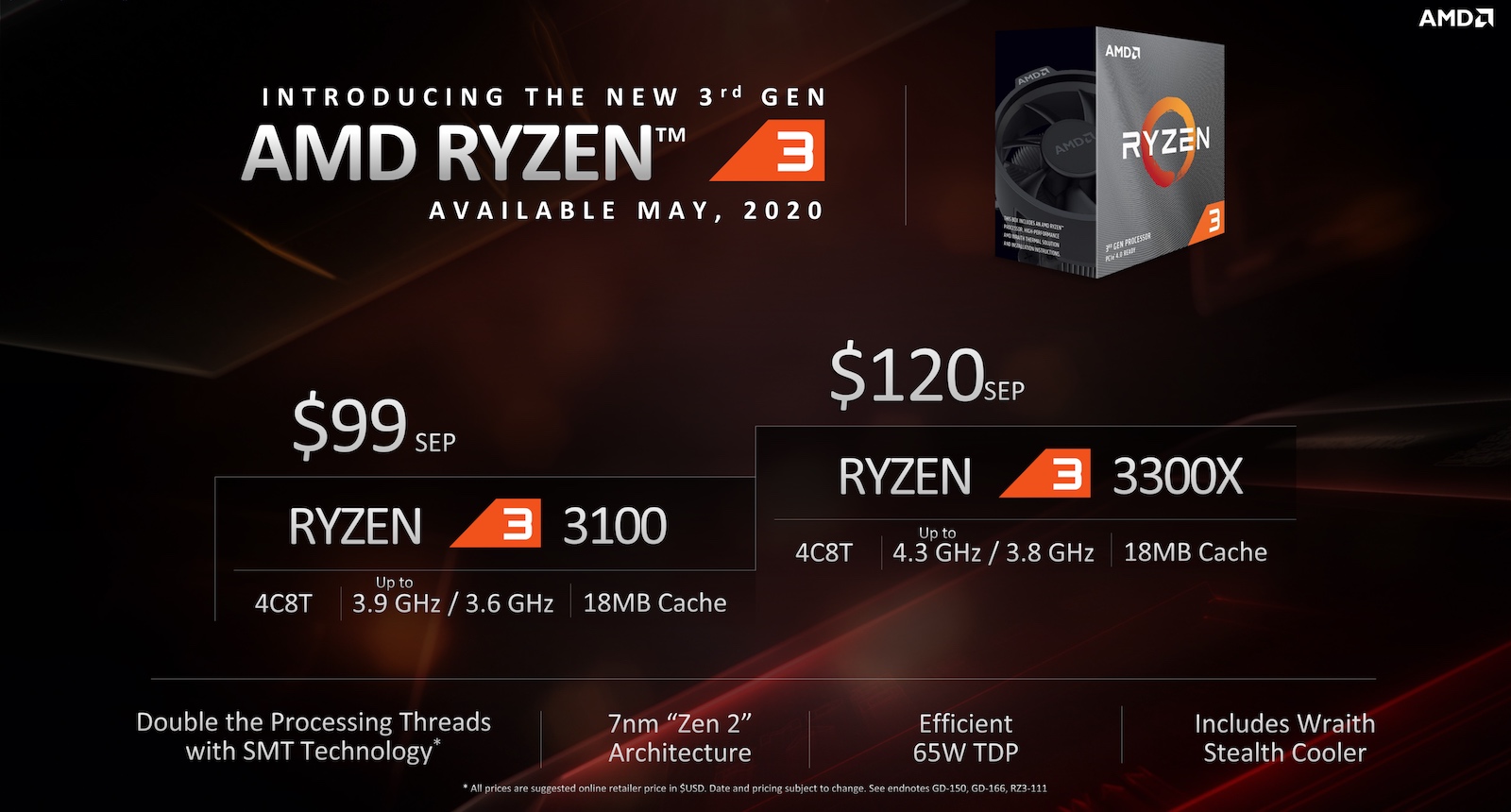 At $99 for the Ryzen 3 3100, AMD is cutting the per-core price down to just ~$25 for this mainstream quad-core SKU, with the higher-performance Ryzen 3 3300X at $30 per core. Pricing scales up as we move up the Ryzen 3000 lineup, though the ~$47/core price for the flagship Ryzen 9 3950X still seems reasonable considering how select the binning process must be to product that product.

Per-core pricing is better on the AMD side, though Intel can claim higher frequencies as 10th Gen Core i3 Max Turbo clocks range from 4.3 – 4.6 GHz (4.1 – 4.4 GHz all-core). We will have to wait for benchmark results with the new Core i3 processors to see if Intel can contest AMD’s value proposition here. 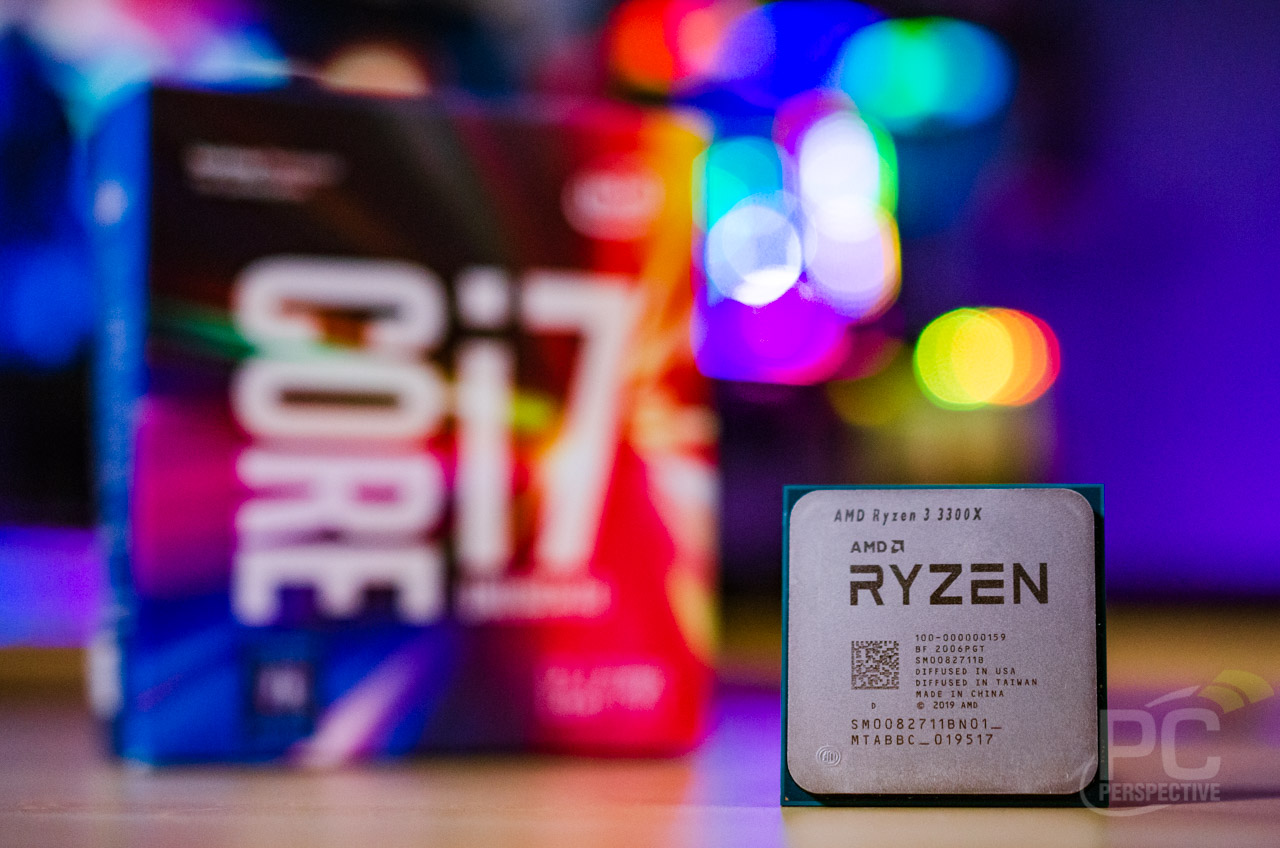 Clearly, AMD’s new Ryzen 3 3100 and 3300X offer outstanding performance. When factoring in their expected retail prices, it becomes rather incredible. AMD continues to build on their impressive Zen 2 desktop portfolio, and these will be the chips to beat in their price range.

It’s remarkable to see the performance of these $99-$120 processors relative to the Intel offerings on the charts above, and I can’t get over how close the R3 3300X is to a i7-7700K, but we won’t have a clear picture of the processor market in 2020 until Intel’s 10th generation CPUs launch later this month.

Regardless of the looming competition, AMD has hit a home run with the new Ryzen 3 processors (and with the Ryzen 3 3300X in particular). These are easily the most capable overall desktop parts in this price range right now, and seem poised to dent Intel’s desktop marketshare even further, on the DIY/enthusiast side of things at the very least.

The product is on loan from AMD for the purpose of this review.

The product remains the property of AMD but is on extended loan for future testing and product comparisons.

AMD had no control over the content of the review and was not consulted prior to publication.

Neither PC Perspective nor any of its staff were paid or compensated in any way by AMD for this review.

AMD has not purchased advertising at PC Perspective during the past twelve months.