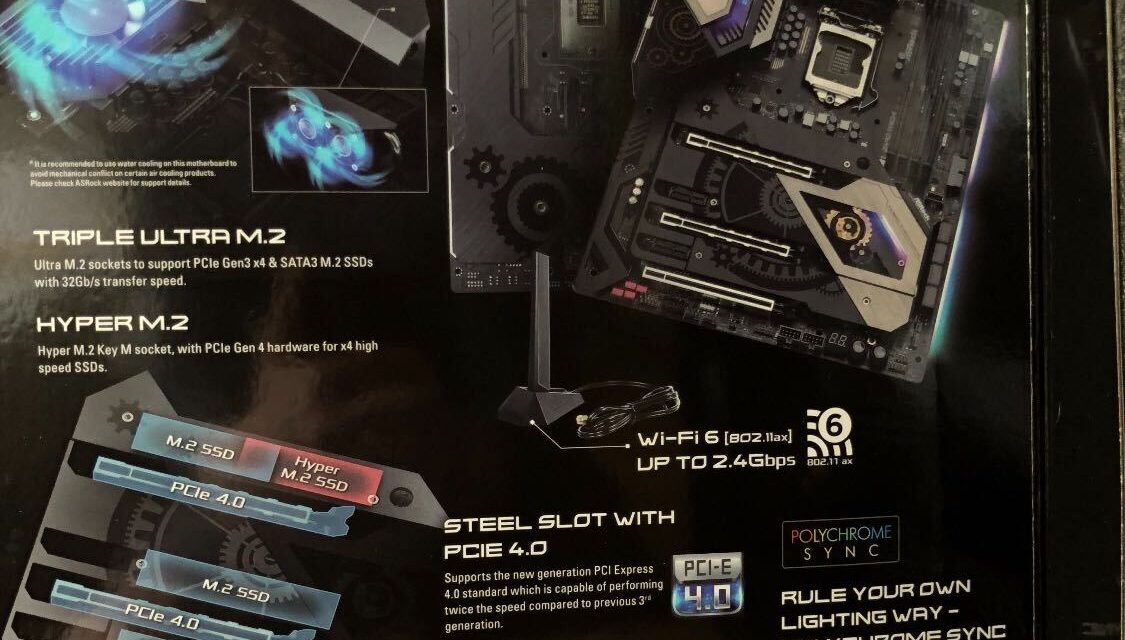 A Clock Generator Too Far?

Here is a peek at the ASRock Z490 Taichi from TechPowerUp which you should expect to get a lot more familiar with once it cools off on the PCPer test bench for a while.  This Z490 board features four M.2 slots, three PCI Express 3.0 x16 slots and two PCI Express 3.0 x1 slots, which is an impressive count on an Intel board compared to some previous generations.  The external ports are every bit as generous, with two antenna ports, five USB 3.2 Gen1 Type-A ports, two Gen2 Type-A ports and a Gen2x2 Type-C port, as well as including a PS/2 keyboard/mouse combo port for extra measure.

If you took a quick peek at the picture above, you probably have a burning question that you would like answered.  Two of the PCIe 16x ports and one of the M.2 slots are described as PCIe 4.0 which seems a bit premature considering none of the announced Comet Lake-S processors support PCIe 4.0.  As TPU used a Samsung 950 PRO M.2 in their testing, we don’t know how a Phison PCIe 4.0 controller will perform but we do know that the PCIe 3.0 performance is in the middle of the pack.  Stay tuned to see results with a PCIe 4.0 NVMe SSD.

They did have time to overclock both the memory and the i9-10900K on this board, and there they have good news.  They pushed their G.SKILL Trident Z Neo DDR4-3600 kit to 3900 MHz easily and without loosening timings and pushed the new Core i9 to 5.3 GHz on all cores.  There is more overhead to be unlocked from this chip, as long as you can deal with the increase in power draw and hear.  TPU’s custom cooling loop, which consists of a Swiftech Apogee SKF LT block,Bitspower SC6 pump and 360 mm radiator were not up to the task of keeping the chips thermals under control at higher frequencies.

There are quite a few others below to check out as well.

ASRock's award winning Taichi line is back, and aiming for the top of ASRock's Z490 stack. The cog and gear theme returns, along with a new VRM thermal solution that features a finned heat sink and active cooling. What other new tricks has ASRock included in the ASRock Z490 Taichi?

Everything you’ll need but for the 2TB of storage