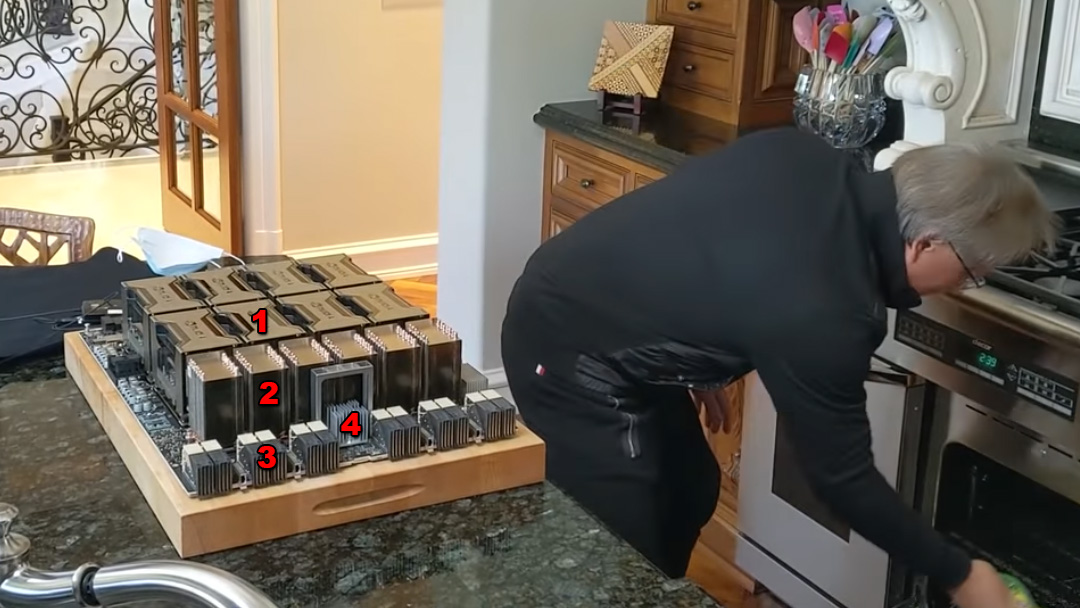 Jensen Huang seems to be working from home effectively. NVIDIA released a 27-second teaser of him taking “the world’s largest graphics card” out of an oven. The device appears to be a next-generation NVIDIA DGX computer (without its case).

There are some interesting things that can be seen from the above image (as numbered).

First, the device appears to have eight enclosed boxes on it. My guess is that these are the individual graphics devices. The most recent DGX-1 contains 16x Volta GPUs spread across eight dual-GPU boards, so it would make sense that the next generation would also have 16 GPUs.

Note: Comments suggest I’m wrong about #2, #3, and #4. The CPU and RAM should be on a separate board. The numbered components should be interconnect devices. Original post continues below.

Second, and possibly more interesting, is that there appears to be six large heatsinks directly beside the eight GPUs. These look like CPU coolers. If that is the case, then it appears like NVIDIA has tripled the number of CPUs from 2x 20-core Xeons to 6x… somethings. Normally the RAM should be very close to the CPU… but there is not a lot of space around them. This leads me to…

Third, hanging on the other side of the cooler stacks, is six clusters of two… somethings that each seem to contain four… things. My guess is that these are where the banks of RAM are kept. If that is true, then it would further-suggest that there are six CPUs, each with eight sticks of RAM.

Fourth, there is an extra heatsink right underneath the handle that Jensen used. I do not know exactly what this is, but my guess is that it cools the motherboard’s controller chip. That said, it could also be some form of power delivery.

Either way, you are clearly not going to put this into your gaming machine. I expect that we will find out what exactly it is on Thursday during NVIDIA’s GTC 2020 online keynote.

Middle ground for your media system