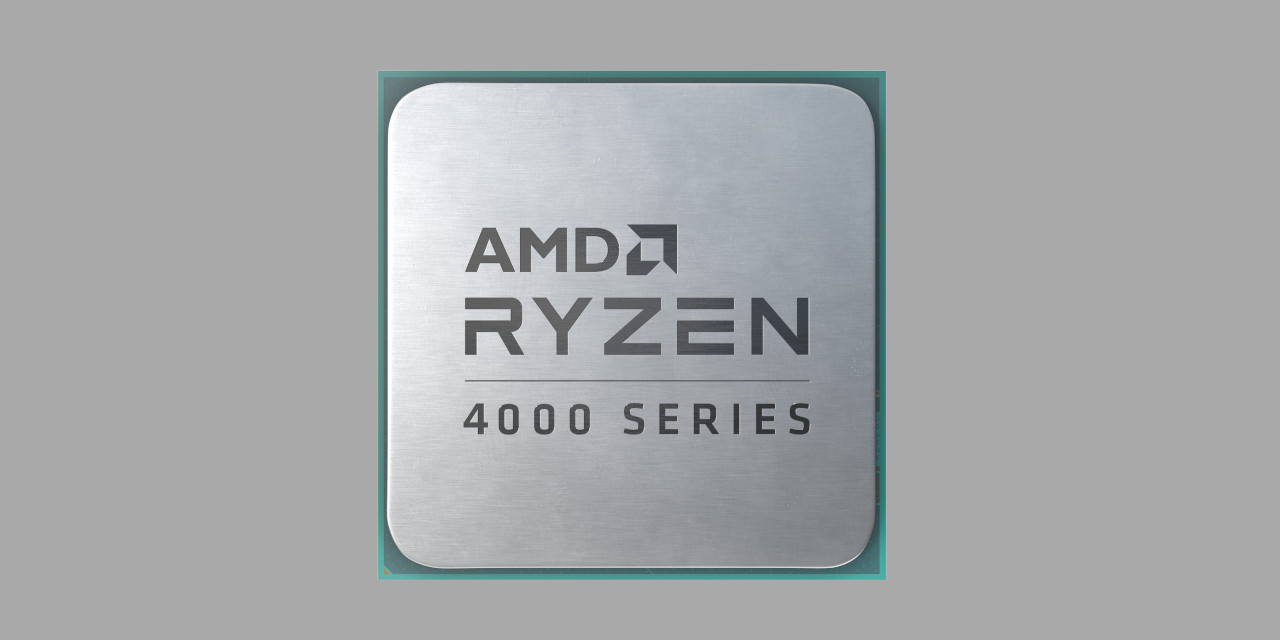 Renoir Introduced As An OEM-Only Product

AMD has announced their Ryzen 4000 G-Series Desktop Processors with Radeon Graphics, with a twist; these are for pre-built OEM systems only. Obviously that aspect of this launch is not going to be enthusiastically received by the DIY community, but AMD is working to make inroads into a much larger market, and one that Intel has obviously dominated for quite some time. 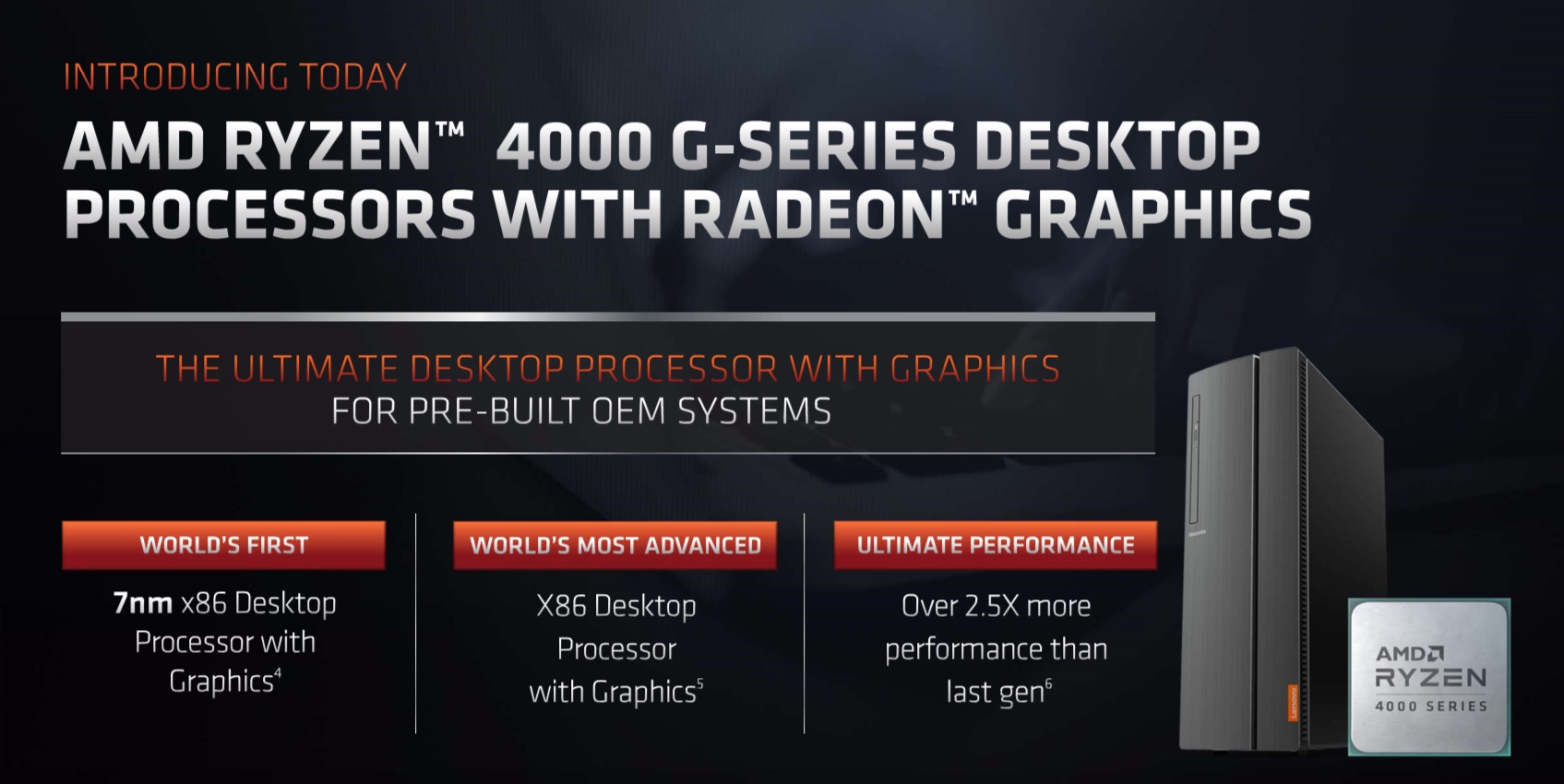 What exactly is on offer from this updated lineup of products once called APUs? First and foremost the processor cores are built with AMD’s 7nm Zen 2 technology, which offers significantly better performance than the previous generation’s Zen+ architecture.

Another difference is one of core count, as these have now doubled at the high end to 8 cores/16 threads, with the previous flagship processor with graphics the 4-core/8-thread Ryzen 5 3400G. 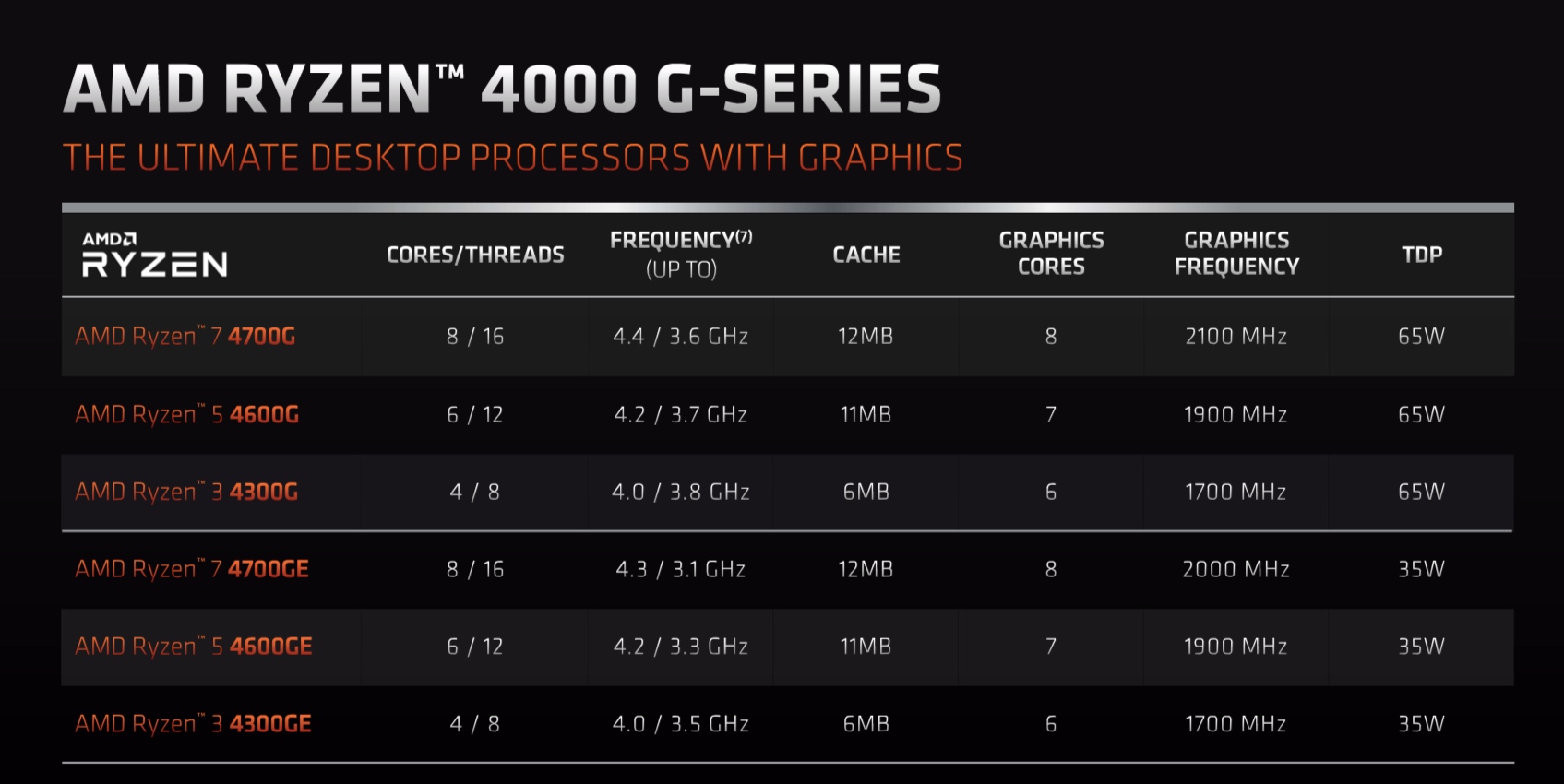 In total there are six Ryzen desktop processors with graphics being introduced today, split between 65W and 35W versions of the new Ryzen 3 4300G, Ryzen 5 4600G, and Ryzen 7 4700G (with the 35W variant differentiated by the “GE” at the end of the product number).

At the top of the chart is that new 8-cores/16-thread option, the AMD Ryzen 7 4700G, with AMD creating a Ryzen 7 APU for the first time. This particular model offers frequencies of up to 4.4 GHz, 8 graphics cores with speeds of up to 2.1 GHz, and a TDP of 65W. 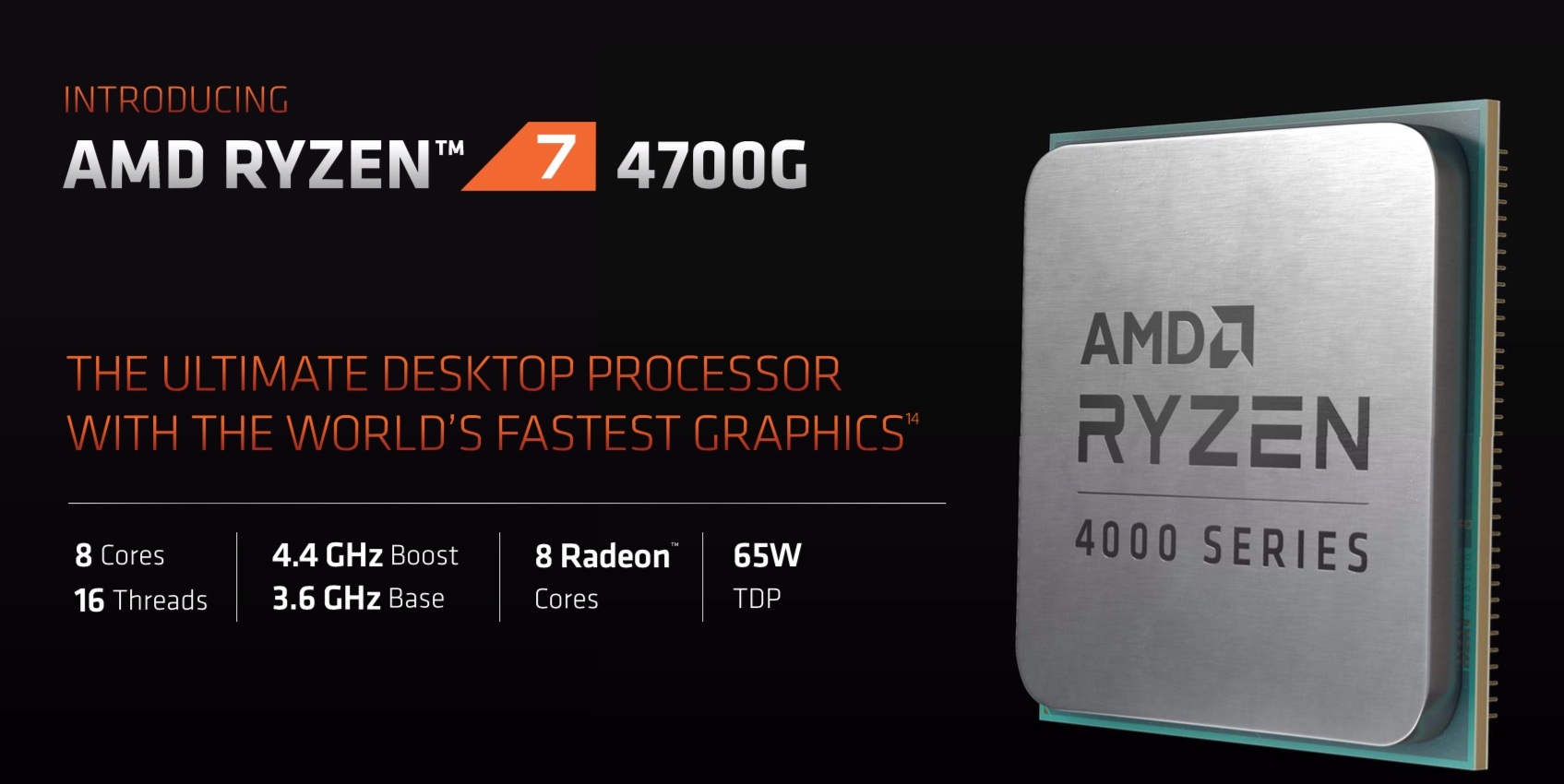 The 35W variant of the 8-core Ryzen 7 APU – the Ryzen 7 4700GE – offers the most compelling low-power desktop solution we have seen from AMD to date, and could certainly offer some intriguing possibilities for small form-factor system configurations.

While this OEM-only announcement was already destined to be disappointing to the enthusiast/DIY community, take heart; these aren’t the Navi APUs you’ve been waiting for. Yes, Vega is back once again, and one the provenance of these new desktop products is known that should come as no surprise.

In creating these new desktop processors, AMD has actually taken the same silicon from their current Ryzen 4000 notebook lineup, and optimized it for the higher TDPs of desktop parts. The end result is not only the Zen 2 performance (and core count) advantage over previous desktop APUs, but significant performance uplift from the Vega GPU cores, as well. 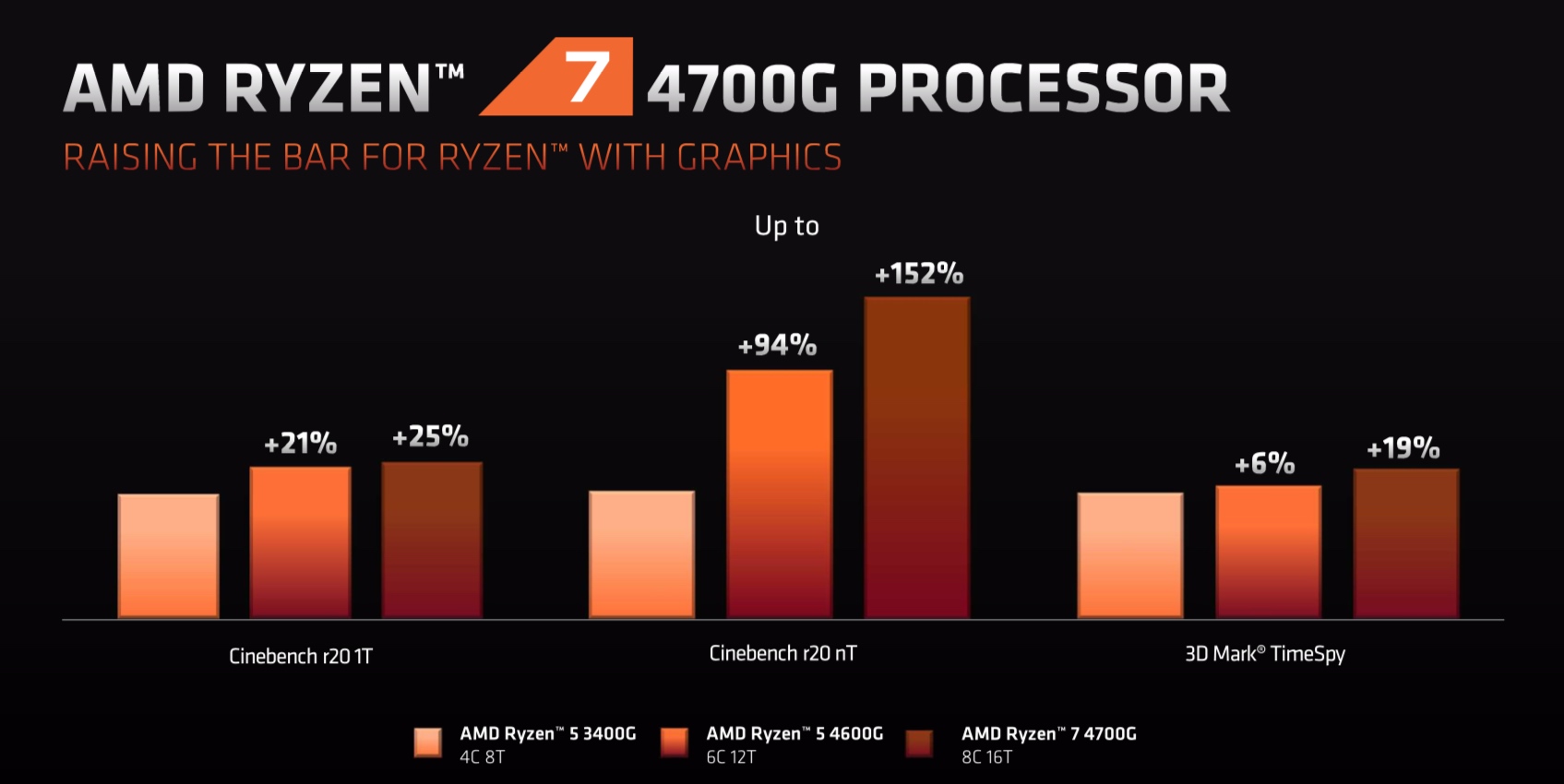 AMD’s performance slides indicate some large increases over the previous high-end Ryzen 5 3400G in the graphics department, though we will of course have to wait for some hands-on time with one of these OEM systems to test out our usual game benchmarks. In any case, AMD is extracting every bit of performance they can from surprisingly few Vega GPU cores this time around (the Ryzen 5 3400G offered 11 Vega cores, for example).

These new Ryzen 4000 G-Series desktop processors will be available from AMD’s OEM partners – with Lenovo and HP the first to be named – beginning in Q3 2020.

Also announced were a trio of new Athlon 3000 processors, which are positioned to compete directly with Intel’s entry-level offerings in the OEM space.

Building on the Ryzen PRO 4000 mobile family, the new desktop versions of these business-focused parts have also been introduced today (along with new Athlon PRO 3000 SKUs).

AMD states that the Ryzen PRO 4000 Series Desktop Processors offer “up to 43% more performance per watt than the competition”, when comparing the Ryzen 7 Pro 4750G to Intel’s Core i7-9700 vPro (using the Cinebench R20 nT benchmark).

The Ryzen PRO 4000 Series Desktop Processors are slated for launch availability from from system integrators, with OEM partner systems available “later this fall”.

Grilling Intel on Penryn and Nehalem