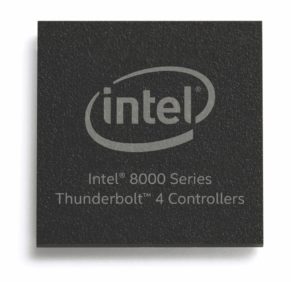 Thunderbolt is getting a new version and Intel has chosen to take a path completely opposite to that which the USB-IF did; instead of adding a ridiculous amount of syllables at the end to specify what version of connection you have Intel have chosen to use Thunderbolt again, with no indication of generation.

The new generation will guarantee support for cables of up to 2 meters and you will see devices with up to four Thunderbolt ports.  That is a good thing, as in order to be licensed to use Thunderbolt 4 at least one of those ports is required to be able to charge the device.  Your devices will also have to be set to wake when plugged into a dock, which may upset some security minded folks.   One thing you will not have to worry about is compatibility, the spec requires backwards support for all USB and Thunderbolt 3 connections assuming they are physically compatible.

The big surprise is the announced requirement for Intel VT-d-based direct memory access (DMA) protection.  This raises questions about support not just for AMD systems but also Apple, who do not tend to support this virtualisation technology currently and anyone who wants to use it will need additional software and infrastructure to support it.  This also raises questions about the new generation of Apple products which are moving away from Intel silicon.  At this time we haven’t received much information from AMD nor Apple, at least in AMD’s case they are suggesting you talk to the company that released the specs.

This announcement is unlikely to be the cause of NVIDIA’s stock prices eclipsing Intel’s in the USA, which you can read about in the first link below.

While it won't offer an increase over the 40GB/s that Thunderbolt 3 does, Thunderbolt 4 has steeper minimum requirements than Thunderbolt 3 for devices to claim certification—and that makes some new features and perks standard.

Got questions? We’ve got answers to spare!