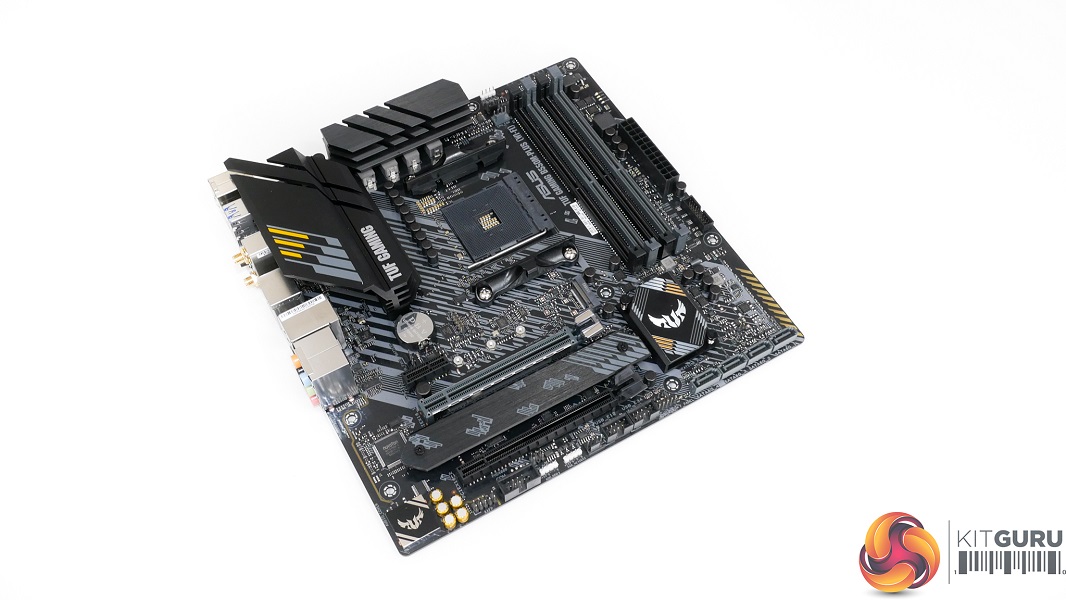 An mATX Solution From ASUS  TUF, The Gaming B550M-Plus

If you like tiny Ryzen systems and for whatever reason are looking for something other than an ASRock micro-ATX solution you can check out Kitguru’s review of the ASUS TUF Gaming B550M-Plus.  ASUS did not skimp on the power systems, with 8+2 DrMOS power stages and Digi+ VRMs along with a pair of sizable VRM heatsinks.  There are some features which have been removed from this $160 motherboard such as no internal USB Type-C header, nor voltage check points, nor onboard power and reset buttons.  That is not uncommon for boards of this size and price but you should be aware of this if you prefer boards which sport them.

There is still plenty on this motherboard, such as two bandwidth independent SATA compatible M.2 ports one PCIe 4.0 x4 and one PCIe 3.0 x4 and four SATA ports for older storage.  There is a full PCIe 4.0 16x slot as well as two other PCIe 3.0 slots, one of which is also full length, which can be run in either x0/x4 or x1/x2, depending on your needs.

The back panel includes two 10Gbps USB 3.2 Gen 2 ports, one of which is a Type-C, as well as four 5Gbps USB 3.0 Type-As and a pair of USB 2.0 as well.  Network connectivity includes 802.11ax, Bluetooth and even 2.5GbE wired connectivity while your APU can send signal via Displayport 1.2 or HDMI 2.1.

Kitguru found much to like about the board but also negatives, some common to lower cost ASUS motherboards while others specific to the TUF Gaming B550M-Plus which you should read about if you are shopping around for a micro-ATX board.

B550 and micro-ATX seem to go hand-in-hand, especially given the scarcity of quality X570 micro-ATX offerings. We are examining the ASUS TUF-Gaming B550M-Plus (Wi-Fi) motherboard that features dual M.2 connectors, 10Gbps USB 3.2 Gen 2, and 802.11AX WiFi.

“I look forward to welcoming Motorolans to our family of Googlers”