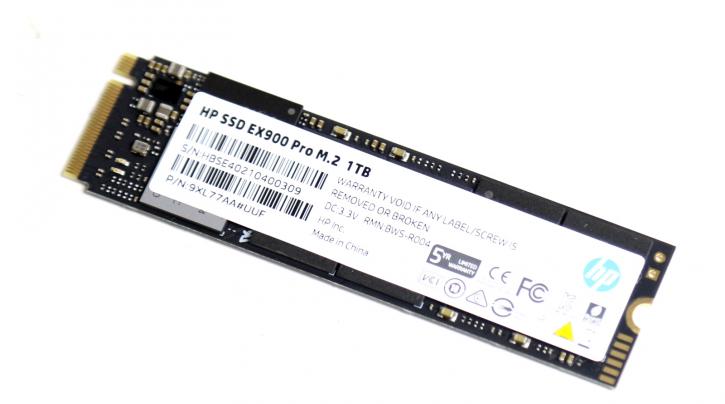 The HP EX900 PRO 1TB NVMe SSD is up for review over at Kitguru, a M.2 2280 NVMe SSD of the familiar PCIe 3.0 variety.  These particular tests were run on an X570 board with a Ryzen 7 3800X handling the heavy lifting.  The SSD ships without a heatsink and the measured 61C under heavy load suggests it really isn’t needed, though you won’t suffer if you happen to have a motherboard which provides M.2 heatsinks.

The price is just a hair over 12 cents per gig, decent for an NVMe SSD but still in violation of Ryan’s Law.  All drives in this family come with a five year warranty, the 1TB has a lifetime of 650 TBW so it should be with you for a while.  The performance is also good, sitting happily in the 2GB/second range for reads and writes, with no sign of slowdown due to a full cache.

As you can see in their inclusive benchmark tables there is not much difference in performance between this level of NVMe SSD, the controllers are very similar, TLC is pretty much TLC and four lanes of PCIe 3.0 offers the same bandwidth regardless of the platform.  This makes price the largest deciding factor for many, so take a look through the charts to see which drives you should be tracking the price of.

HP has released a new M.2. SSD in the value series, the new EX900 Pro is an SSD in that 2 GB/sec range, the rather properly volume sized 1024 GB (1TB) model which we review certainly is a capable one with no TLC write holes to detect.