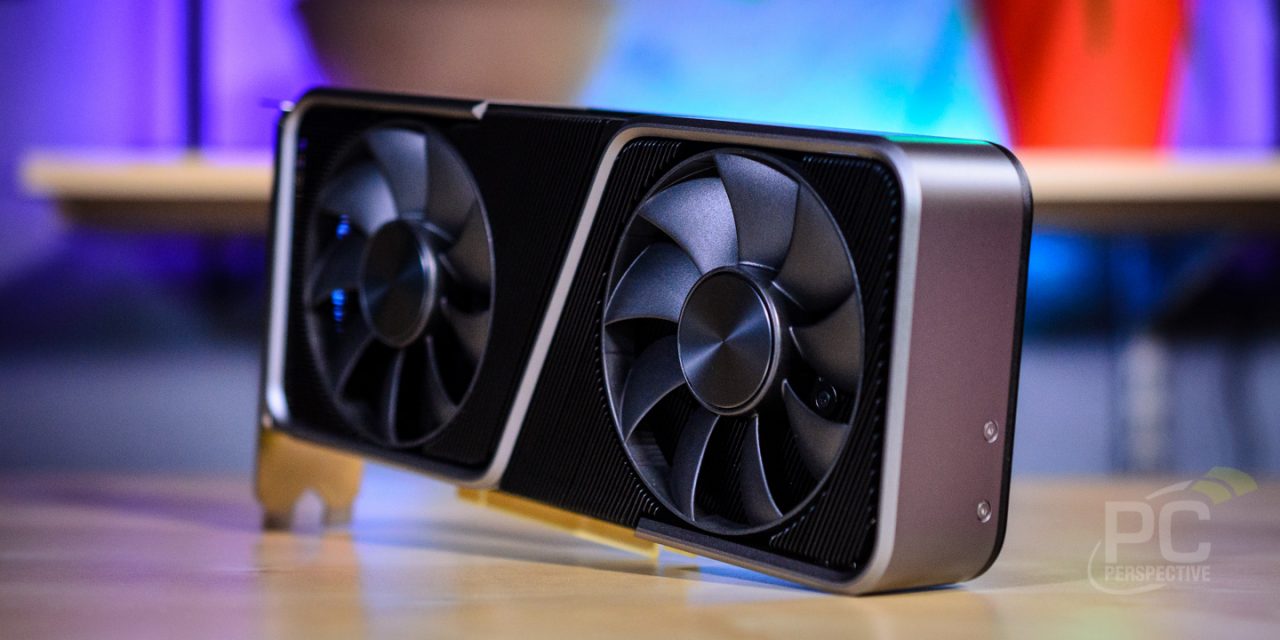 The wait is over. The review embargo for NVIDIA’s GeForce RTX 3070 Founders Edition is up today, and when the dust settles from reviews around the web (and the ‘Tube) we will know how close to an RTX 2080 Ti this $499 graphic card can get. (Spoiler: this will vary depending on the game and use of RTX features.)

The second entry in the consumer Ampere GPU lineup after the GeForce RTX 3080, the new GeForce RTX 3070 was originally planned for an October 15 launch, but NVIDIA pushed this back a couple of weeks to October 29.

It could be speculated that this intentionally precedes AMD’s Radeon RX 6000 event by one day, but it could also allow for significantly better availability for the new GPU (we don’t really have to mention RTX 3080 availability woes, do we?).

As a smaller GPU manufactured on the same custom 8nm Samsung process, there will naturally be fewer Streaming Multiprocessors (SM), and therefore fewer CUDA Cores. The RTX 3080 has an SM count of 68, while the RTX 3070 is equipped with 46.

From the table above you may notice a big difference in memory technology between RTX 3080 and this RTX 3070, as the latter employs 8GB of conventional GDDR6 on a 256-bit bus, while the former implements 10GB of much faster 19 Gbps GDDR6X on a 320-bit bus.

A smaller, lighter card compared the RTX 3080 Founders Edition, this new 3070 FE design is a beautiful piece of industrial design (in this editor’s opinion). I mean, just look at it! 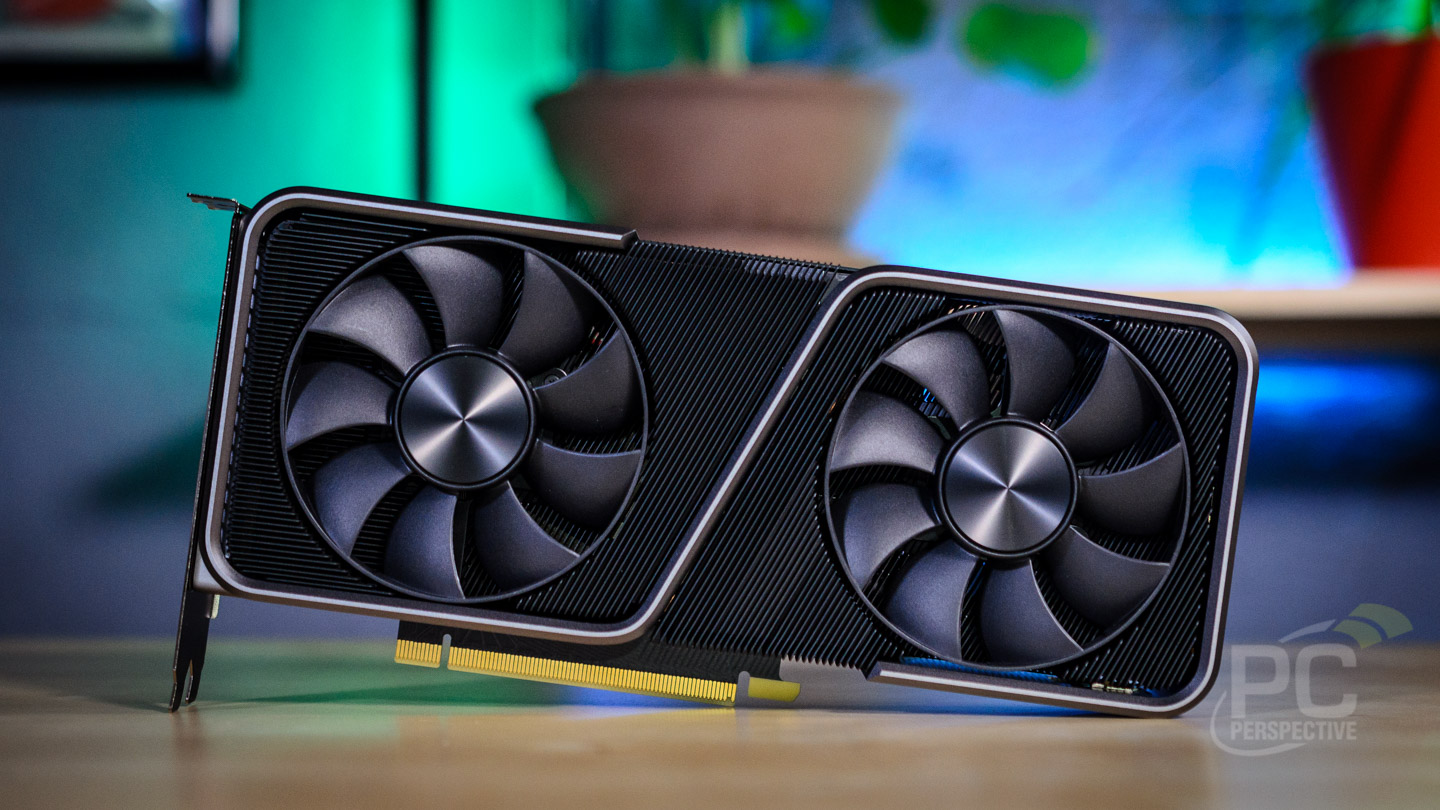 It is also a more conventional design compared to the RTX 3080 Founders Edition, as both fans are positioned on the same side this time – though there is still a passthrough heatsink to the right of the PCB. 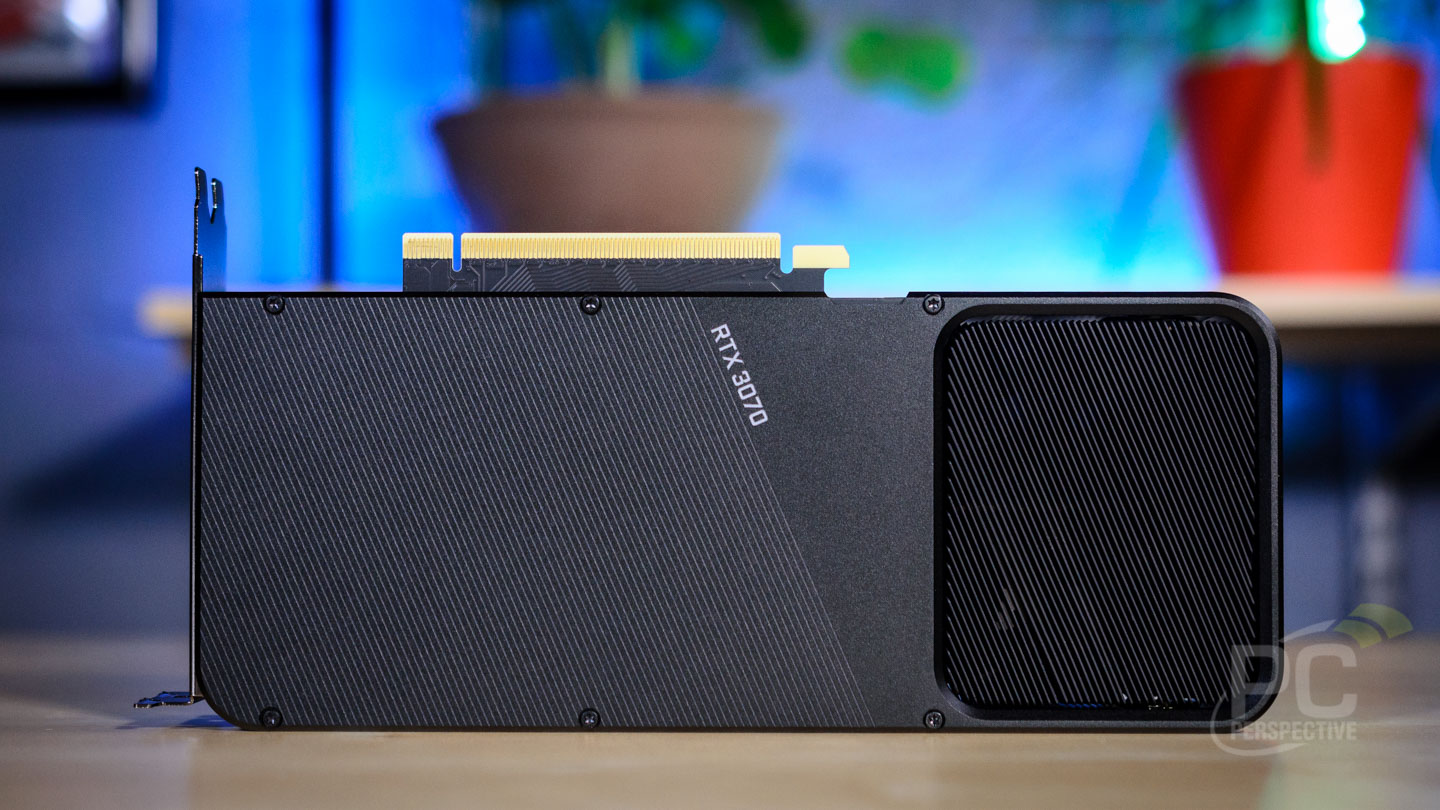 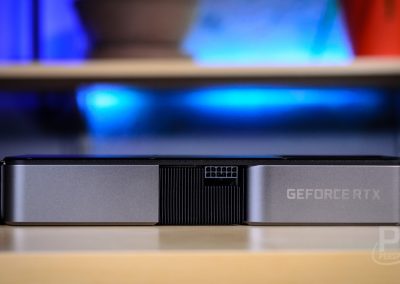 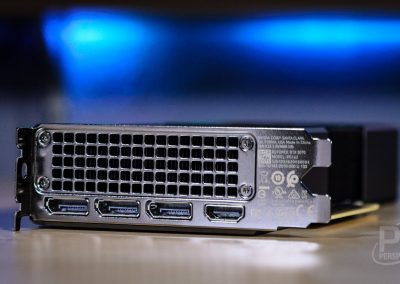 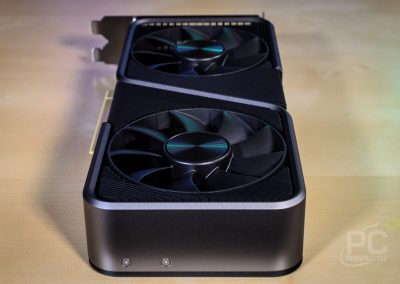 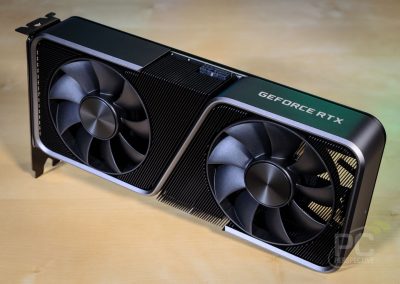 The RTX 3070 Founders Edition makes use of the same compact 12-pin power connection that we saw with the 3080 FE, but this time the power requirements are much lower as the GPU can be powered with a single 8-pin PCIe connector (more on power draw later).

The following benchmarks will look familiar if you read the previous RTX 3080 Founders Edition review, wherein I freely admitted that the selection of games leaves quite a bit to be desired. However, the game benchmark suite being in need of an overhaul is not the topic today, as ultimately we want to present a picture of how the RTX 3070 FE stacks up against the RTX 2080 Ti.

Why the 2080 Ti, you ask? Simple. This was the performance level that NVIDIA had showcased during the announcement event back on September 1st, and if this card comes close, that will be quite an achievement given the price delta between those two cards. 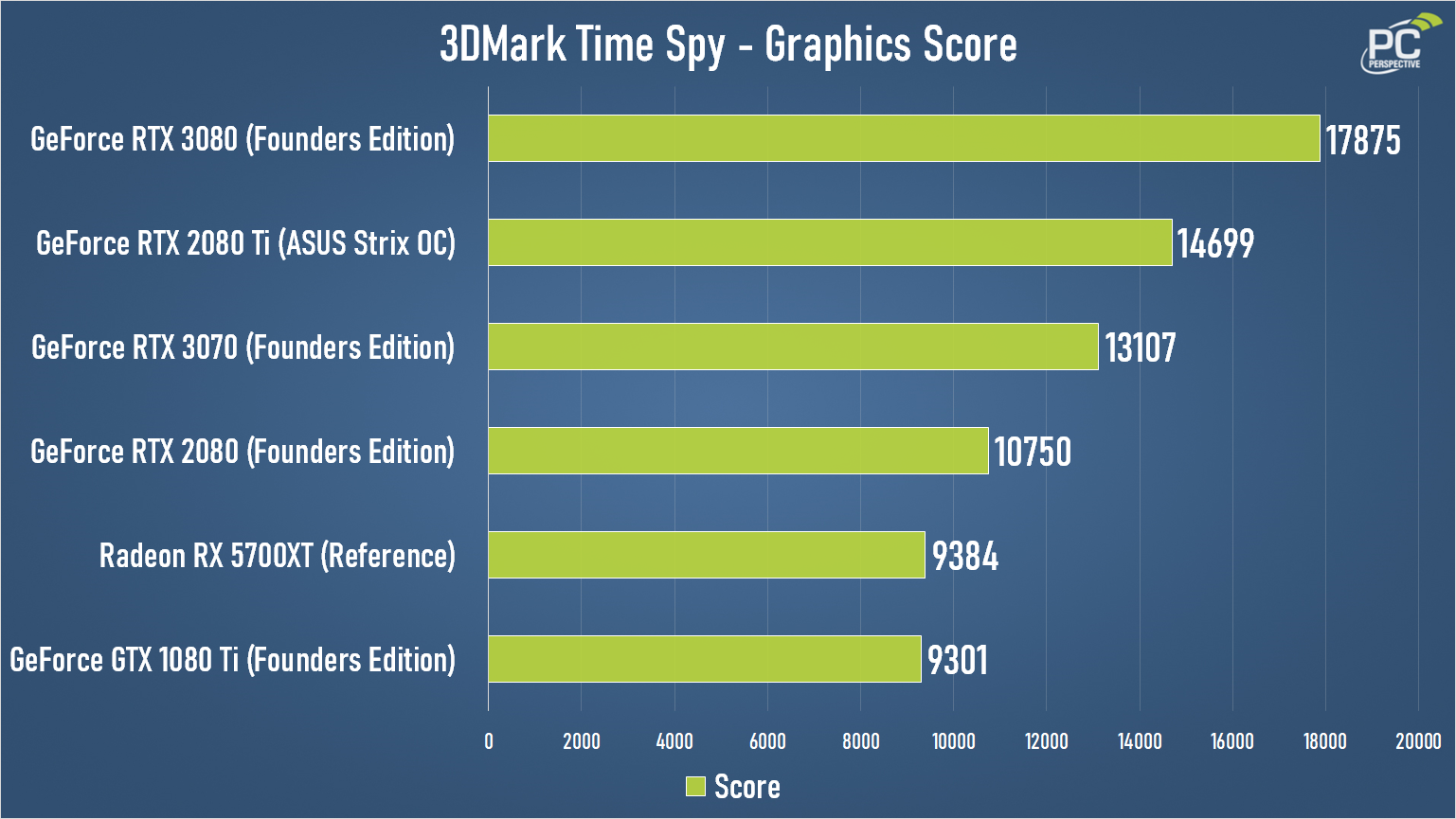 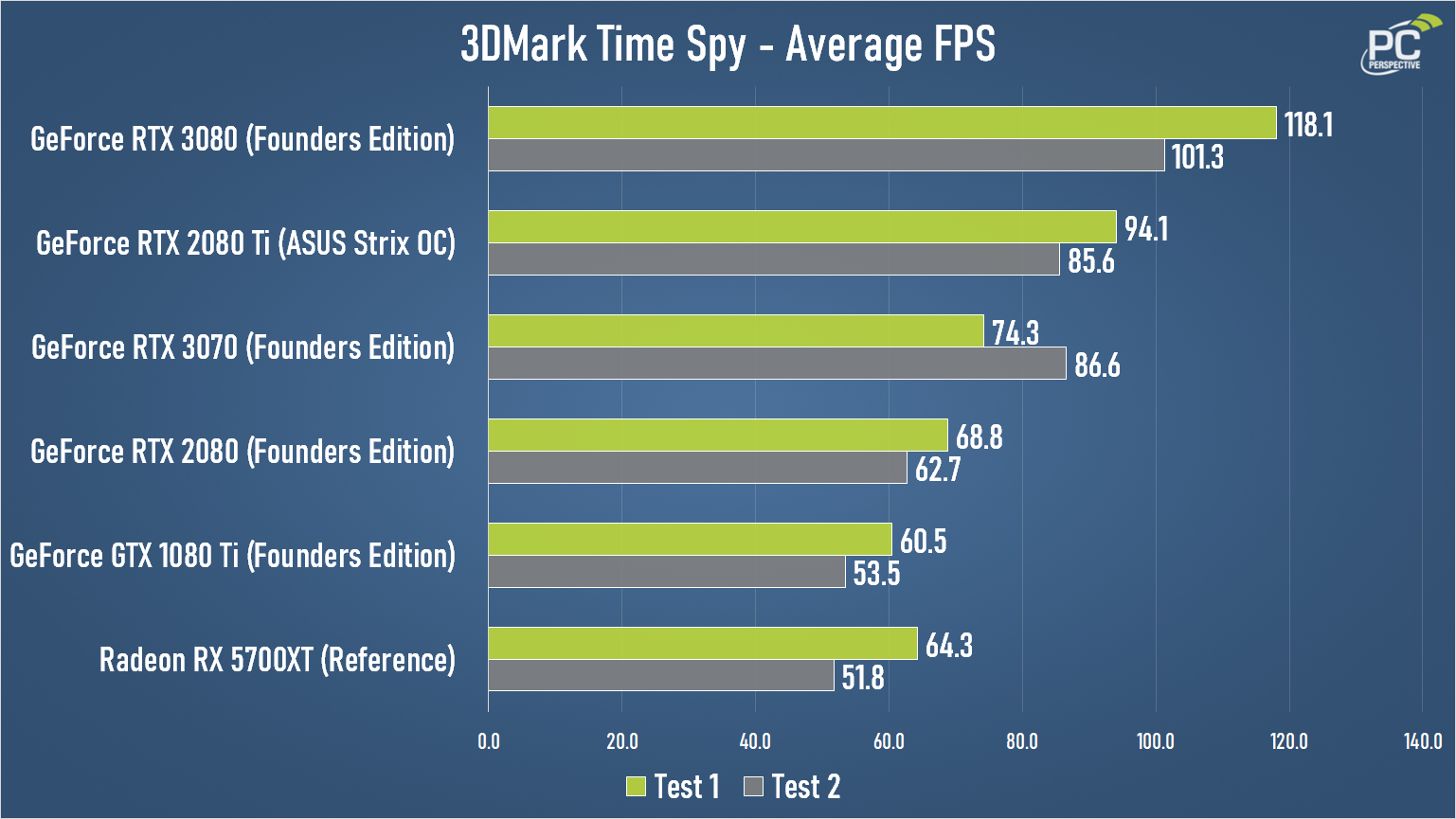 Next we check out results from the 3840×2160 resolution Time Spy Extreme test: 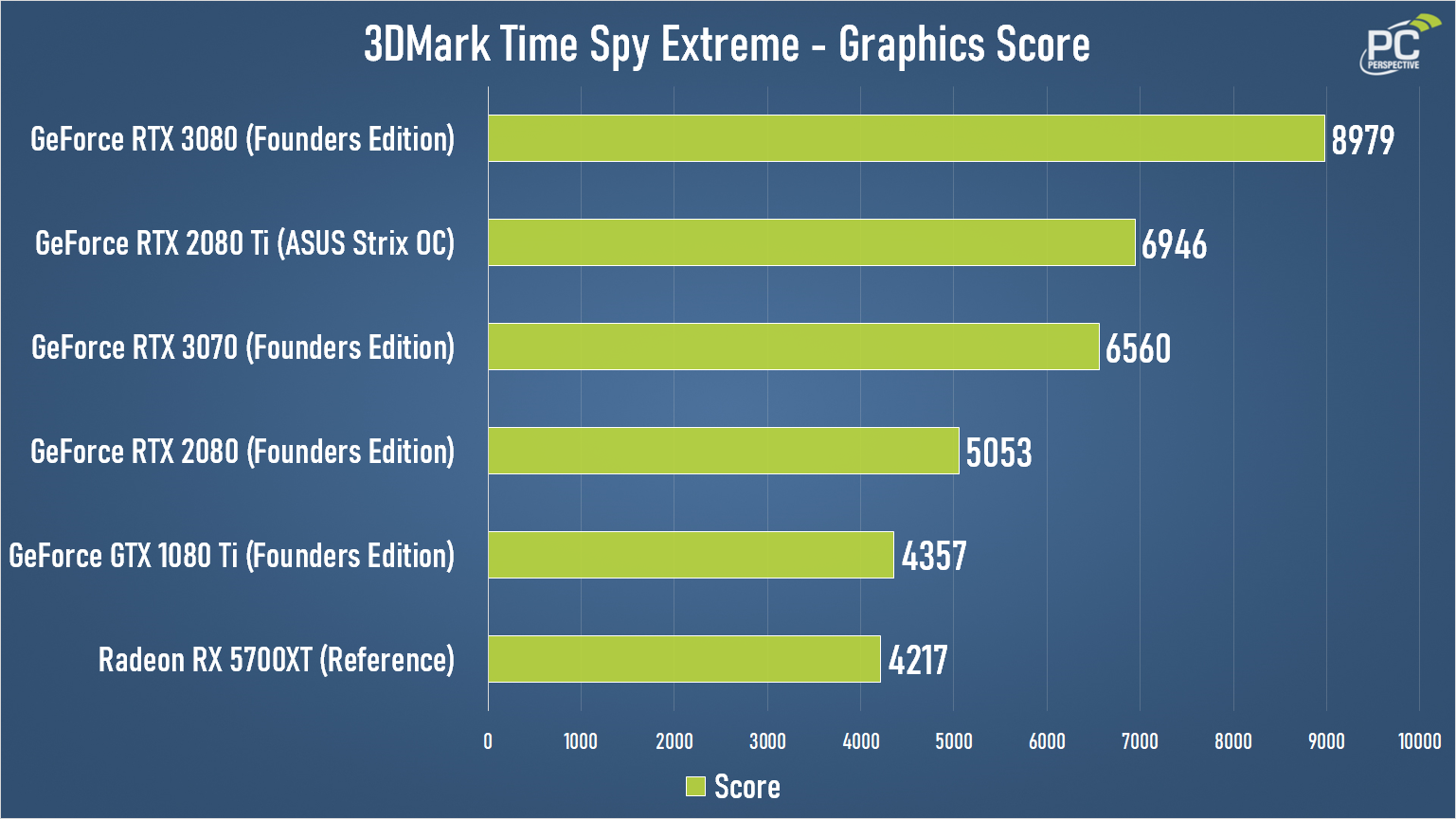 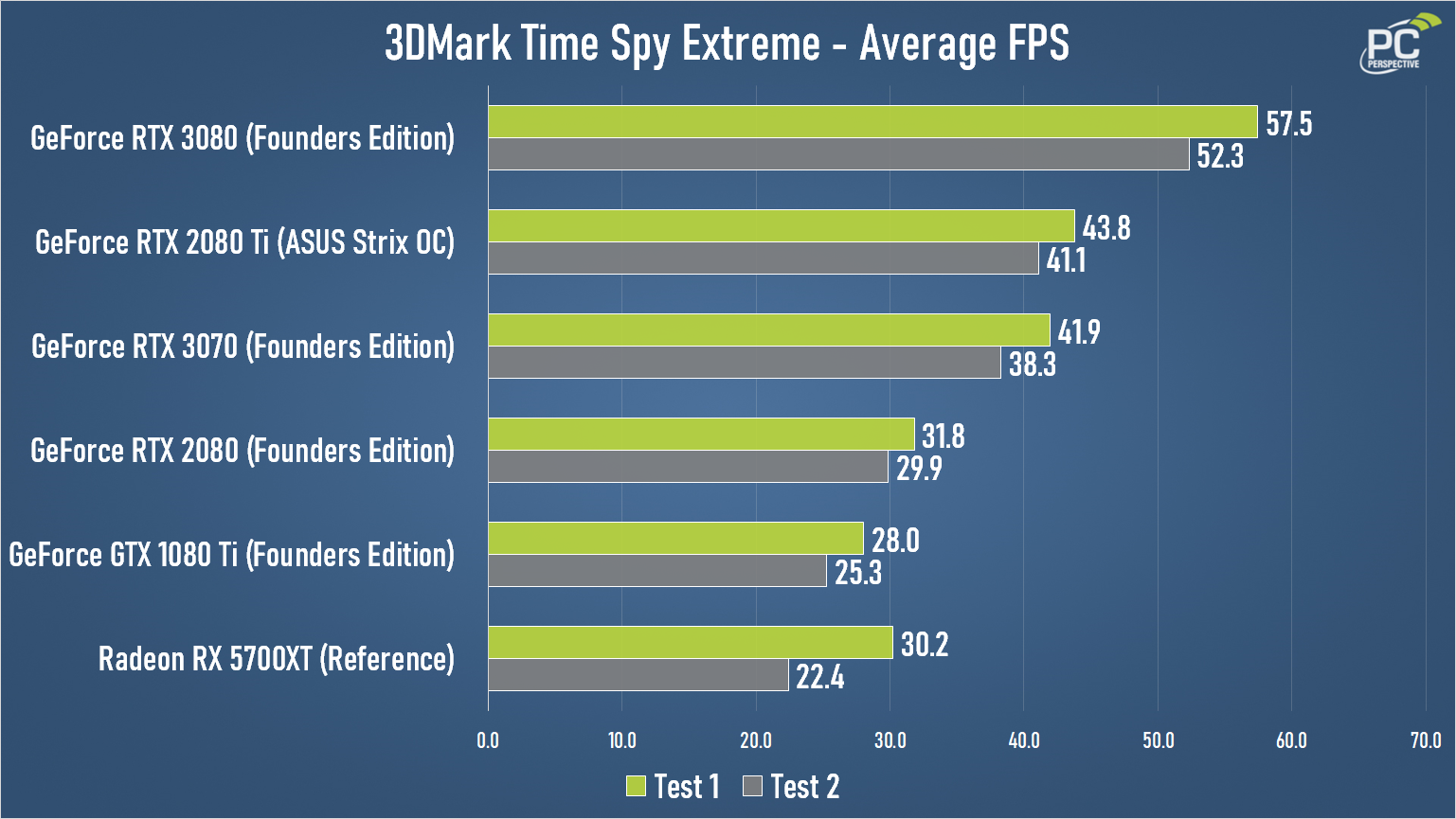 Our first actual game benchmark is quite challenging even at its “high” preset setting (with ultra and extreme lurking above, just waiting to destroy frame rates). Here Metro Exodus was run using the DirectX 12 API at both 2560×1440 and 3840×2160 resolutions. 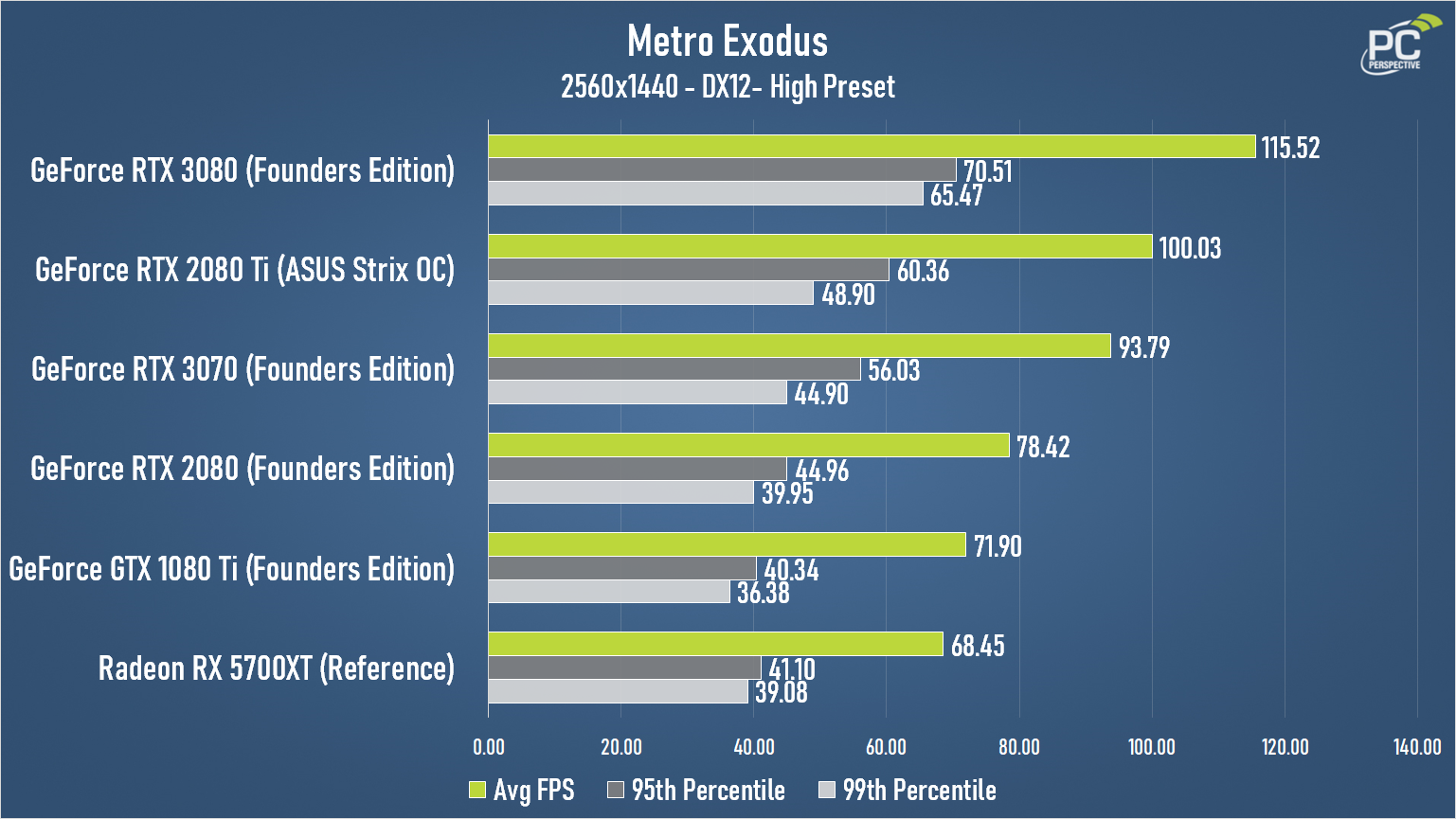 Next we have results at 4K: 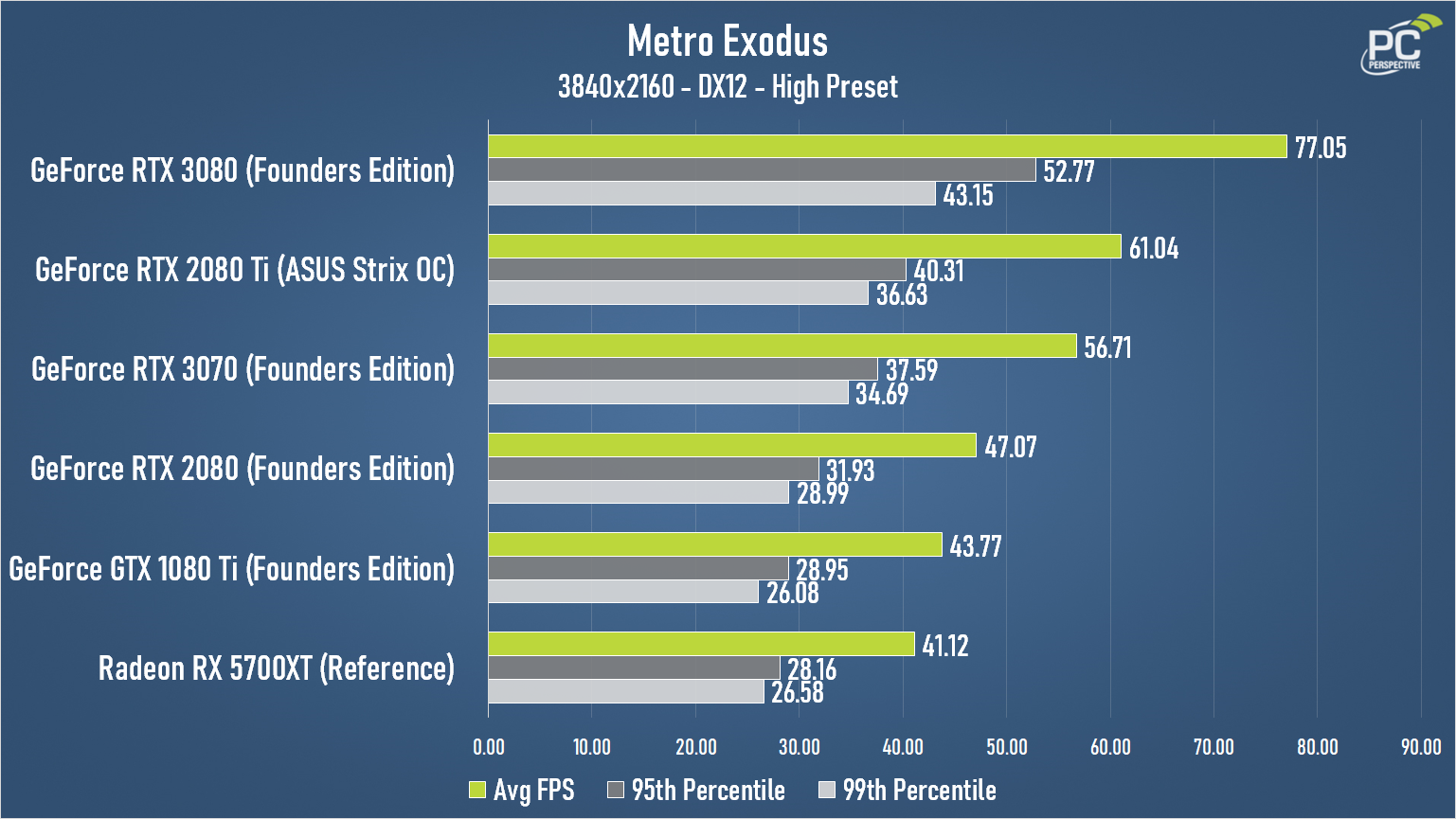 Of course this is just one DX12 benchmark, and we must move on. 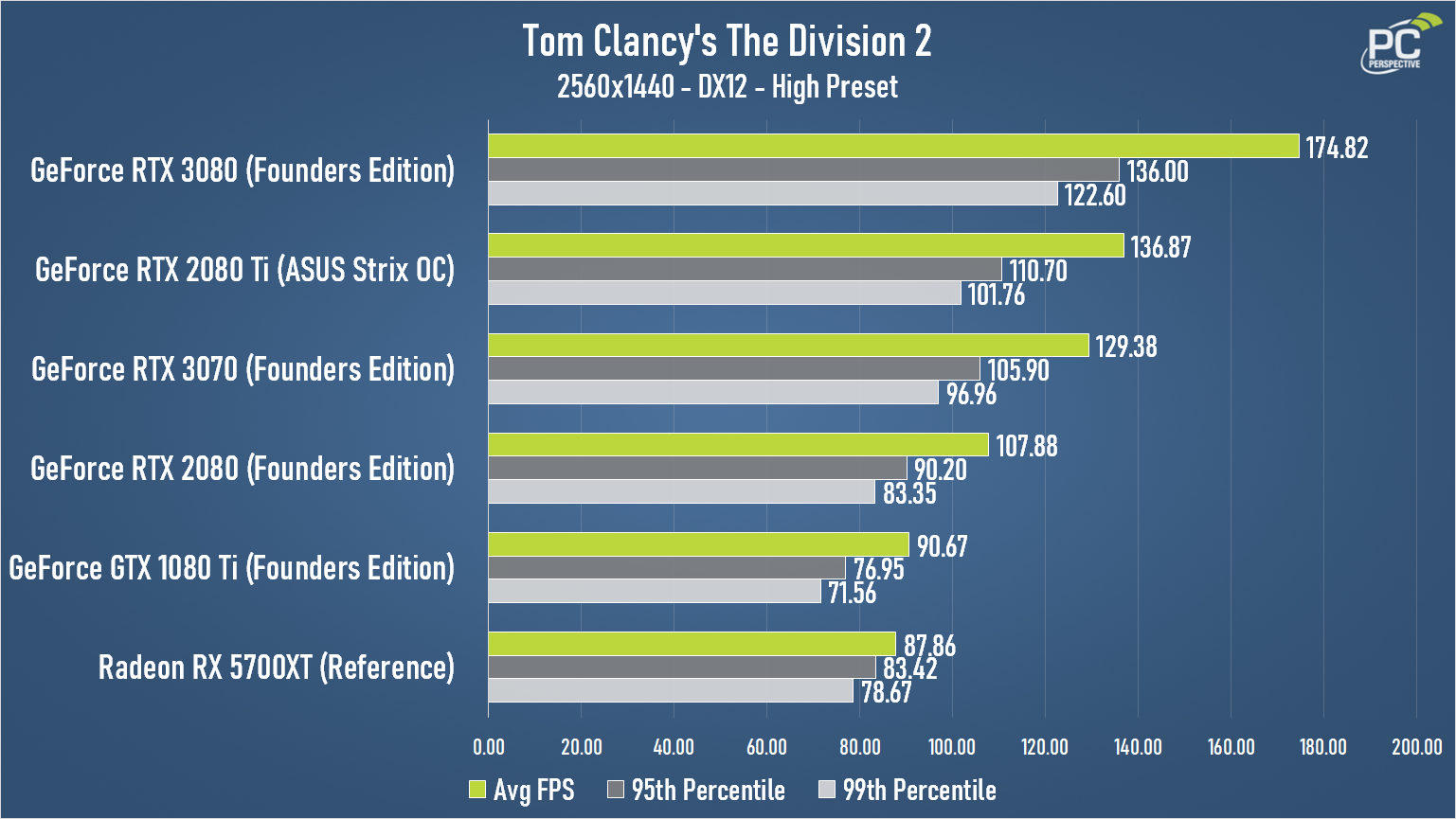 Next we look at the 4K result, again using the “high” preset: 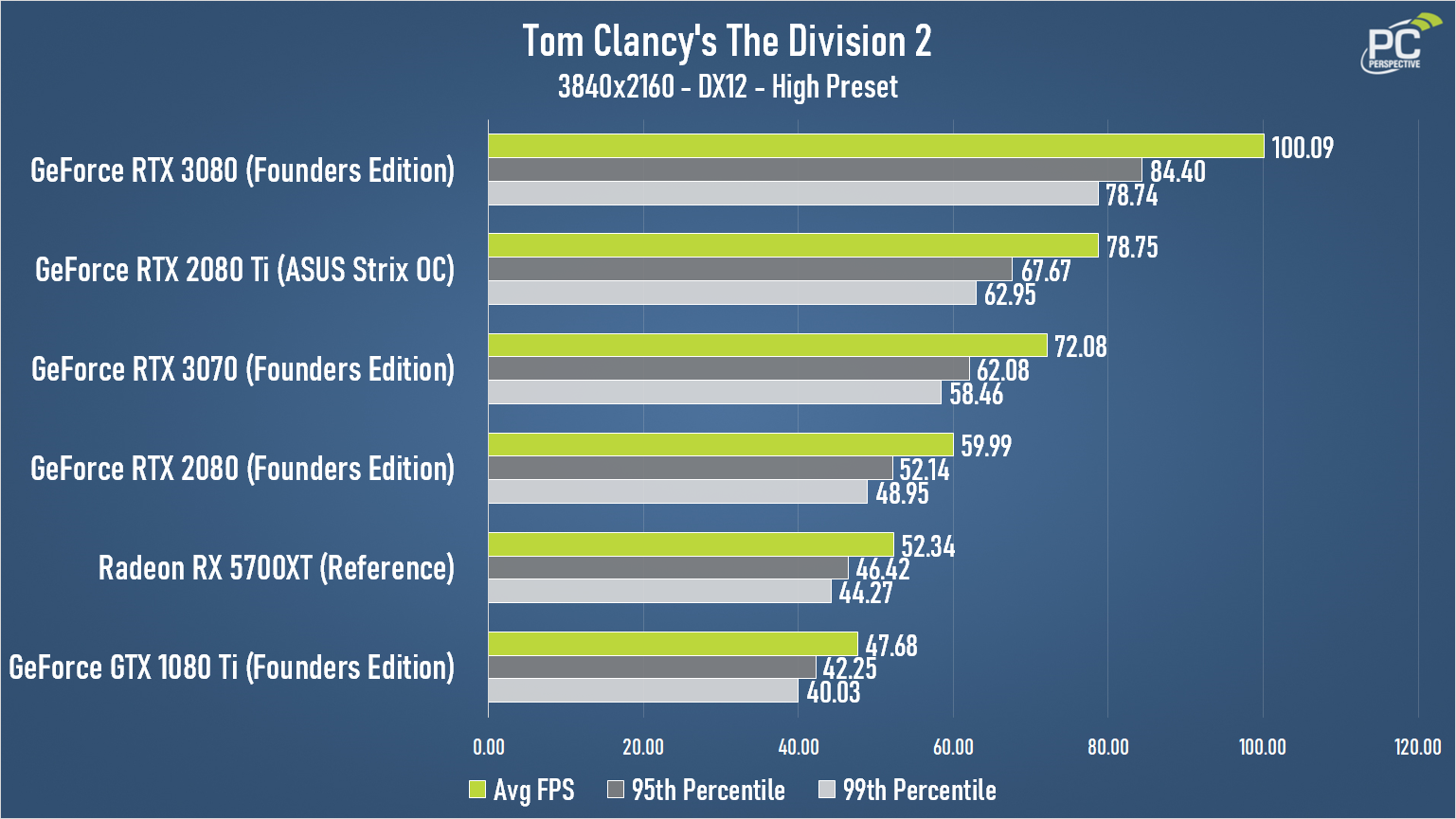 Far Cry 5 is a DX11 game that is getting a little long in the tooth at this point, but when run at the “ultra” preset with HD textures enabled it is a fairly challenging test – at 4K, anyhow. 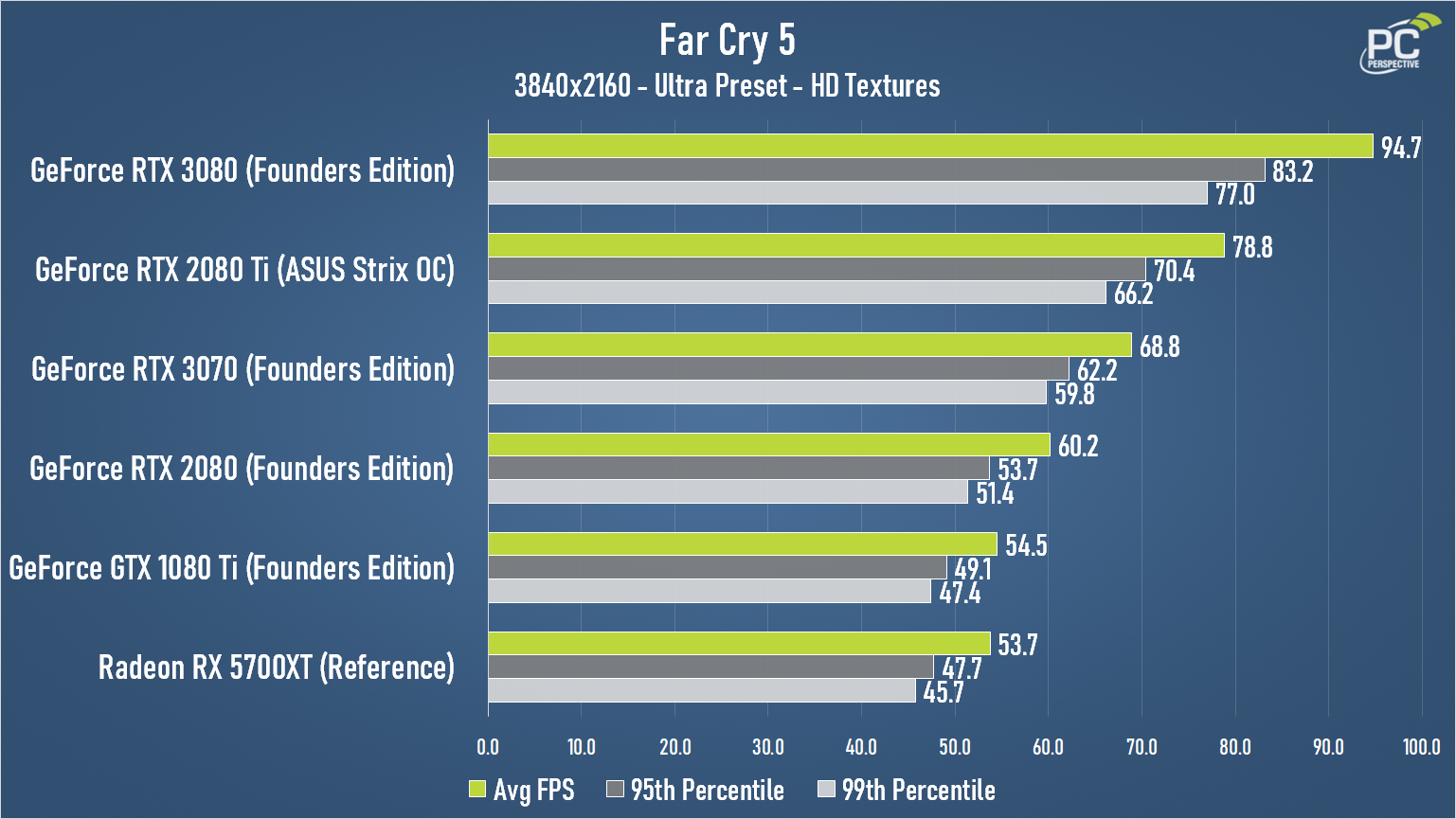 This RTX-infused test showcases Bright Memory Infinite, an in-development follow up (still listed as “TBD”) to Bright Memory that currently exists only as a benchmark. It is quite beautiful, and remains the most challenging 2560×1440 test I’ve found to date when set to its highest preset.

Here we will look first at non-DLSS and then DLSS “Quality” preset results, each run at the highest “very high” RTX setting at 2560×1440 resolution: 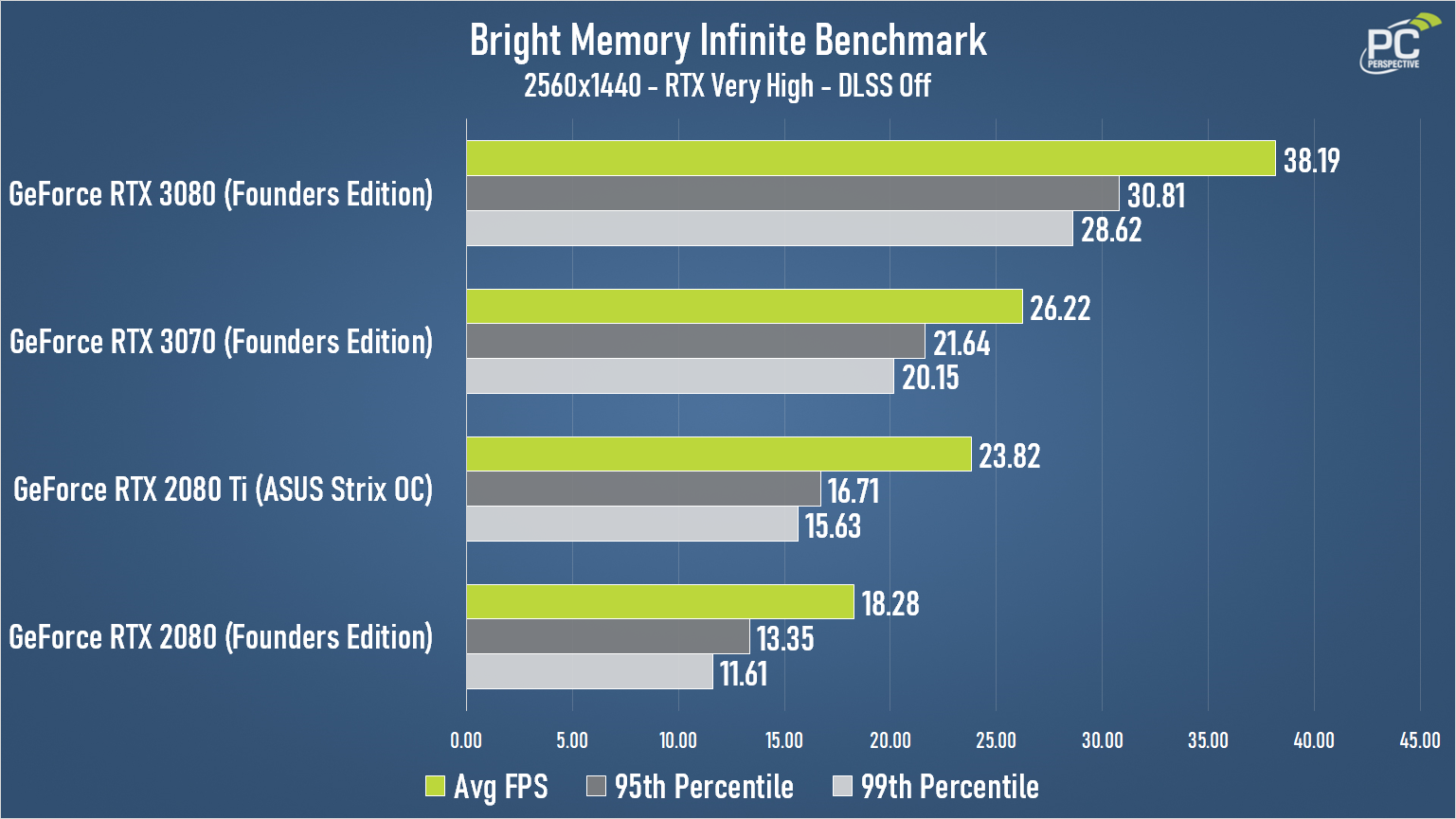 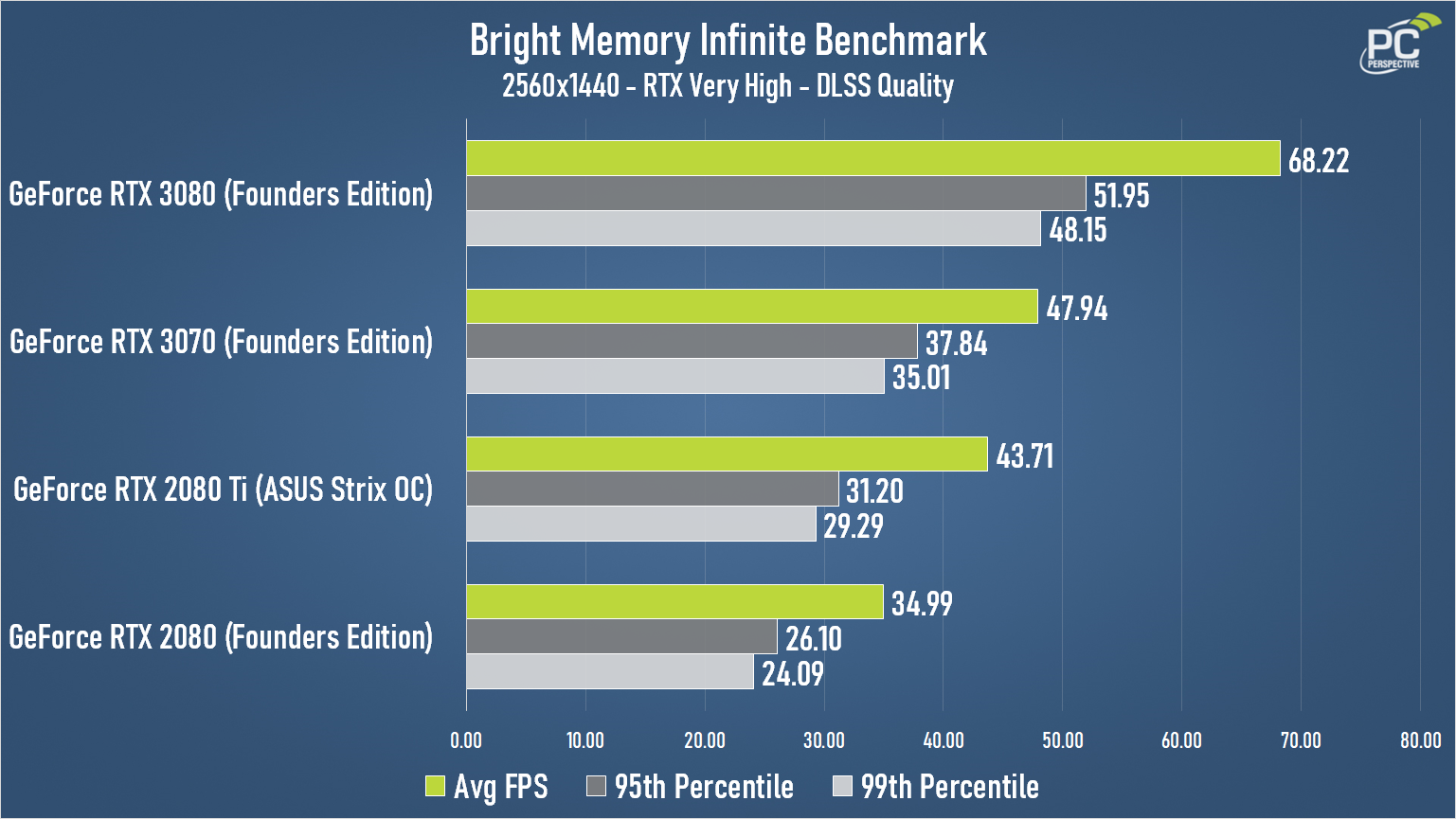 Just like Bright Memory Infinite, Boundary RTX is a standalone benchmark from a game still in development. Still, it’s a good test of DLSS-enabled RTX eye candy, and it was run at 2560×1440 with the “Quality” preset toggled: 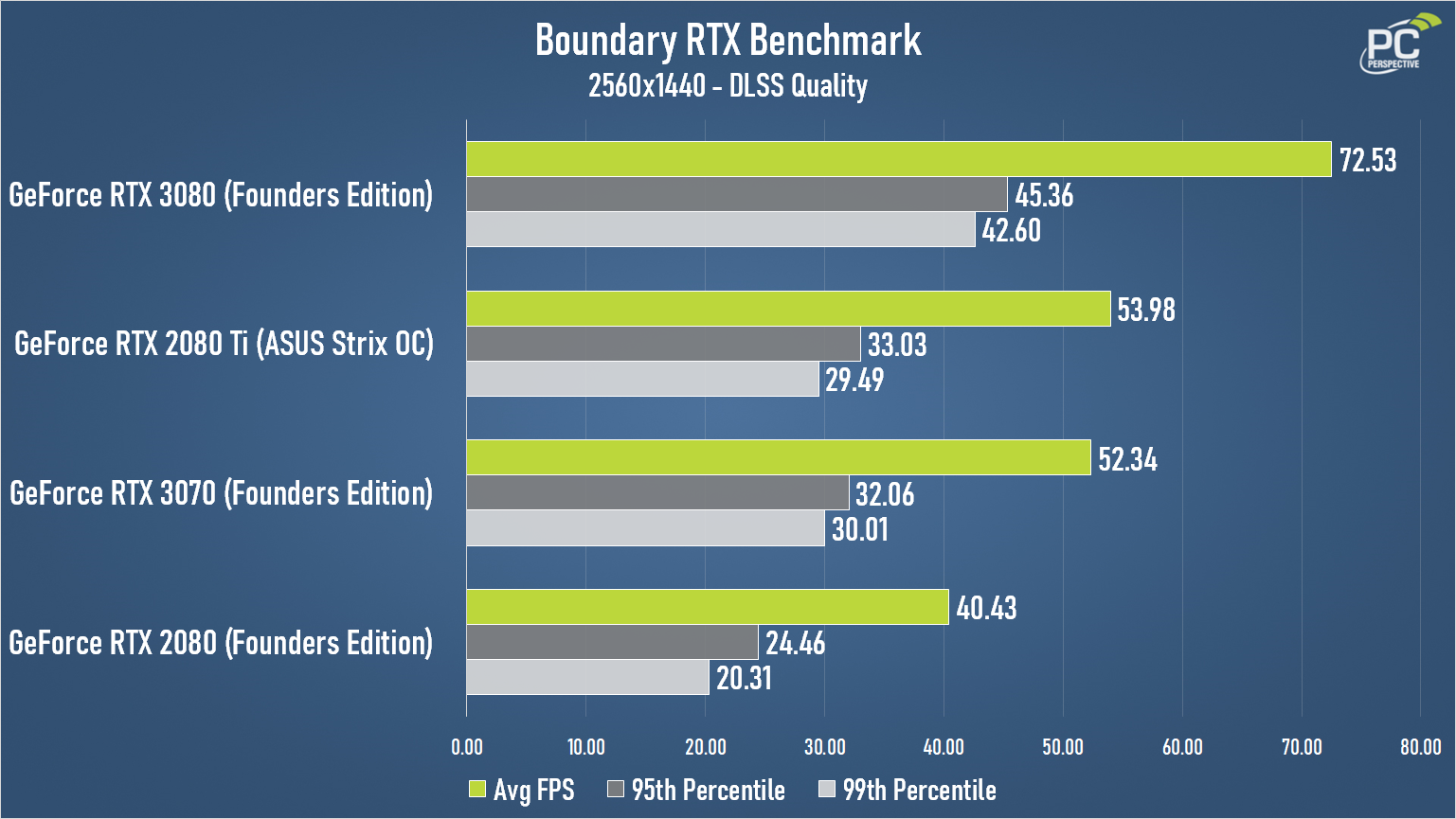 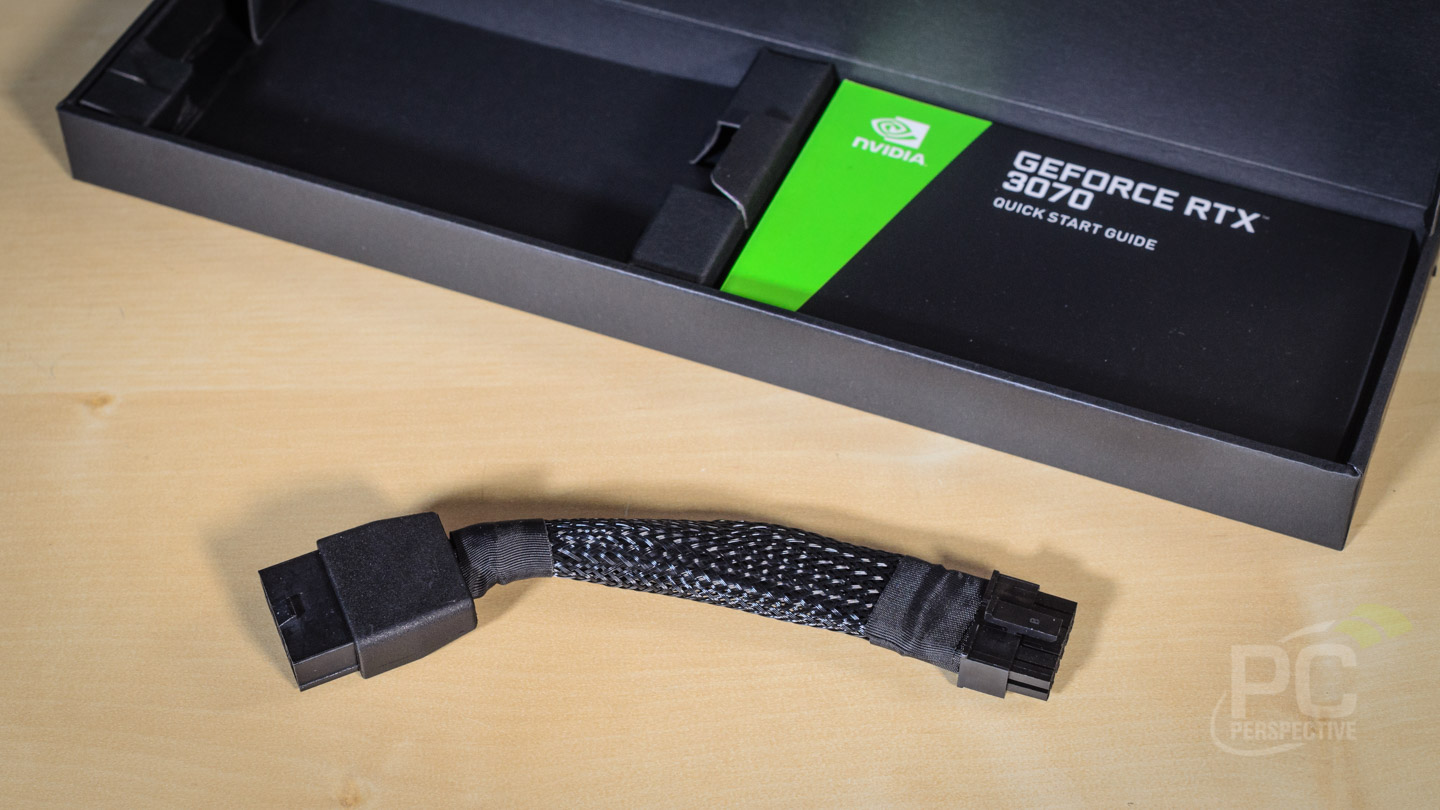 Here’s a look at total board power draw from these two 30 Series Founders Edition cards under identical loads: 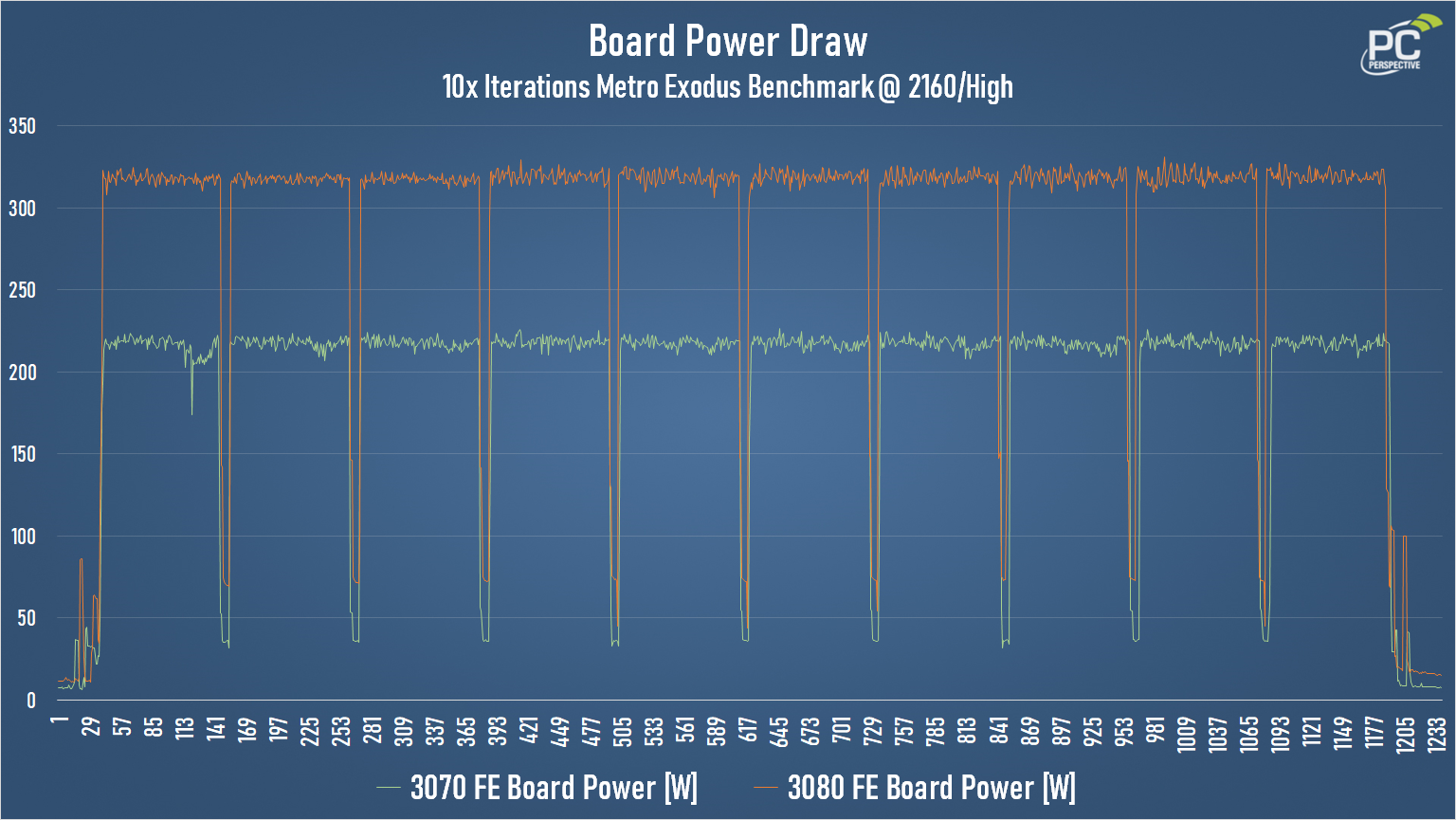 Total system power from our GPU test platform is next, measured at the wall using a Watts Up Pro power meter: 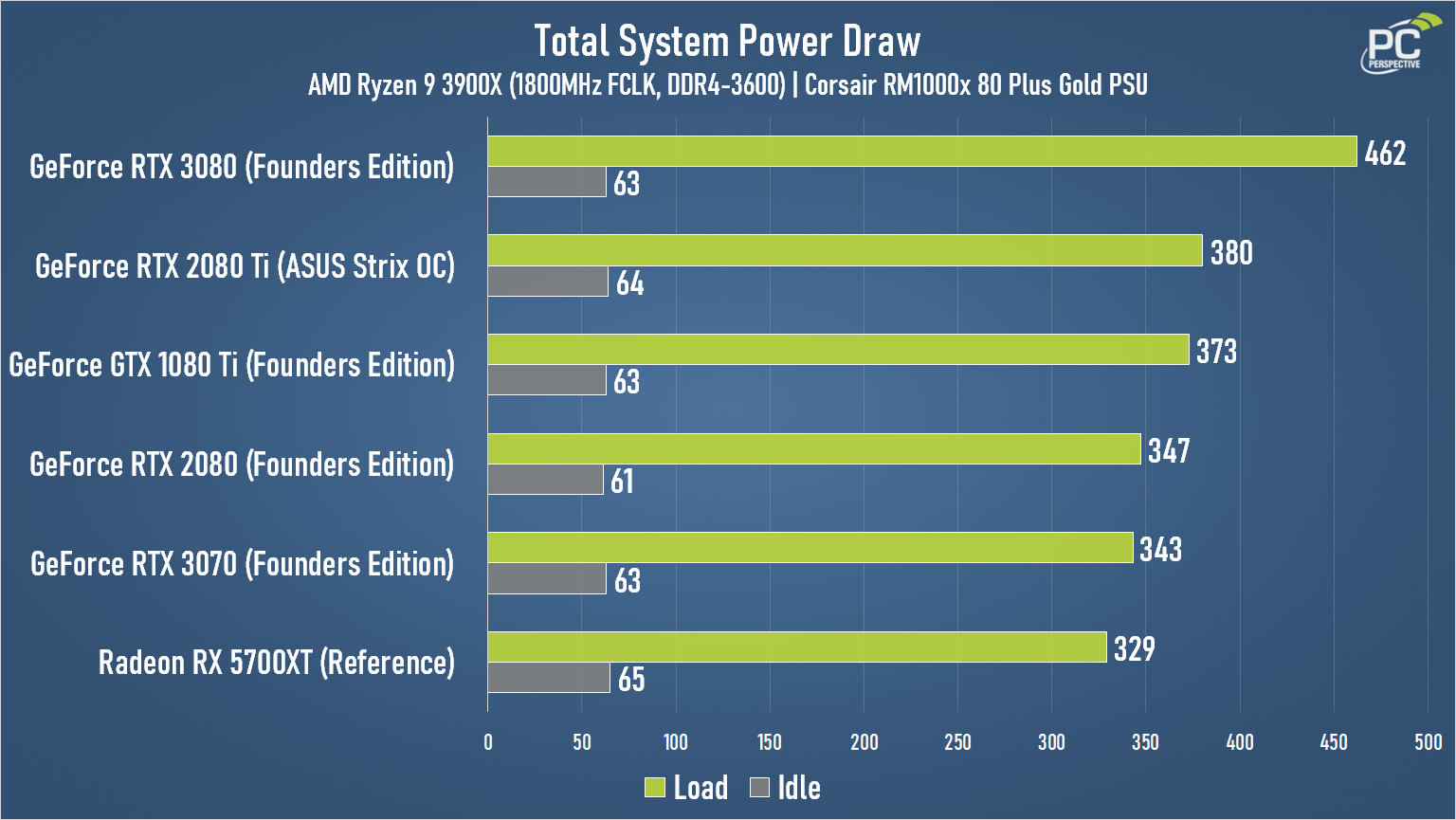 These results speak for themselves. The RTX 3070 Founders Edition consumes less power under load than our RTX 2080 FE, and offers performance closer to our aftermarket RTX 2080 Ti. A total system draw of 343 W with a 10-core CPU in a gaming load is very impressive, to say the least. Part of this low draw is the Ryzen effect, but still.

The RTX 3070 will be much, much easier to deploy than the RTX 3080 given its smaller size and significantly lower power draw (~100W below the 3080 FE), which should make this the go-to high performance small form-factor GPU in the current NVIDIA lineup. 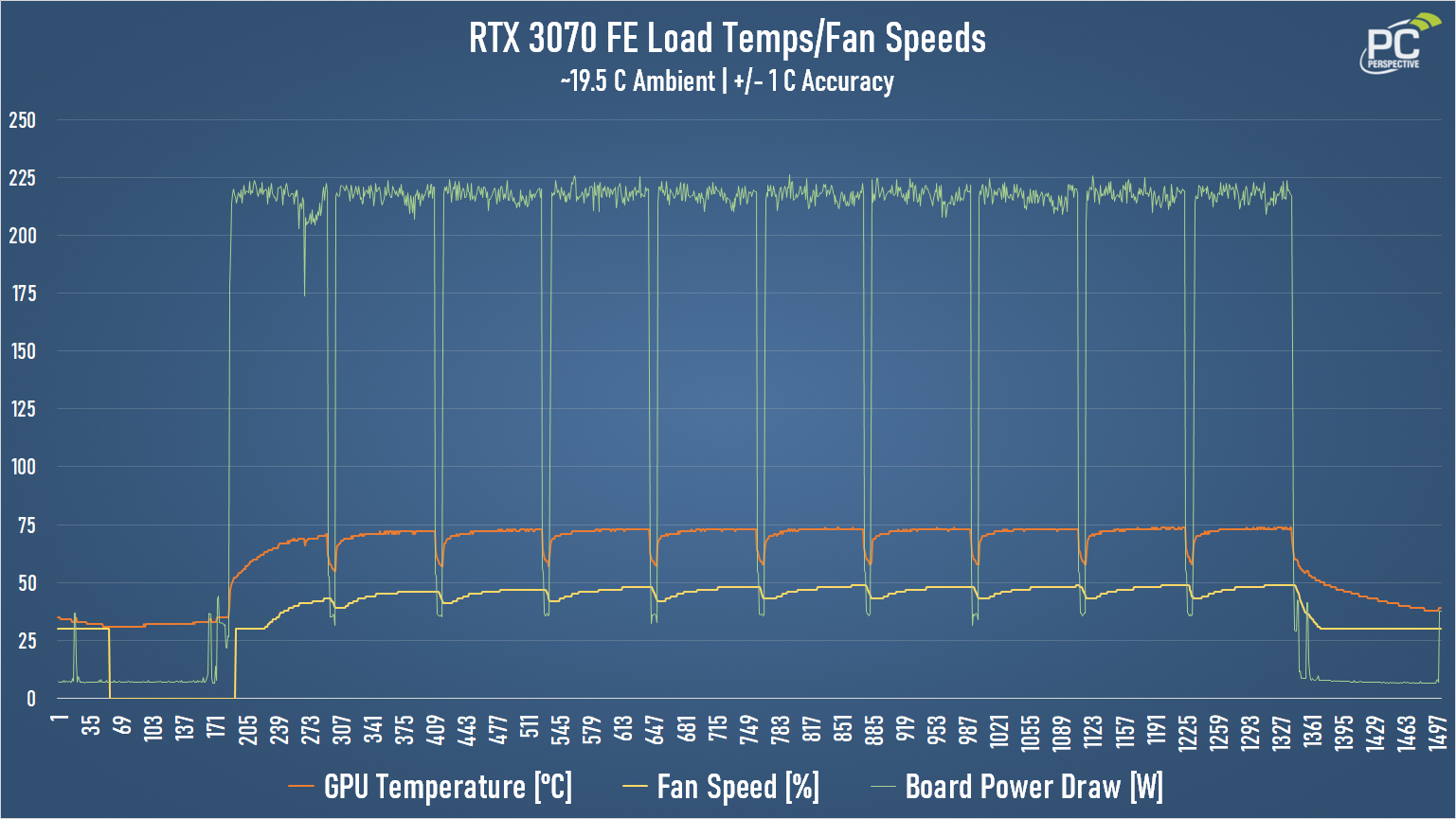 At idle the fans do not spin, and under load the fans never exceeded 50%, with 49% max speed recorded on both fans (1760 RPM) during the thermal tests. Naturally the load temps could drop with higher fan speeds, but the default fan curve produces a nice mix of cooling and very low noise.

Doing some quick noise level testing using an SPL meter positioned just 12 inches from the leading edge of the GPU in an open case, the card was barely audible with a reading of only 31.4 dBA with the fans at 25%, moving up to 35.1 dBA with the fans at 50%. And while the fans did not exceed 50% by default, I did push them to 75% in my testing, which resulted in a reading of 46.7 dBA in this (unrealistic) test.

Both the thermals and (especially) the noise characteristics of the RTX 3070 Founders Edition card are impressive. It’s a solid cooler design.

The GeForce RTX 3070 Founders Edition is a fantastic performer for $499. In the conventional raster-based graphics benchmarks we ran the 3070 FE averaged an ~8% decrease compared to the performance level of the RTX 2080 Ti, moving to within 4% of the 2080 Ti when factoring in RTX benchmarks as well.

Performance will naturally vary depending on the workload. When ray tracing was added to the mix the RTX 3070 FE can, in fact, top the RTX 2080 Ti, with the Bright Memory Infinite Benchmark showcasing a ~10% advantage with or without DLSS. 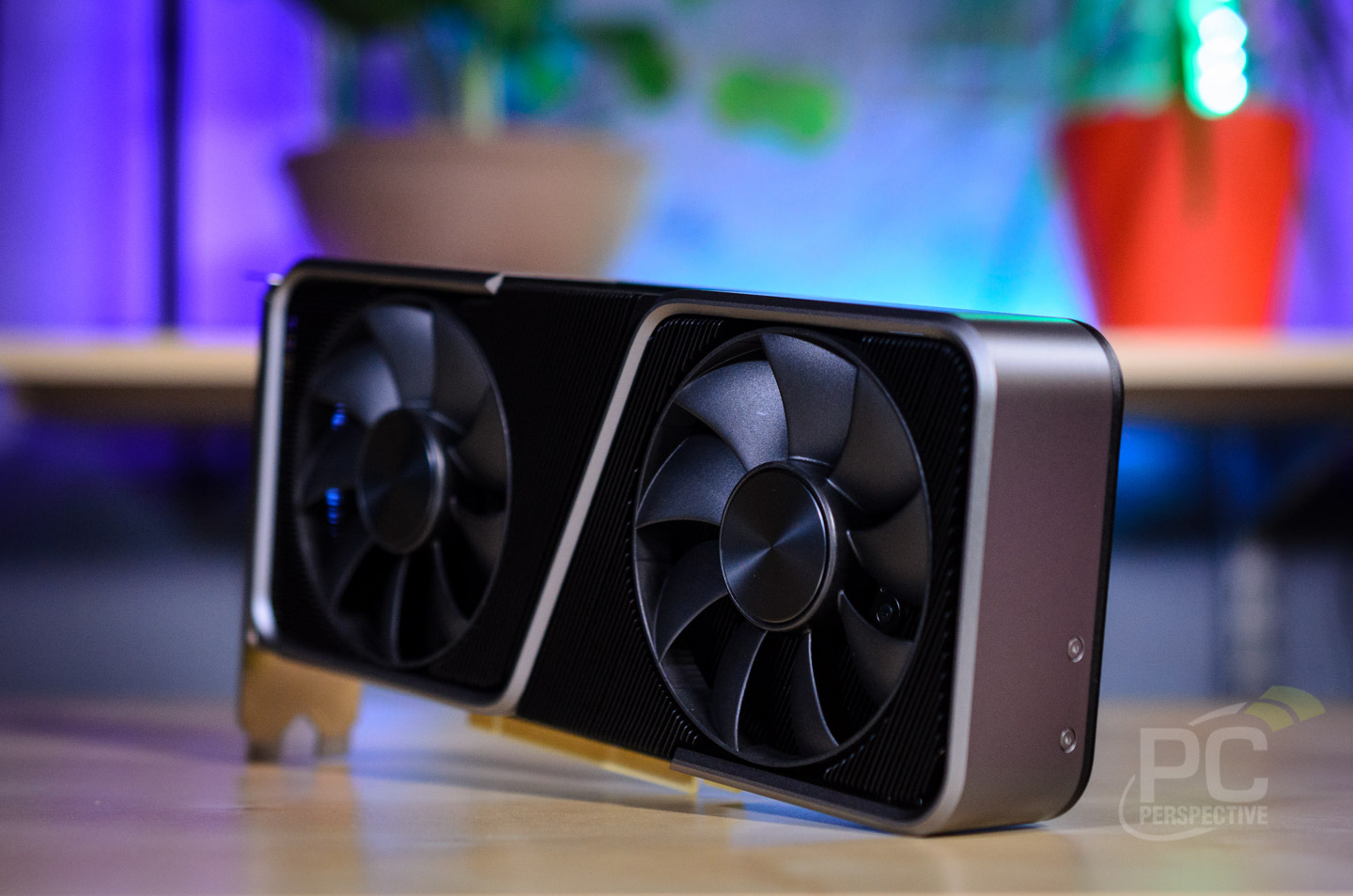 I can’t help but wonder how much faster this GA104 GPU might be if given more memory bandwidth, and NVIDIA has given themselves some room for a Ti/Super level GPU between the RTX 3070 and 3080 down the road. Certainly there will be something made of the 8GB framebuffer, particularly if AMD offers more VRAM at/near the same cost.

What we know right now, and by right now I mean October 27, 2020, is that NVIDIA has the GPU to buy at $499 with the RTX 3070 Founders Edition – if you can buy one. Availability – of course – will be a big part of this launch. But what AMD announces on October 28 will be another part of the story, and we only have leaks and rumors on the AMD front at this point.

No matter what AMD announces, the RTX 3070 Founders Edition we reviewed today is a fantastic product. Beautifully designed, quiet under load, reasonable power draw, and nearly as powerful as the RTX 2080 Ti at less than half the cost. If only every GPU launch was like this.

The GPU is on loan from NVIDIA for the purpose of this review.

The GPU remains the property of NVIDIA but will be on extended loan to PC Perspective for the purpose of future testing and product comparisons.

NVIDIA provided the product sample and technical brief to PC Perspective but had no control over the content of the review and was not consulted prior to publication.

Neither PC Perspective nor any of its staff were paid or compensated in any way by NVIDIA for this review.

NVIDIA has not purchased advertising at PC Perspective during the past twelve months. 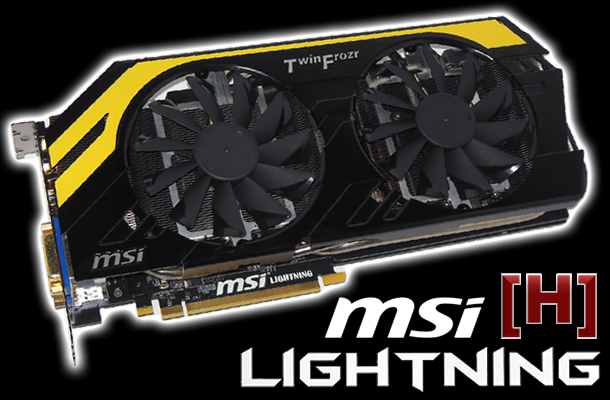 How fast can Lightning go? Testing out the LN2 BIOS on the MSI GTX680