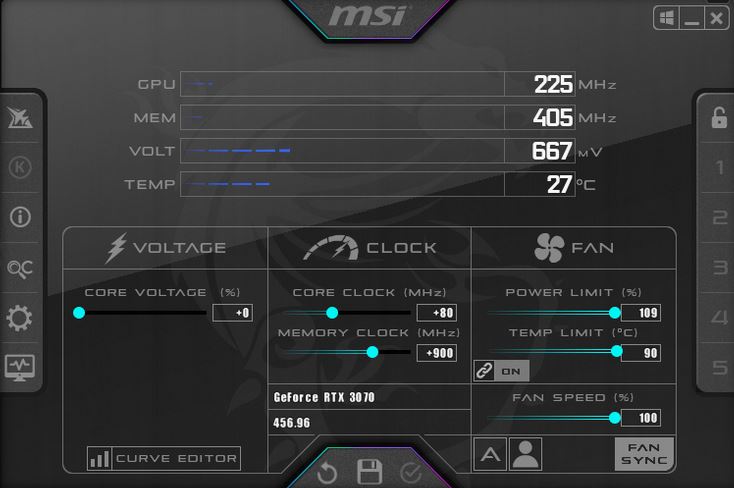 Can You Get More Out Of An RTX 3070 Founders Edition?

Looking at AIB partners RTX 3070’s we see that there is at least a bit of headroom left to push an RTX 3070 to higher frequencies, but in many cases this drives the cost so close to an RTX 3080 that it makes more sense to spend that bit extra for the better card.  The Founders Editions on the other hand are theoretically selling for $500, though actually unavailable at any reasonable price, so getting a bit more out of one of those would be a good investment of your time.

The FPS Review took a look at this topic recently, putting effort into finding out just how many more cycles can be squeezed out of this card.  As one might suspect, they used MSI’s Afterburner software to overlcock the card and increase the voltages.  They found that you could only push the power limit to 109% and while you could set the clock offset to 100, you would no longer be stable or worse, to downclock, which is why they went with a value of 80.

This allowed them to hit a Boost clock value of 2025MHz, with the average actual frequency being 2048MHz in game.  Memory offered a bit more leeway, allowing a 900MHz overclock for a stable frequency of 15.8GHz.  In the end, these boosts offered an 8% increase in performance, though without requiring much extra power, which does make trying your own overclock worth it if you are interested.

The PCB design, the chosen hardware components, the incredibly unique and proprietary heatsink, and fan design is unique to NVIDIA. Therefore, the overclocking ability of this Founders Edition video card may be different when we overclock add-in-board partner custom video cards.