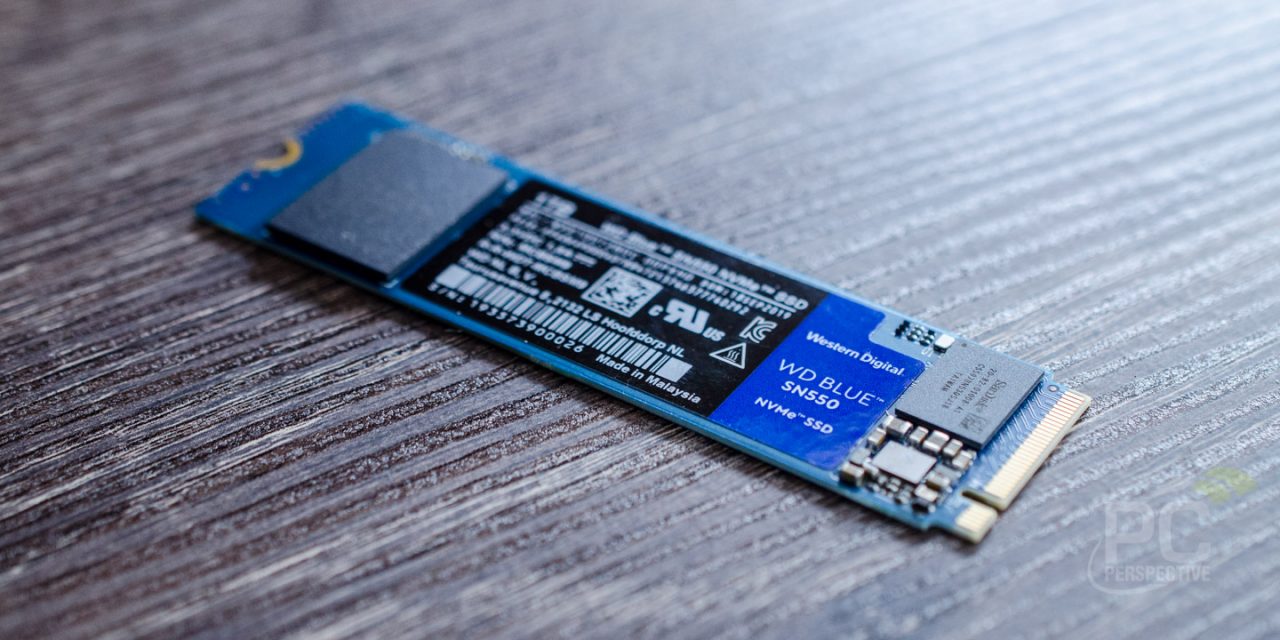 Western Digital’s WD Blue SSDs are mainstream drives in the middle of the company’s consumer product stack, offered at lower price points than the company’s high-performance WD_BLACK products, and positioned above the the WD Green lineup.

What we are looking at today is from the latest generation of WD Blue drives, with the SN550 (announced back in December 2019) replacing the previous SN500 as the PCI Express option in the lineup. (Some WD Blue M.2 SSDs use the SATA standard, rather than NVMe.) This is a DRAM-less drive, and while that typically means value rather than performance, the results might surprise you.

Pricing looks good for this advertised performance level, with a current retail of $109.99 (Newegg, WD Store) for the 1TB version reviewed today. This is just above the magical 10 cents/GB mark, and currently only $14 more than the SATA M.2 WD Blue 1TB drive (WDS100T2B0B). 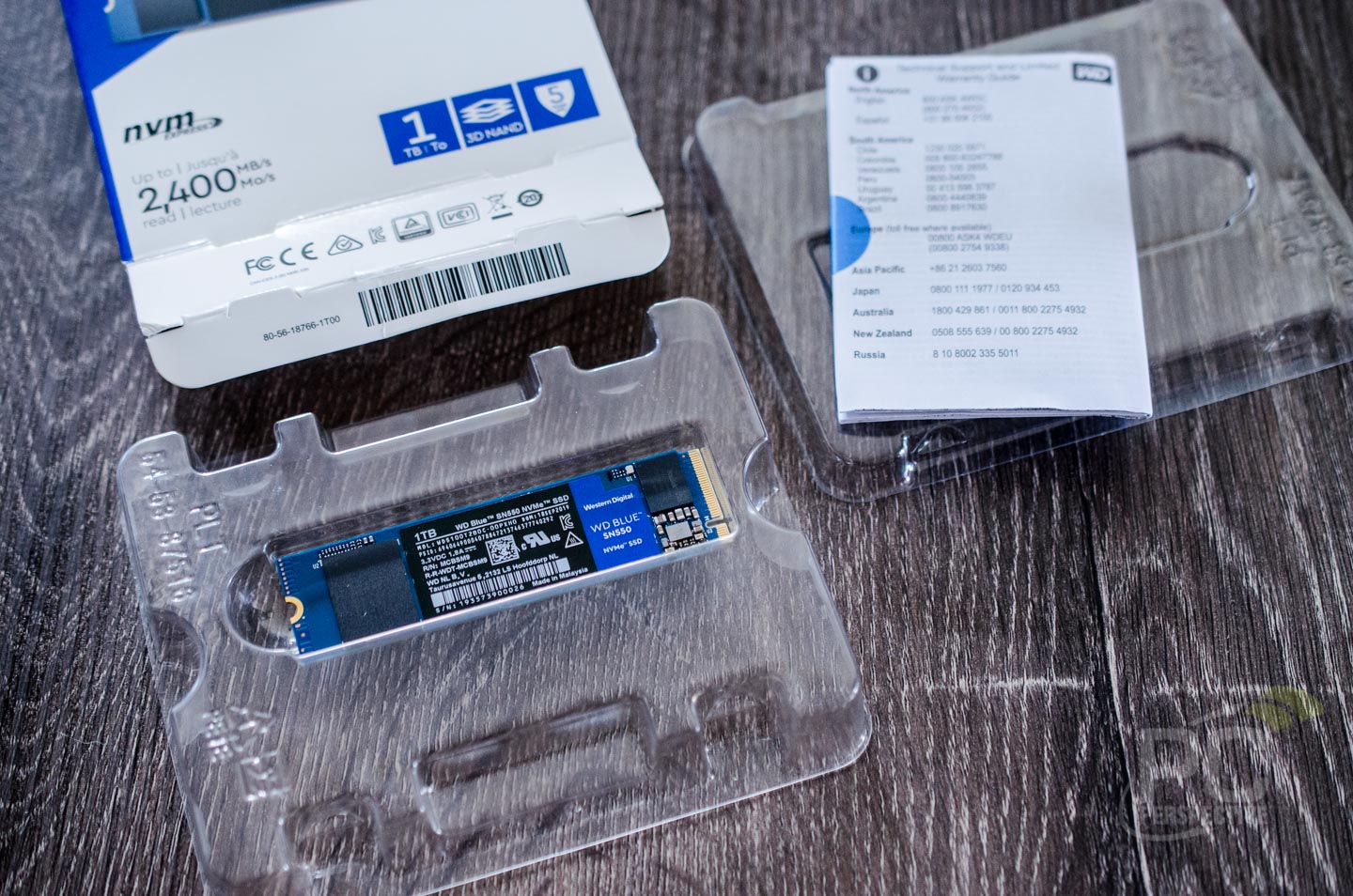 “Put NVMe power at the heart of your PC for lightning-fast, ultra-responsive performance. The WD Blue SN550 NVMe SSD can deliver over 4 times the speed of our best SATA SSDs. Whether you’re working, creating, casual gaming or processing large amounts of data, take advantage of this powerful internal drive’s high speeds to do more, faster. Available in capacities up to 1TB in an affordable M.2 2280 form factor, there’s no time like now to make the change to NVMe.” 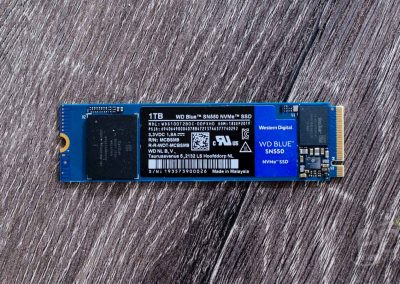 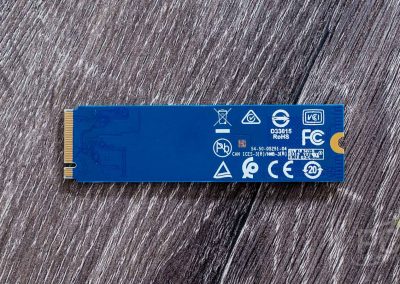 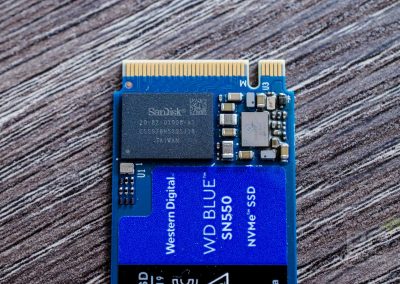 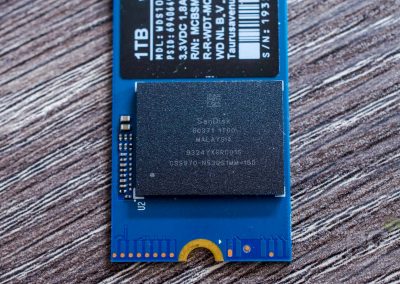 We can’t expect miracles given the DRAM-less design of the SN550, which features a PCIe Gen3 x4 SanDisk controller and single package of 96L BiCS4 NAND. The controller does have some internal SRAM as mentioned in this summer’s STH review, so performance should be higher than typical DRAM-less designs.

I don’t have one of the previous WD Blue SSDs on hand to compare the SN550 against, but I put together a few tests that pit it against the Kingston KC2000 as well as a couple of lower-cost mainstream options from Intel and Lexar.

First a quick look at the result with just the WD Blue SN550 using CrystalDiskMark at default settings: 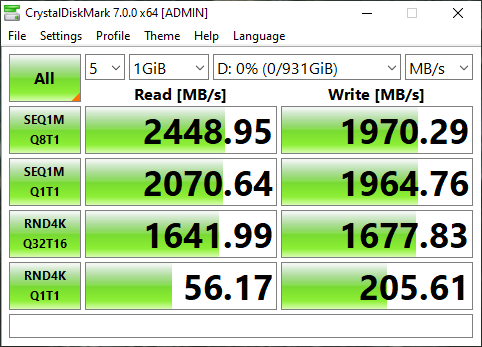 The WD Blue SN550 finishes above the theoretical 2400 MB/s max for reads, with a ~2450 MB/s sequential result using CrystalDiskMark 7. Sequential writes came in a high of 1970 MB/s using the benchmark’s default settings (queue depth 8, single thread), which is also just above the rated spec (1950 MB/s).

Moving on to results at different queue depths, here we see the breakdown at QD1, QD2, QD4, and QD8 with each of the tested drives: 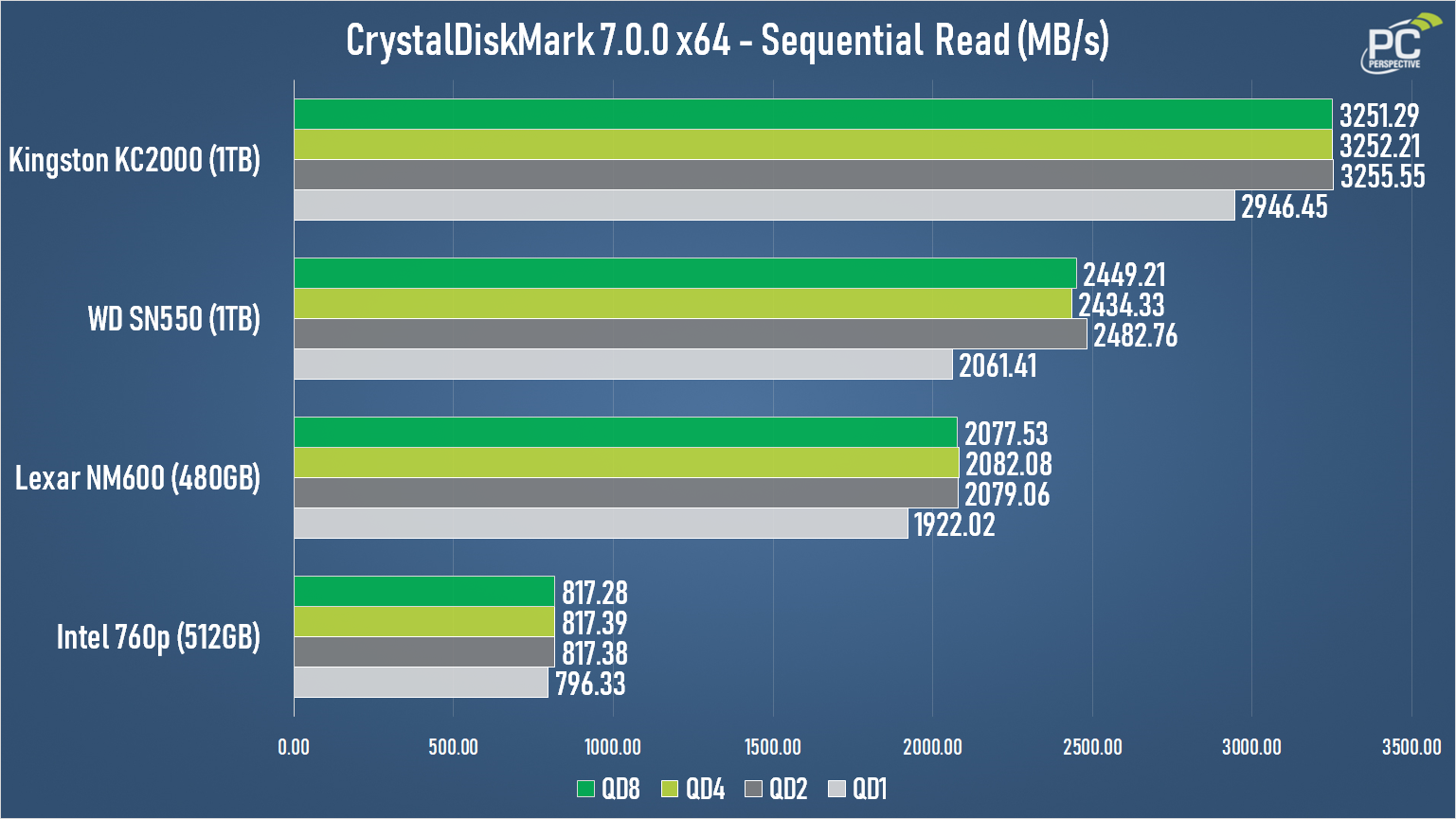 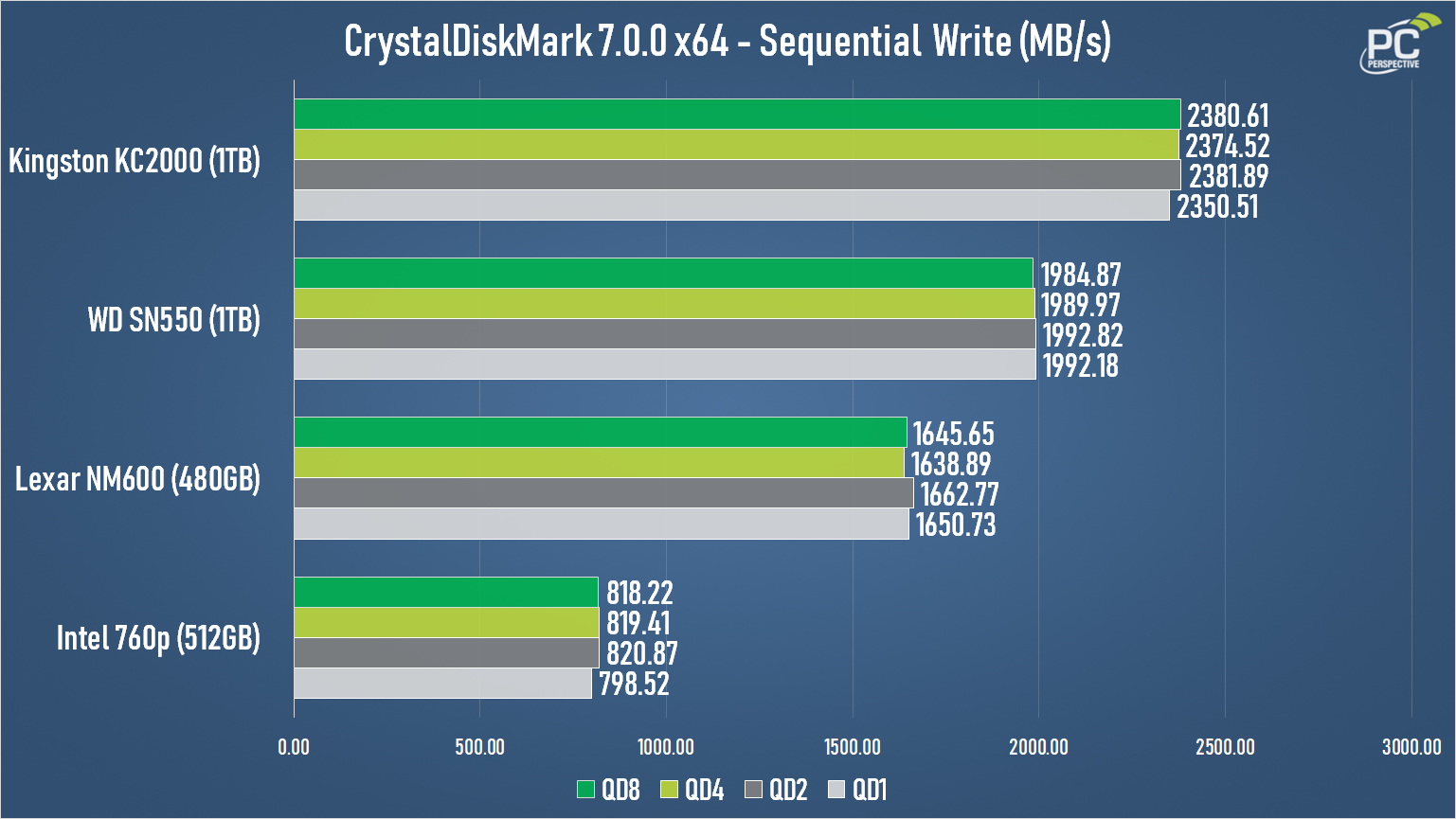 The sequential read/write results (all single thread) are quite good considering the $109.99 price of the SN550, with the KC2000 drive from Kingston a faster, and more expensive (currently ~$174), option at the top of the chart. It’s worth noting that the KC2000 has been replaced by the KC2500, which has a similar price point.

WD Blue SN550 looks very good so far, but we’ve only looked at sequential numbers. Next we’ll have a look at 4K random reads and writes, again broken down by QD1, QD2, QD4, and QD8: 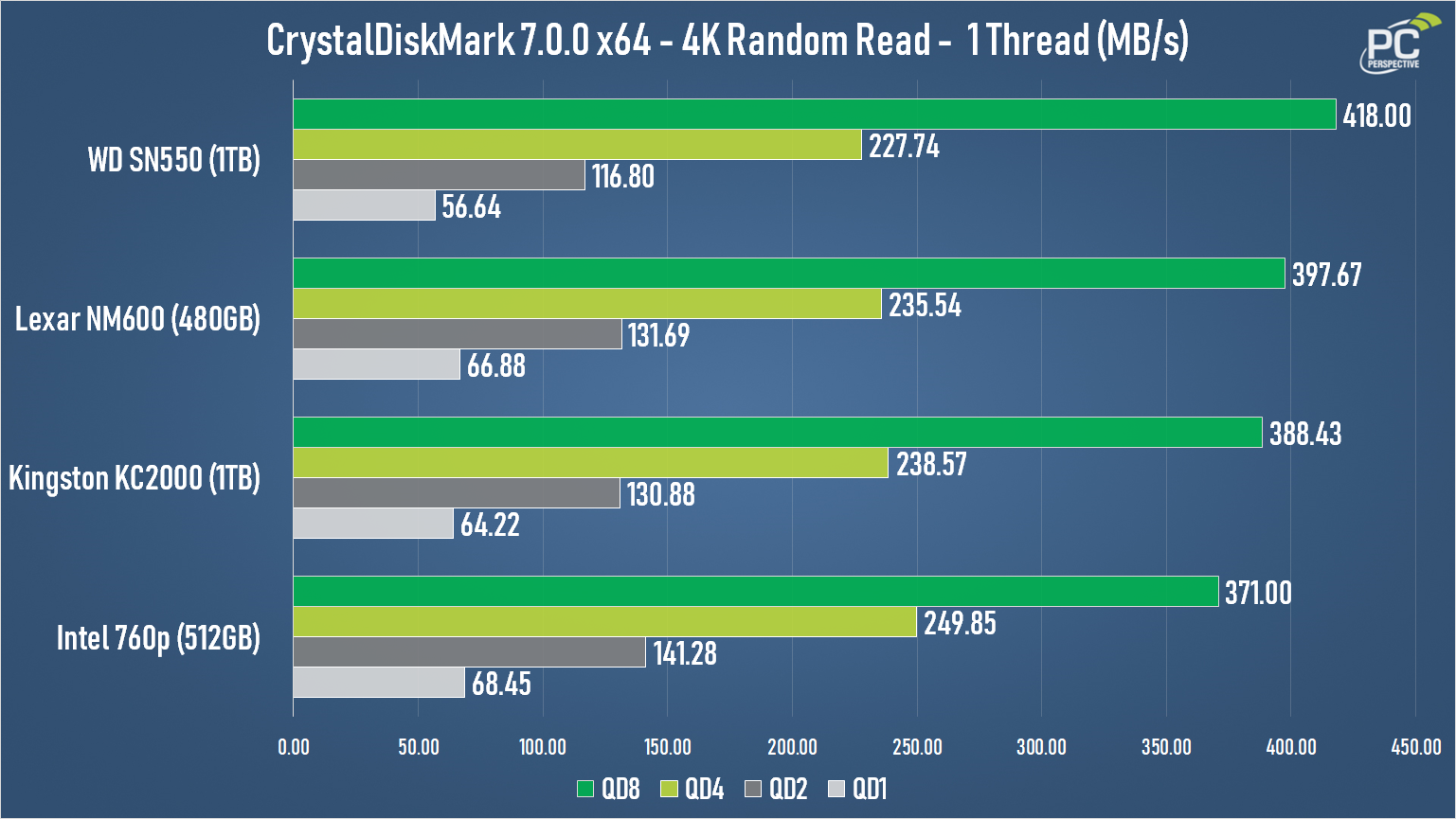 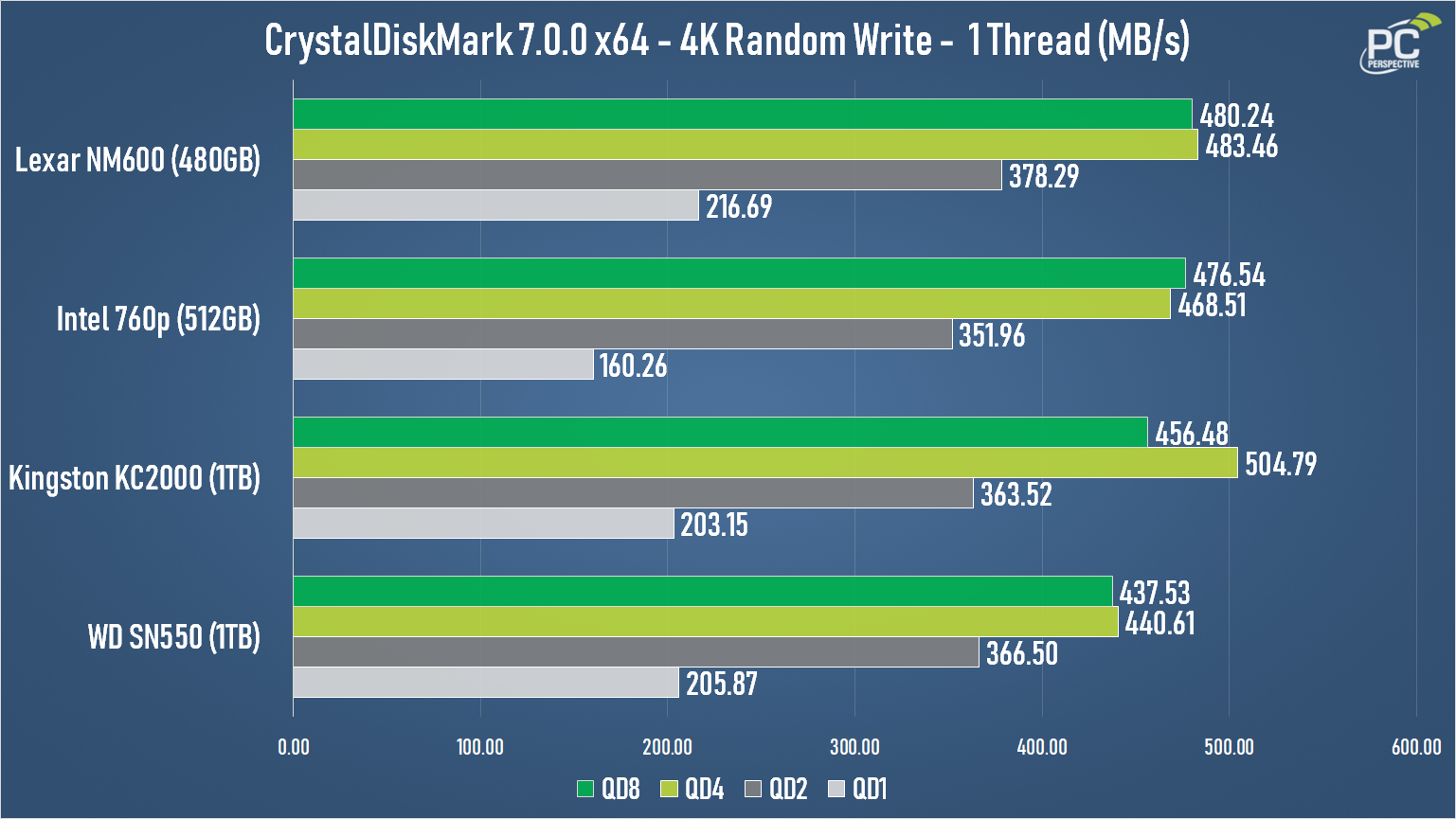 Just how fast the SN550 actually is will be depend on workload, as the charts show that it has both the highest QD8 results, and the lowest QD1 results in the read tests, but higher QD1/QD2 performance than the KC2000 in the 4K write tests.

As to the generally higher QD8+ performance, when the workload is able to use more of the SSD controller’s available channels, performance obviously improves – and significantly so in the case of the SN550. The lower performance of the SN550 at very low queue depths is easily demonstrated when we look at IOPS, where it has the lowest read numbers in the group at QD1 and QD4, but is far ahead at QD16: 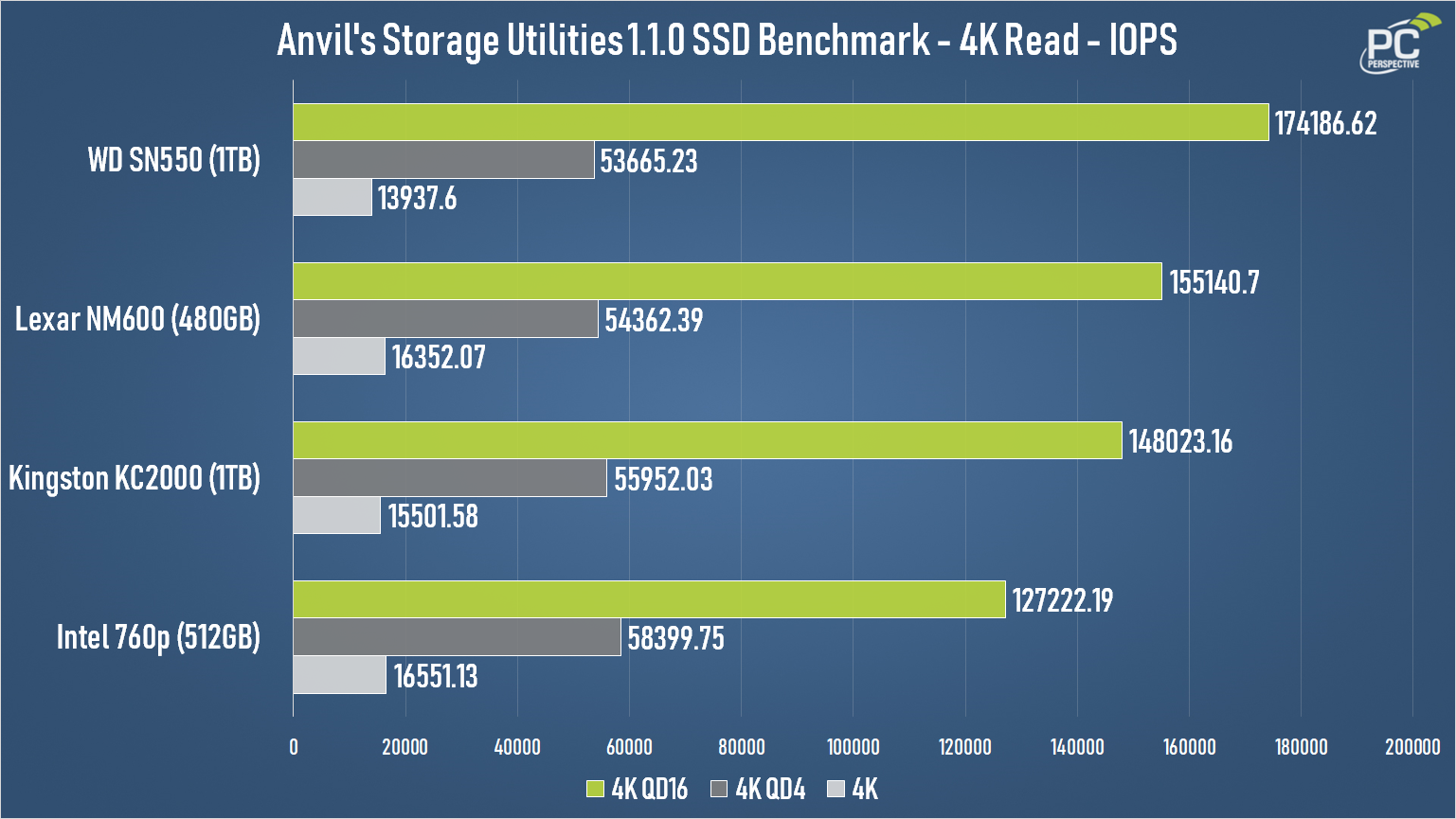 Write performance is better at low queue depths for our 1TB SN550, as it catches up to the KC2000 at QD4 and retains a large lead at QD16: 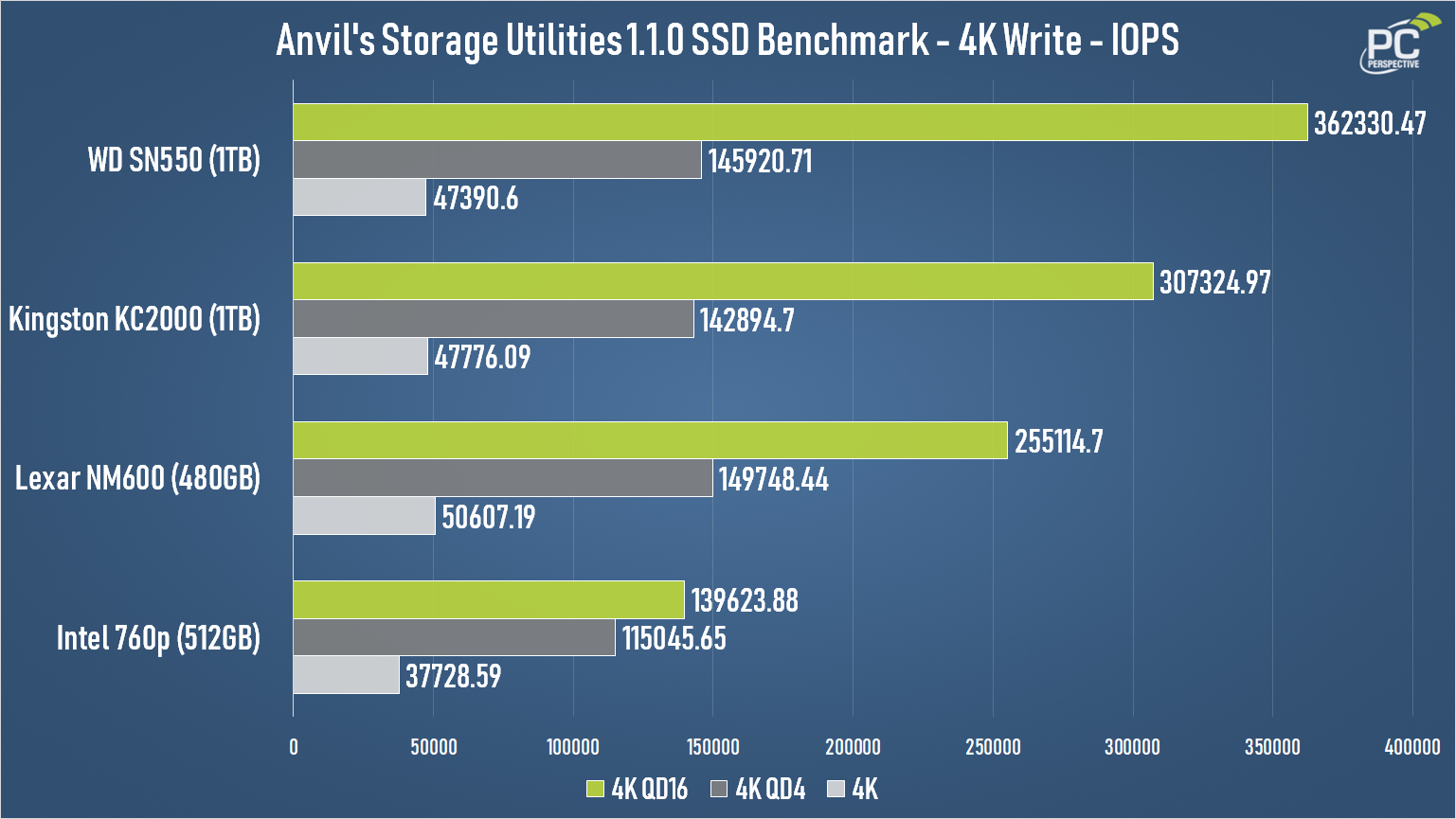 For those curious, here is a look at the response time recorded by the Anvil SSD Benchmark during these tests: 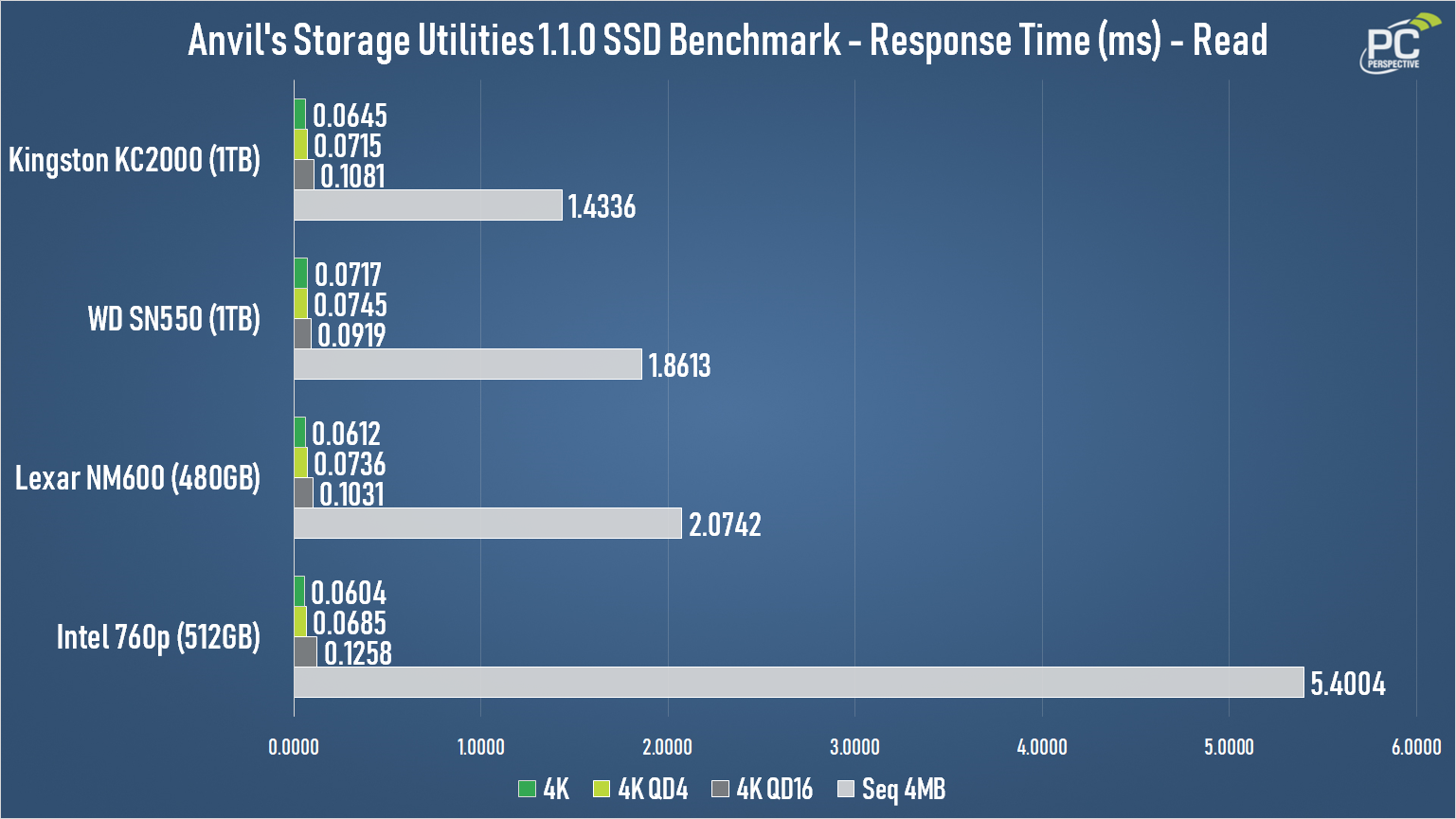 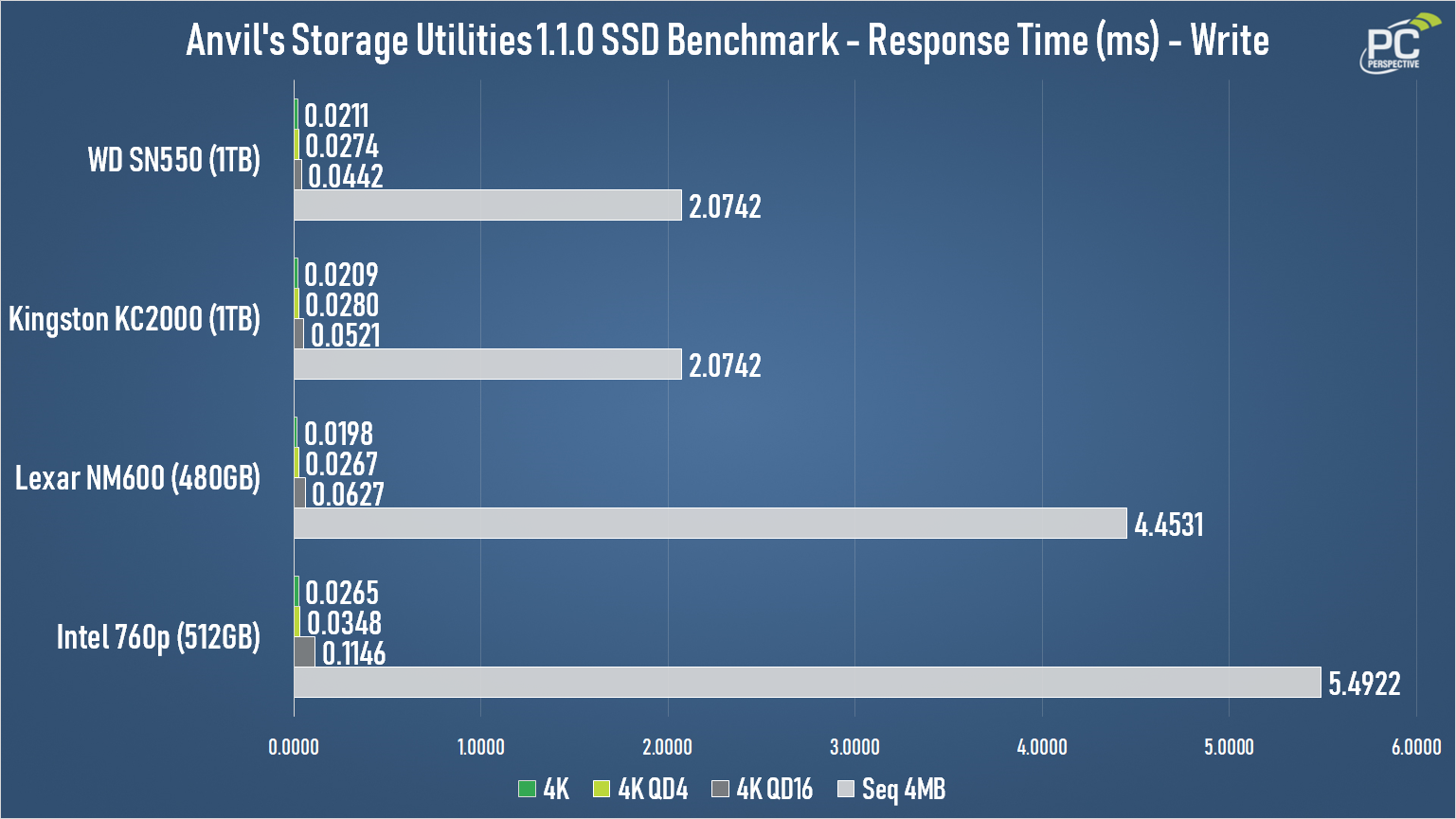 For a DRAM-less design the WD Blue SN550 puts up some impressive performance numbers, and even though it will fall short of higher-performance Gen3 NVMe options this will ultimately come down to price/performance.

The WD Blue SN550 is a solid option if you don’t need the fastest performance that Gen3 NVMe can provide. The price is appealing at $109.99, though I would personally opt (right now, anyway) for Western Digital’s significantly higher-performance WD_BLACK SN750, which is only $135 on Amazon for a 1TB drive – though that deal won’t last. 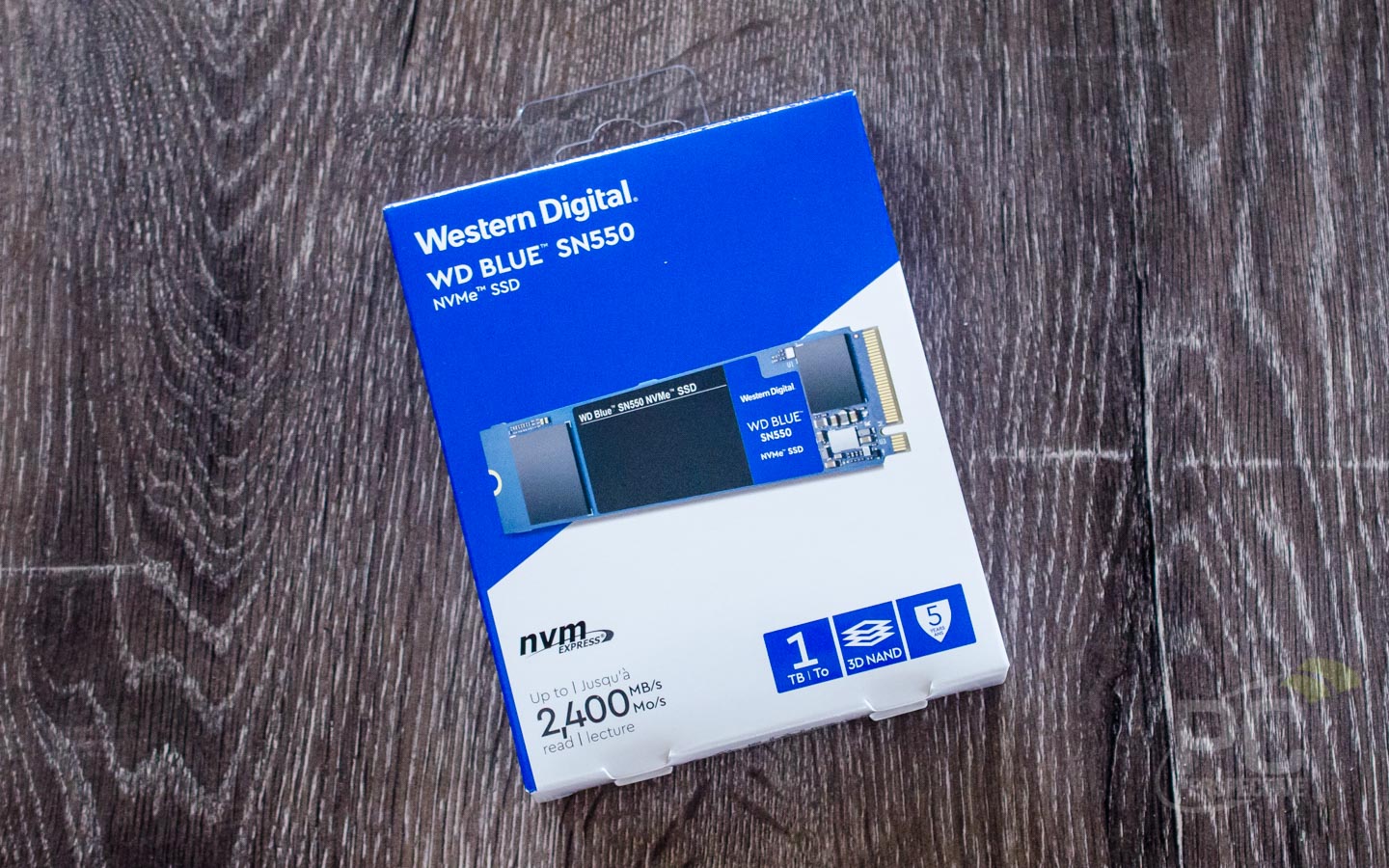 The WD Blue SN550 is positioned as a significant upgrade over their previous SN500 SSD, and the performance is impressive for a DRAM-less drive. It would make an excellent upgrade over a SATA SSD, and the competitive pricing helps it stack up favorably against other low-cost NVMe options as well.

The SSD is on loan from Western Digital for the purpose of this review.

The SSD remains the property of Western Digital but will be on extended loan to PC Perspective for the purpose of future testing and product comparisons.

Western Digital provided the product sample and technical brief to PC Perspective but had no control over the content of the review and was not consulted prior to publication.

Neither PC Perspective nor any of its staff were paid or compensated in any way by Western Digital for this review.

Western Digital has not purchased advertising at PC Perspective during the past twelve months. 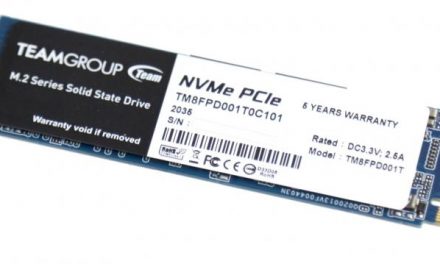 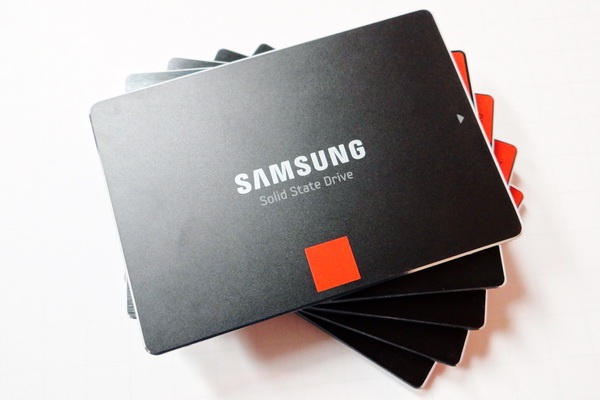 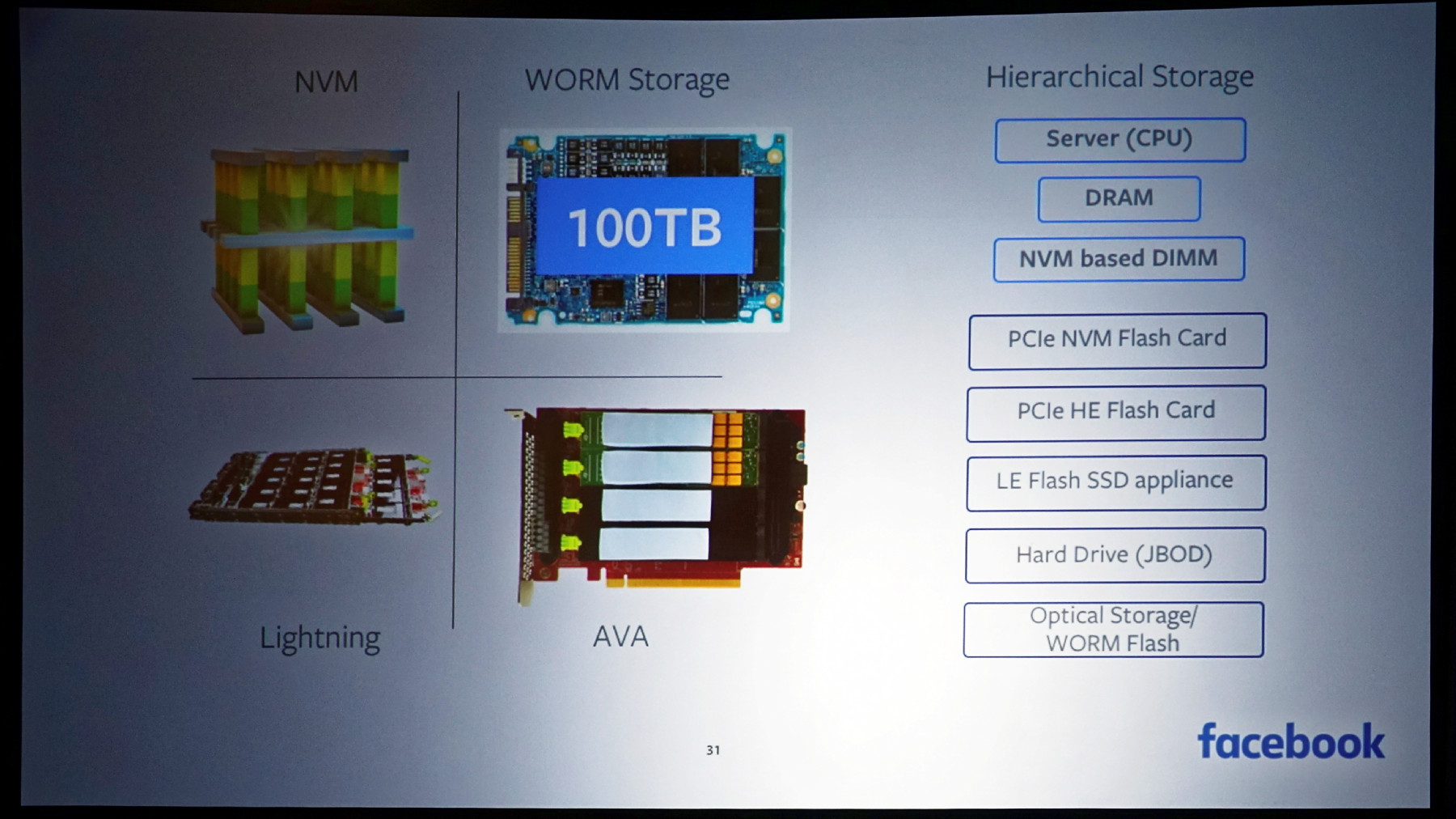