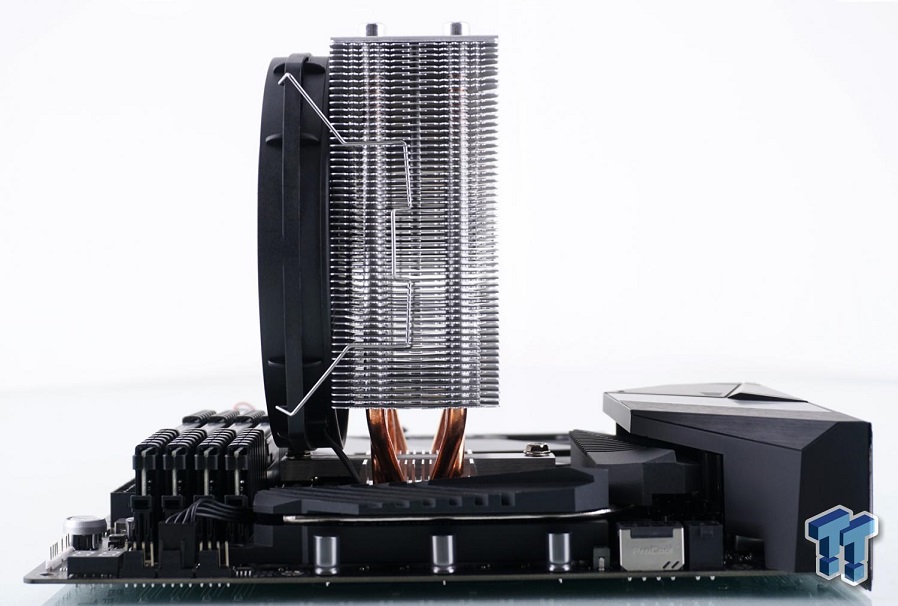 There are two main differences between the original be quiet! Shadow Rock Slim and the Slim 2; the first is an aesthetic change to the top plate to a nice looking brushed aluminium while the second is an update to the mounting hardware.   The hardware now includes a back plate for Intel systems in addition to updated brackets and standoffs, the AMD kit also gets updated hardware but will use the back plate which comes with the motherboard.

It measures 52mm thick, 130mm width, and the 161mm height without the 135mm SilentWings 3 fan attached, weighing in at 690g (1.5lbs).   As with the original Shadow Rock Slim, the focus is on quiet operation and enhanced compatibility with tightly spaced systems.   The Shadow Rock Slim 2 produces a mere 22dB when cooling a Ryzen 5 3600X at stock speeds and 25dB if the processor is overclocked.  When Tweaktown pushed the fan to 100%, it was still a mere 33dB which will barely be audible in most cases.

If you need a slim and quiet cooler, capable of keeping high end processors at a decent temperature under load and don’t want to spend more than $50 then this review will be pretty cool for you to check out.

be quiet!'s Shadow Rock Slim 2 CPU cooler launches today and here's our full review of this cooler that managed to impress.

Temps are risin! Break out the Watercooling & More

You have got to be kidding!