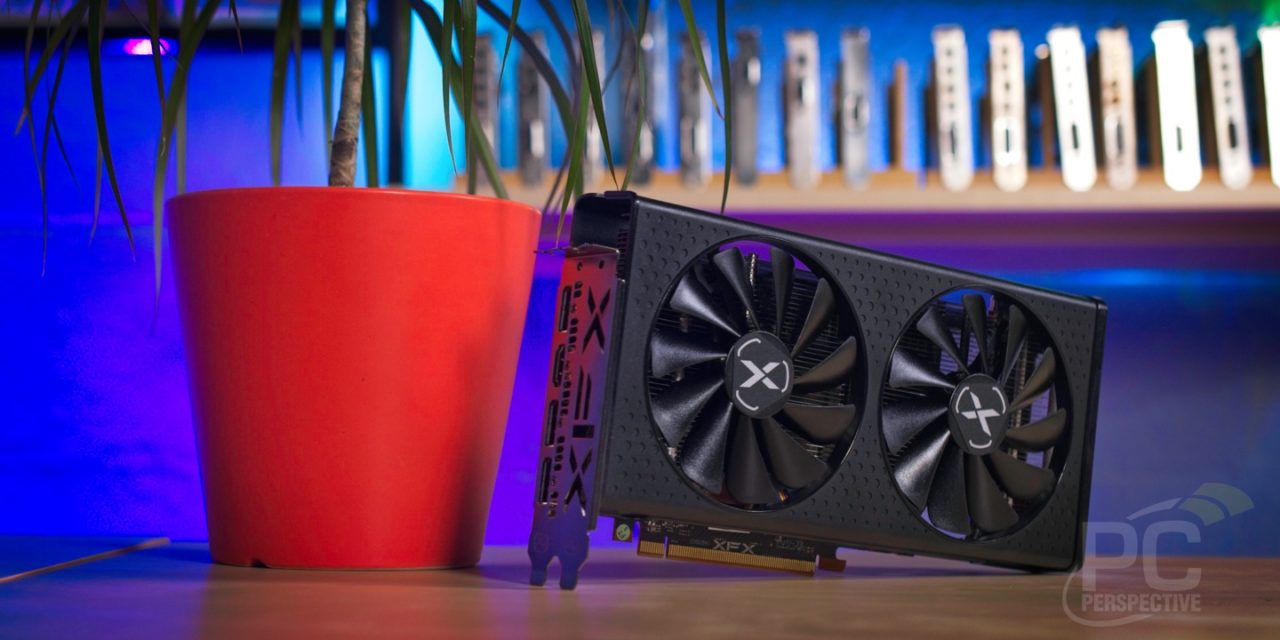 AMD’s latest graphics card is here, with the Radeon RX 6600 (non-XT, if that helps) providing a theoretically lower-cost option for high-performance 1080p gaming. It isn’t new silicon, being another variant of the Navi 23 GPU found in the RX 6600 XT and Radeon RX 6600M, but it adds another option for prospective shoppers hoping for an RDNA2-powered desktop card.

Compared to the RX 6600 XT, we are looking at a GPU with four fewer Compute Units, which translates to 1792 shaders vs. the XT’s total of 2048. The effective memory speed is 14 Gbps, down from 16 Gbps with the XT. Infinity Cache remains 32 MB. 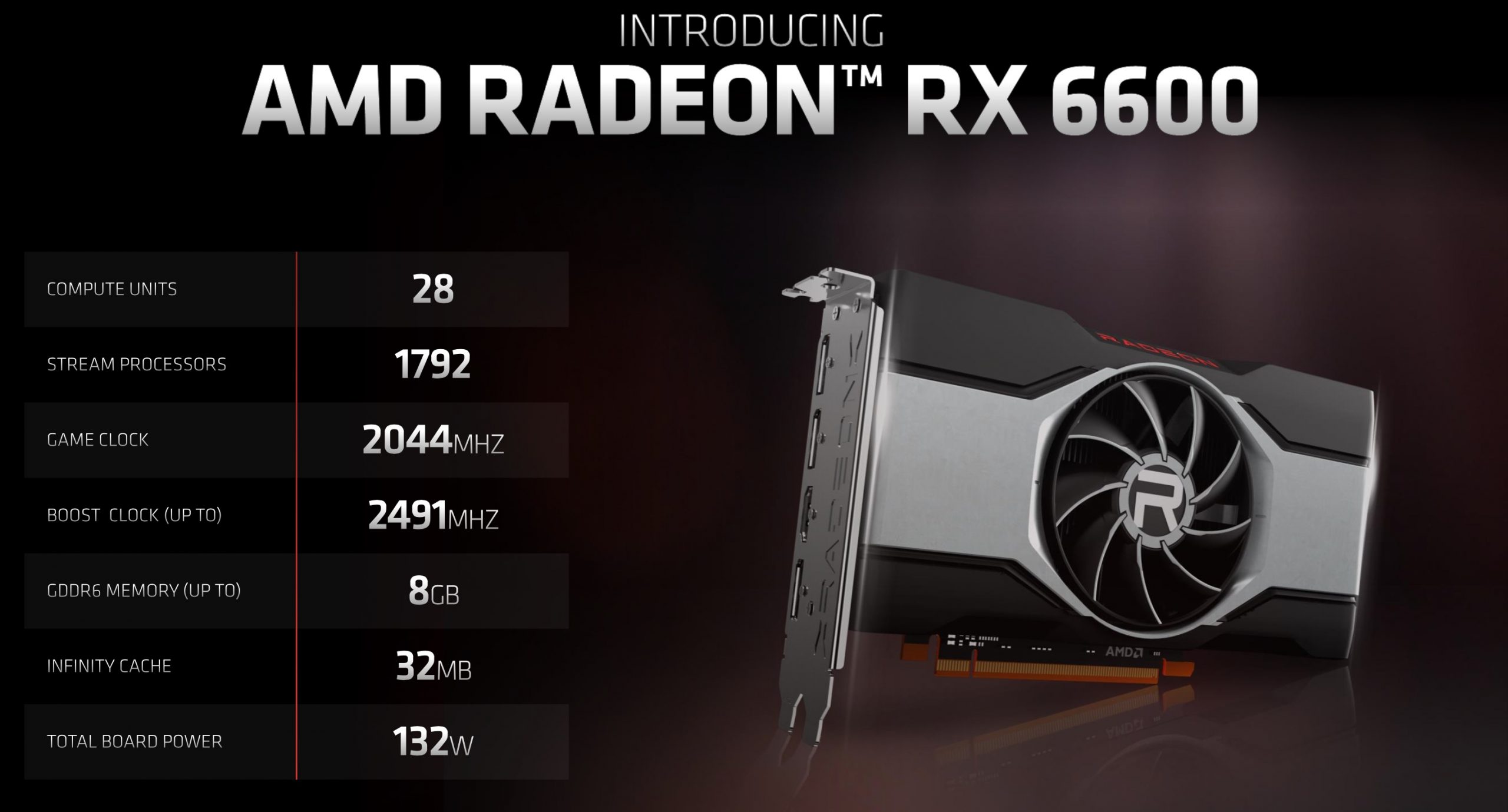 Here’s a look at the specs across most of the RDNA 2 lineup:

The reduction to 14 Gbps from the GDDR6 results in memory bandwidth of 224 GB/s, down from 256 GB/s with the XT. As one would expect, the TBP (Total Board Power) is down as well, and sits at just 132W for this new card.

AMD sent over an XFX SWFT 210 card for our review, and this design is identical to XFX’s RX 6600 XT version of the SWFT 210, a dual-slot card with a dual-fan cooler atop horizontal heatsink fins, with a metal backplate featuring a cutout for additional airflow. 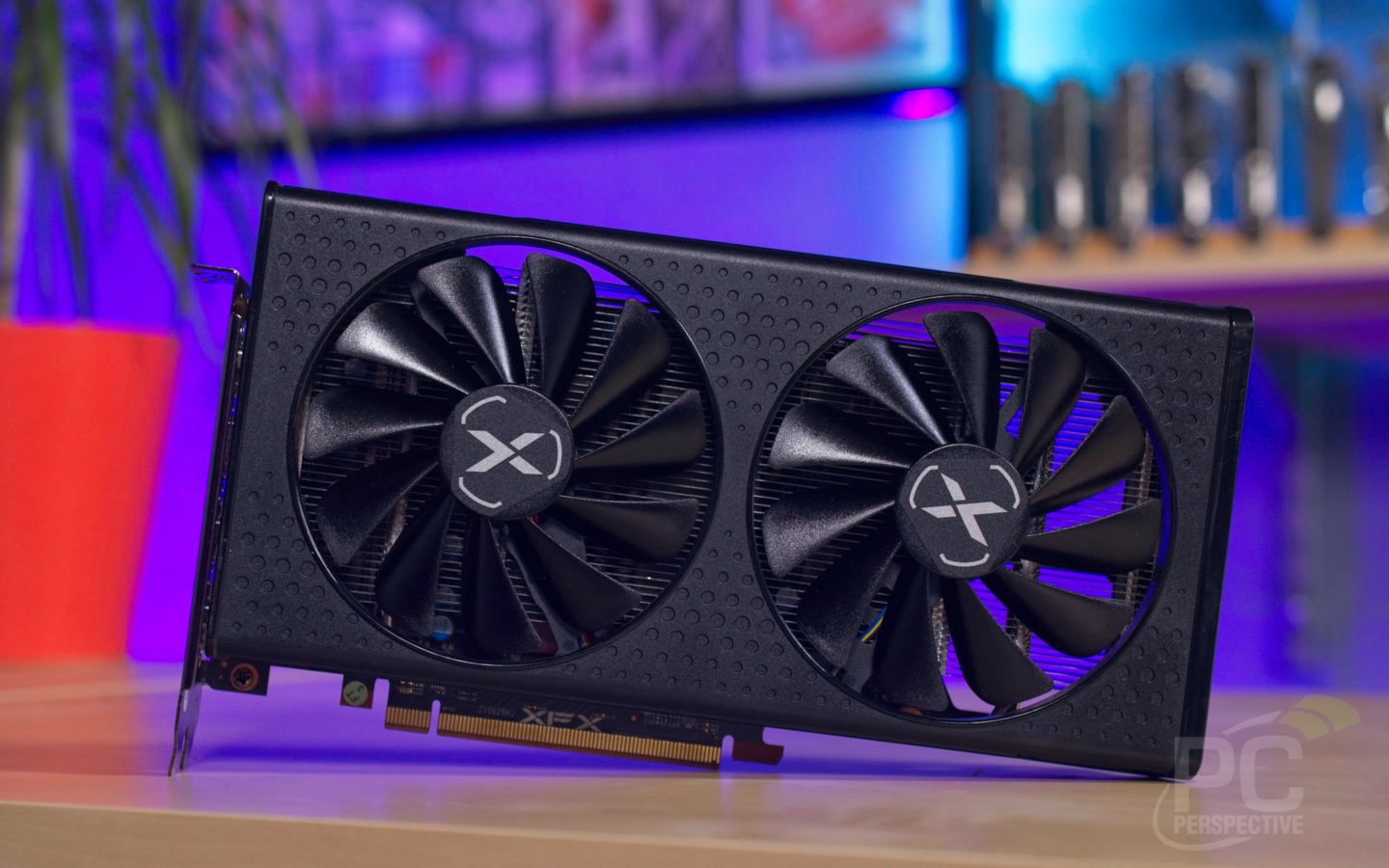 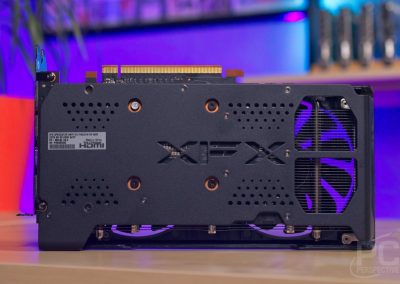 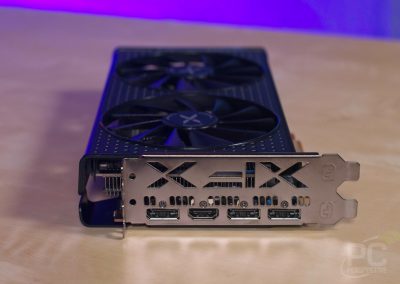 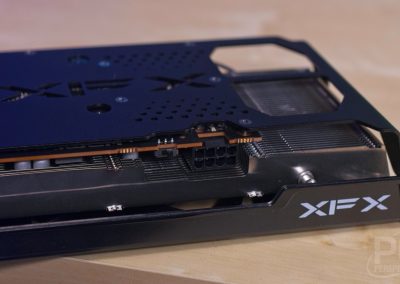 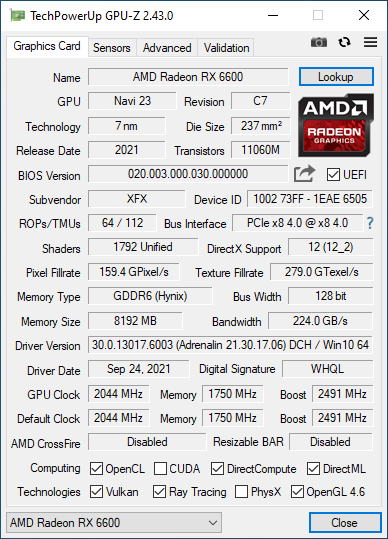 Power requirements are a single PCI-E 8-pin connector for this card, and with a board power rating of just 132W for the RX 6600 this provides quite a bit of headroom.

As to pricing, Newegg has a listing up this morning and it appears to be $329.99 – but you have to be a Shuffle winner to get it. How much it will end up selling for outside of the Newegg Shuffle is anyone’s guess.

As mentioned above, the Radeon RX 6600 is using the same Navi 23 GPU as the RX 6600 XT, but with four fewer Compute Units enabled, and with slower 14 Gbps memory on the same 128-bit bus. Performance will obviously be lower than the XT variant, but will it best an NVIDIA RTX 3060? Let’s find out.

Here are some results using the same tests as our Radeon RX 6600 XT review, so these will be 1080p benchmarks: 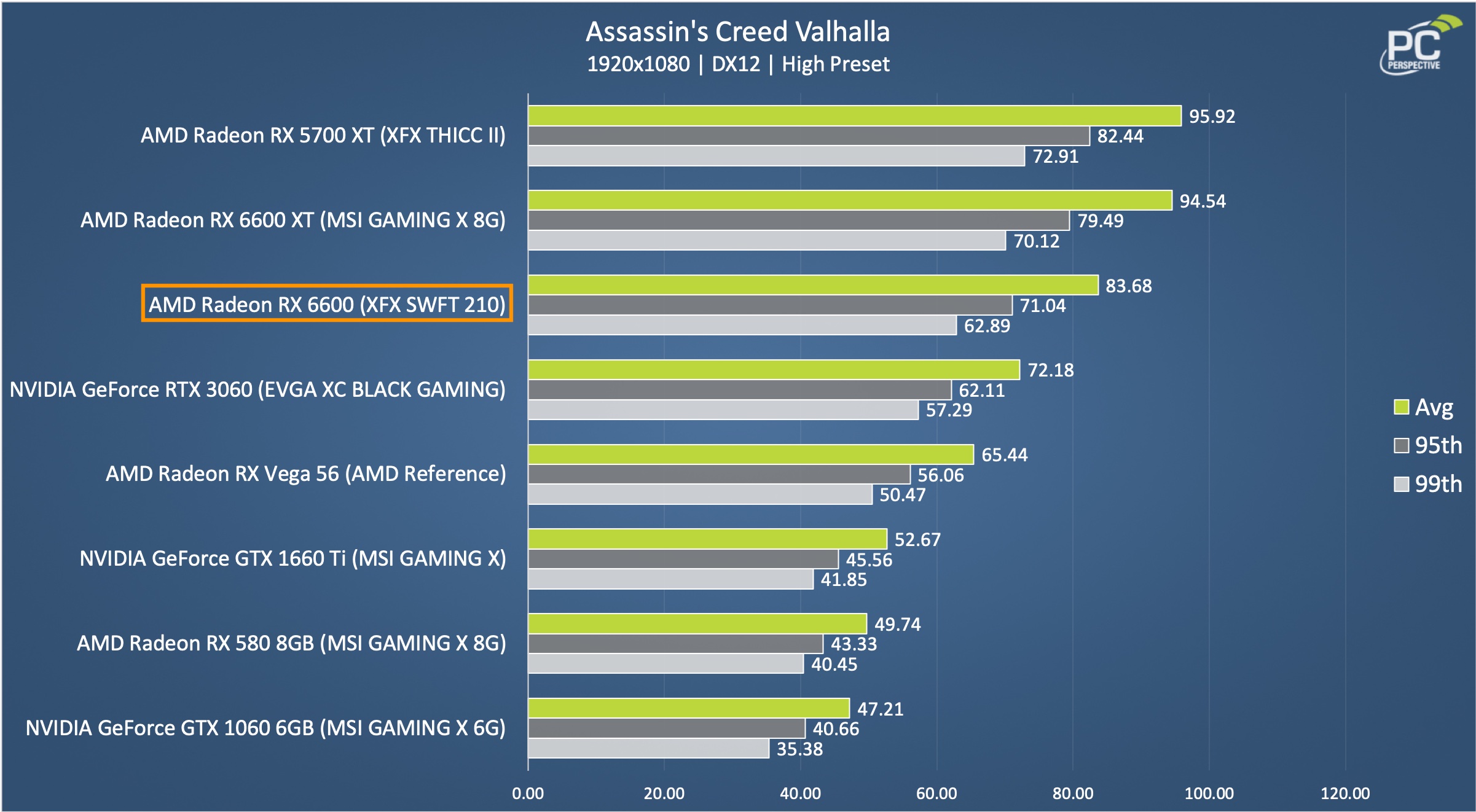 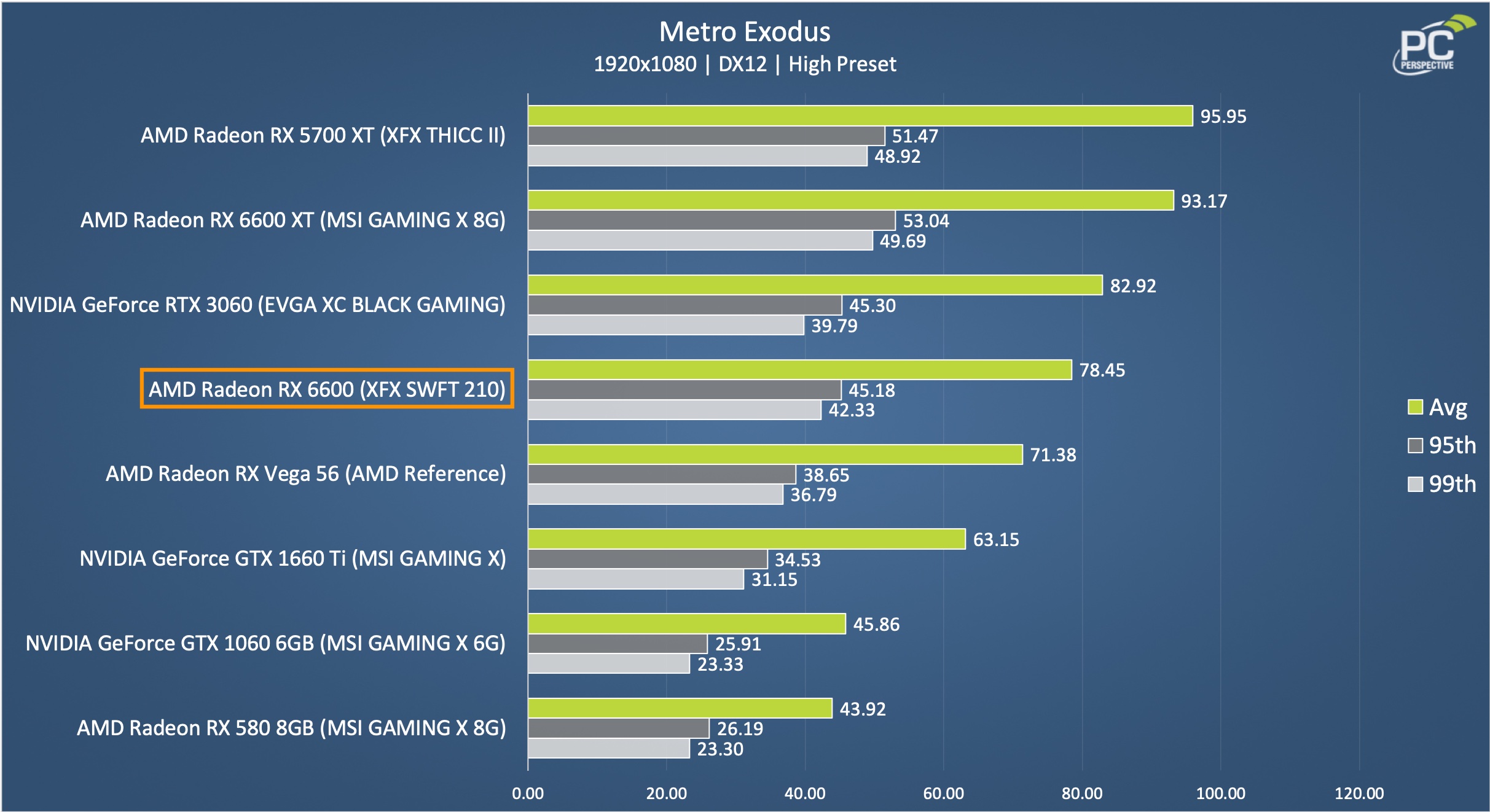 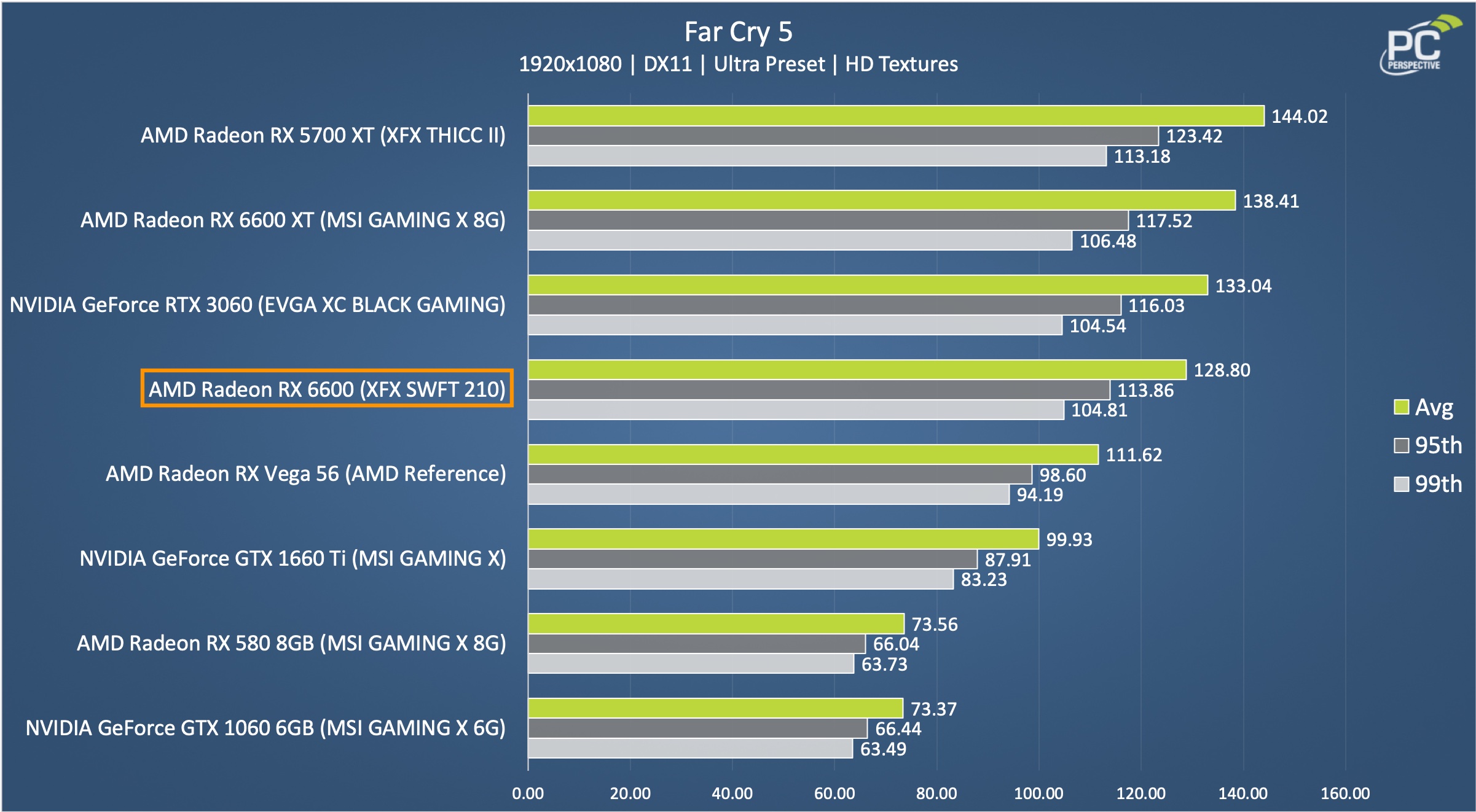 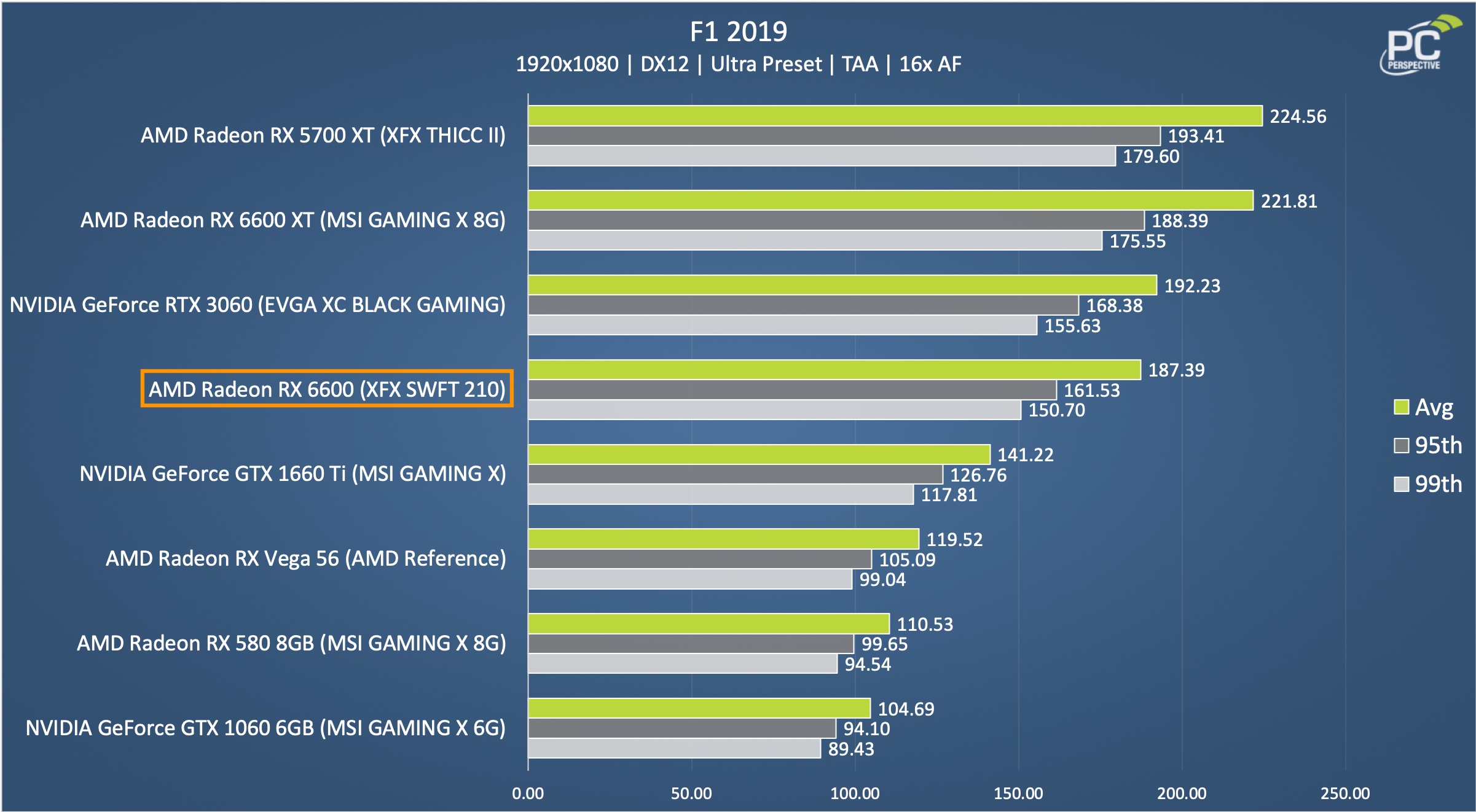 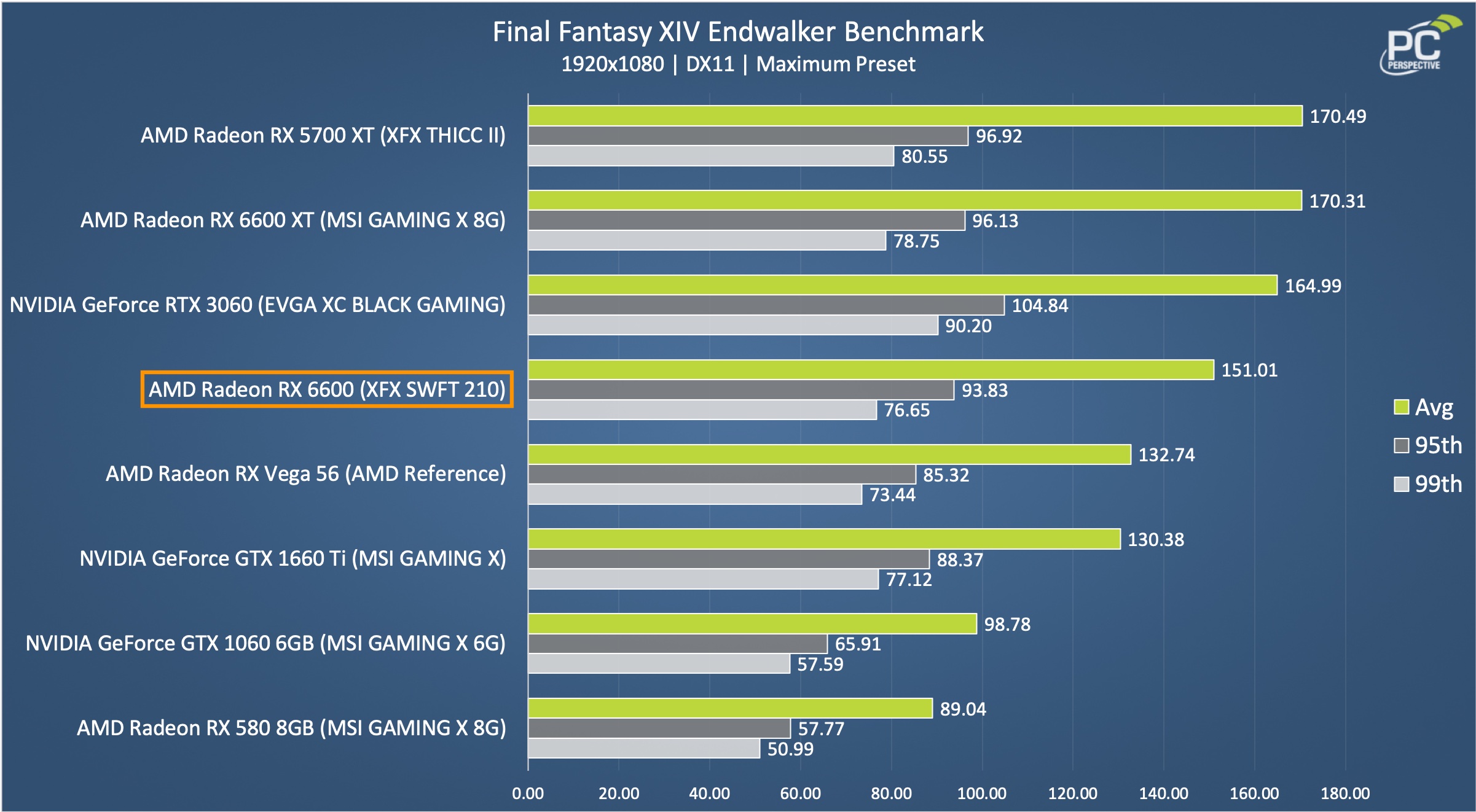 As you can see, our stock Radeon RX 6600 had an early victory over the GeForce RTX 3060 in Assassin’s Creed Valhalla, but ended up trailing in the rest of the games in this very small collection. A larger sample size is needed, but it seems safe to assume that the RX 6600 is capable of “trading blows” with the RTX 3060, depending on the title and how well optimized it is for Radeon graphics.

As to performance compared to the RX 6600 XT, our MSI GAMING X sample was just over 12% faster overall than the stock RX 6600 non-XT from XFX reviewed today. 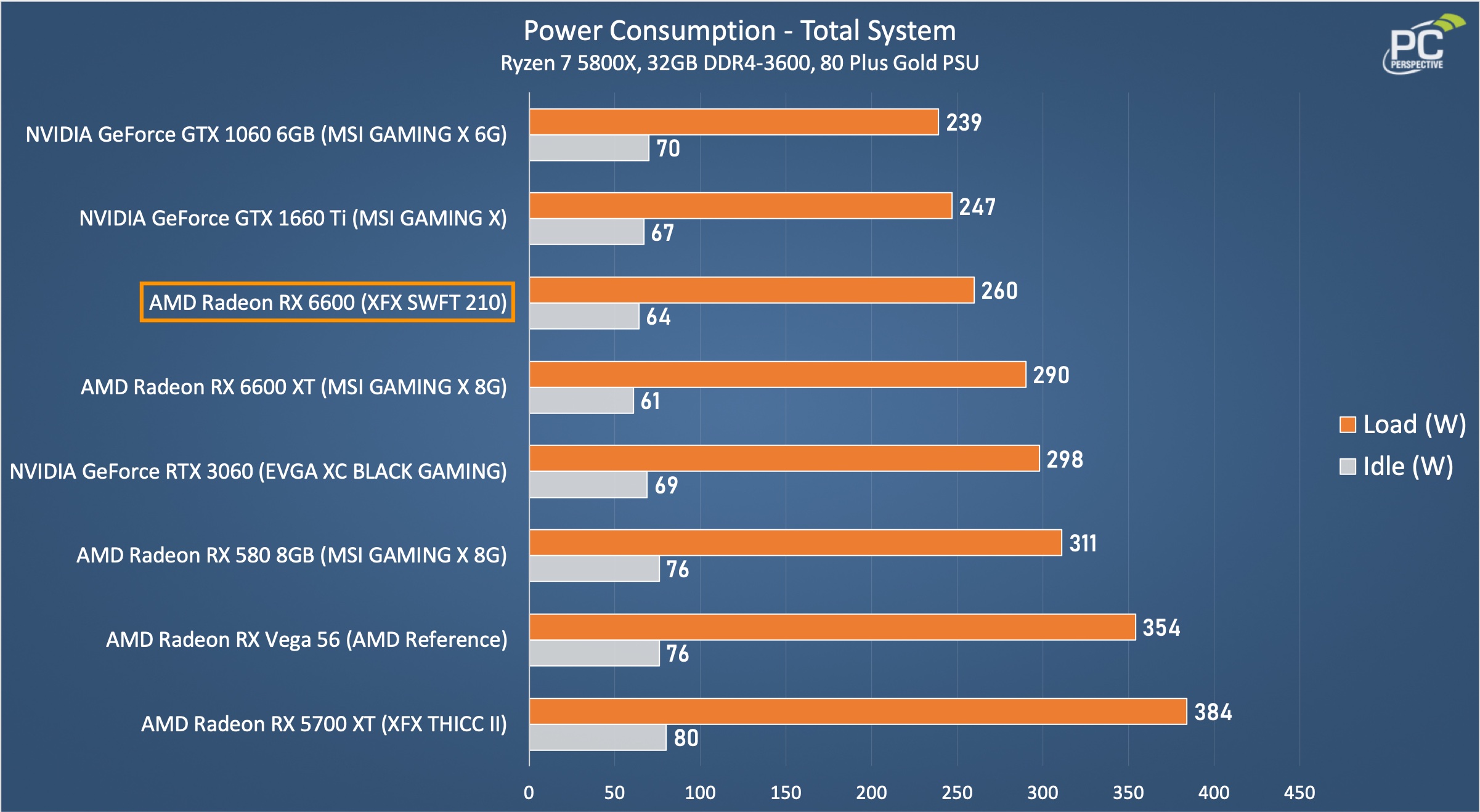 Power draw from our test system (measured at the wall) is impressive, as the Radeon RX 6600 XT comes in 38 watts under the RTX 3060. The performance scales with power when comparing the two RX 6600 versions, as we observed a 30 watt reduction from the RX 6600 XT with this system.

As with all graphics card launches in recent memory, the biggest story with the new Radeon RX 6600 will (unfortunately) be about availability, rather than performance. It just doesn’t matter how impressive – or underwhelming – any GPU launch is.

List pricing is another meaningless area in reviews these days, as this will be set by retailers and decided by the market. When we looked at the RX 6600 XT from MSI, the card (a GAMING X version) ended up being listed at $579.99 on Newegg – $200 above AMD’s MSRP for a stock version of the GPU.

Two years ago the idea that a card marketed as a 1080p gaming solution selling for over $300 would have been hilarious. Now they can hit $600 or more. No one is laughing anymore.

So we’ve reached the conclusion of another depressing GPU launch in the 2020-202X era. When will it end? Late this year? Hardly. Early next year? End of next year? Who knows. But this review has become mired in the grim reality of graphics cards today.

In the imaginary world of MSRP and availability, AMD’s new Radeon RX 6600 is a good option for high-end 1080p gaming in the current market, and one that can compete with the RTX 3060, depending on the title. In addition to good performance, the RX 6600 doesn’t draw much power, and our XFX SWFT 210 sample was very quiet as well.

The product is on loan from AMD for the purpose of this review.

The product remains the property of AMD but is on extended loan for future testing and product comparisons.

AMD had no control over the content of the review and was not consulted prior to publication.

Neither PC Perspective nor any of its staff were paid or compensated in any way by AMD for this review.

AMD has not purchased advertising at PC Perspective during the past twelve months.