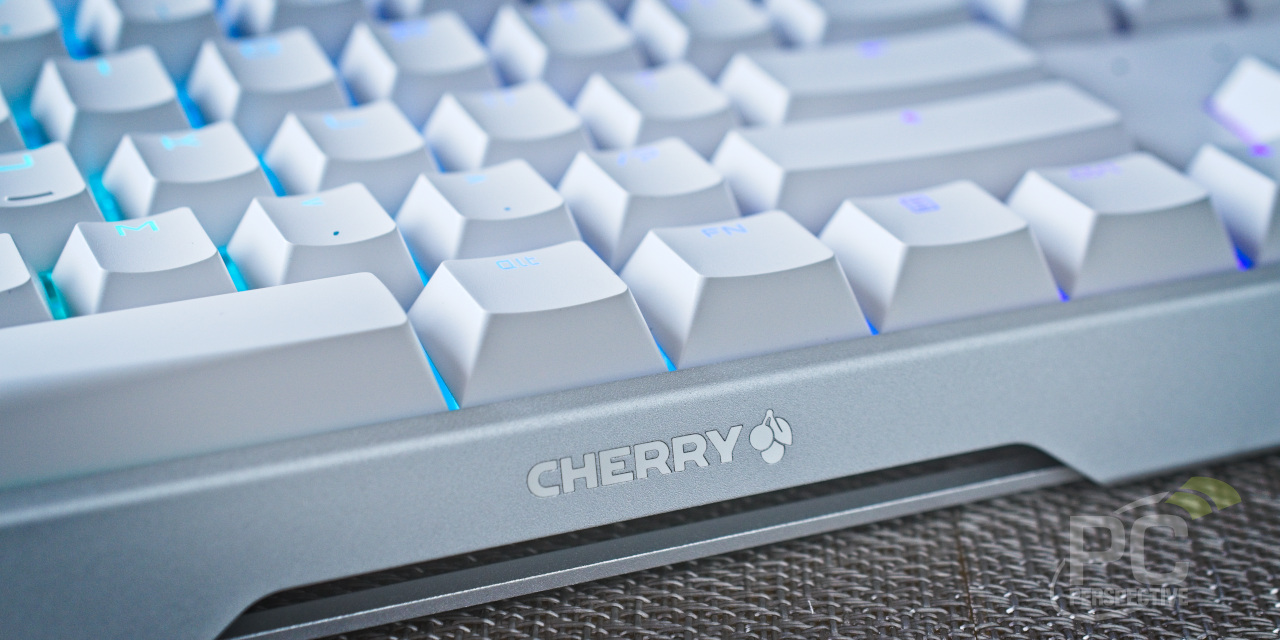 A Sturdy Aluminum Frame Keyboard with a Fresh Design

Now, back in May I did look at a Cherry keyboard (and mouse) via the Stream Desktop kit, but that model used the CHERRY SX scissor mechanisms – not MX switches. And while the Stream Desktop is built for silence, the MX Silent Red switches in our MX Board 3.0 S sample promise to be pretty quiet, too.

This CHERRY MX Board 3.0 S keyboard is available in both black and aluminum/white versions, and we received the latter for this review. And while both color variants are built on a sturdy aluminum deck, the white version’s keycaps are double-shot PBT rather than the standard black version’s ABS. 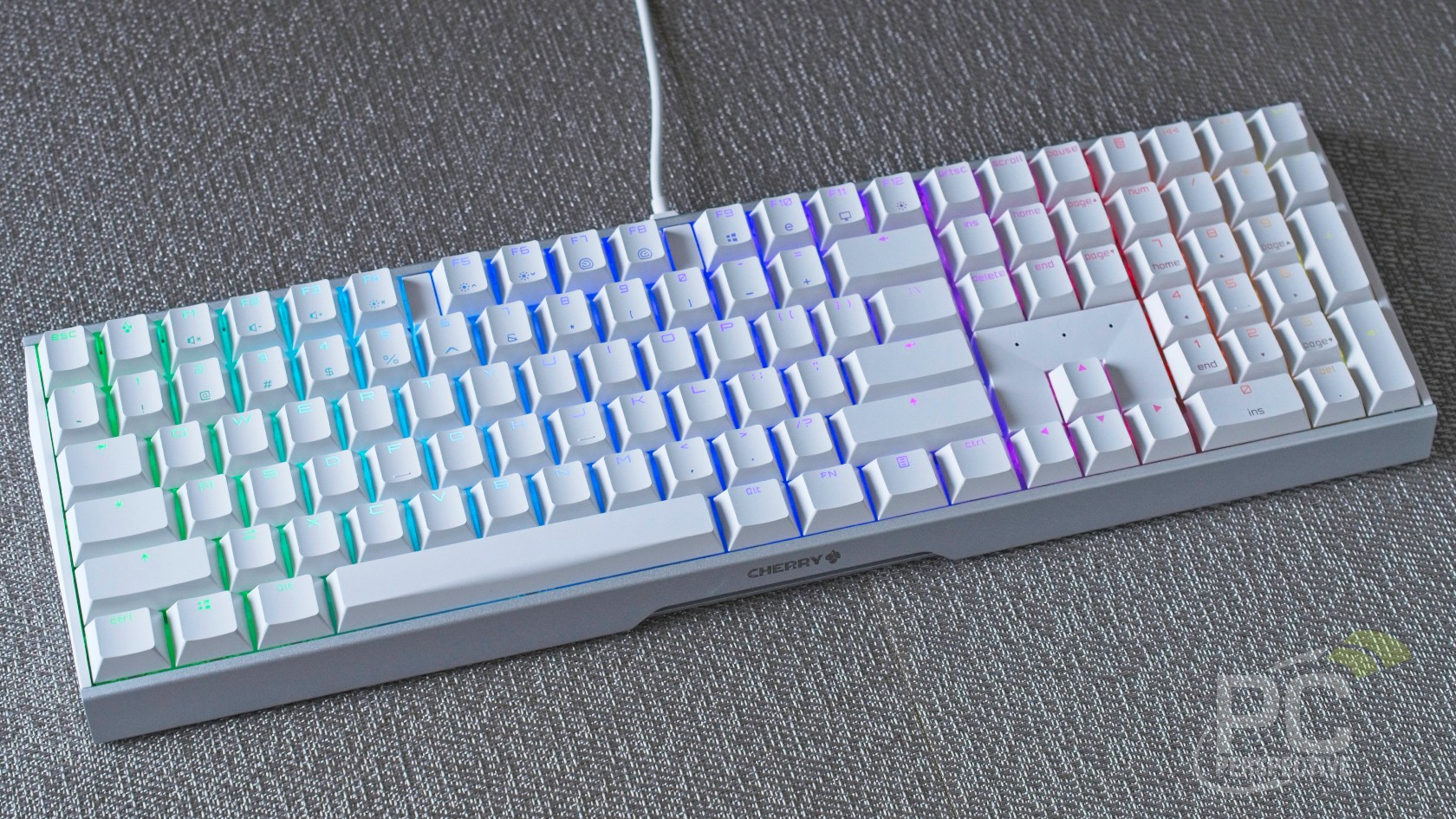 As to pricing and availability, I’m updating this on 11/20/21 to provide that info. The list price for this keyboard – black or white version – is $109.99 USD, and the aluminum/white version as reviewed is currently $99.99 on Amazon.

“The CHERRY MX BOARD 3.0 S is a high-performance gaming keyboard with a choice of illumination, color and switch options. The stylish extruded aluminum housing integrates the genuine CHERRY MX switches, designed for fast play with all the gaming features you need to win.”

Cherry lists these features for the keyboard:

Our sample is equipped with CHERRY MX Silent Red key switches (Cherry describes these as “smooth and silent”), which have the following characteristics: 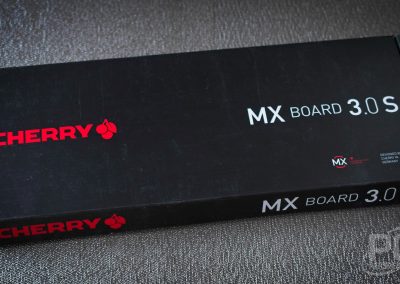 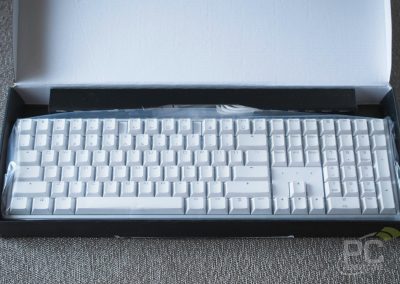 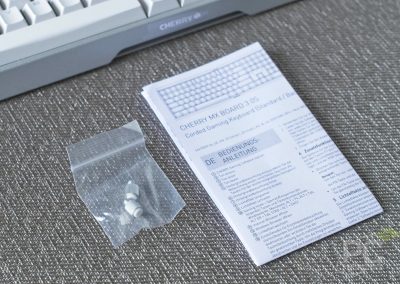 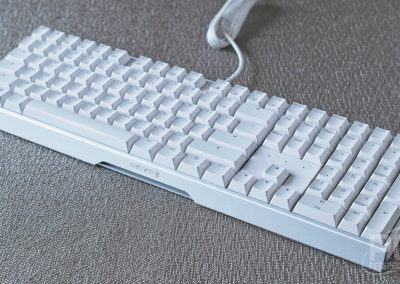 Out of the packaging the keyboard offers a reassuring heft (it weighs approximately 36 oz), with a clean, fresh appearance in this aluminum/white version. One interesting note from the package contents, as height adjustment requires the use of two optional metal screw-in feet. 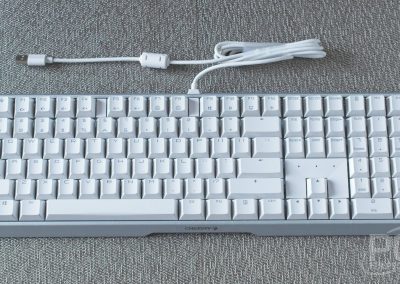 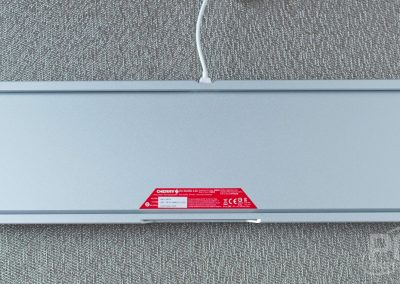 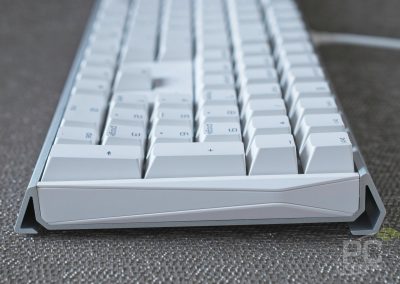 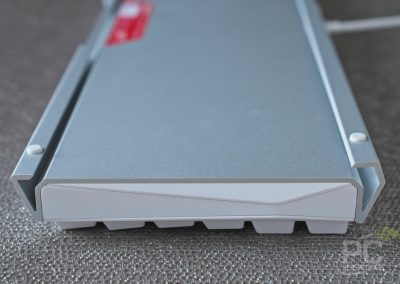 Of particular interest is the base of the keyboard, which is construction from what appears to be one piece of extruded aluminum. White plastic makes up the front and sides, and the keyboard feels very sturdy overall.

This keyboard has a different feel from any mechanical board I’ve used before. How do I describe it? The keys seem to have a slightly shallow action, and depressing them feels a little more resistant than average for shallow actuation (to me, anyway). The feel is obviously a combination of the MX Silent Red switches and double-shot caps – not to mention the sturdy frame. But the biggest part of the experience to me was actually the spacing – which seems to be a bit tighter than what I’m used to, so my fingers felt closer together on the board.

Basically, this CHERRY MX Board 3.0 S has key caps with a bit of a reduced surface for your fingers compared to some, and I interpreted it as being a little more cramped feeling compared to what I’m used to. 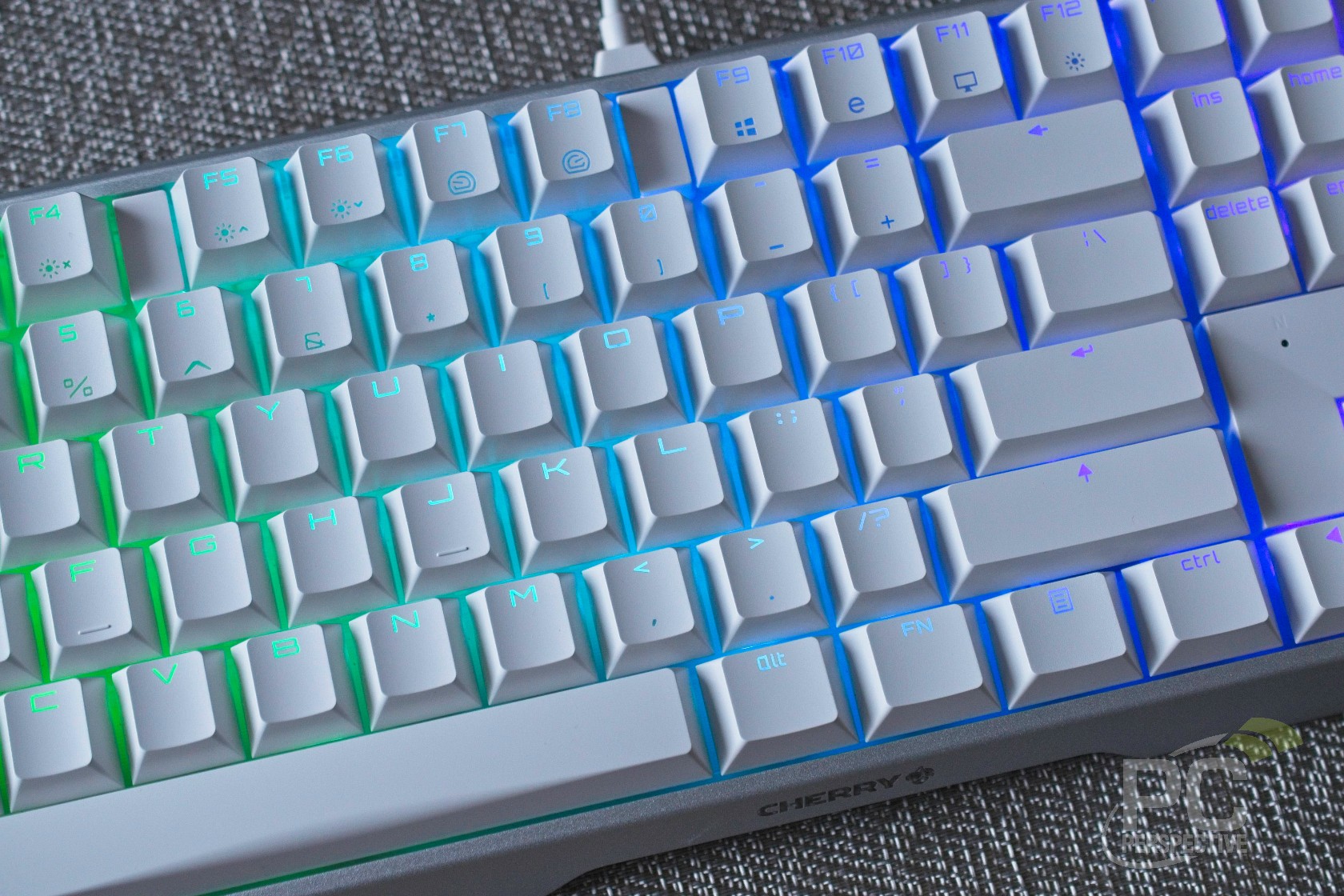 Back to the feel of the keypresses. Now, you probably wouldn’t use terms like “firm” and “tight” to describe your keyboarding experience, but that’s what I’m doing here. As mentioned above, our sample is equipped with MX Silent Red switches, and these don’t produce any more noise than a membrane keyboard. It’s an interesting sensation. The overall experience is actually quite reminiscent of a premium membrane option, rather than a mechanical one – in both noise and feel.

The typing feel reminded me of something unrelated and no longer made – just the sort of incongruous thinking I thrive on. Think back to the era just before Apple adopted the chiclet style keys on all of their keyboards, when iMacs shipped with keyboards that had full-size white key caps. Specifically I’m thinking of model A1048. Those Apple boards were membrane, and had a firm action with only a suggestion of tactile feel. Also, I’m sorry for bringing up Apple – though the anodized silver aluminum with white keys is enough to give one that vibe, don’t you think?

One more aspect of this keyboard’s use is the software, as Cherry offers a utility (called CHERRY UTILITY Software, as a matter of fact) that was quite simple to use: 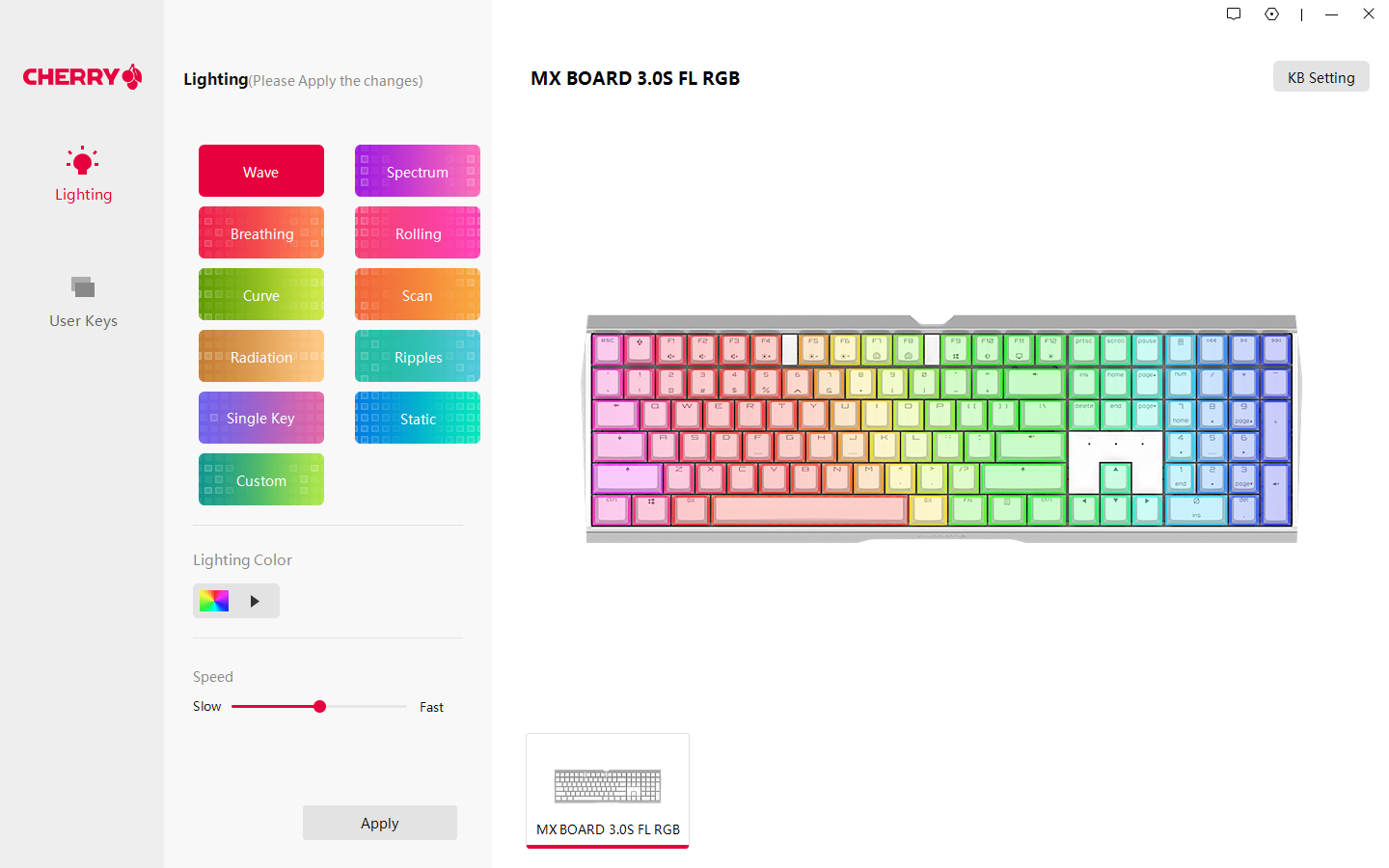 Cherry describes this as “the solution for professionals, enthusiasts and gamers with a compatible CHERRY product. Lighting control, macro programming and numerous detailed settings allow you to customize your hardware”. It is a comparatively small download by modern standards (43.9 MB), and doesn’t feel bloated. I have no complaints.

I was very impressed by the quality of this mechanical keyboard, with the CHERRY MX Board 3.0 S providing a premium look and feel, along with some rather elegantly understated RGB effects. The double-shot white key caps on our sample look and feel great, and the CHERRY MX Silent Red switches lived up to the name, with very quiet operation.

Keyboards are a very personal category, and for me the feel with this one was just a bit more cramped than I’m used to. Think nut width on an electric guitar. Sure, the difference between a typical Strat (1.65 inches) and a Les Paul (1.695 inches) only translates into about 1 mm, but I can feel it, darn it. I’m sure I’ve convinced you. Of what, I’m not sure.

Overall, the CHERRY MX Board 3.0 S is a fine example of a mechanical gaming keyboard from the company that makes the MX switches themselves. Having now tested two Cherry keyboards – both SX and MX varieties – I can say that I’m very impressed. I think you would be as well.

The product is on loan from CHERRY for the purpose of this review.

The product remains the property of CHERRY but is on extended loan for future testing and product comparisons.

CHERRY had no control over the content of the review and was not consulted prior to publication.

Neither PC Perspective nor any of its staff were paid or compensated in any way by CHERRY for this review.

CHERRY has not purchased advertising at PC Perspective during the past twelve months.

If this article contains affiliate links to online retailers PC Perspective may receive compensation for purchases through those links.