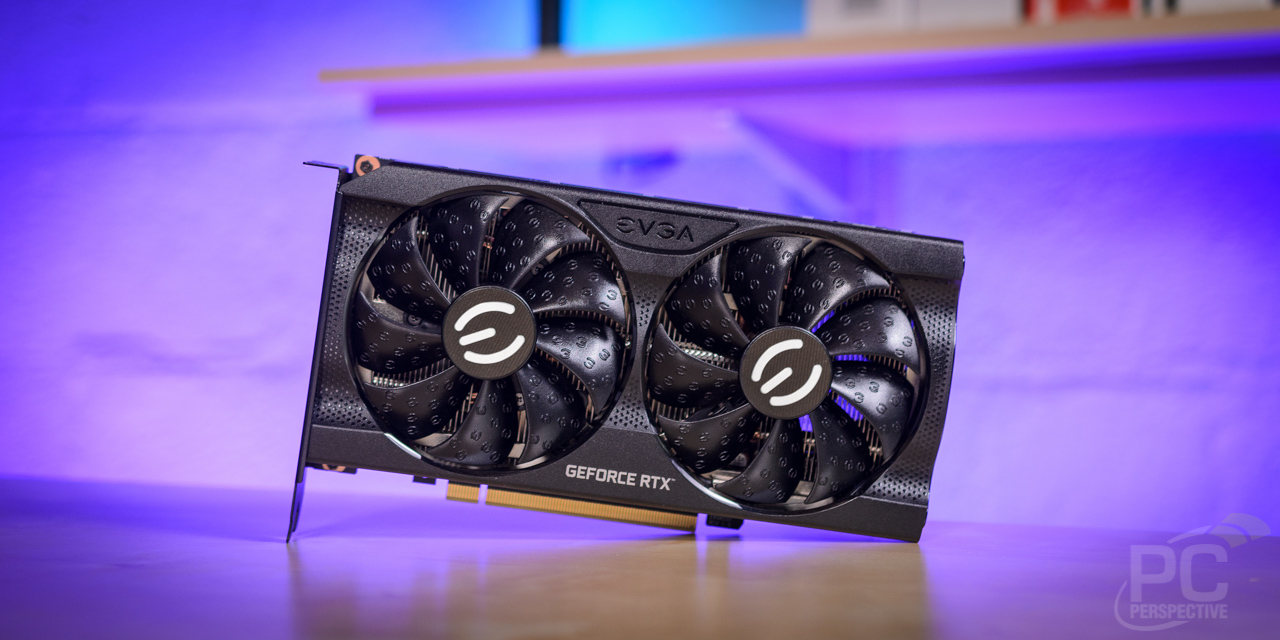 When NVIDIA’s RTX 3060 launched back in February 2021, quite a bit of the narrative in that review related to its intentionally poor mining performance, being the first of the LHR (light hash rate) GPUs. It’s almost a year later, and LHR versions of NVIDIA GPUs are par for the course, when one can buy an NVIDIA GPU at all, that is.

Okay, so maybe the narrative was almost entirely about availability and pricing, and the LHR thing ended up having a lot less of an impact on the general availability of the RTX 3060 than prospective buyers could have hoped. Let’s just hope that Ethereum (and all other crypto) crashes to unprofitable levels soon, so this madness can finally end. 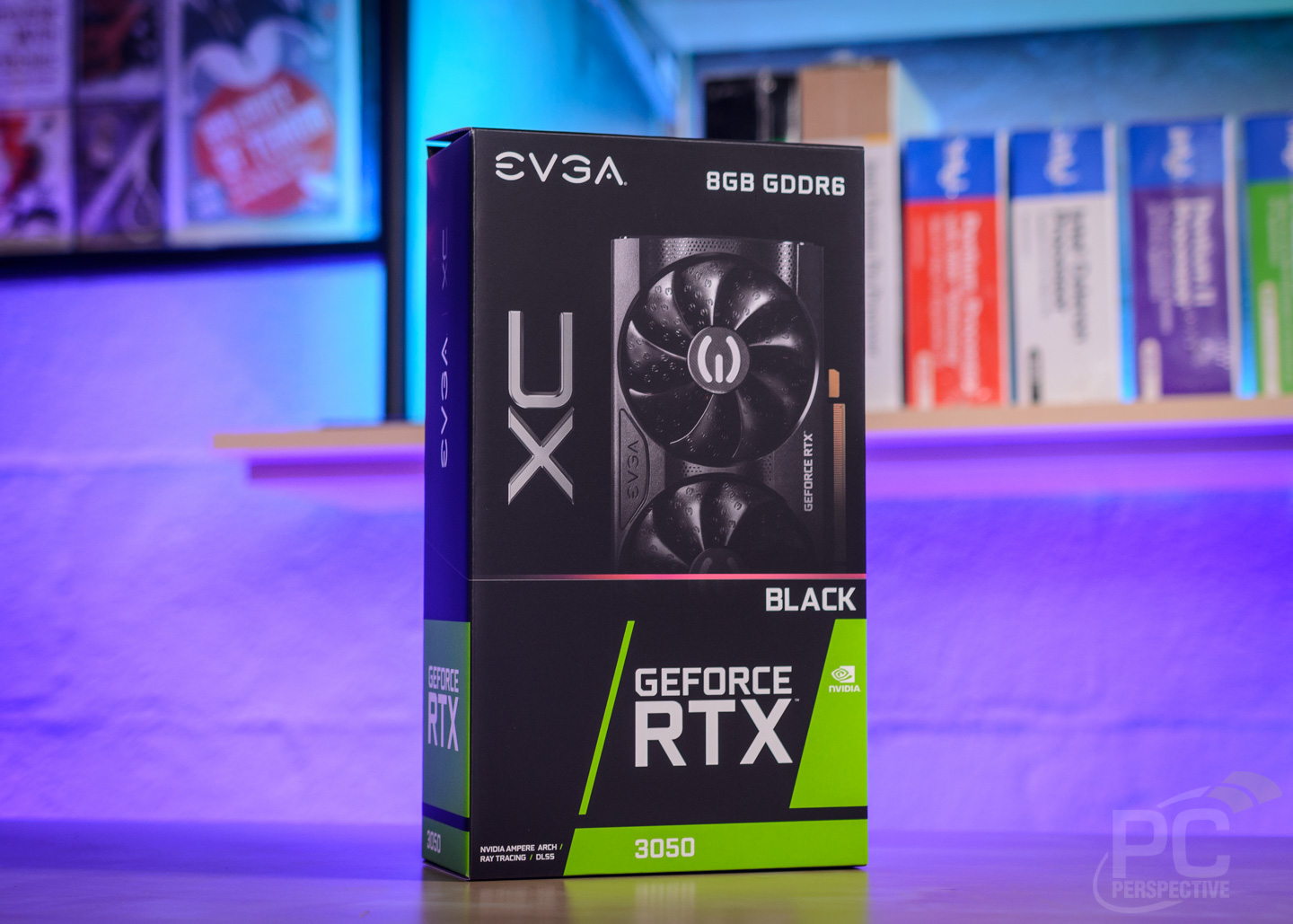 Rather than continue listing random specs, let’s look at a table:

While obviously sporting lower-end specs than the rest of the RTX 30 Series, I can remember when 2560 CUDA cores was a big deal (GTX 1080, anyone?). Rather, it’s the memory interface which will likely hold the GPU back. Now, 8GB is perfectly reasonable amount of VRAM for a card in this segment, but a 128-bit interface with 14 Gbps GDDR6 can only produce up to 224 GB/s of memory bandwidth – down from 360 GB/s with the RTX 3060.

I’m sure every outlet that received the EVGA sample that we did faced the same dilemma before publishing their reviews: do we re-test with the correct VBIOS for the EVGA XC BLACK after being informed late Monday that it was actually the faster XC card’s VBIOS that shipped, or leave the results as is, with a disclaimer? Guess which option I chose?! (Consider this your disclaimer.) 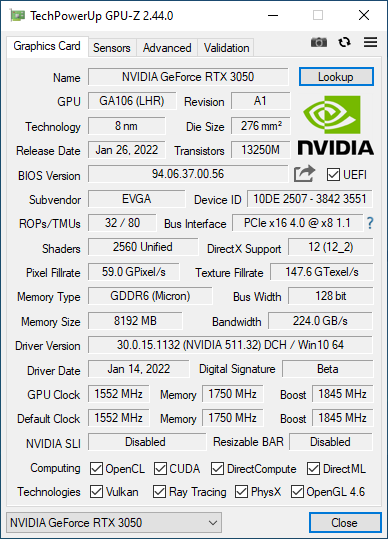 Bottom line, the faster RTX 3050 XC offers a Boost clock of 1845 MHz, vs. the stock 1777 MHz, a 68 MHz overclock. Not much, and EVGA informed us that this translates into a 1% – 3% performance uplift compared to the stock XC BLACK version. Also, the XC (non-black) has a backplate. It also carries a higher list price (naturally).

Forgetting the VBIOS SNAFU for a moment, let’s look at the XC BLACK card we received: 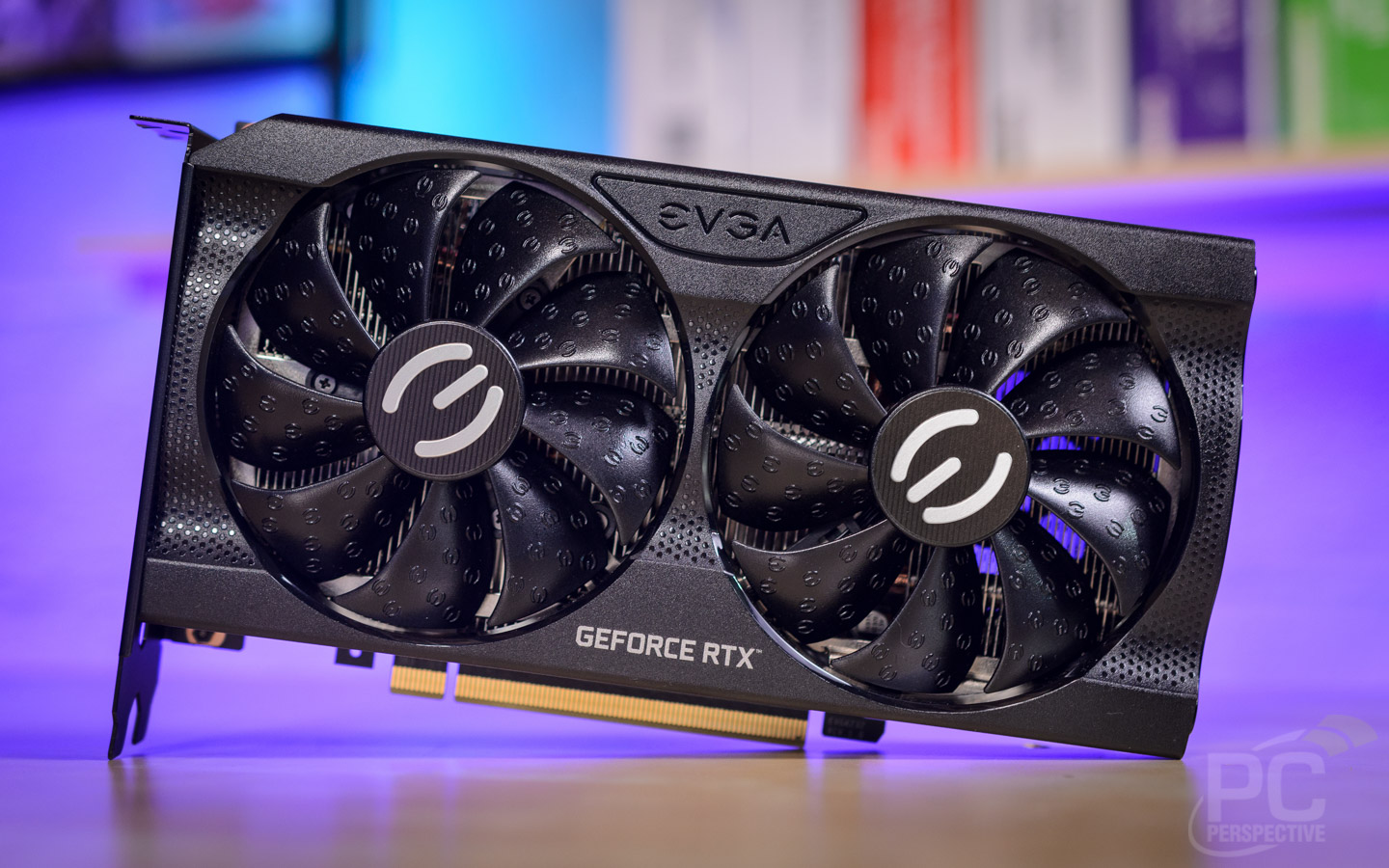 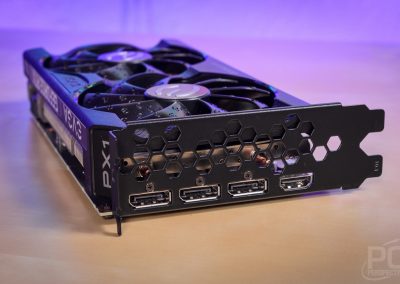 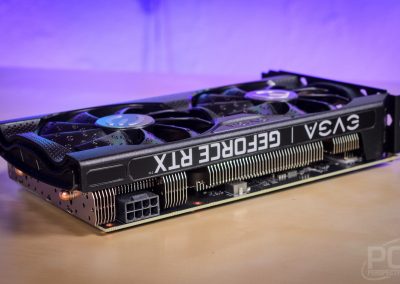 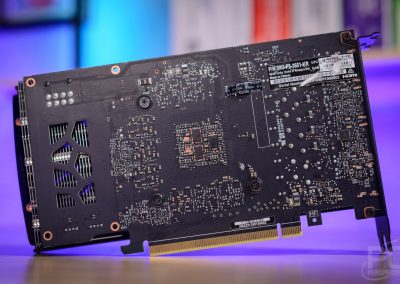 Something about the card I didn’t notice at first: the RTX 3050 uses a PCI-E 4.0 x8 interface. This wasn’t apparent just looking at the PCB, since it’s still electrically a x16 card. 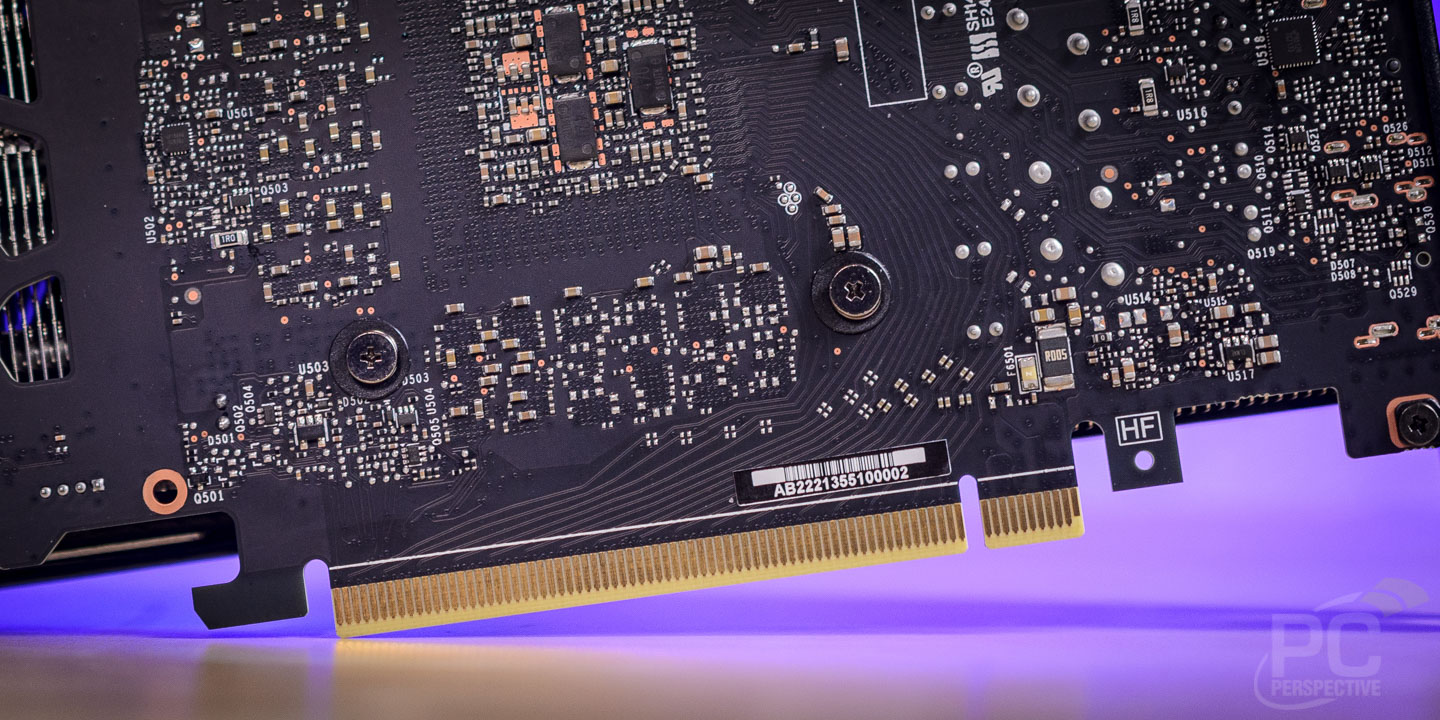 It has been said that this x8 limitation exists to allow for another GPU (i.e. GA107) to be used in place of GA106 the future. As to testing Gen4 vs. Gen3 PCI-E x8 performance? No thanks! We aren’t talking about a x4 interface this time, and x8 Gen4 is equivalent to x16 Gen3. There’s more than enough throughput available (heck, the GTX 1080 Ti used a Gen3 x16 interface, and it’s a much faster card!). You should still use the RTX 3050 at Gen4 to match that Gen3 x16 connection, but I think we’re all going to be OK.

Now, let’s forget all about the XC BLACK version pictured above and look at results from the VBIOS-enhanced XC non-black version with the faster clocks, below!

This section is a bit of a mess, but the results at lower settings – something I did due to all-new testing for the AMD Radeon RX 6500 XT review last week – prompted me to test again at higher settings, and against a different group of GPUs. Instead of shifting the review to one GPU group or the other, I left them both in. Thus, in the charts below you’ll see lower-end GPUs represented on the 1080 medium/high charts, and higher-end GPUs represented on the 1080 high/ultra charts. It sort of makes sense! 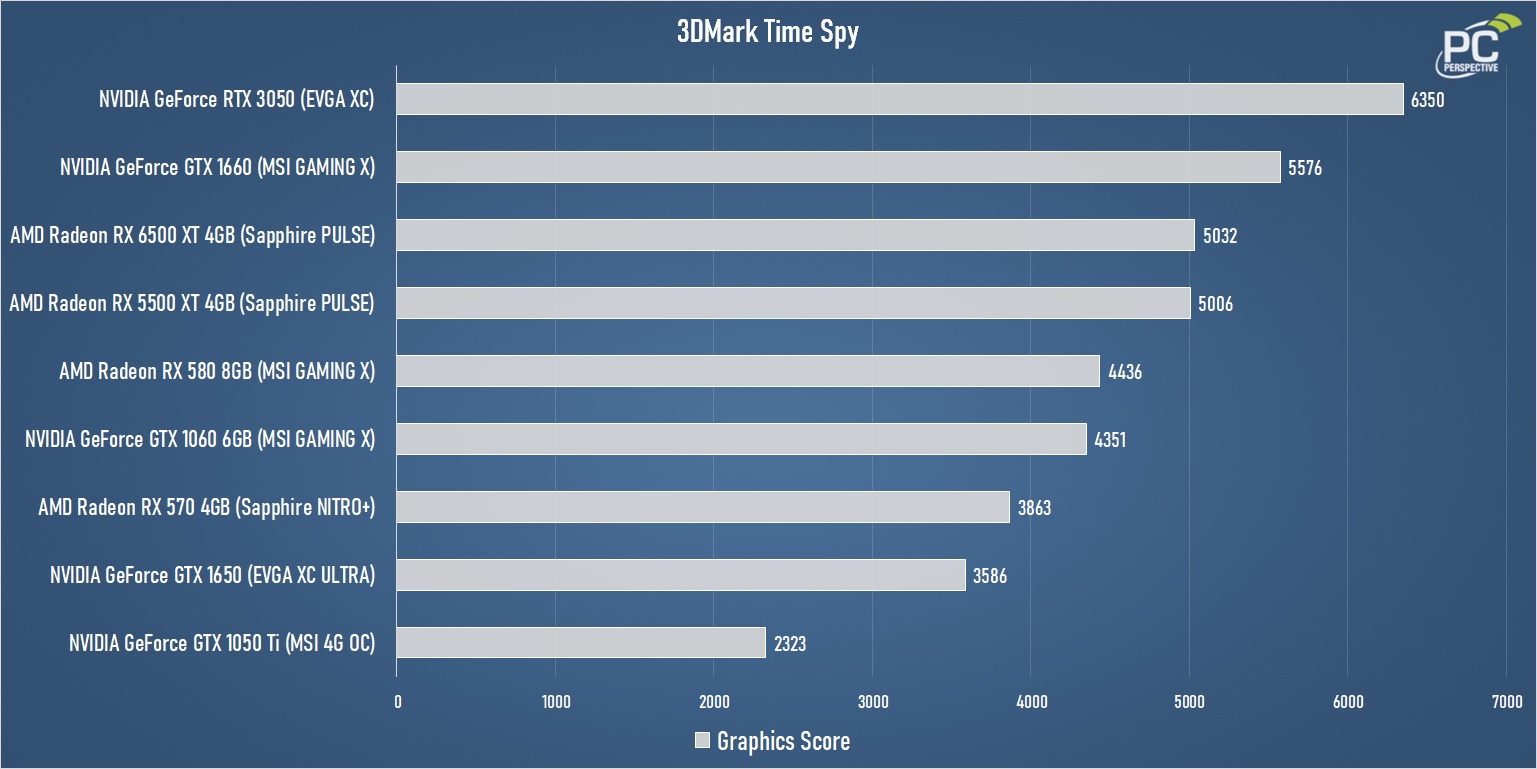 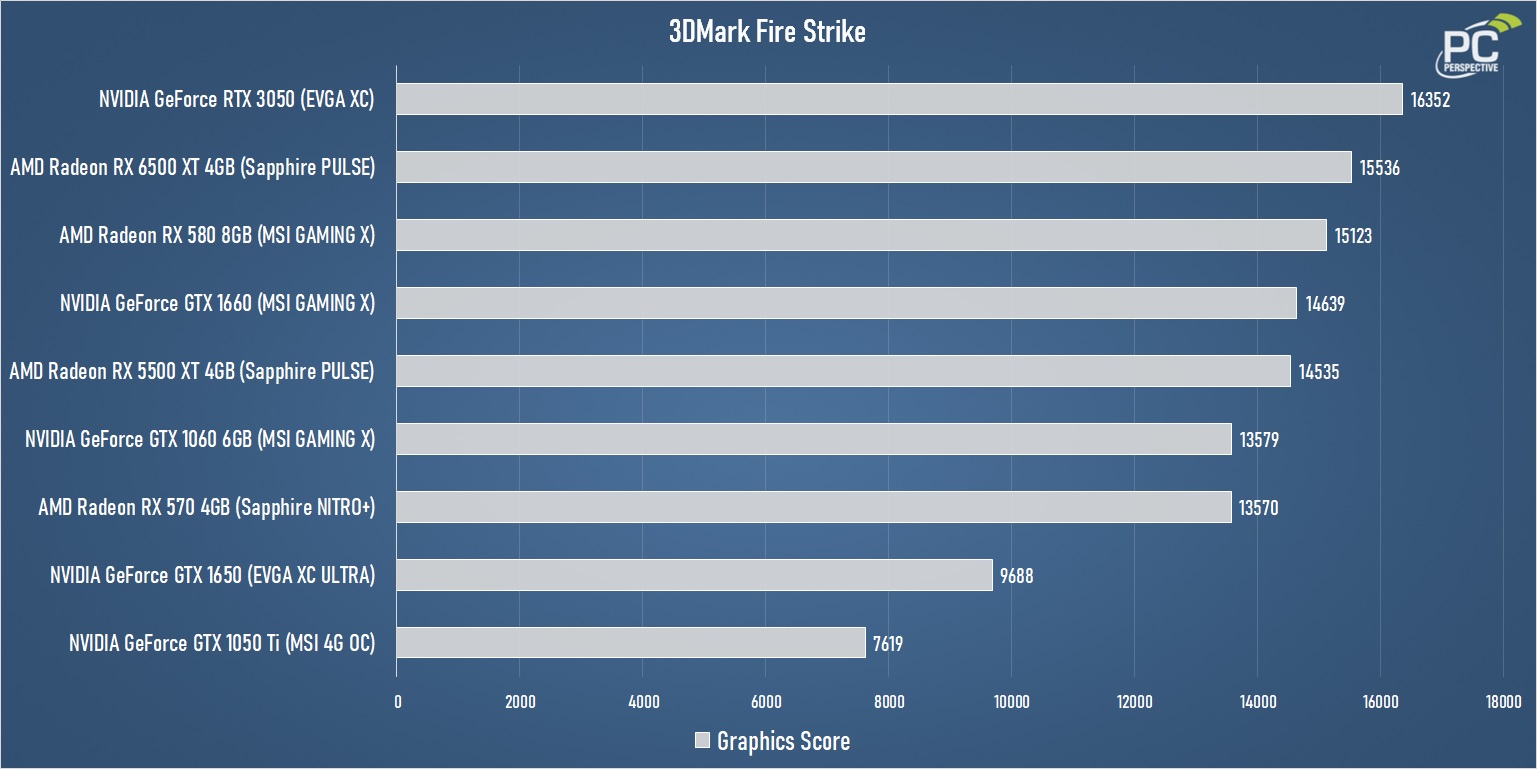 Given the position of the RTX 3050 on the 3DMark charts above, one might assume that it will be the fastest card of this small group. And one’s assumption would be correct.

Note: by “medium” testing I actually mean medium/high, as medium settings were used in demanding tests, and high was used in older, less demanding tests. In all cases the settings were 4GB VRAM friendly, to prevent issues with cards like the GTX 1050 Ti and RX 6500 XT. 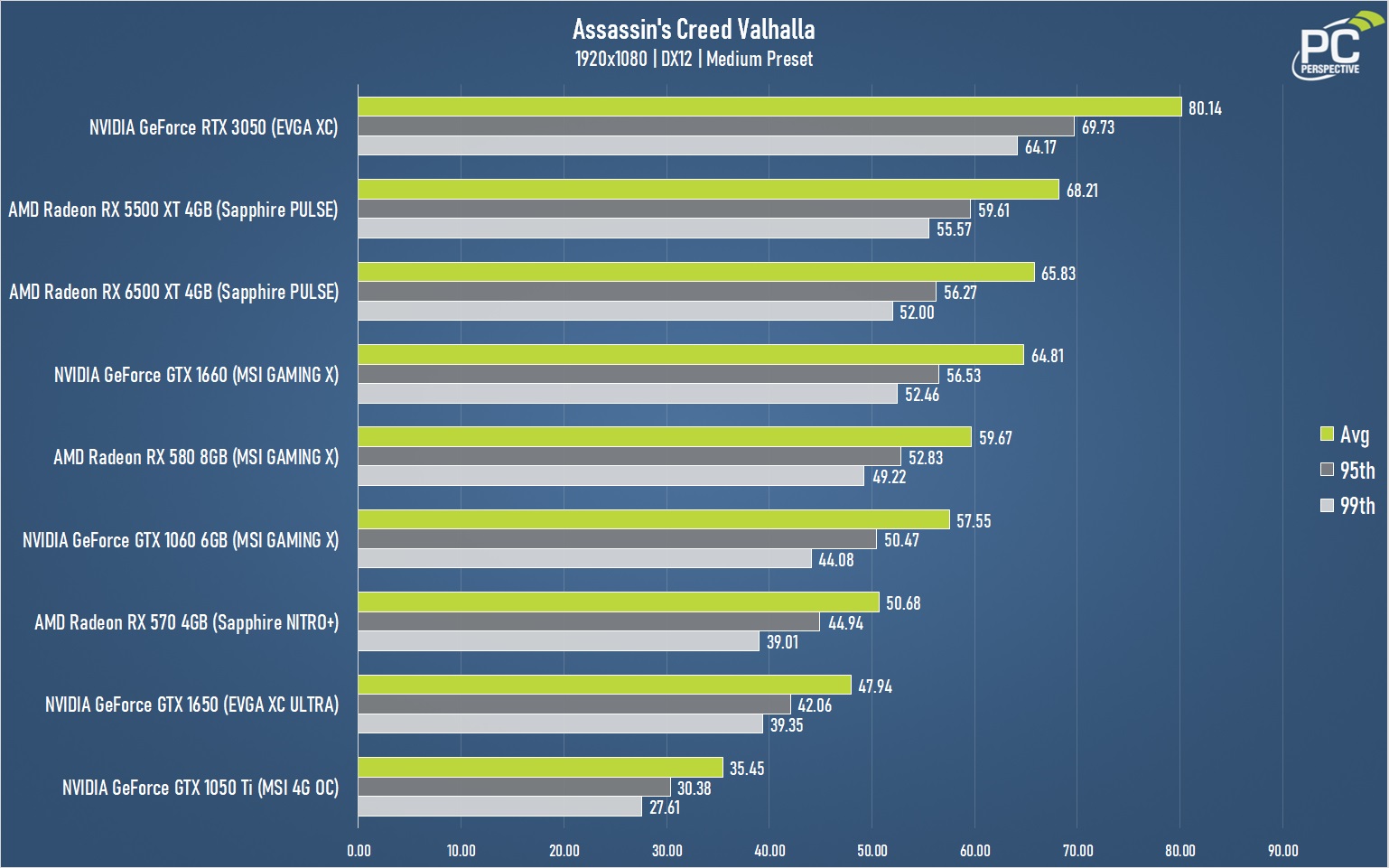 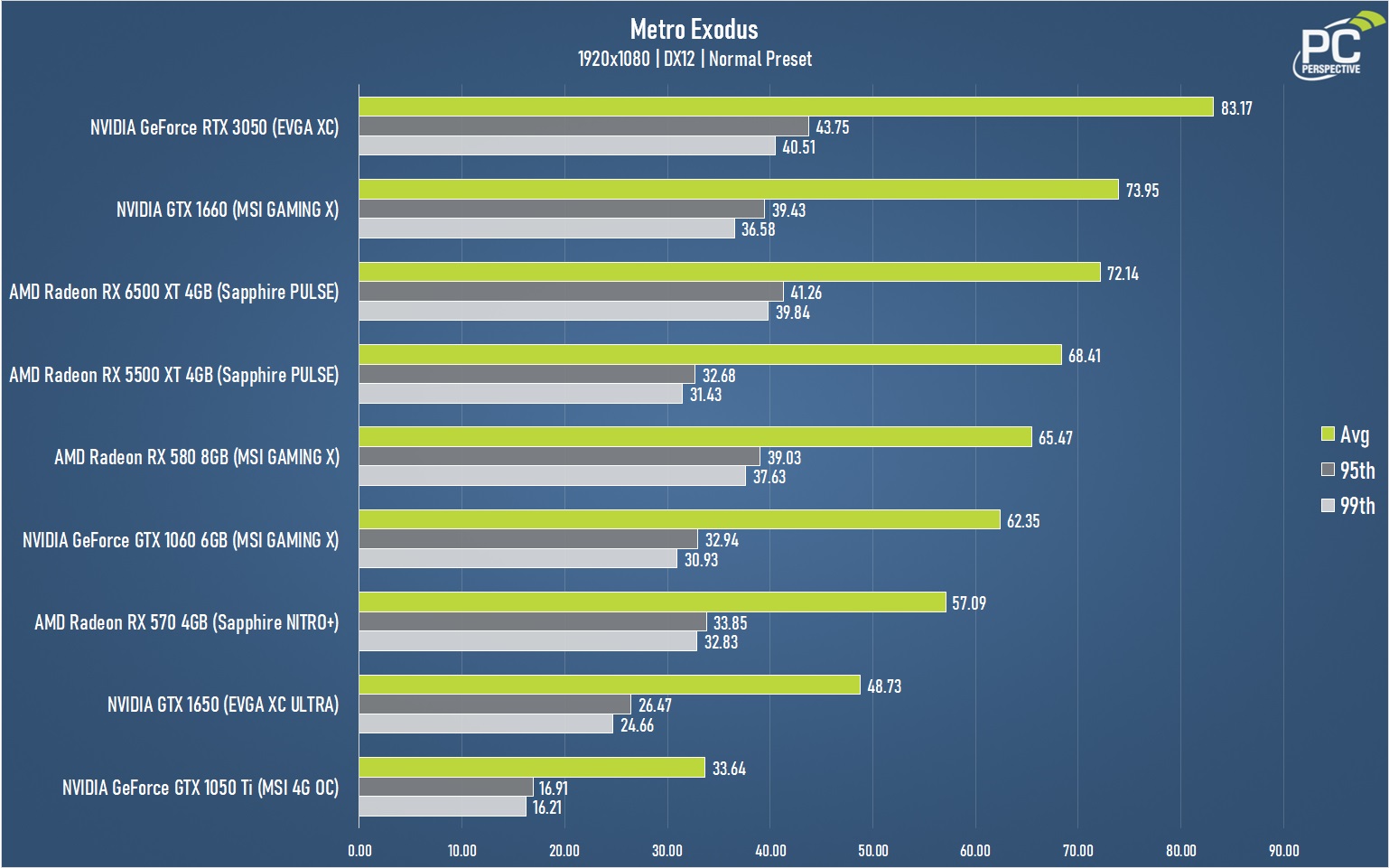 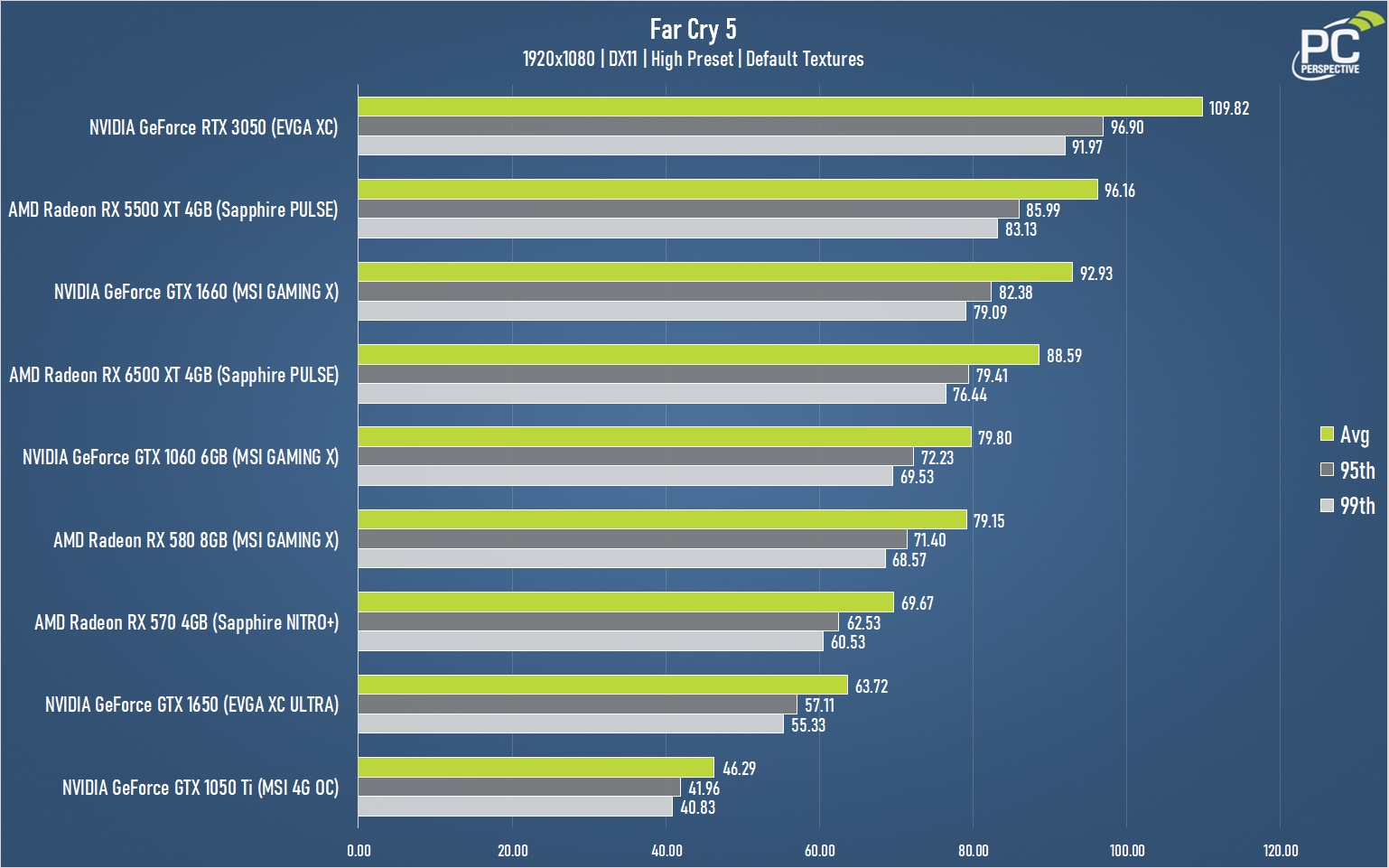 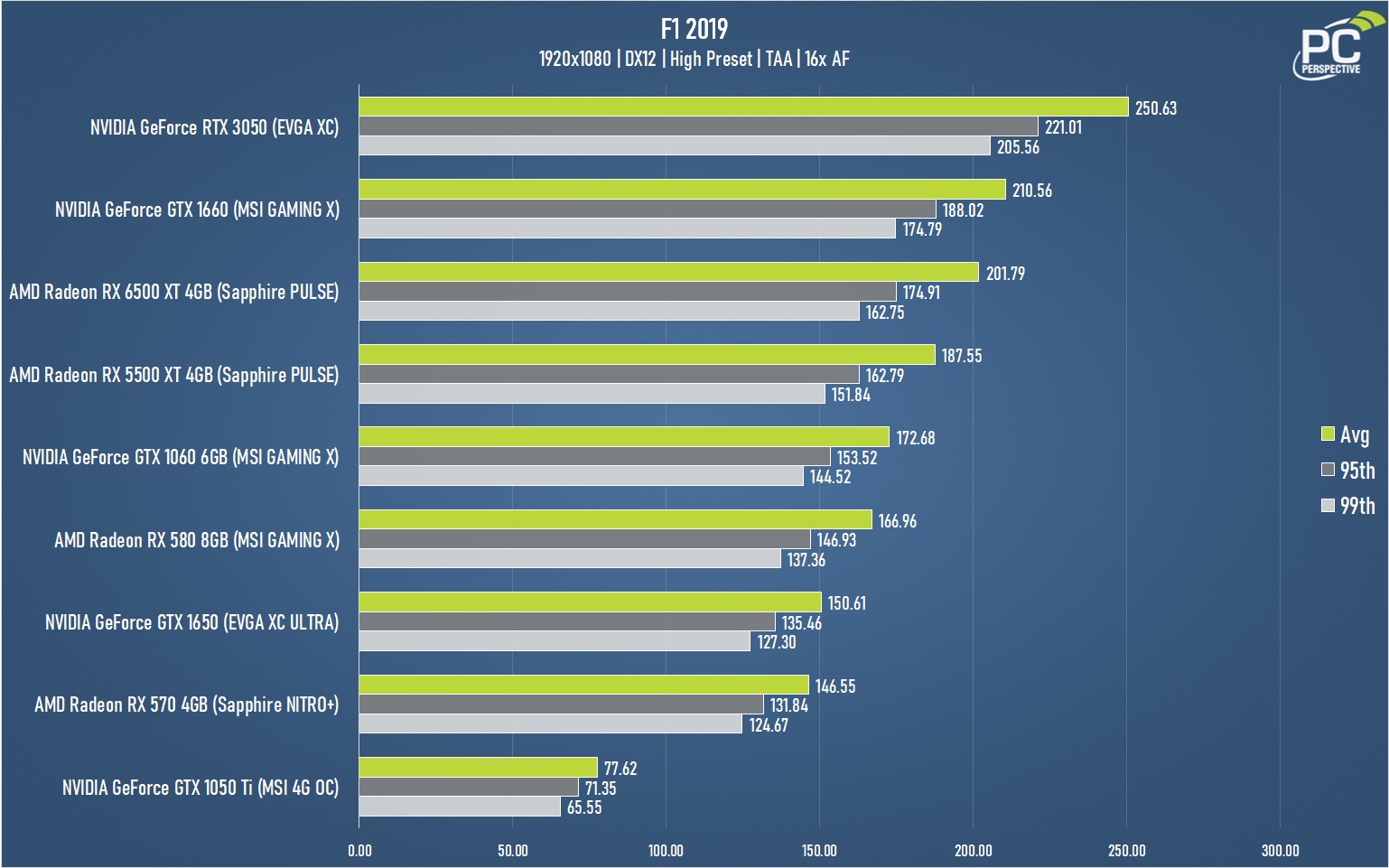 Given its position at the top of these charts, it looks like we need to add more cards to the mix, and increase the detail settings a bit. Also, it appears that the RTX 3050 might be around the level of a GTX 1660 Ti. If only I had tested the 1660 Ti… Oh, wait. I DID. (At high/ultra settings.)

Time to switch to the higher-end GPU group for some more benchmarks! 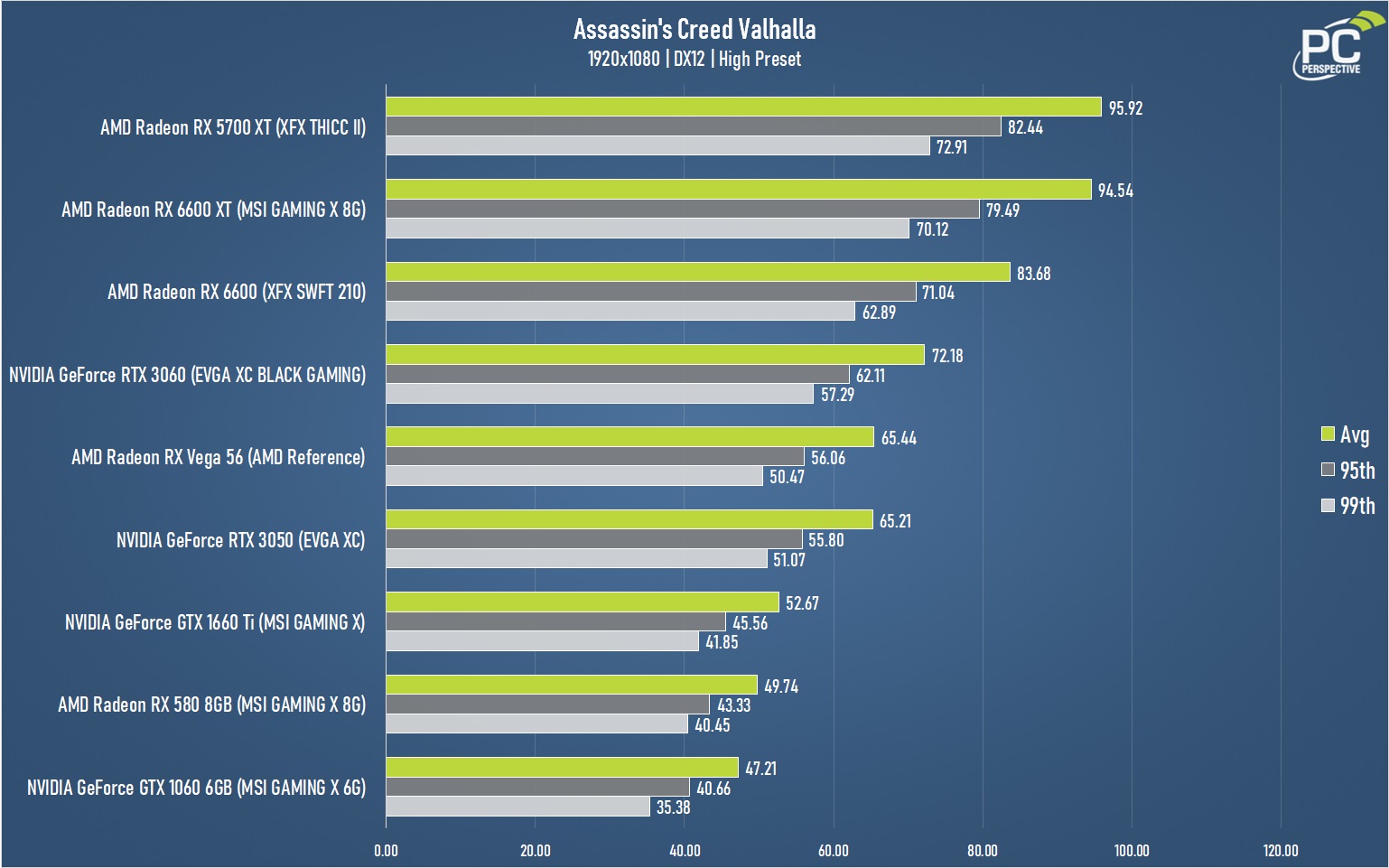 Interesting result here, as the RTX 3050 is quite a bit faster than the GTX 1660 Ti, effectively tied with a Vega 56 in ACV at 1080/high. Let’s see how the card fares in Metro Exodus at the high preset. 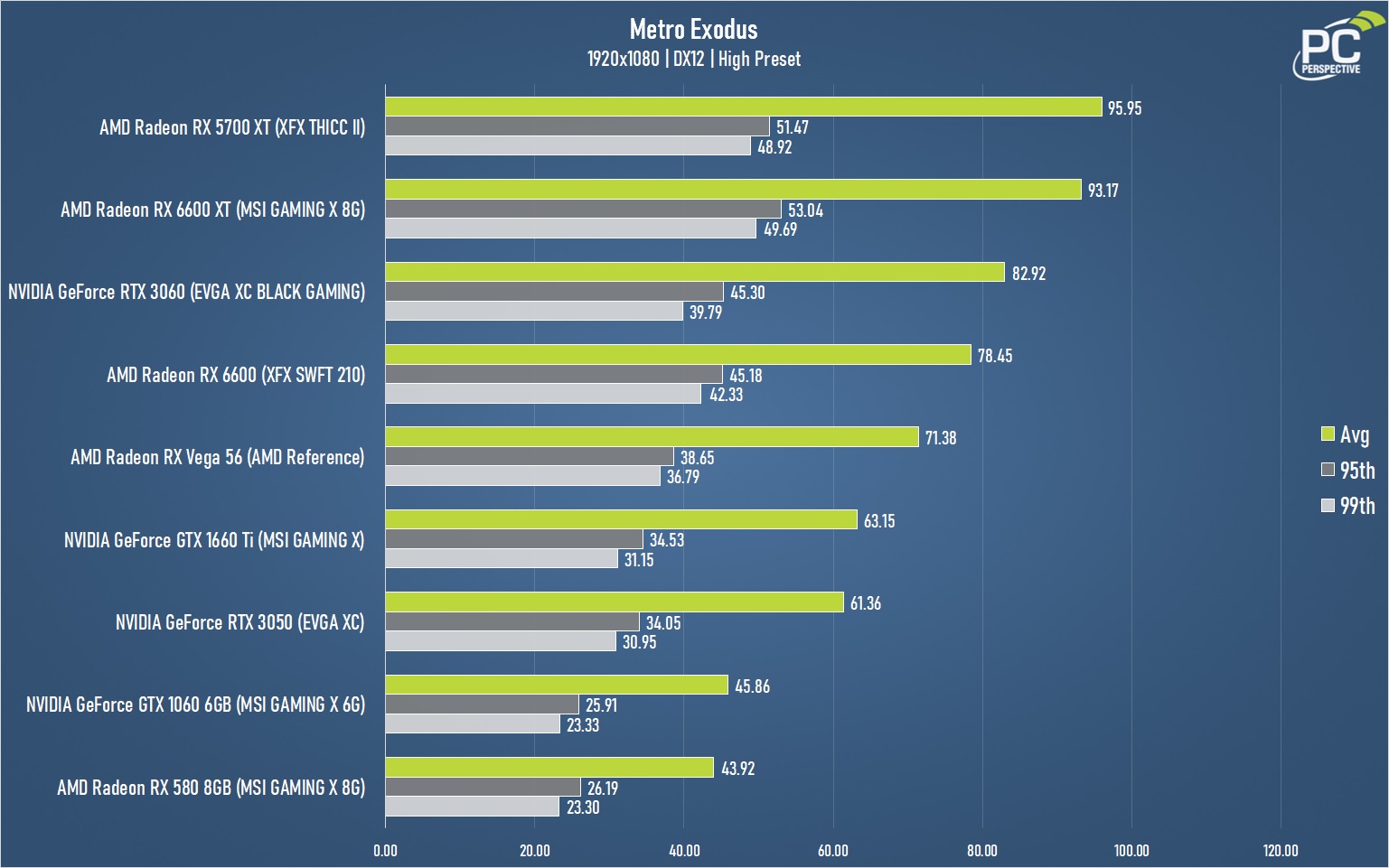 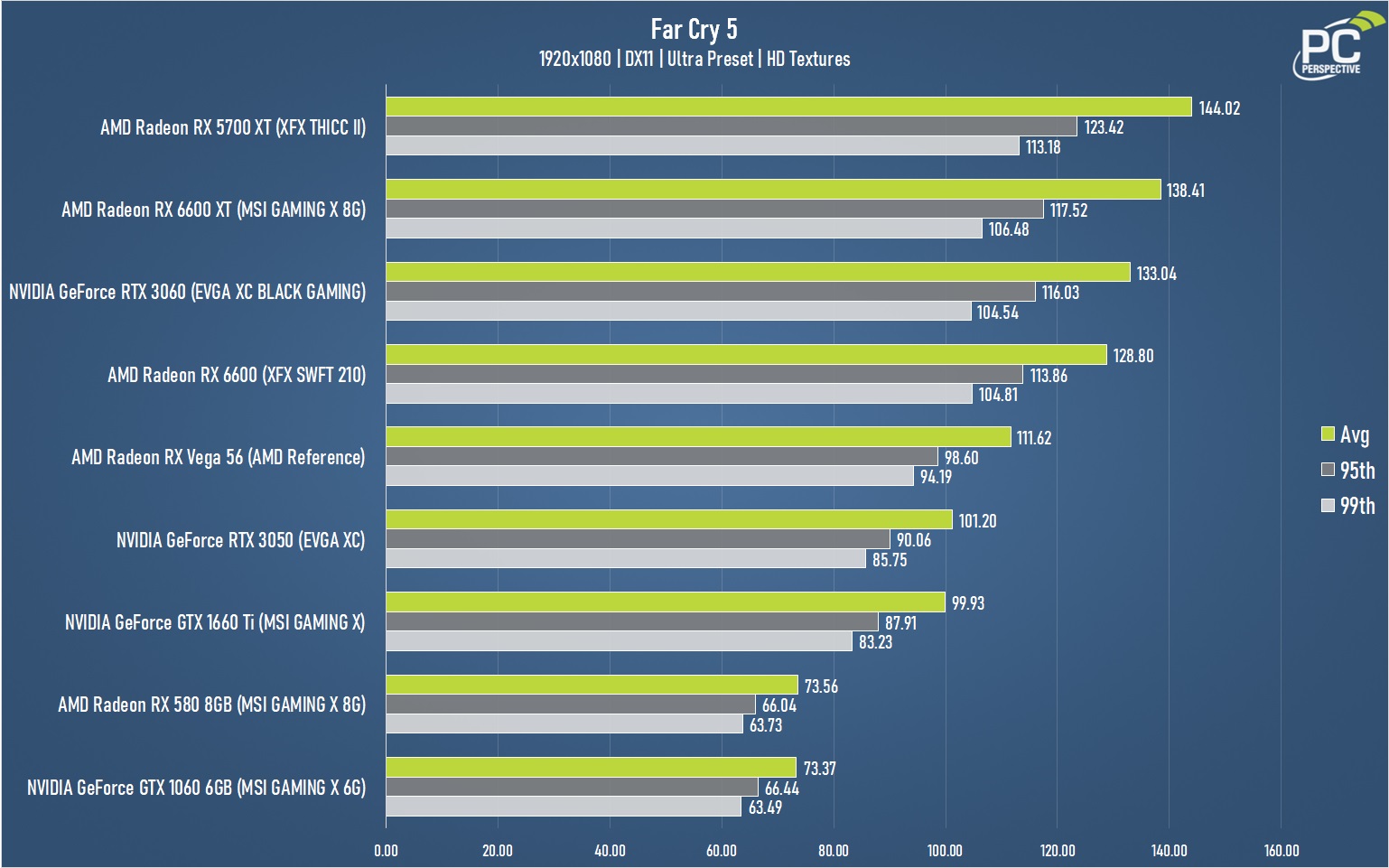 Even at the “ultra” preset, and with optional HD textures enabled, Far Cry 5 still isn’t all that demanding a test anymore. Once again, the Vega 56 is 10 FPS ahead of the RTX 3050, but this time the difference is only ~10% rather than the ~16% with Far Cry 5. The GTX 1660 Ti is only 2 FPS behind the RTX 3050 here, and it does seem that the cards offer similar performance – depending on the game, of course. 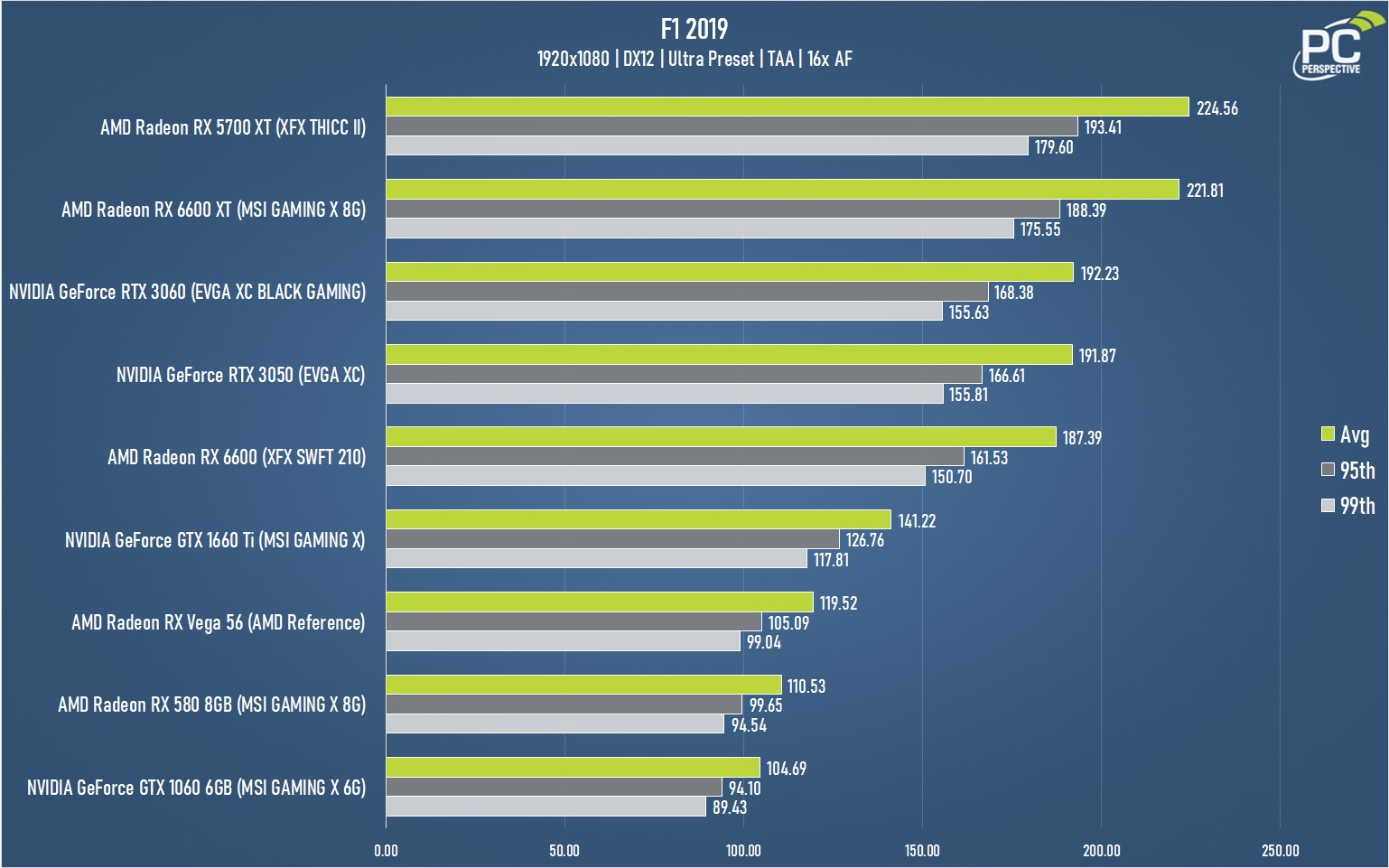 Somehow the slightly-overclocked RTX 3050 is nearly matching the performance of a stock RTX 3060 in this test, though I am suspicious of this result, and will have to re-test the RTX 3060 soon.

We look at power draw next, this time combining all tested GPUs from the various benchmarks. Of interest, the numbers on the chart below include the power needed for the testbed’s Ryzen 7 5800X CPU, 32GB of DDR-3600 memory, two SSDs, and a 280 mm AiO cooler running at full speed. 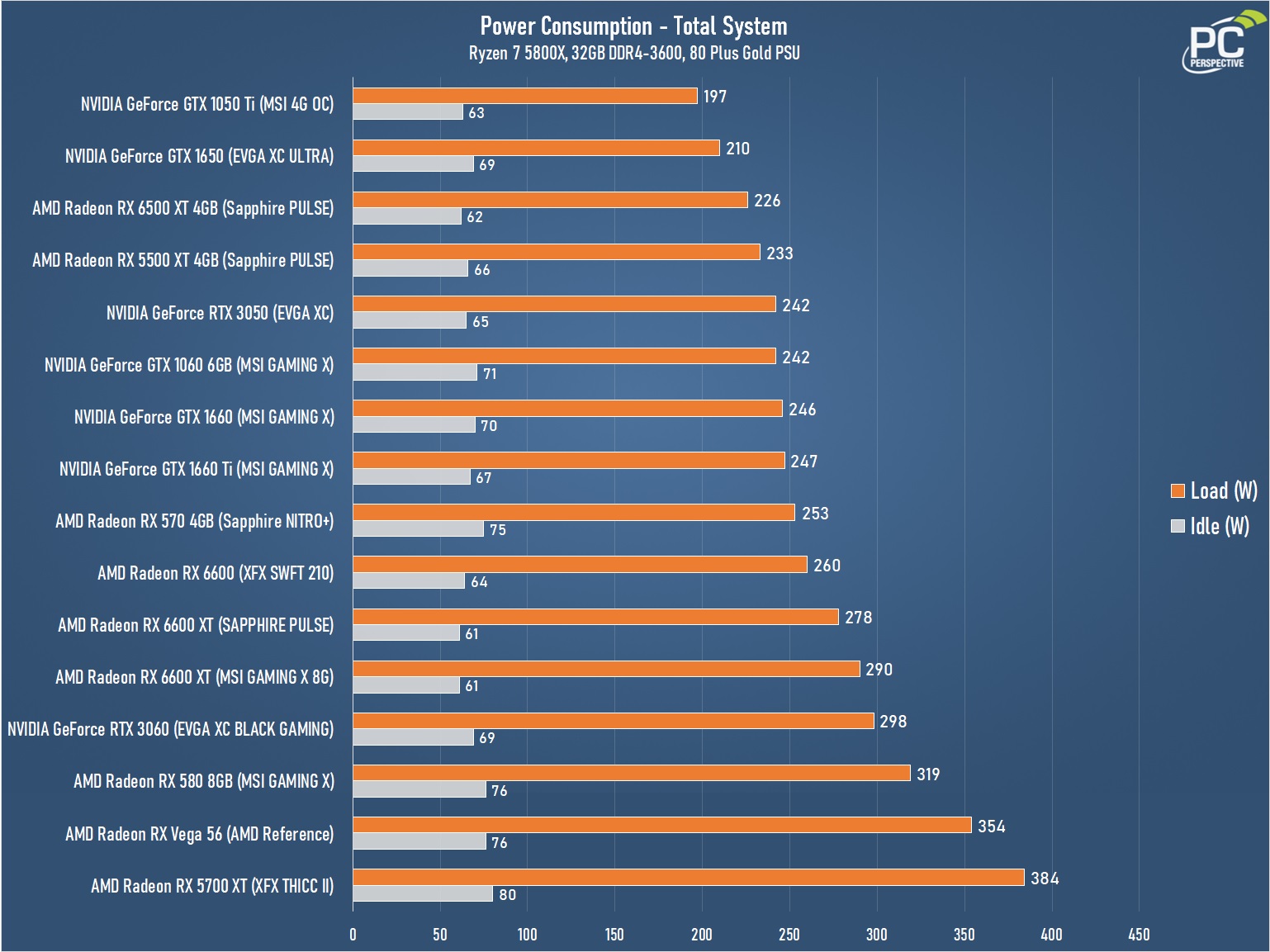 While NVIDIA has something of a reputation these days for high power draw, possibly due to some product called “RTX 3090” (and an upcoming Ti variant of said GPU), the result from this RTX 3050 XC card are quite impressive. With a total system draw of only 242W measured at the wall, the RTX 3050 was pulling exactly the same power under load as a GTX 1060 6GB.

Based on at least some of the results above, it looks like the RTX 3050 could easily be compared to the GTX 1660 Ti, a GPU which launched in February, 2019 for $279. We all know that the graphics card market is out of whack right now, perfectly illustrated AMD’s launch of a $199+ card with just 4GB of VRAM last week. NVIDIA has priced the RTX 3050 starting at $249, so on paper it looks like a good deal – $50 for double the VRAM and better overall performance. 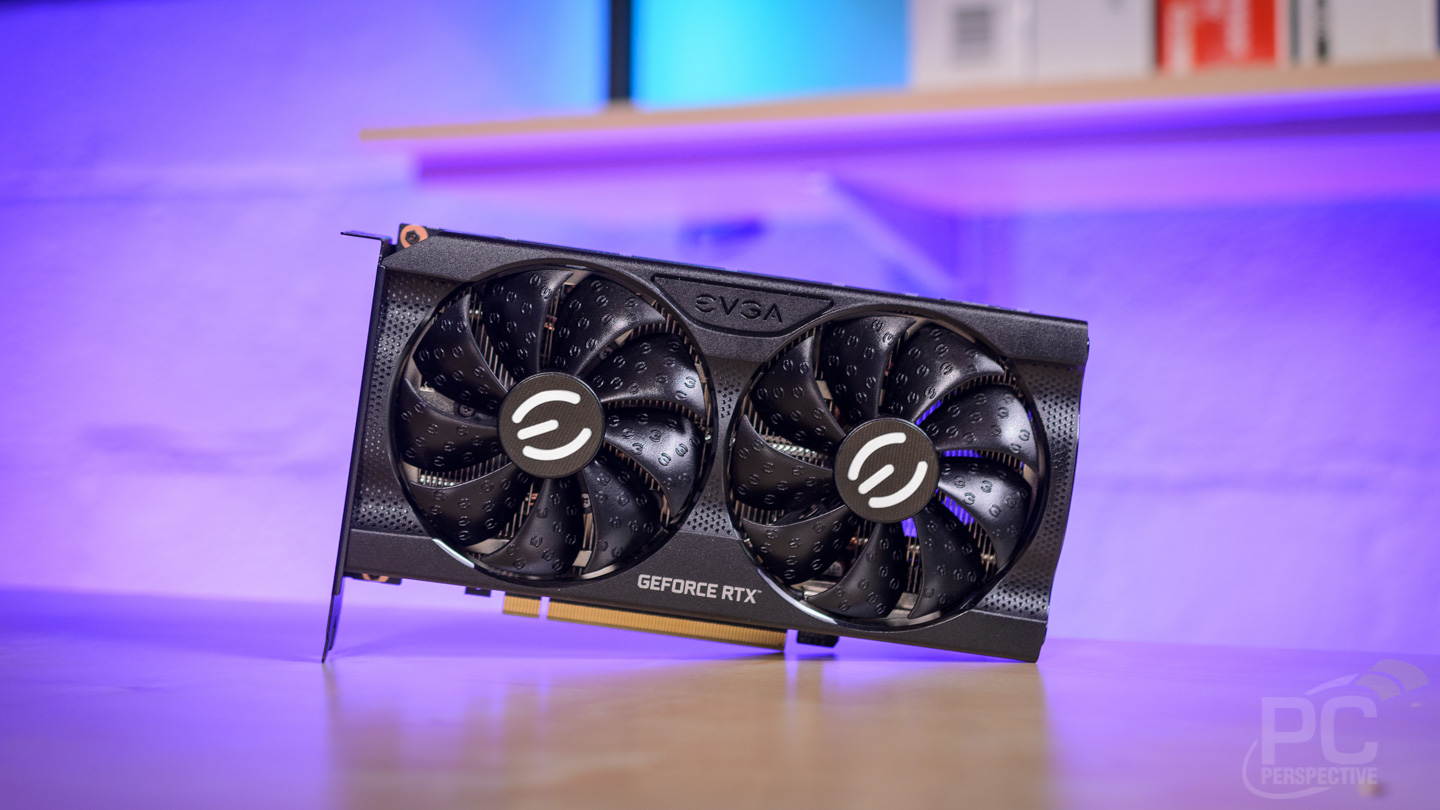 But, given the state of things, it feels like the RTX 3050 will end up being a.) harder to buy and b.) a lot more than $249 when you can find it. I hope I’m wrong. I hope the LHR is never defeated with this one. I hope they make a ton of them, and enthusiasts can actually buy one for less than $300. PC gaming has been a depressing subject for too long, with two years of nearly unobtainable retail GPUs, and insane prices from scalpers. (Much of this thanks to the ridiculously inflated ETH and BTC prices from pandemic-fueled speculation.)

The product is on loan from EVGA for the purpose of this review.

The product remains the property of EVGA but is on extended loan for future testing and product comparisons.

EVGA had no control over the content of the review and was not consulted prior to publication.

Neither PC Perspective nor any of its staff were paid or compensated in any way by EVGA for this review.

EVGA has not purchased advertising at PC Perspective during the past twelve months. 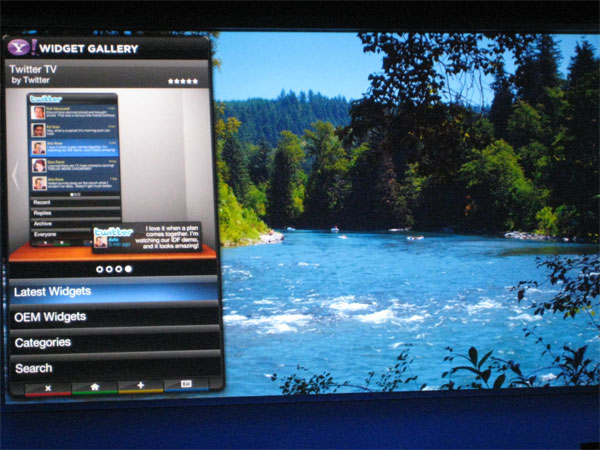 Intel and Yahoo widgets on TVs this CES 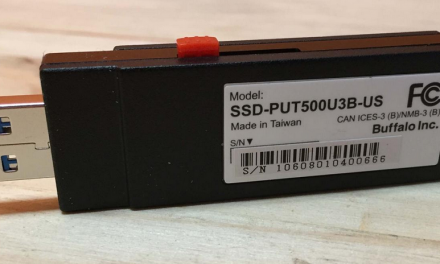