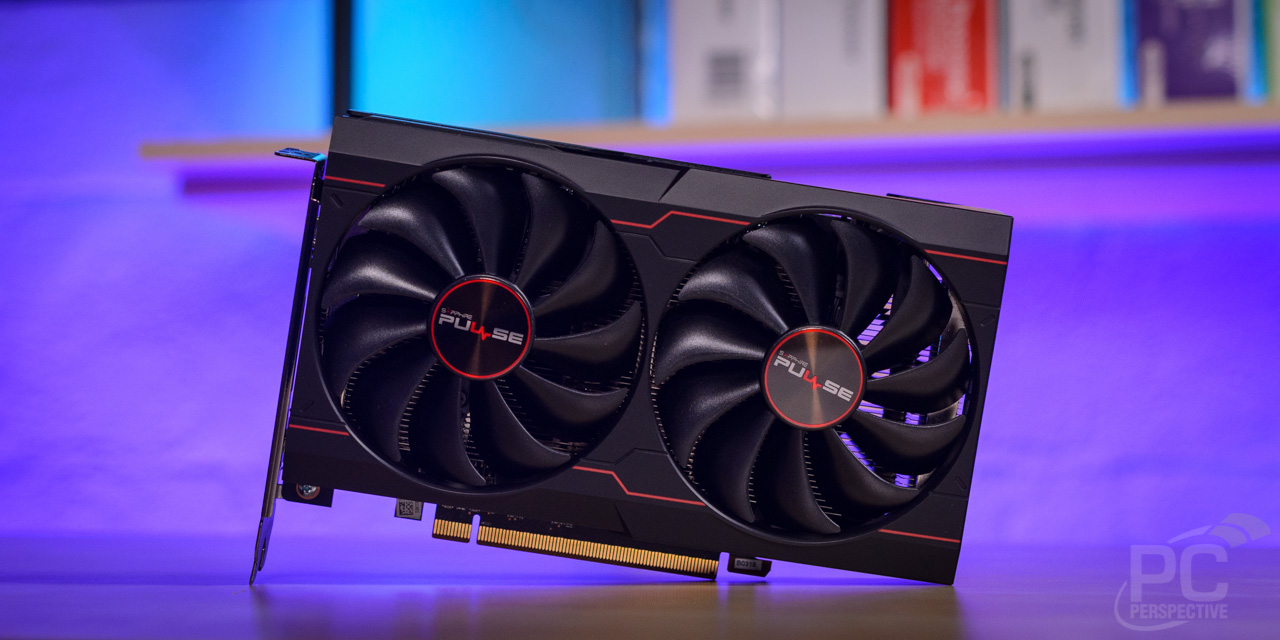 What more can be written or said about AMD’s Radeon RX 6500 XT? There has been quite a bit of negative press, and the enthusiast segment (you know, the primary audience for all PC hardware reviews?) seems to be underwhelmed by the GPU. To say the least.

Yes, I am about to present the arguments that this card serves a purpose, is not “trash”, and that right now is not the right time to release ANYTHING, good or bad. Devil’s advocate, you say? Perhaps! But it is more intellectually stimulating to engage in such arguments than just dumping on a product that offers 2014-2016 performance in 2022.

Also, it is soul-crushingly dull to benchmark at 1080/medium (and 1080/high in older titles). That’s my excuse for not testing many games – or cards. You probably already know the performance level of an RX 6500 XT by now, anyway. Besides, this is as much a review of the the Sapphire PULSE card as it is the 6500 XT GPU itself. 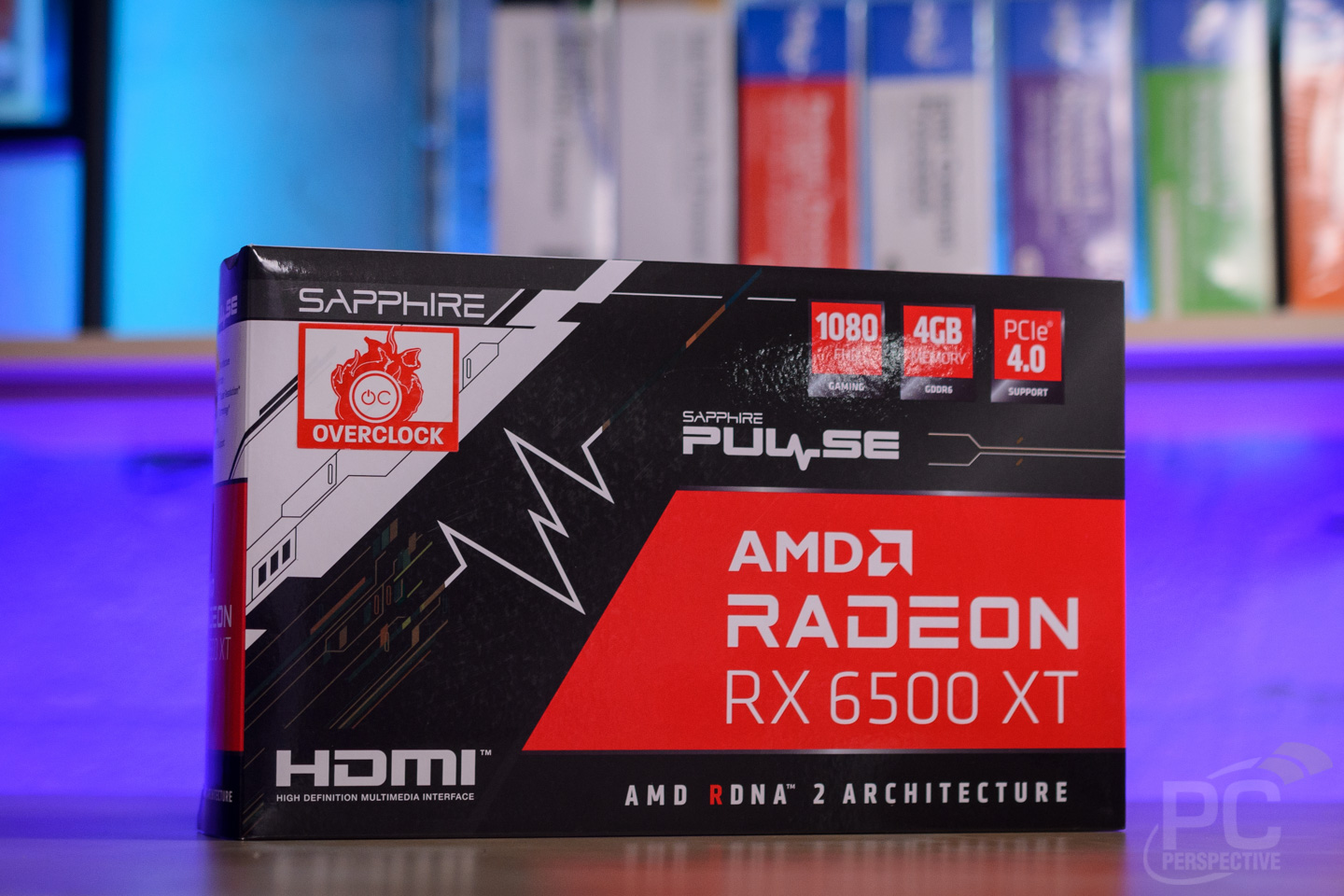 For reference, here are the specs of the Radeon RX 6500 XT, alongside a few of the other members of the current RDNA 2 lineup:

Our Sapphire PULSE sample has slightly different specs from those above – configured with a 130W total board power rather than the 107 W base / 120 W OC from AMD’s official specs. And on the subject of official specs, that memory bandwidth number is quite a bit different once Infinity Cache is included – rising to an effective bandwidth of up to 231.6 GB/s. 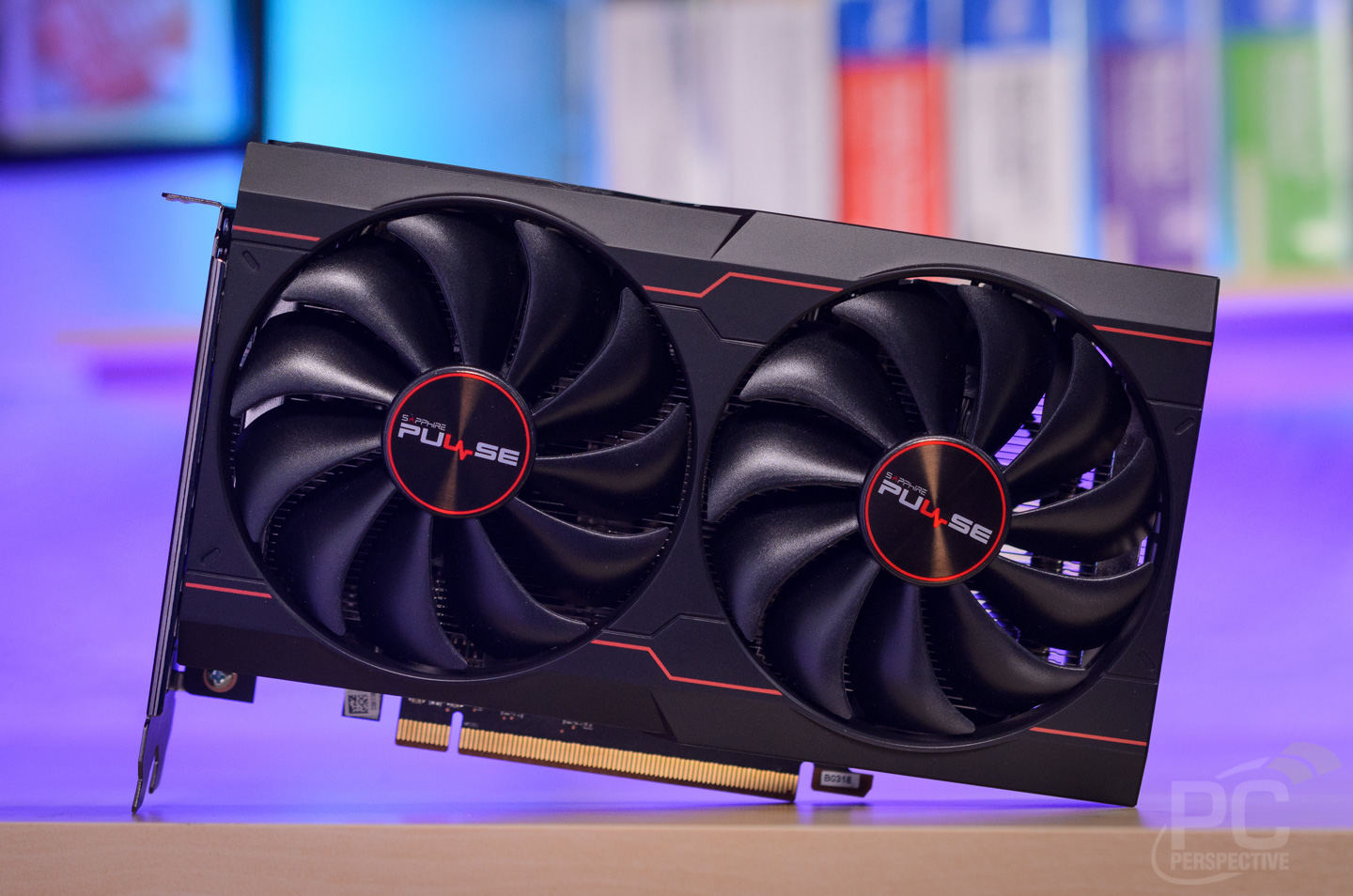 Looking at the images below, you may notice a minimal compliment of display outputs (1x DisplayPort + 1x HDMI) and just a 6-pin power connector on the PULSE RX 6500 XT. There is also a backplate, which seems superfluous but looks nice. 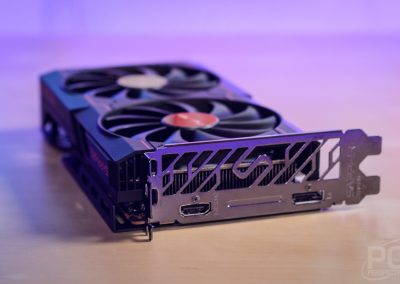 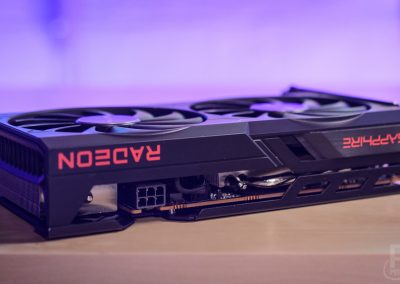 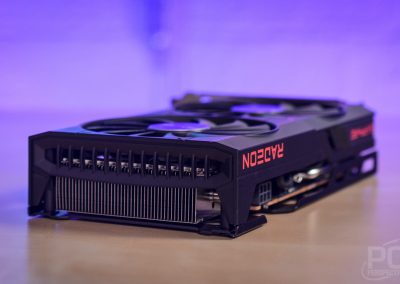 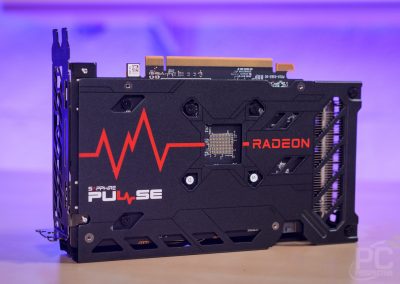 As to pricing, while retailers and the market itself with decide on an actual sale price, the MSRP from Sapphire is $199 for this card – consistent with AMD’s announced base price.

I couldn’t re-use any previous GPU test results for this review, since I hadn’t tested with 4GB-friendly settings with our current testbed configuration. The mix of cards in the charts to follow includes older stuff, with NVIDIA’s GeForce GTX 1050 Ti and GTX 1060, and AMD’s Radeon RX 570. I also re-tested the RX 5500 XT, with some interesting results.

I ran both the Fire Strike and Time Spy benchmarks, with the results on the charts below averaged from three runs per card. 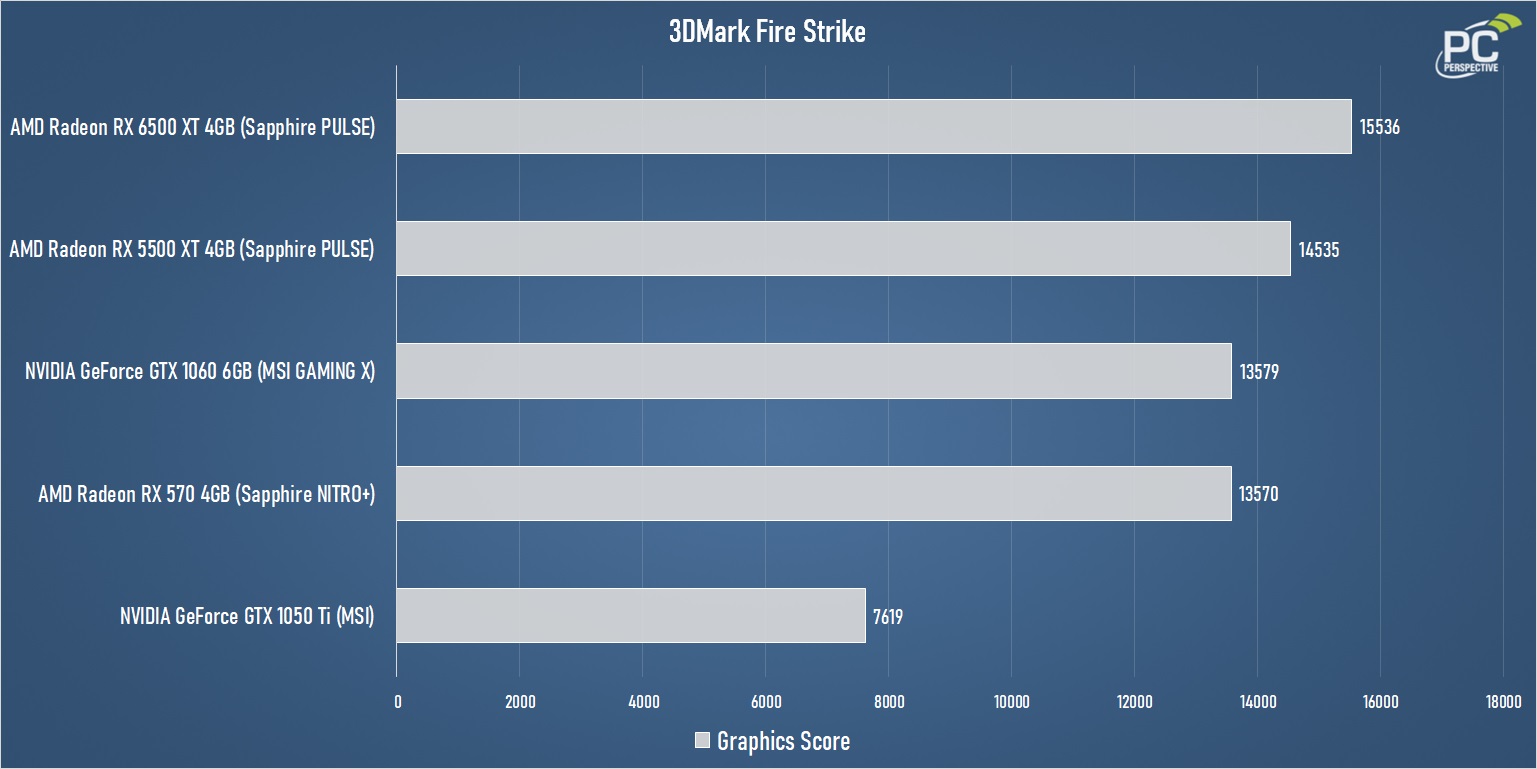 The RX 6500 XT is quite a bit faster than the RX 5500 XT in the less demanding Fire Strike test, but things are very close in the Time Spy benchmark. Also, I’d forgotten just how much slower the GTX 1050 Ti is when compared to a GTX 1060. 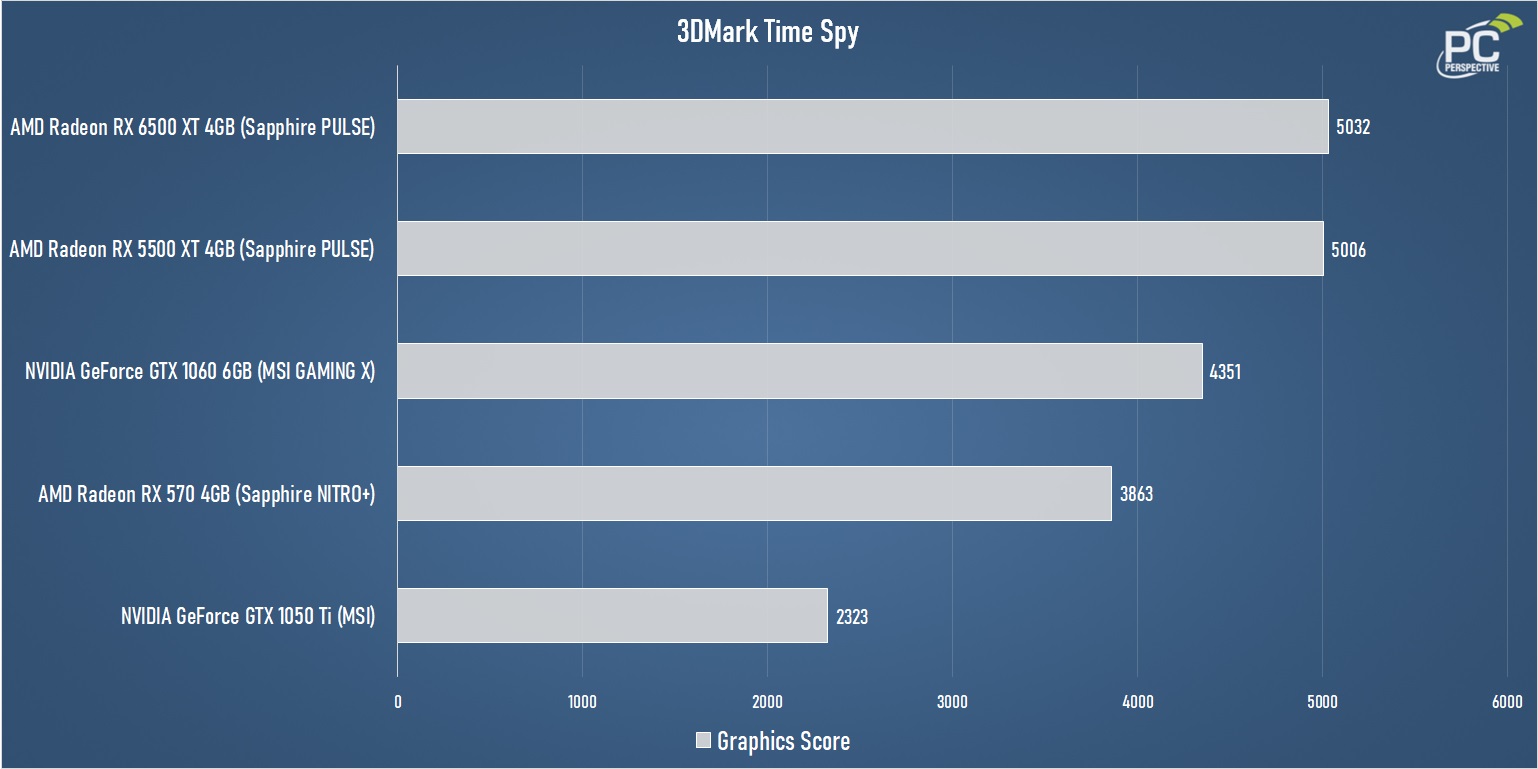 Metro Exodus results, as with the other games here, are averaged from three identical runs per card. The game was run using the “normal” preset, which is the equivalent of medium settings. 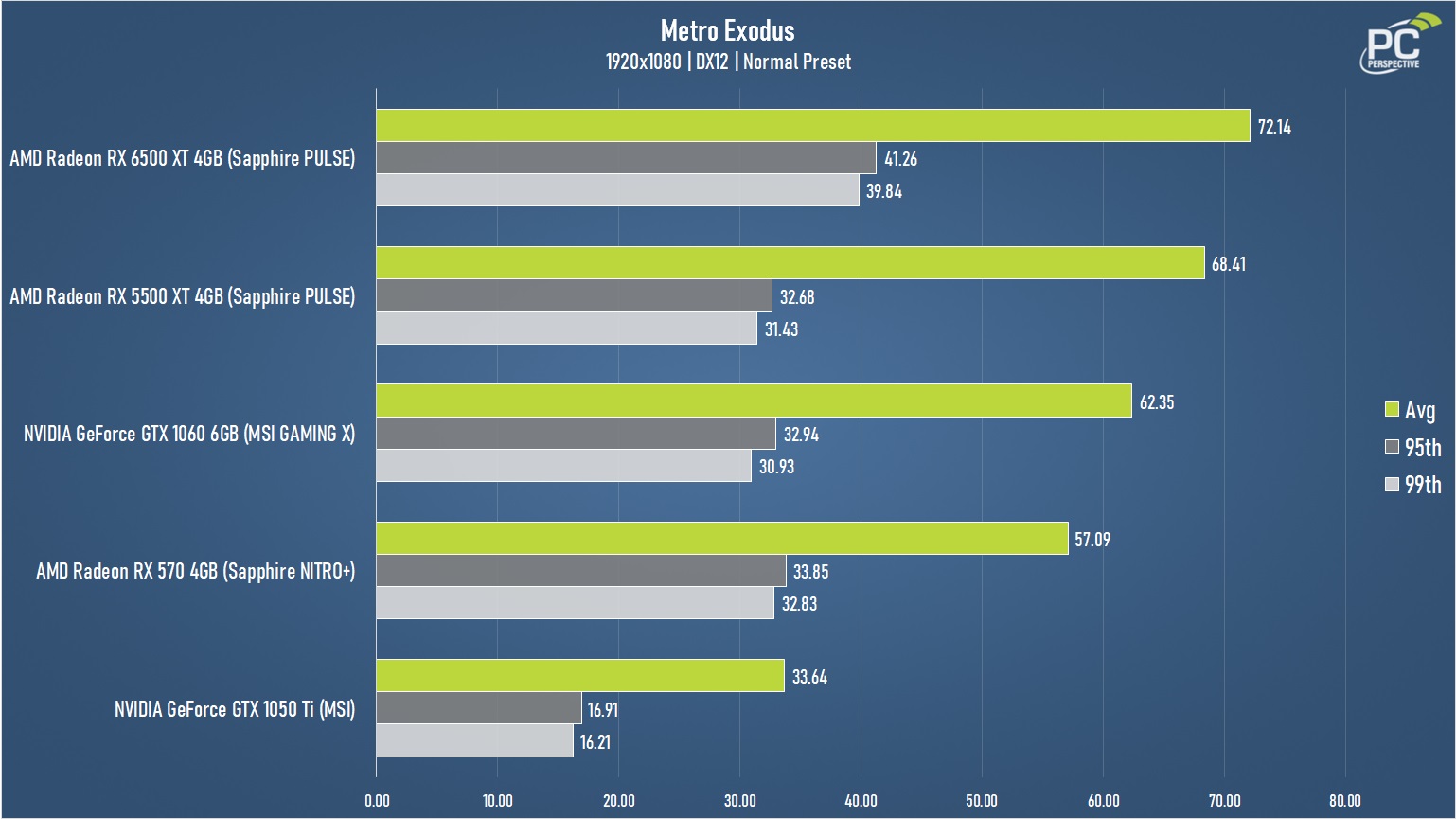 After those reassuring Metro Exodus results, what might be the result with another fairly recent DX12 title? We are living in the 1080/medium zone with this one as well: 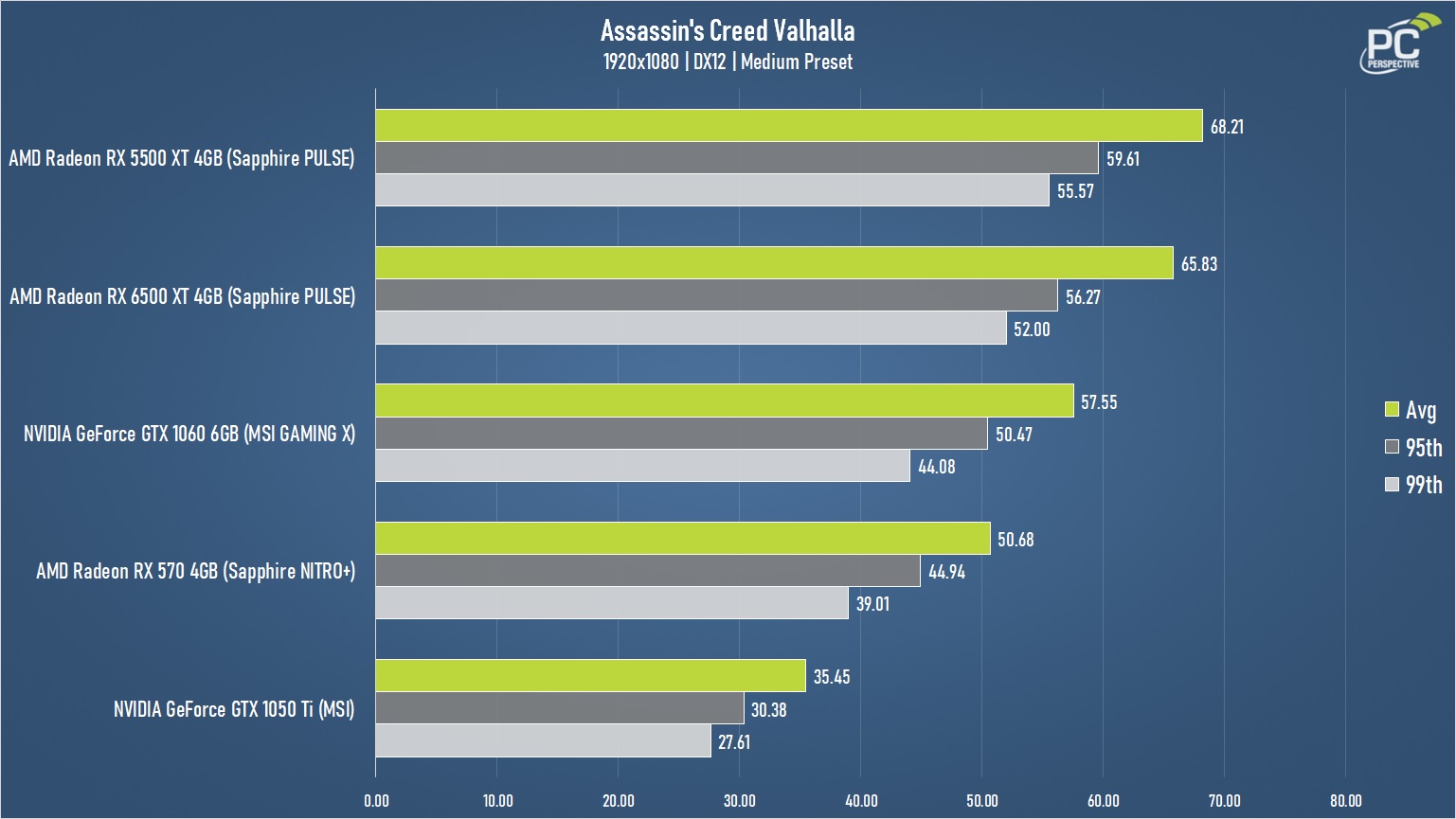 Well, the RX 5500 XT earned a slim victory over the new card here, with performance about 2.5 FPS faster on average at 1080/medium. We will see if the RX 5500 XT is on top with either of the remaining games.

Run using DX12 and at the “high” preset (previously I’ve tested this game at “ultra high” settings), all of these cards are capable of producing pretty high frame rates – well, almost all… 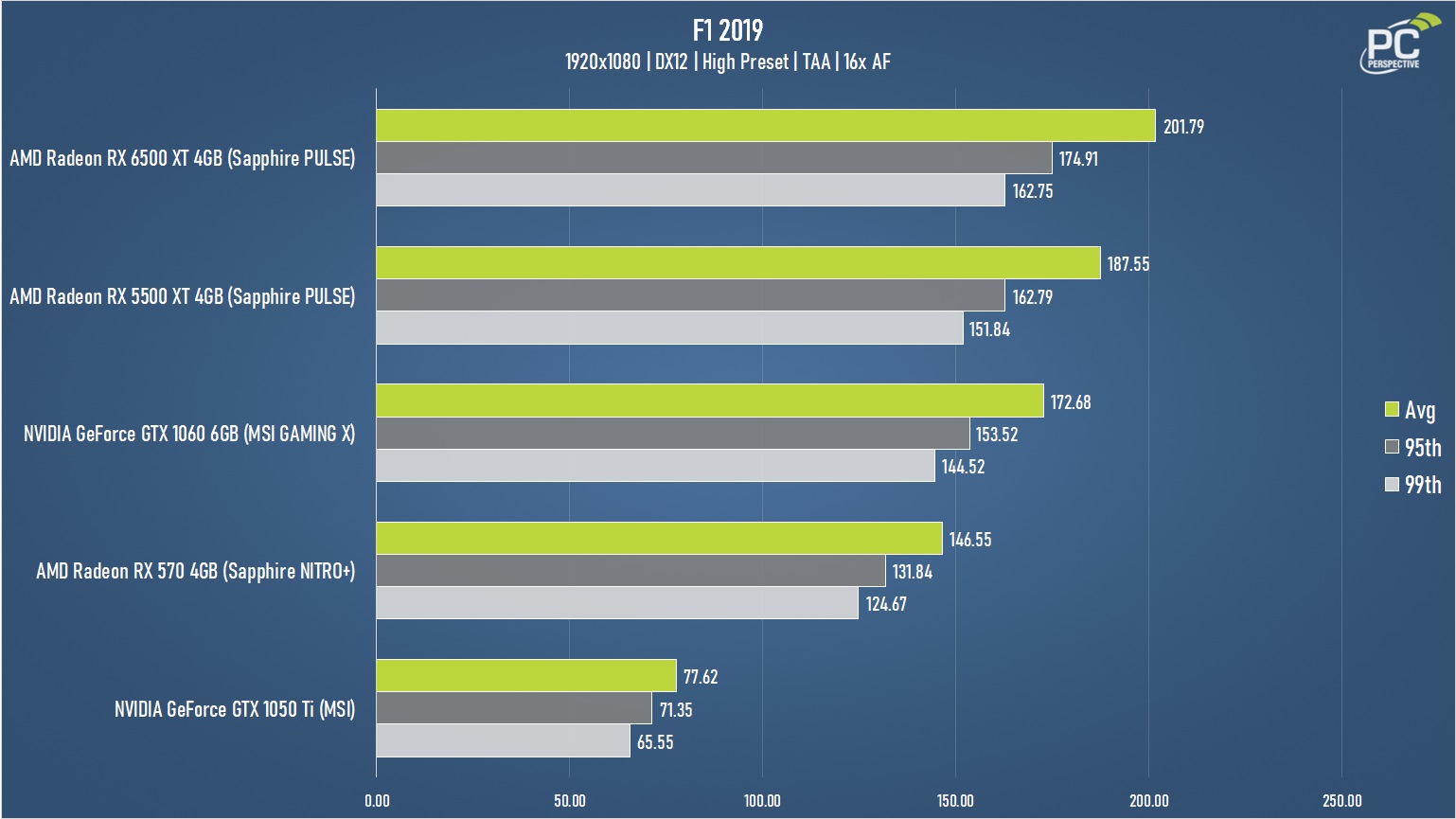 The RX 6500 XT is back on top in this test, averaging over 200 FPS in this less demanding test. At the bottom of the chart, with an average of just 77 FPS, the GTX 1050 Ti shows that it is simply part of a lower tier of GPUs.

Time for a DX11 title – and given the age of Far Cry 5 I felt safe running at “high” settings, though I left the HD textures disabled since we are reviewing a 4GB card here. 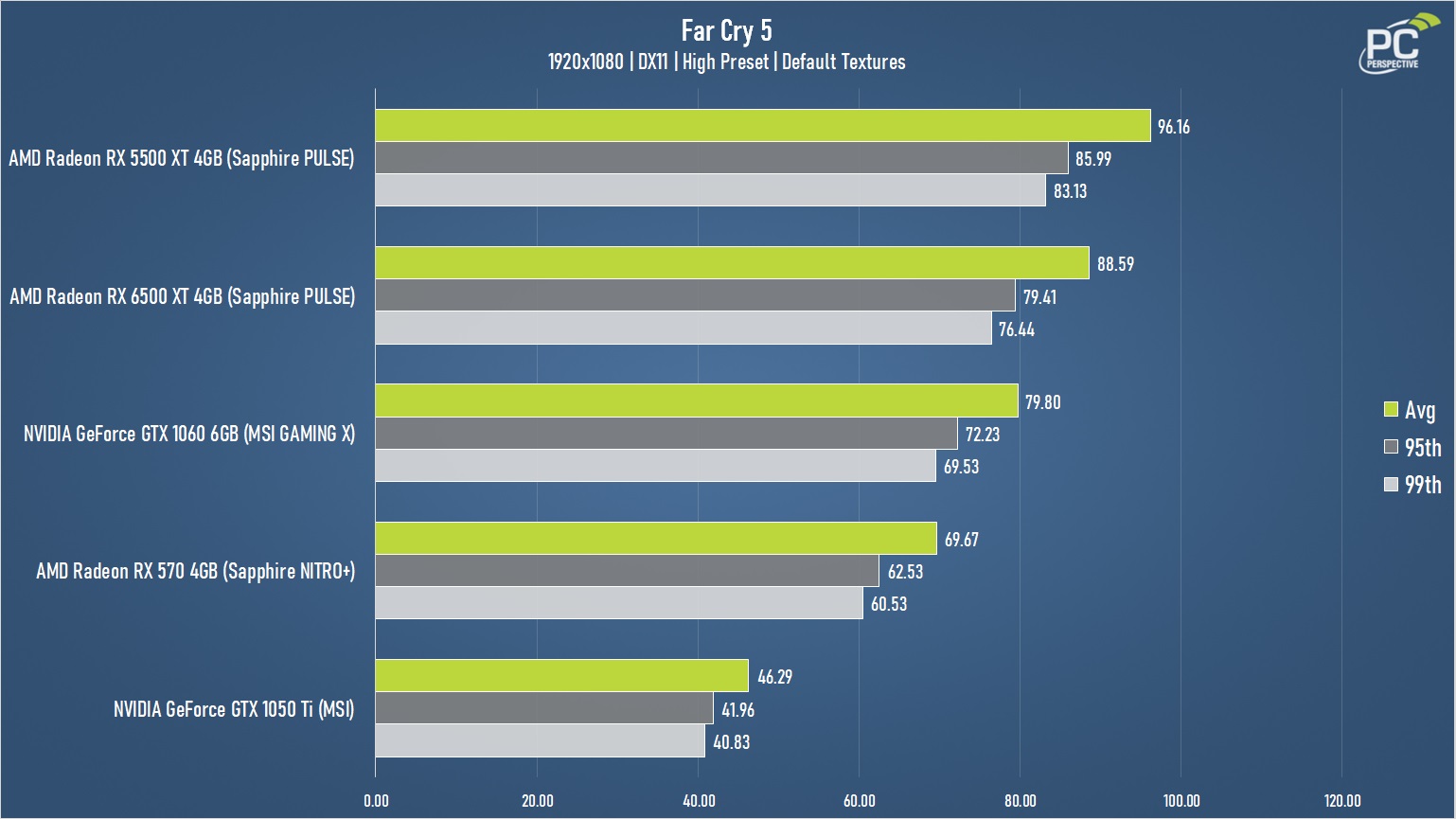 So there you have it: a new $199 GPU in 2022 that trades blows with a $169 GPU from late 2019. It’s depressing to me, of no interest to enthusiasts (other than to mock its existence), and very much indicative of what has become of the GPU market. Wait – I was trying to be positive with this review!

Measuring total system power at the wall, we will see if this new 6nm 6500 XT GPU has the efficiency advantage over the 7nm 5500 XT. The numbers on the chart include the power needed for the testbed’s Ryzen 7 5800X CPU, 32GB of DDR-3600 memory, two SSDs, and a 280 mm AiO cooler running at full speed. 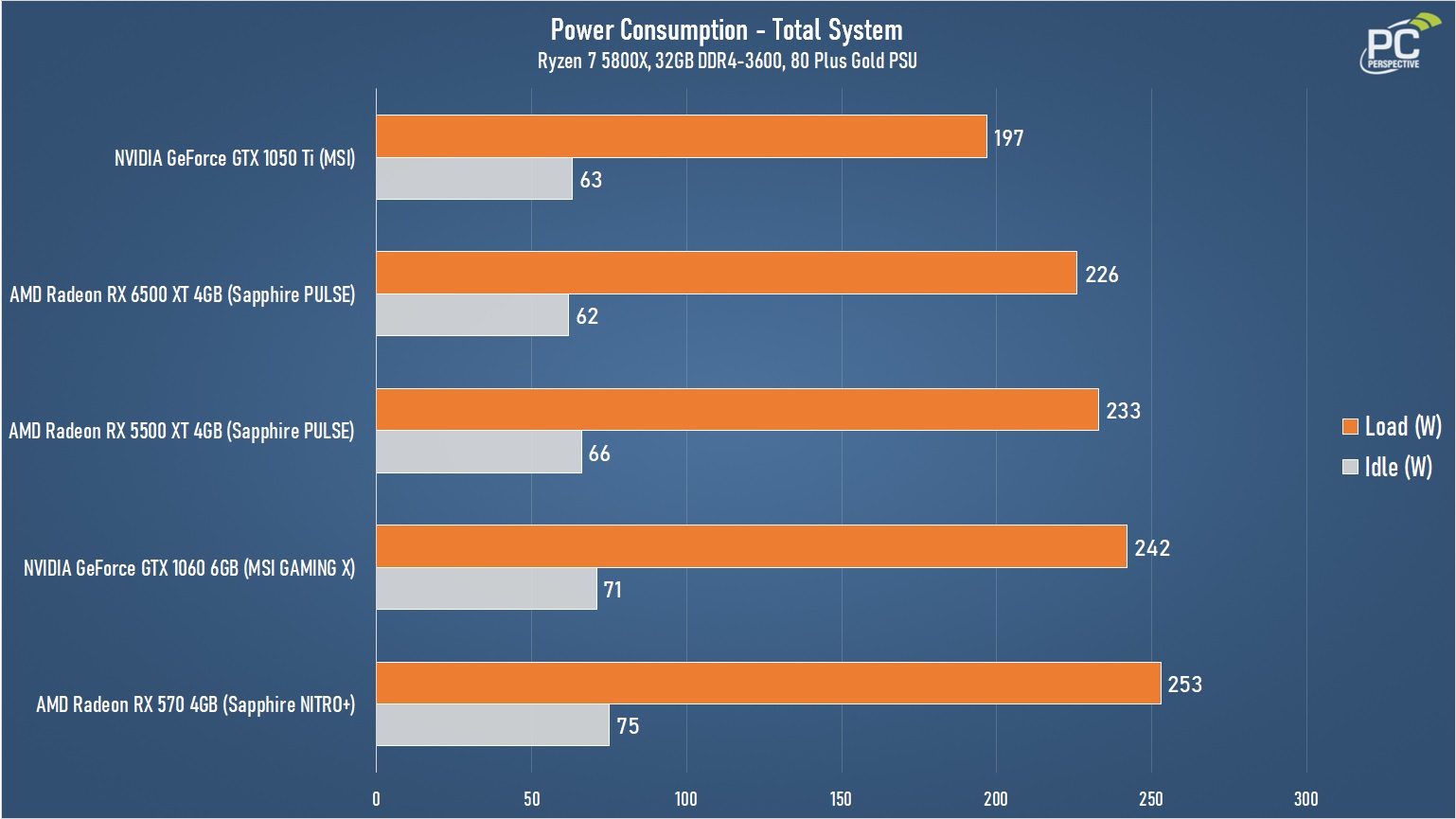 No, the Radeon RX 6500 XT is not the savior of the enthusiast gaming space. It’s not even much of an “enthusiast” card, period. AMD knows that this isn’t a spectacular performer, but they got more out of a 64-bit memory interface than I would have ever thought possible.

Context matters with this launch, and if you think of this as an ESports card you can actually buy, the numbers are pretty good. Looking at AMD’s internal testing for games like CS:GO, Fortnite, Overwatch, etc. (most with 100 – 300 FPS averages) paints a favorable picture of a card that is, in spite of the 4GB memory limit, just fine for competitive gaming at 1080p.

Looking at the benchmark results above it becomes clear that, yes, this card is perfectly capable of playing modern games at 1080/medium or 1080/high settings, and at smooth frame rates. No, you won’t be playing anything recent at “ultra” settings unless you like “cinematic” frame rates, but it’s important to distinguish the capabilities of a low-end offering with just 4GB of VRAM.

Scaling technologies are also perfect for a product like this, enabling higher performance (and lower memory usage). AMD’s FidelityFX Super Resolution and Radeon Super Resolution, as well as Sapphire’s own TriXX Software, allow you to render the game at a lower resolution, and then upscale it to your monitor’s native resolution. 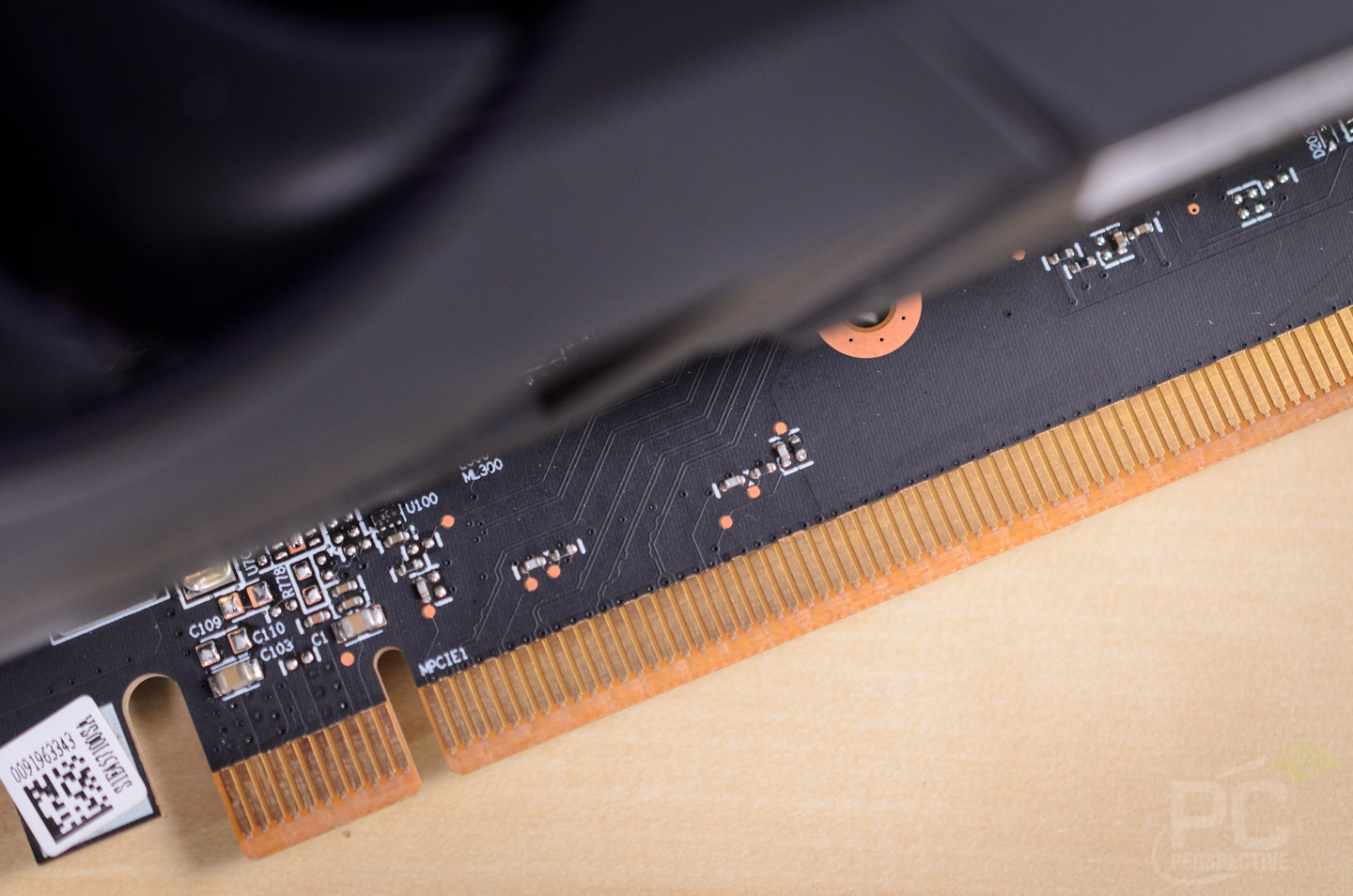 The PCI-E 4.0 x4 connection of this graphics card has been another sticking point with enthusiasts, and while I started my own Gen4 vs. Gen3 testing I eventually gave that up when I cleverly noted, “you wouldn’t test a Gen4 SSD on Gen3 and then complain about the speed”, so I just tested this Gen4 product as a Gen4 product.

In a non-shortage era a card like this would probably have been a slightly higher-end budget offering in the $100-$150 region of the market. I don’t think it would have launched at the same $169 as the RX 5500 XT more than two years ago. Let’s just pretend it’s $149. Does that make you feel better?

As to the Sapphire PULSE sample we borrowed for this review, it’s exactly what you’d expect from Sapphire. The card has a quality feel, the dual-fan cooling solution is more than up to the task of keeping this 107 mm^2 GPU cool and quiet under load, and the 6-pin power requirement makes this a viable option for even the lamest pre-built systems.

Pricing and availability dominate the conversation with any GPU launch at present, and the RX 6500 XT is actually in stock on Newegg as of this writing, with prices starting at $269 for those examples. This $199 Sapphire PULSE is out of stock, however. 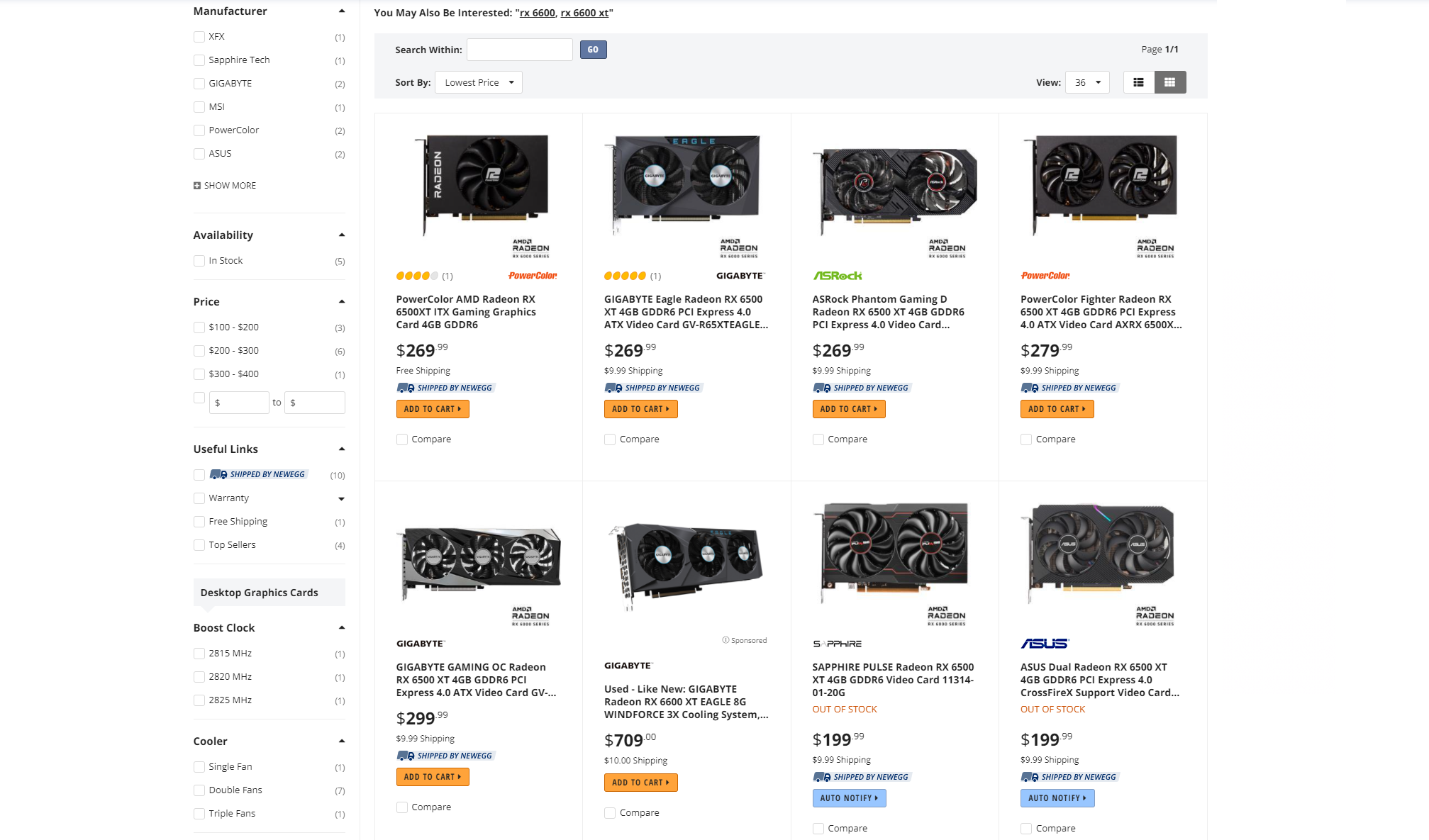 The product was on loan from Sapphire for the purpose of this review.

The product is being returned.

Sapphire had no control over the content of the review and was not consulted prior to publication.

Neither PC Perspective nor any of its staff were paid or compensated in any way by Sapphire for this review.

Sapphire has not purchased advertising at PC Perspective during the past twelve months.