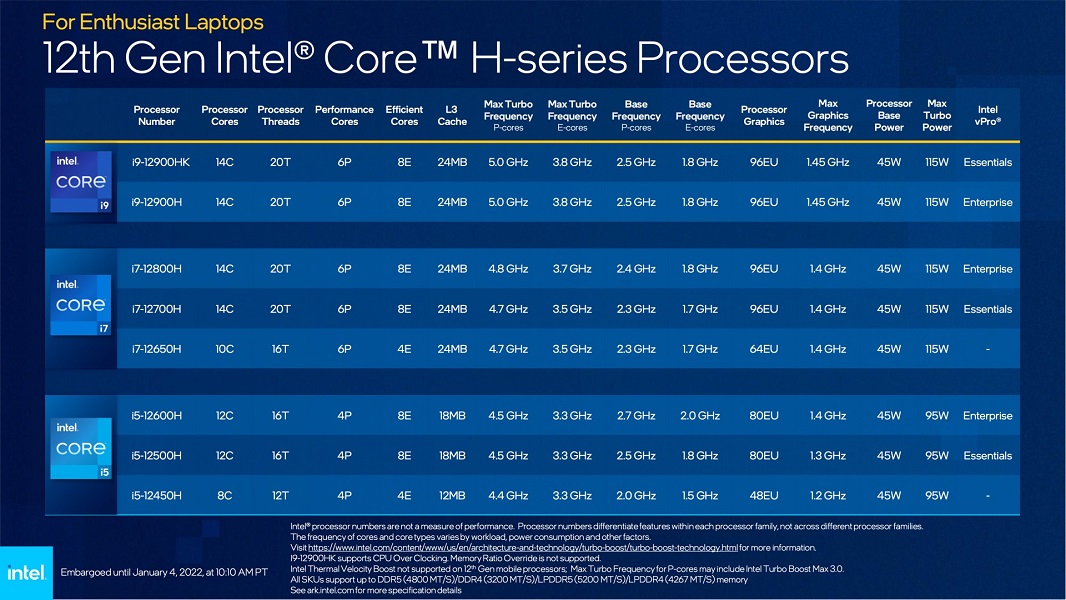 E-Cores All The Way Down The SKUs

Ars Technica got their hands on a mobile Alder Lake processor, contained in the MSI GE76 Raider.  Specifically it is the i9-12900HK with six P-Cores at 2.5/5.0GHz and eight E-Cores at 1.8/3.8GHx for a total of 20 threads, along with an Intel Iris Xe Graphics G7 96EU  GPU running at 1.4GHz.  The processor is set to run at 115W when in Turbo mode, though Ars also tested it at 135W thanks to software from MSI and Intel, unfortunately the BIOS lacks many of the options required to adjust power and frequencies.

They chose to test it against a relatively close match from the previous generation, an eight core, 16 thread i9-11950H in a HP ZBook Studio G8.  The match is not perfect, then again as laptops have different thermal solutions it is rather hard to compare apples to apples when testing mobile parts.  Speaking of Apple, the M1 Max powered MacBook Pro also makes an appearance in their benchmarks as well.

The generational change is noticeable on tests which make the most of multithreading as it seems that even though an E-Core is less powerful than a P-Core individually, if you throw enough E-Cores at at task they do offer benefits over a smaller number of P-Cores.   The difference between running at 135W versus 115W was rather small, since Alder Lake will run at it’s sustained Turbo frequency so the few times you have a single core running at peak Turbo which benefits from the extra juice are few and far between.

Keep an eye out for more mobile Alder Lake tests from Ars, some of which will include AMD’s upcoming Ryzen 6000 chips, once they are available.