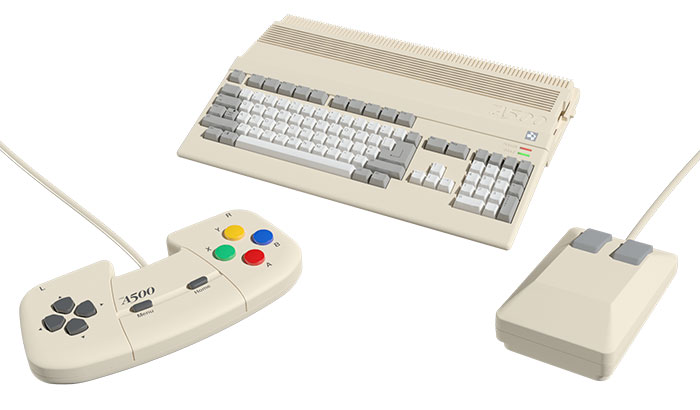 Announced Barely A Year Ago And Already Starting To Arrive

Unlike several other retro consoles which were announced some time ago, the first retro Amiga A500 Mini has been delivered to a YouTuber channel called Retro Recipes.  They have since tried out a few games, as well as stripping it down to get a look at the naughty bits inside.   They had good taste in the included games they tried out, of the 25 they tested Worms, Speedball 2 and Battle Chess.   The video preview of the A500 Mini can be watched here.

Other attempts at rebooting old hardware did not go so well.  The Sinclair ZX Spectrum Vega Plus could have had it’s own soap opera, with the development team splitting up, missed delivery dates, a suspension by Indiegogo, a shareholder revolt, revocation of the license to use the Sinclair ZX Spectrum name and to top it all off, a barely working product when it finally started shipping to those backers that did not sue for refunds.

The Atari VCS did somewhat better, with their original Q2 2019 launch delayed to December of 2020 for many, early 2021 worldwide, however there were troubles on the design team there as well … and yes, Star Citizen still claims it is going to be a thing someday.

In this exclusive preview let’s boot up (& tear down) TheA500 Mini retro console prototype, see what it can do, if it's good or bad, & how this tiny incarnation of the Commodore Amiga 500 works!