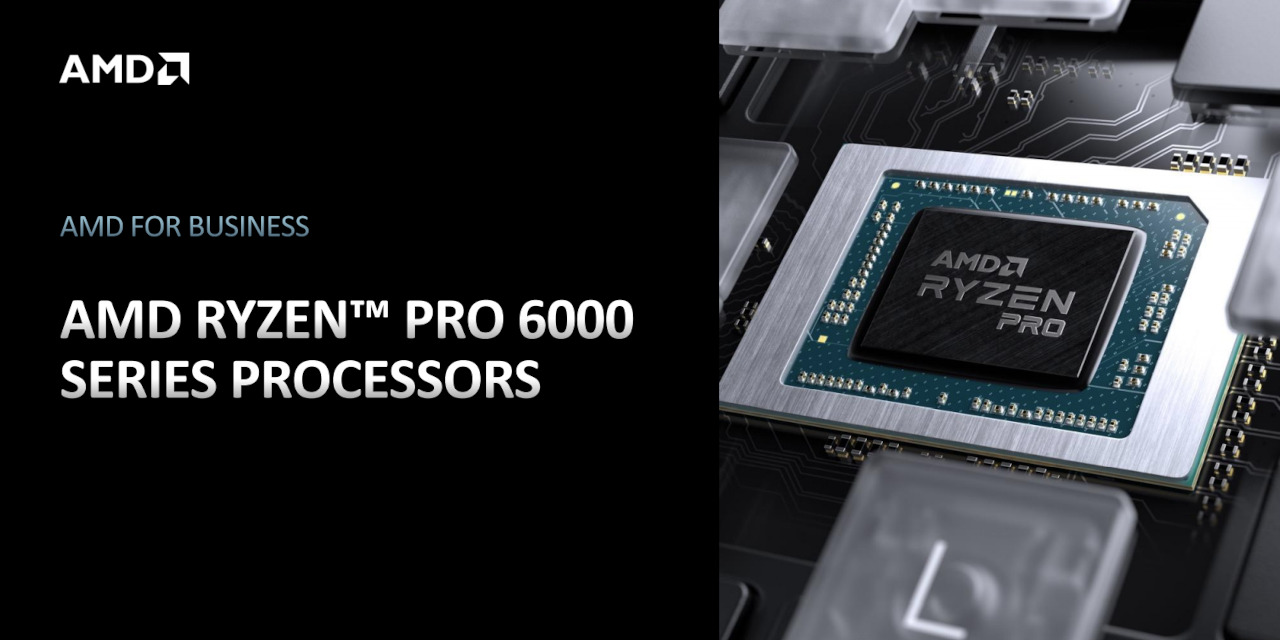 Zen 3 Plus and RDNA 2 for Professionals

AMD now has a full lineup of Ryzen PRO 6000 Series processors to compliment their consumer laptop offerings, and these feature the same Zen 3+ processor architecture and RDNA2 graphics that AMD first outlined during the Ryzen 6000 Series launch at CES 2022.

AMD is emphasizing performance, security, and (especially) battery life with these new parts, which feature the same 6 nm process introduced with the consumer 6000 Series parts. Clearly proud of these new chips, AMD boasts that these “AMD Ryzen PRO 6000 Series Processors are the world’s most advanced processors for laptop PCs” on their updated Ryzen PRO processor lineup page. 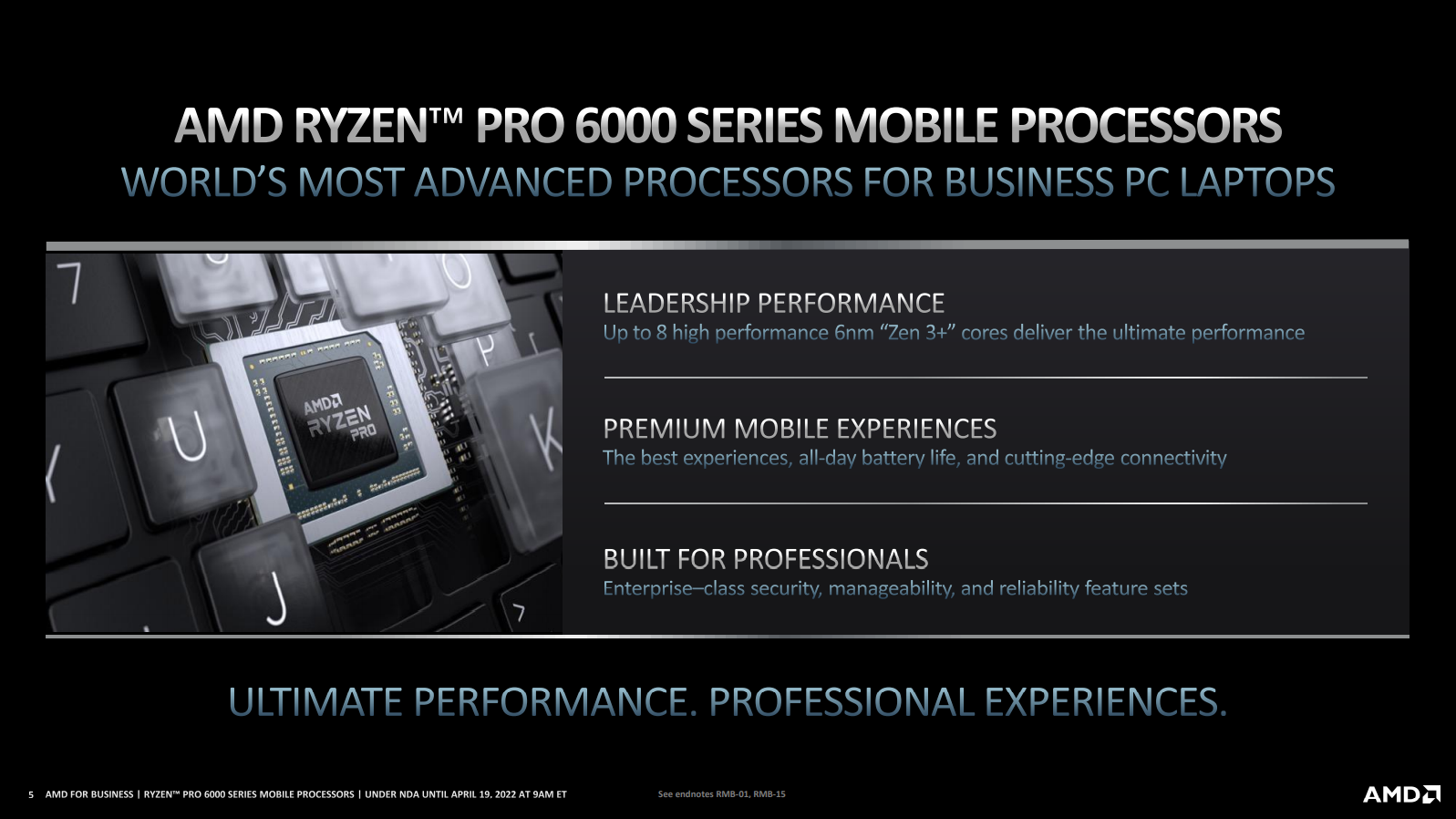 “Video conference meetings throughout the day are now the norm and laptop performance that more than meets the challenges of using remote collaboration tools and productivity apps simultaneously has become table stakes. Based on the world’s first 6nm process technology for business notebooks, AMD Ryzen PRO 6000 Series mobile processors deliver the leadership performance and uncompromising battery life needed to meet the demands of remote collaboration and productivity.”

Part of the Ryzen PRO product offering is an integration of exclusive security features, and some of the technology is summarized on this slide: 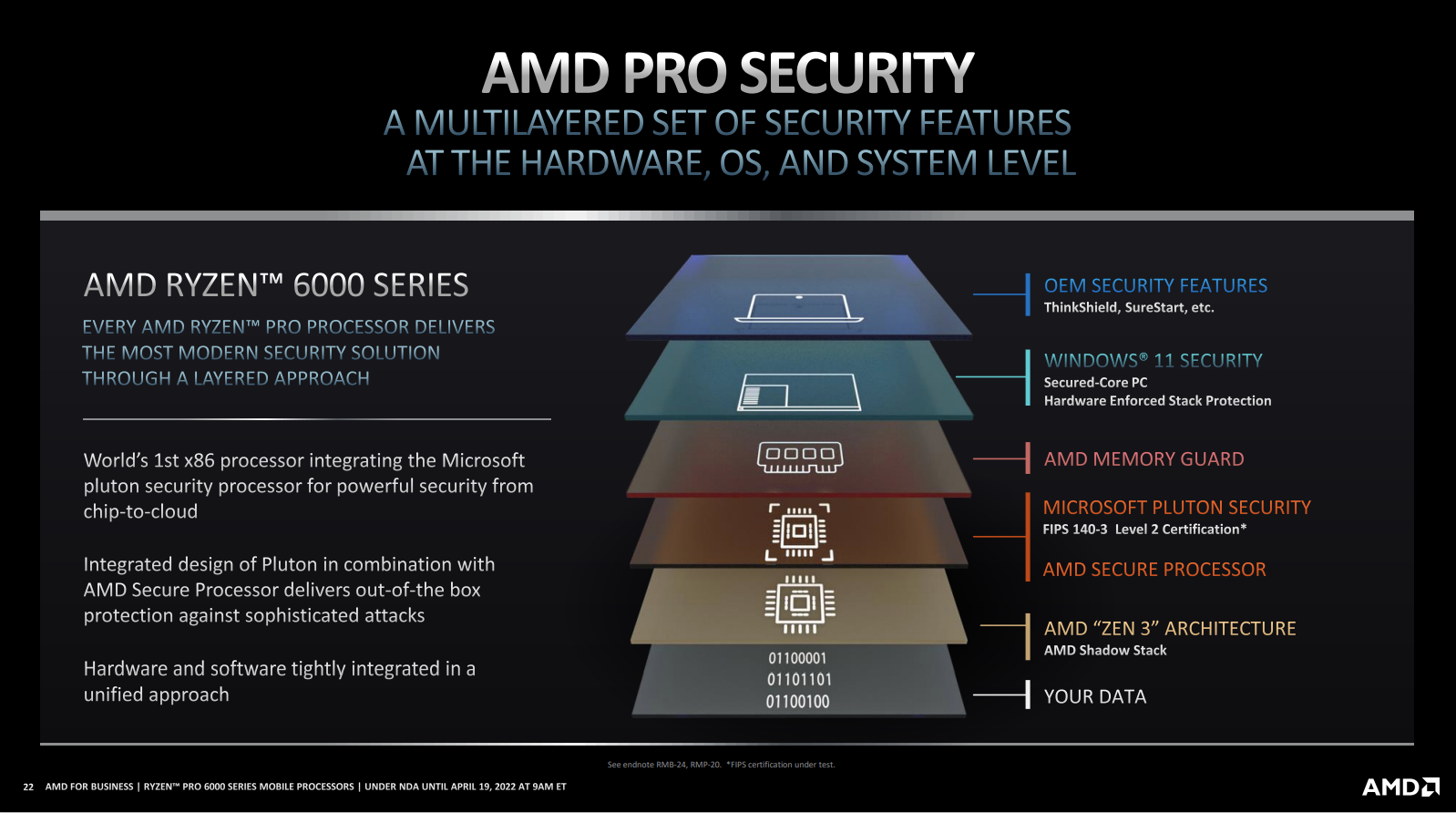 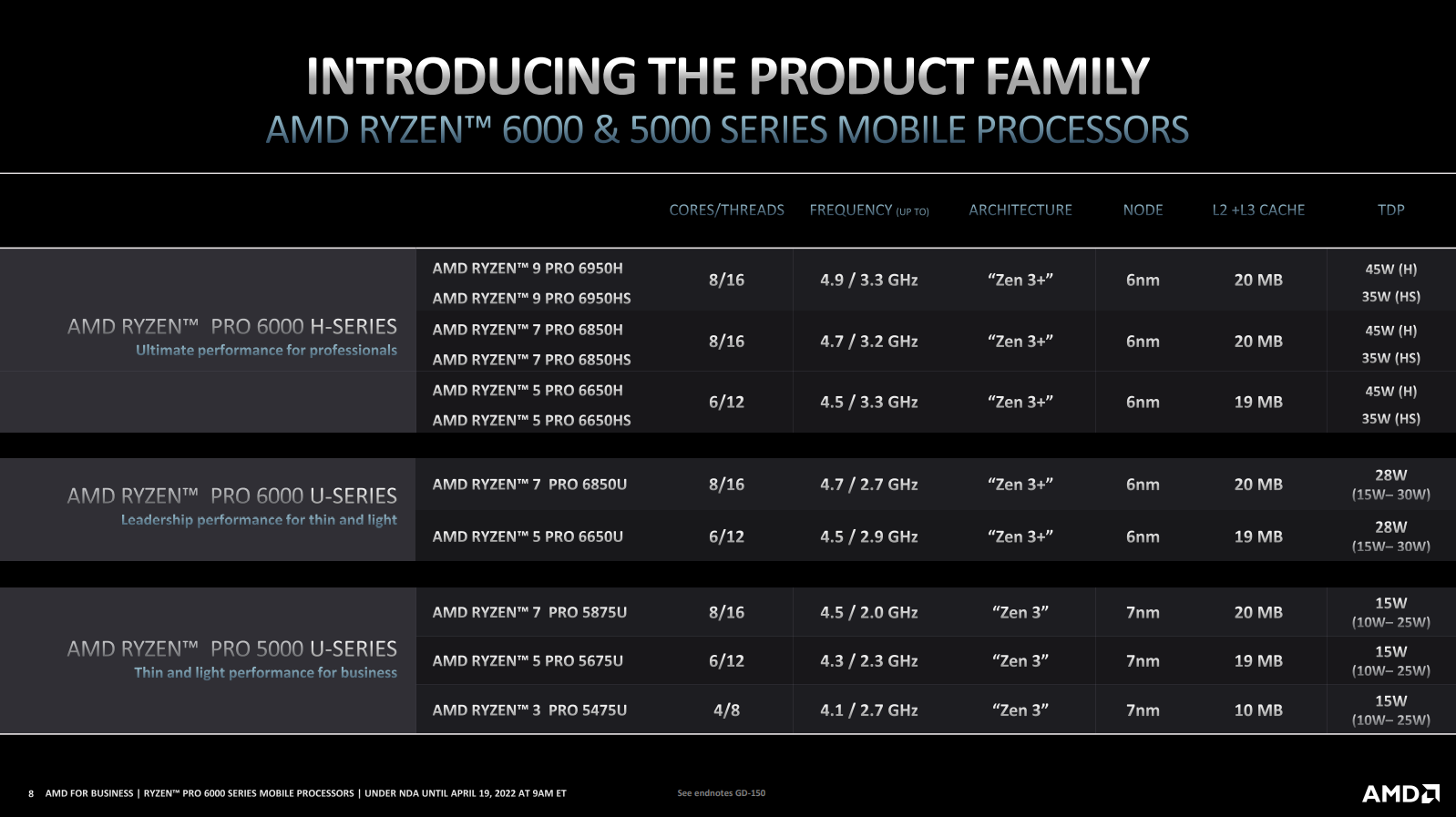 Not shown on the above product family slide is an interesting – and somewhat mysterious – part called the Ryzen 7 PRO 6860Z. I haven’t seen any information about clock speeds or TDP, and don’t even see a core count – though it seems safe to assume it will be 8c/16t like the rest of the high performance options in the lineup.

This Ryzen 7 PRO 6860Z is exclusive to a specific laptop from Lenovo, the result of “deep co-design for the ultimate collaboration laptop”, according to the slide: 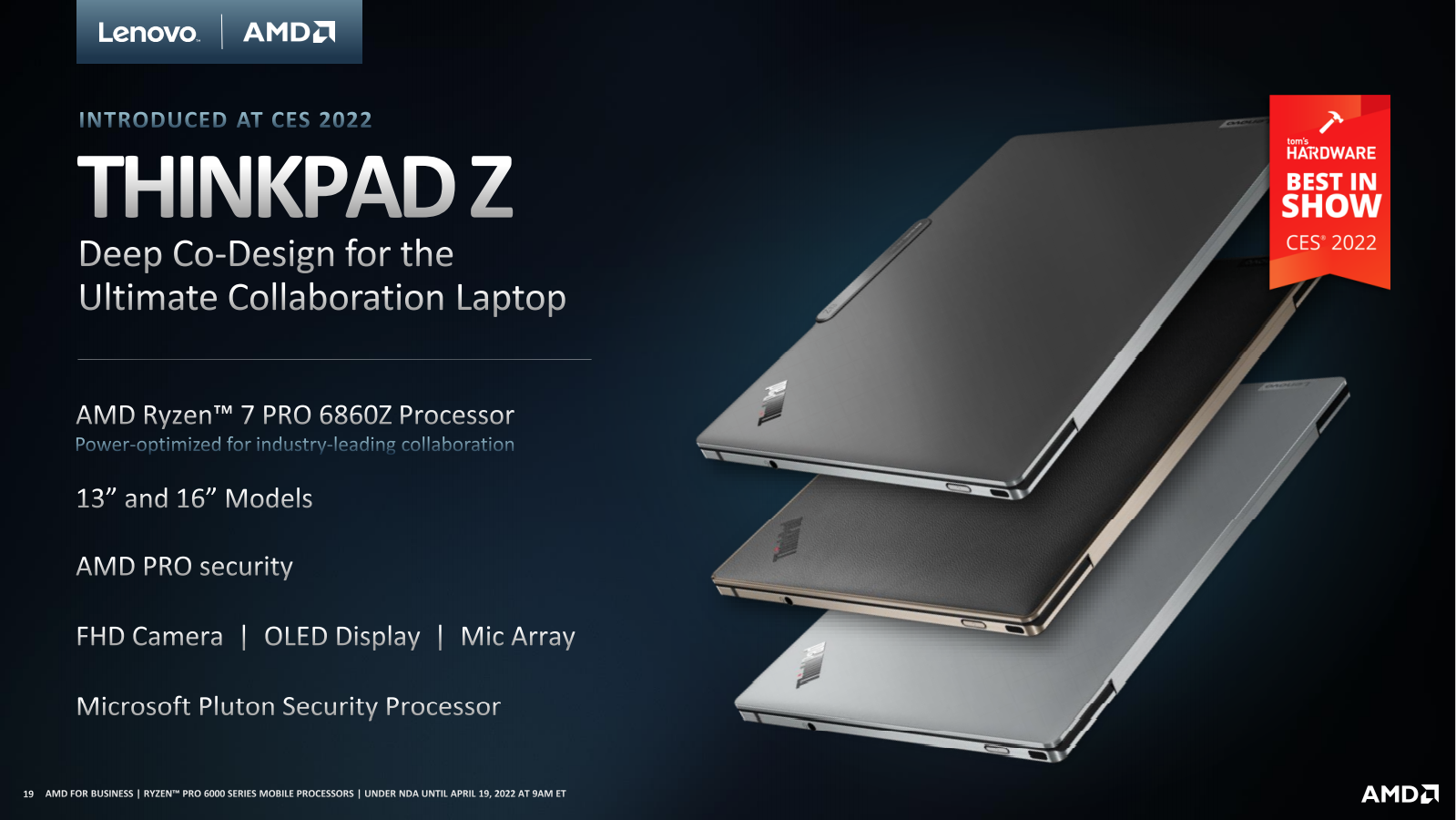 While we don’t know exactly what specifications can be assigned to this new CPU, we will hear about some of the performance claims for this part in the next section.

AMD has published a blog post regarding performance of at least one of their new Ryzen PRO 6000 Series processors – the above-mentioned Ryzen 7 PRO 6860Z processor – which they claim provides a significant advantage over competitive products from Intel. The full blog post can be found here, and some performance slides from AMD’s deck can be found in the gallery below: 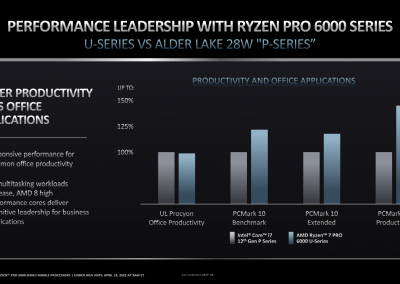 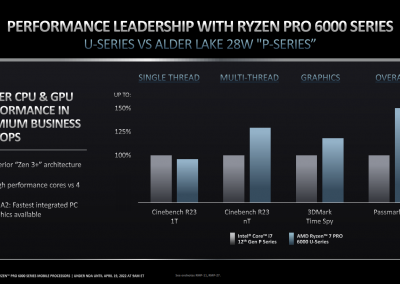 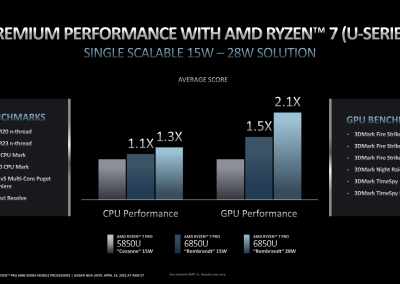 “Today, new data from AMD shows that the Ryzen 6000 PRO Series processors – with 8 high performance 6nm ‘Zen 3+’ cores and enhanced AMD RDNA 2 graphics – demonstrate up to 17% faster performance than the competition[i] when using MS Office apps such as PowerPoint, Excel and Outlook while simultaneously running Microsoft Teams conferencing. Even better still, laptops run on our latest processors experience up to 45% longer battery life for Microsoft Teams conferencing compared to the competition[ii].”

There is more to the blog post, but this paragraph has the relevant performance and efficiency claims, and there are a couple of footnotes referenced. While not particularly interesting much of the time, the footnotes in this case are significantly longer than the above text, and while the first simply indicates the configuration of the tested systems and lists the benchmark that was used, the second is more interesting. We will tediously explore these now.

Here is the first footnote, regarding the “17% faster performance than the competition” claim:

Notice that there is no information regarding the core count, clock speeds, or TDP configuration of this special Ryzen 7 PRO 6860Z, which is exclusive the ThinkPad Z13. Intel’s Core i7 1260P (link to specifications), being a 12th Gen part, has a core count split between performance and efficiency cores, which in this case is a 4 P-core/8 E-core configuration. It has a base power of 28W and max turbo power of 64W.

For those interested, more information on the Procyon benchmark AMD used is available from UL (the makers of PCMark and 3DMark) at this link. 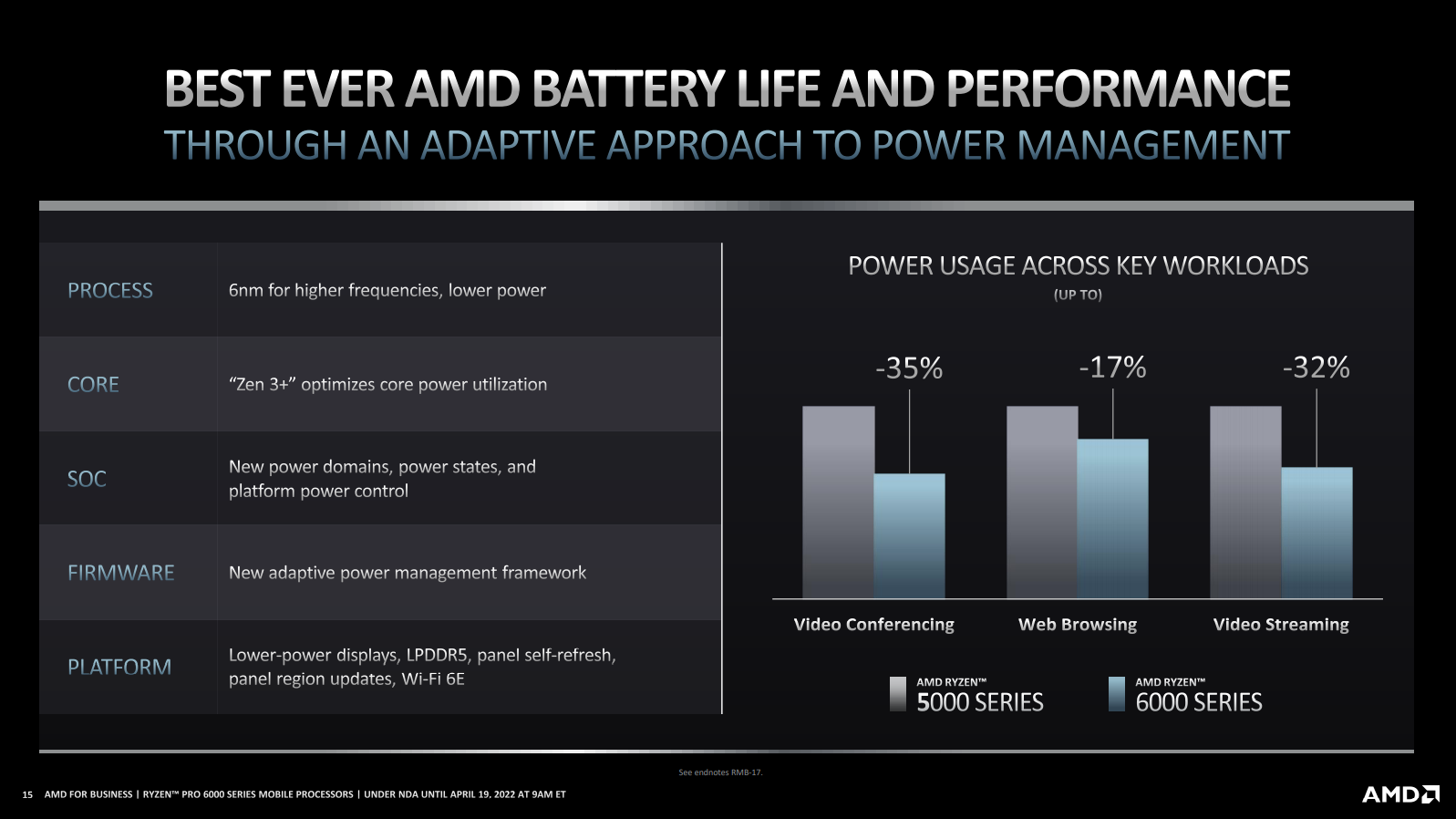 And now we will look at the second footnote, regarding the “up to 45% longer battery life” claim:

Of note when comparing these results is the line “battery life results normalized for battery capacity differences”, as the specific models of laptops being compared have different battery capacities. In other words, the Intel laptop , which has a slightly larger battery, was not allowed to use its full installed battery capacity in the rundown test. As noted, the Intel-powered ThinkPad X1 Carbon has a 57 WHr battery, while the AMD-powered ThinkPad Z13 only has a 50 WHr battery.

It’s also worth noting that the Intel machine has a larger screen, 14 inches, which would presumably consume a bit more power than the 13.3-inch AMD laptop – but a bigger issue is that the display resolutions were not disclosed. I would hope that both systems were tested at the same resolution, regardless of the native resolution of the panel, but this is not clear.

I doubt any changes to the test setup would erase the massive 45% margin of victory for the AMD system, and the claim of 17% faster performance from the 8-core Ryzen 7 PRO 6860Z processor vs. the Intel Core i7 1260P and its 4 P-core / 8 E-core configuration probably comes down to parallelization in testing, given the performance core deficit from Intel here (I’m treating all of AMD’s core as “P-cores” here). Regardless of  the test methodology, which still seems a bit odd to me, the larger issue is that these vague disclosures leave something be desired.

The many colours of EEE