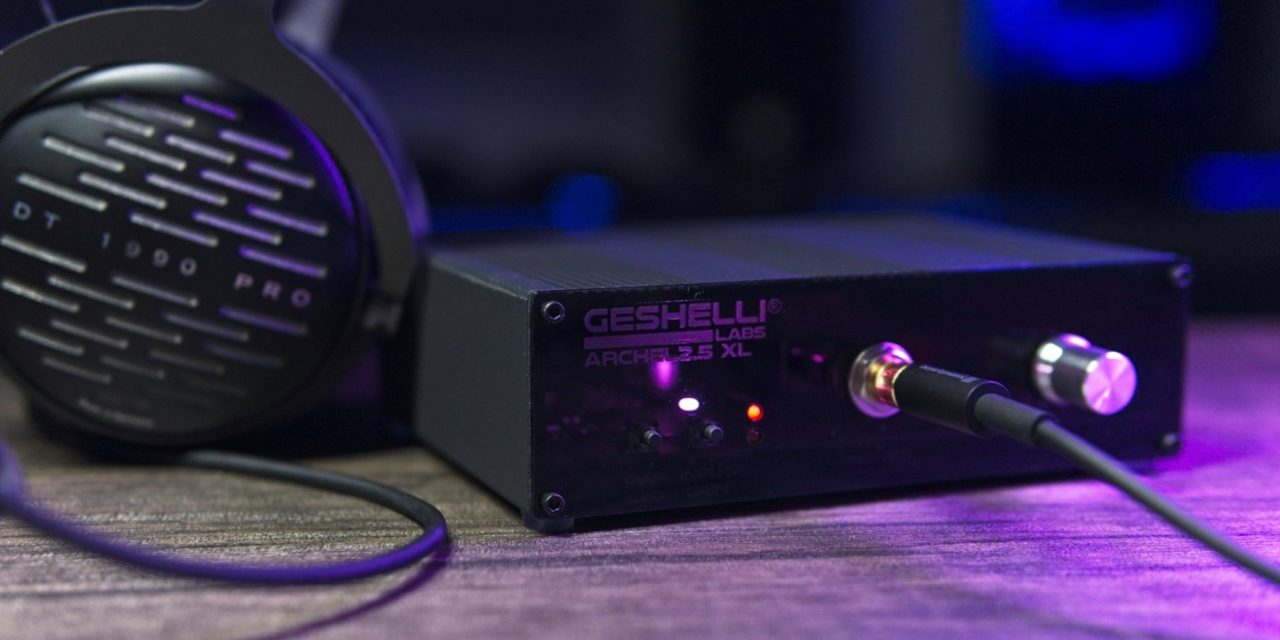 As many of our regular viewers and readers might be aware, I enjoy quality audio equipment.  I would not go so far as to call myself an audiophile.  I don’t particularly care for the snobbish connotations of that title, nor do I drive a $500 car to my trailer so I can enjoy $50,000 speakers powered by hand built monoblock amplifiers with vintage Russian tubes.

Personally, I am quite content as long as my music is reproduced cleanly and with good detail.  It was precisely Geshelli Labs’ reputation for clean and detailed power that put their new Archel 2.5 XL headphone amplifier on my desk. 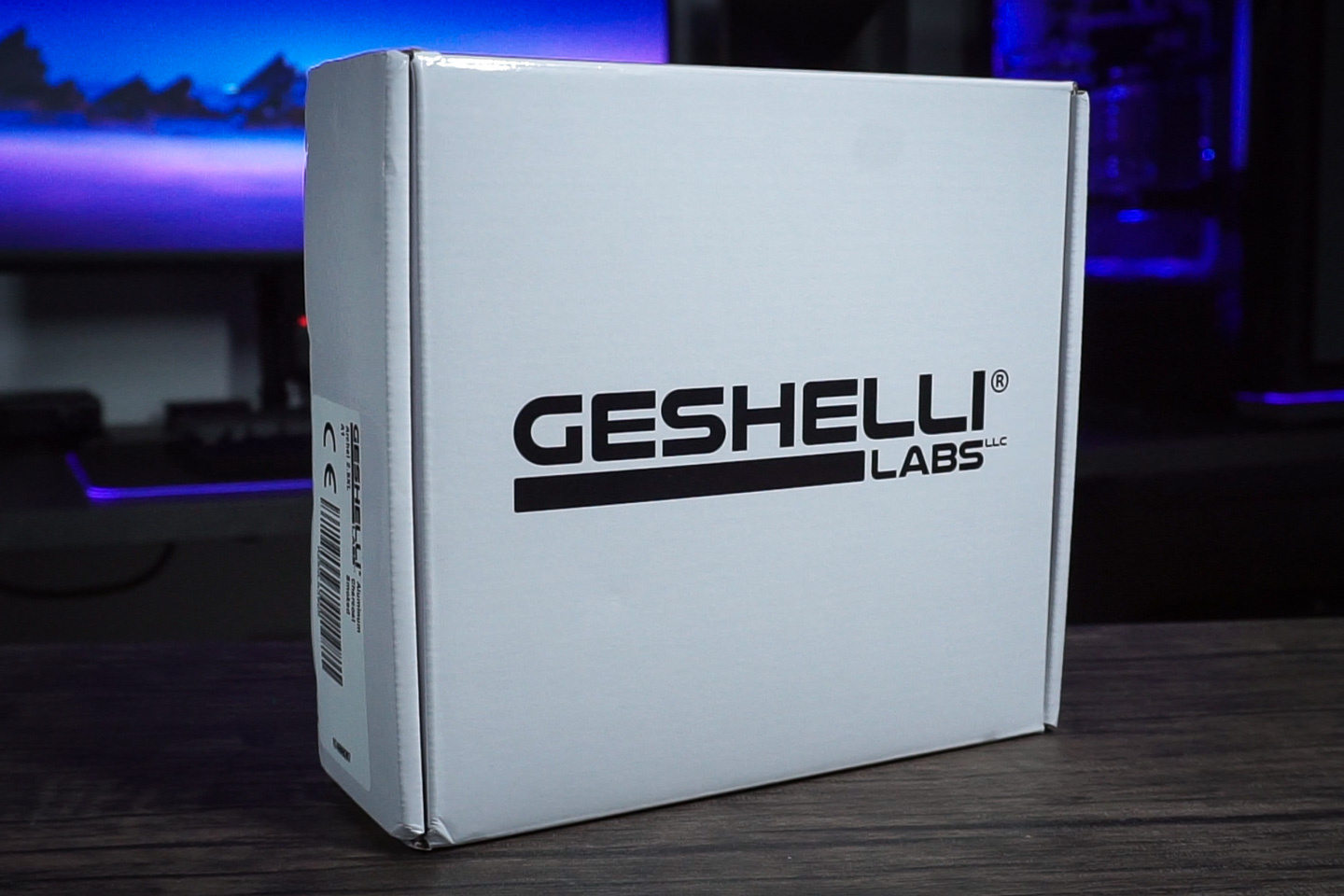 I would wager that many of our readers have never heard of Geshelli Labs until now, which is understandable as they are a relatively young and small, US based manufacturer of desktop DACs and headphone amplifiers.  If you want to know how young, they started building DACs for their own personal use in 2016.  If you want to know how small, my emailed questions to support were answered by the founders of Geshelli, Sherri and Geno.

While some might prefer to deal with support staff at a giant corporation with thousands of products, I found it really great to be answered by the engineers who designed and build the product.  On top of that, they don’t just answer the emails as these amplifiers are built, right down to the PCB, in Geshelli Labs’ Florida facility.

A few months ago, I began having problems with channel balance on the headphone amplifier I had been using for a couple of years  What I eventually discovered was the gain switch on the unit was failing.  As the amp was out of warranty, and the repair of the unit was beyond my own meager soldering skills, I ended up on a quest to find a higher quality replacement and ended up with five different amps sitting on my desk.

I A/B compared them back to back with my Beyerdynamic DT1990 Pro and DT880 Edition 600ohm headphones over a period of several days.  Eventually I settled on one particular model and I was extremely happy with it. I felt it had the best reproduction characteristics, and enough power to feed the power hungry 600ohm DT880s.  Two months later it died.  Luckily I was still within Amazon’s extended Christmas return window and was able to swap it for a replacement.

In six weeks, that one died as well, and I started reading comments from other owners of the same model having failures, and so my search began once more.  Enter the Archel 2.5 XL, which starts at only $210.

The Archel 2.5 XL (or X) model is an op amp based headphone amplifier.  It uses two Texas Instruments OPA1612 op amps to provide either unity gain (the same power output as the voltage coming from the DAC), or 6x current mode amplification in its high gain mode. 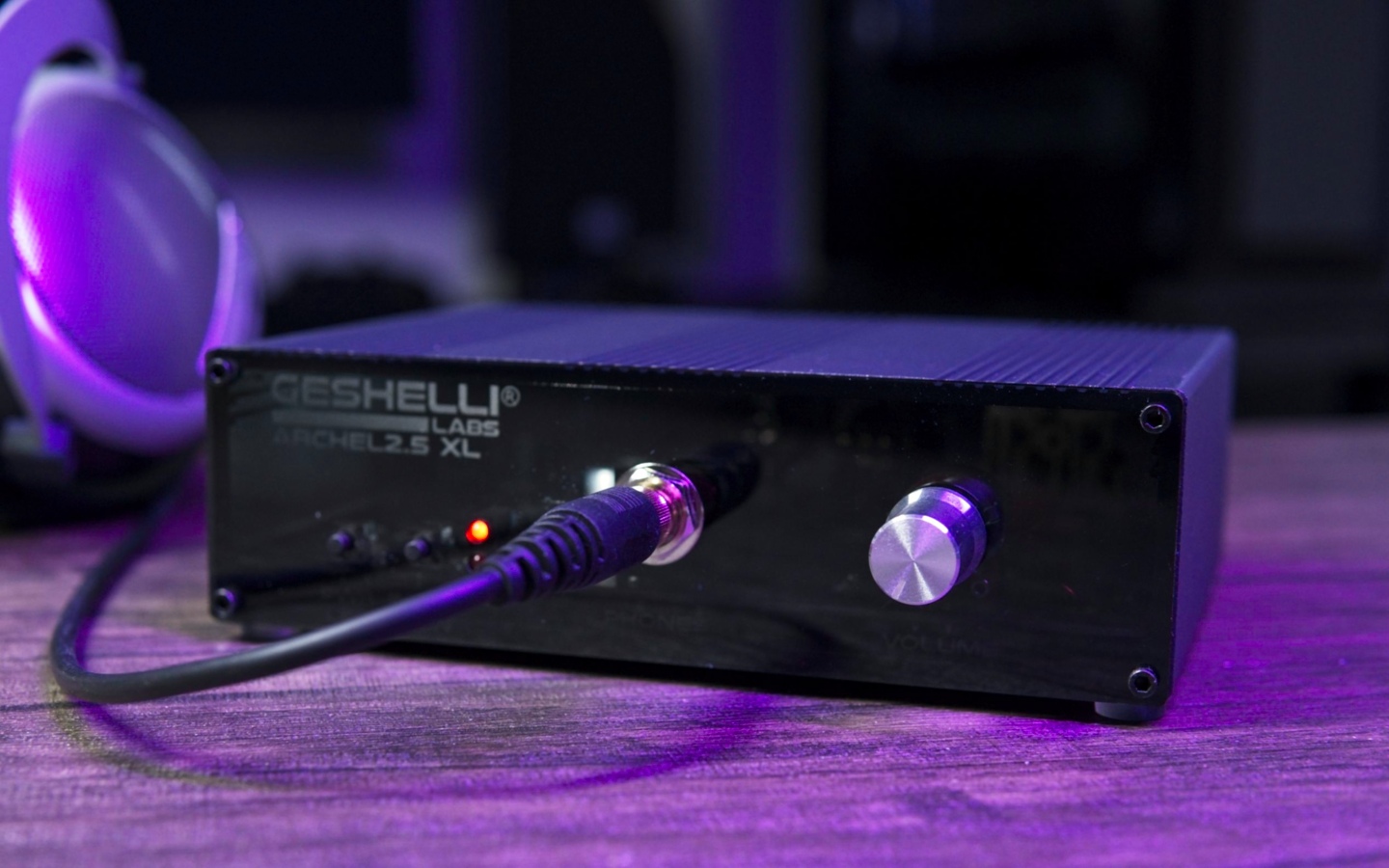 This allows you to stack the X or XL model with the ENOG or JNOG series DAC’s.

Geshelli Labs offers all their models in an assortment of powder coated colors for the chassis, and different tints (or clear) for the acrylic front and rear plates.  The model I purchased is their standard aluminum chassis with smoked acrylic front and rear. The XL model of the Archel, the Enog (their balanced out headphone amplifier) and their J2 DAC, are also available with a wooden chassis in several different finishes as well. 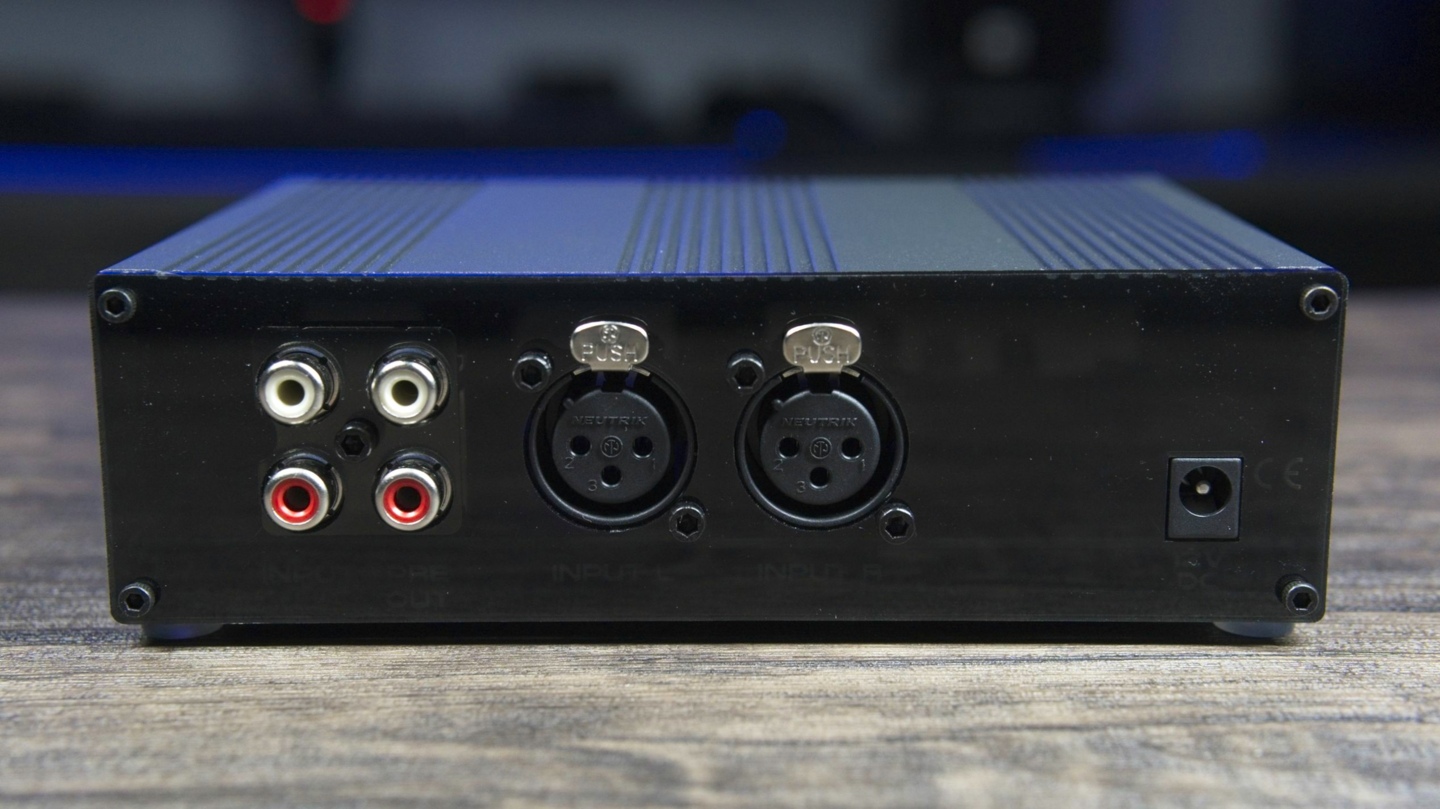 If everything else on my desk weren’t already black (including my DAC, speakers, speaker amp and so forth) I would have definitely gone with the wood case as it really adds a touch of class to the product.  The unit is also easily disassembled and you can order different cases and faceplates later on if you want to change the look later on. 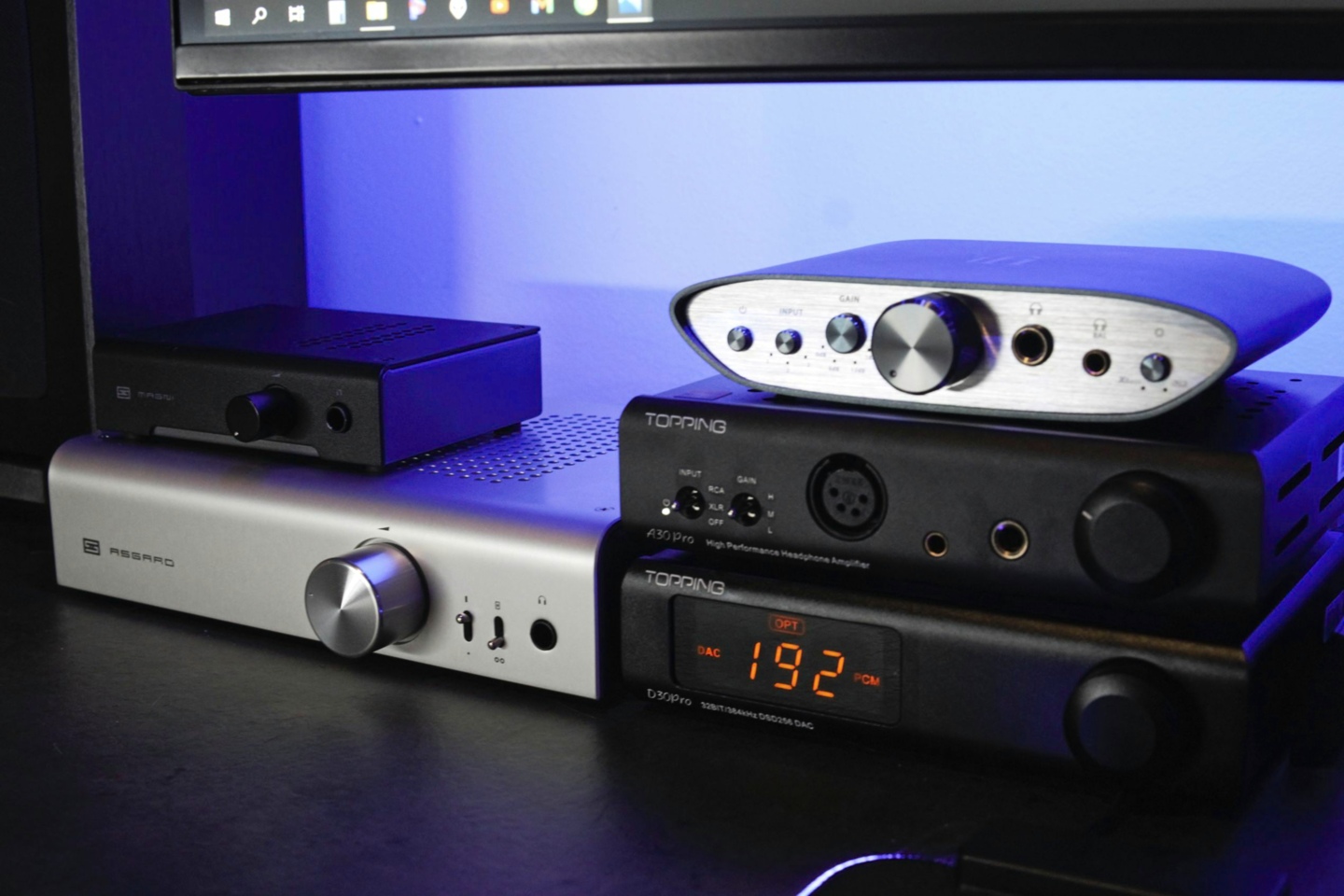 Any sane person looking at this photo would say, “yes, Kent certainly needs MORE audio equipment on his desk”.

There are essentially two types of amplification used in most headphone amplifiers on the market, voltage mode and current mode, with the vast majority using voltage mode.  Generally speaking, if you look at most of the difficult to drive headphones on the market, you will encounter low sensitivity, low impedance Planar drivers, or high impedance dynamic drivers.

Without going into too much detail regarding all of this, the high impedance dynamic drivers (Like the DT880 600ohm) need current more than absolute voltage to perform.  So you can have an amplifier which provides less absolute wattage, but at a higher current power such headphones.

A basic overview of the difference between voltage mode and current mode amplification can be found in this thread at audiosciencereview.com as well as a more in depth article on Wikipedia.

Most of the high power amplifiers on the market now feed the power through either XLR, or 4.4 mm balanced connectors, with the ¼ inch jack only able to produce a small portion of the total power of the unit.  The issue facing me was that, of the several headphones I own, the two previously mentioned Beyerdynamic models are far and away my favorites.

The 600 Ohm dynamic drivers in the DT880 require a lot of power, and that headphone used only a single ended, ¼ inch connector.  This is also a problem as most single ended amplifiers can only accept RCA input, which is generally 2 volts, whereas XLR inputs are 4 volts.

The Geshelli Archel 2.5 amplifier will accept the full 4 volts from its XLR inputs, and push that through to its single ended output.  This is a great benefit to folks with single ended headphones as they can now use the higher voltage (and generally cleaner signal) from the XLR output of a DAC to feed their single ended headphones. Using the XLR out from my DAC to feed the Geshelli Archel 2.5 XL, I was able to adequately power my 600ohm Beyers in Unity gain.

As I wanted to see how easily the Archel 2.5could be disassembled if one wanted to change colors or materials, my ulterior motive was to get a look at the internal design.  It’s pretty impressive work for a company that started six years ago in a garage.  I worked for a defense contractor for a couple of years and honestly, the PCB on the Archel looked better than anything that came out of that facility (kind of scary when you think about the fact that we made parts for everything from helicopters to tanks). 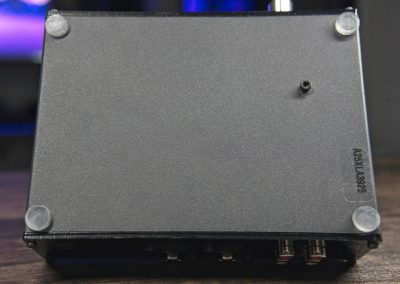 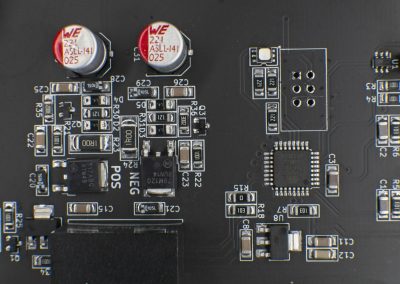 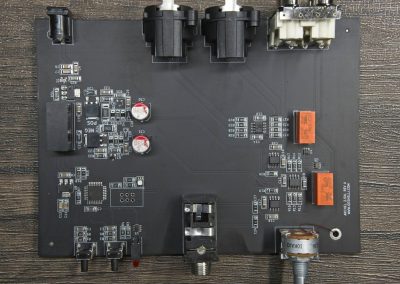 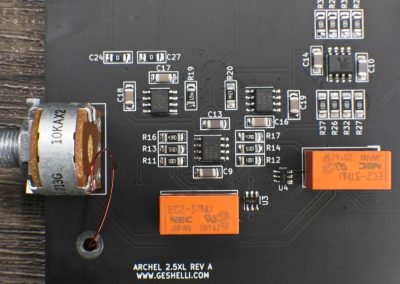 Everything about this shows excellent manufacturing and a well thought out design.  You can clearly identify the two OPA1612 op amps on the right side of the board.  All the power circuitry is situated as far from the audio signal portion as it can be, all but eliminating the chances of the voltage circuitry interfering with or degrading the audio signal.  I was also very impressed by the Alps 10K volume pot.

Many analog volumes have channel imbalance at the lower end of their motion.  Some that I’ve seen had to be turned as much as 20 degrees before the channels came into balance.  The volume pot on the Archel 2.5 has a very slight imbalance at the extreme low end, but the range of the turn where you can hear the imbalance is so small, and so close to zero volume that it actually took a concerted effort to detect it.  Under any normal listening scenario, I doubt anyone would have the volume knob at the position where the imbalance is detectable.

Speaking of the audio signal, if you’ve followed digital audio on the internet at all over the last couple of years, you’ll know that many of the audio dedicated websites have been in a long running conflict over the superiority of either subjectivity or objectivity in regards to audio reproduction.  I am personally of the opinion that if you like the way your music sounds, then it doesn’t matter how objectively clean the conversion from zeros and ones into analog waves actually is.

With that said, I would probably encourage someone listening to MP3s on their Beats headphones to try something a little better.  I have personally found that I generally prefer a cleaner, more detailed sound, over something a little warmer and smoother.  As I was looking for that clean detail, the Geshelli Archel 2.5 was just what the doctor ordered.  There is no coloring of the sound with this unit and the detail retrieval and instrument separation were outstanding.

I do have two minor issues with the Archel 2.5.  First, I wish there was a negative gain mode.  I found that if I was using the XLR input in Unity gain mode with some of my more sensitive headphones I could barely turn the volume up.  This probably wouldn’t be an issue if I had been feeding the amp with 2 volts from RCA instead, or if using a DAC with volume control that allowed me to turn the signal down there.

Second, there is no muting circuit on the Archel 2.5.  If you have headphones plugged in, or are using the pre-amp out to feed speakers, there is an audible pop when turning the unit on or off.  It is not damaging, but it’s certainly not a pleasant sound, especially if you’re wearing headphones when you power the unit on or off.

There is a lot to like about the Archel 2.5.  It’s made in the USA and not “chifi”.  Geshelli is a small, highly responsive company that is easy to like and support.  The unit is easily customizable in appearance at either the time of purchase, or even later on if you’re looking for a change.  In my time using the Archel 2.5 XL, I’ve found that it a really great product for me.  That’s not saying it would be a great product for you.

If you are looking for that warm Class A, or Tube amp sound, if you primarily use In Ear headphones, or extremely easy to drive headphones, you might have better luck with something else.  If you’re someone who is primarily a headphone user, and you prefer clean and detailed music – and you either have a DAC with XLR out, or your purchasing a DAC with XLR out (like the Geshelli J2 balanced DAC) – or even if you’re just someone that wants to support small, American companies, then I think the Geshelli Archel 2.5 amp might just be the amp you’ve been searching for. 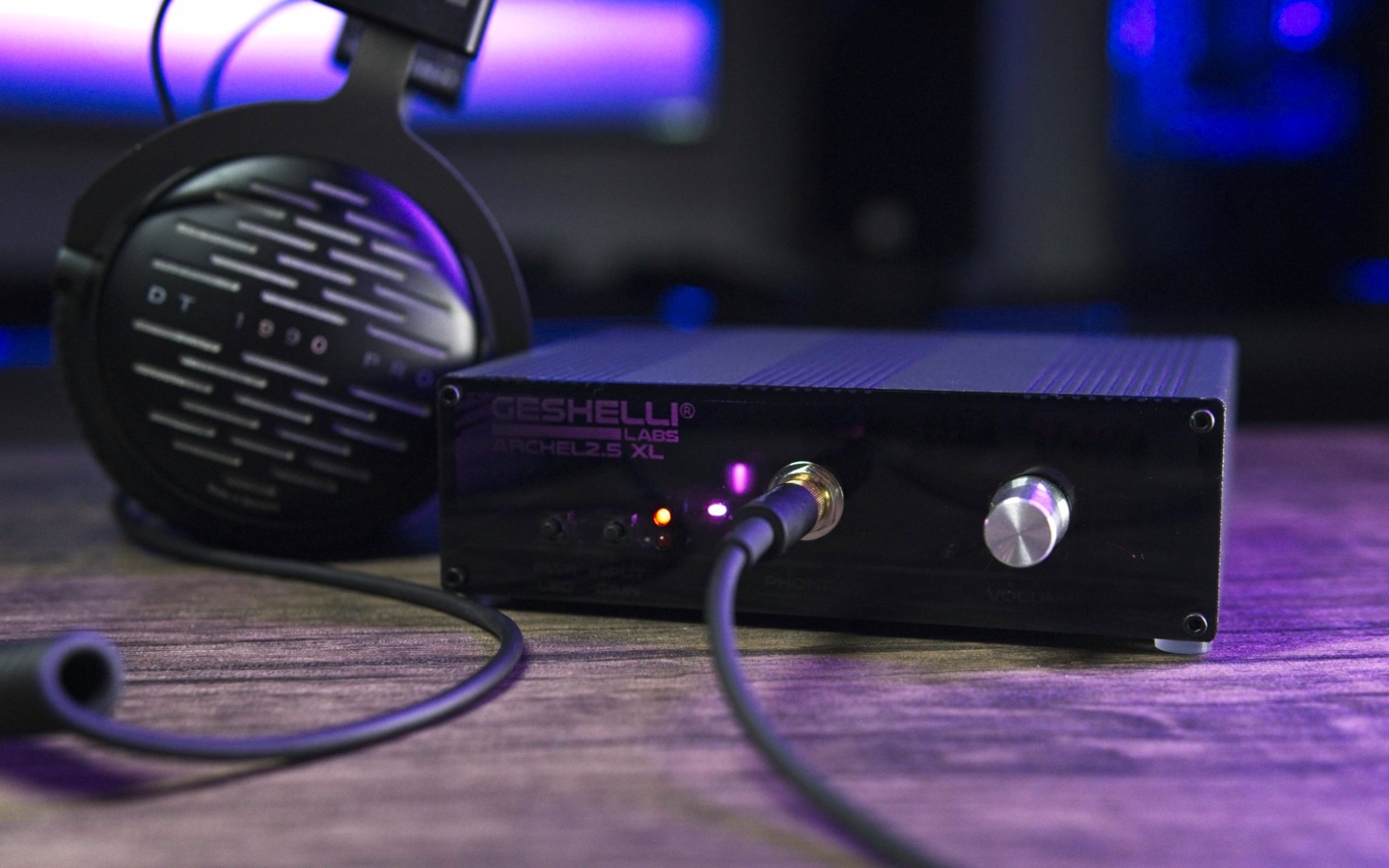 The product wash purchased by the author for the purpose of this review.

Geshelli Labs had no control over the content of the review and was not consulted prior to publication.

Neither PC Perspective nor any of its staff were paid or compensated in any way by Geshelli Labs for this review.

Geshelli Labs has not purchased advertising at PC Perspective during the past twelve months.