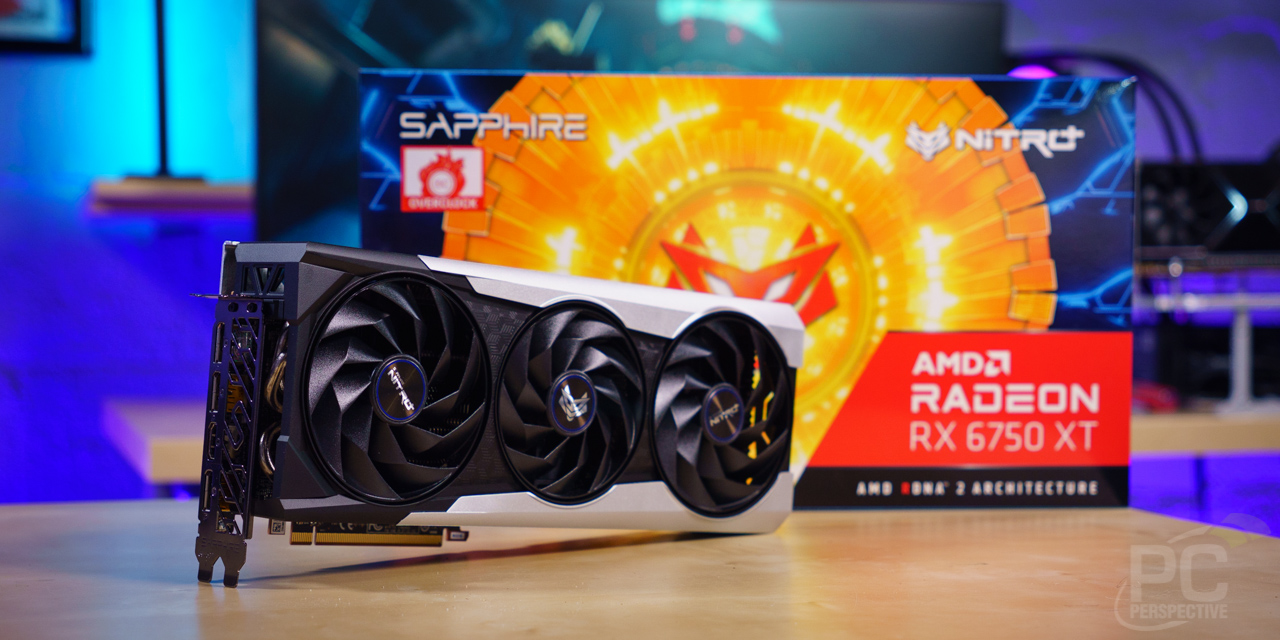 AMD has refreshed their Radeon 6000 Series desktop GPU lineup, and it is available today (May 10, 2022) as this review is being published. While these new products are not based on new silicon, they should offer a healthy performance increase over the original versions, and today we have some preliminary findings to share from a Sapphire NITRO+ edition of the new AMD Radeon RX 6750 XT.

This 2022 Radeon desktop refresh includes three new GPUs, with two models joining the existing RX 6000 Series lineup, and a third product which replaces an existing model. No, these are not all drop-in replacements for the non 6×50 versions, and will exist alongside the originals – except for that one that is a replacement. Got it? Ok, maybe I should explain further. 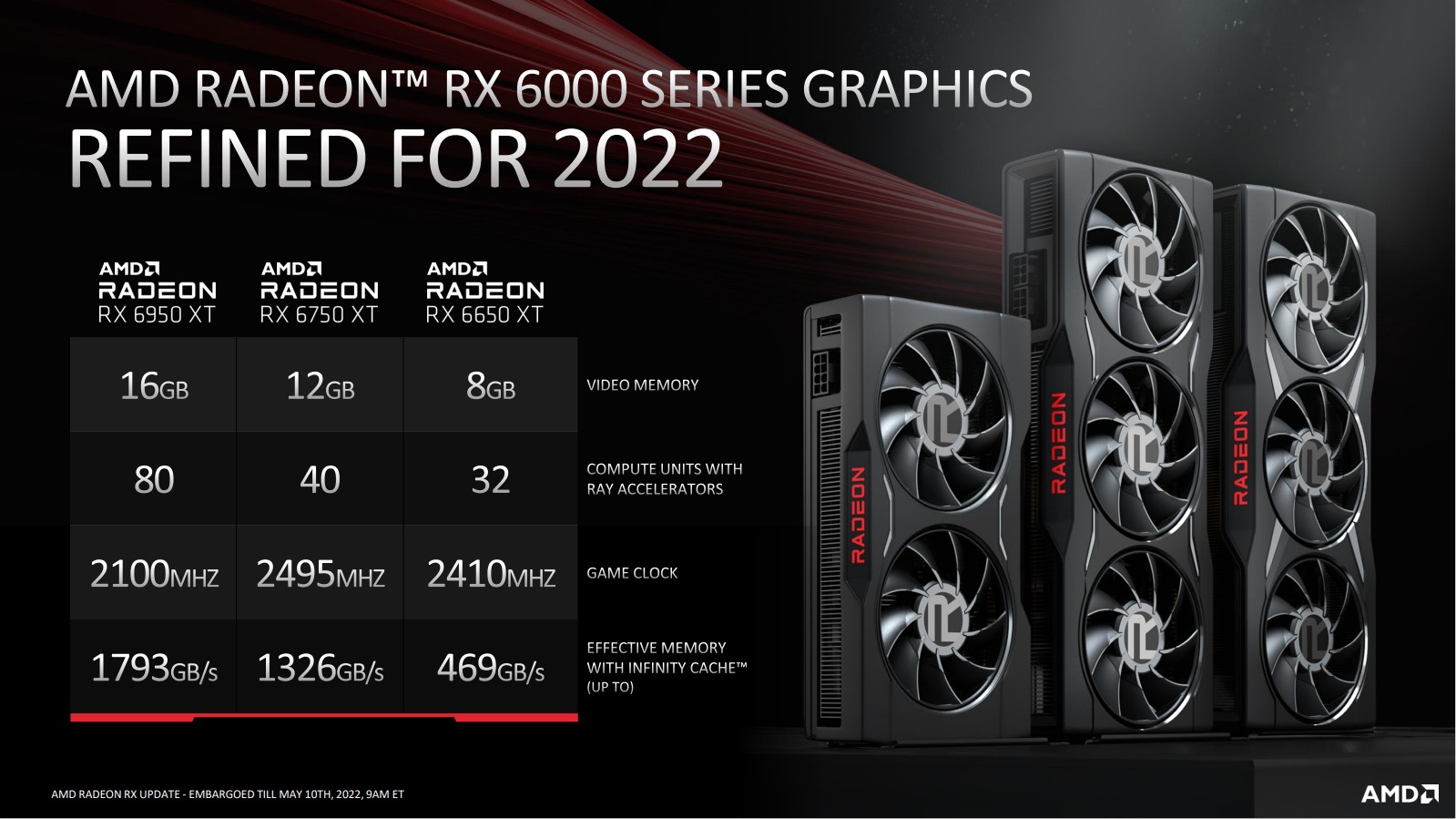 The new flagship Radeon RX 6950 XT and the new RX 6750 XT will be sold alongside the existing RX 6900 XT and RX 6700 XT, as these are not replacements in the product stack. The other new release, the RX 6650 XT, is the replacement product, with the original RX 6600 XT reaching EOL (still in the retail pipeline, but when they’re gone, they’re gone).

These new RX 6×50 products have the same silicon as the original 6×00 models, so basic specs like shader count and memory size are identical. Where these diverge is the speed at which both GPU and memory operate, as this has been increased with the 6×50 cards – particularly with the GDDR6 memory, which is now up to 18 Gbps (from 16 Gbps) effective.

Here’s an incomplete look at the current Radeon lineup:

And before you say that MSRP is dead, and that these prices are academic at best, remember that AMD actually does sell the RX 6700 XT at MSRP, though stock levels are limited when they do show up. Still, our own Josh Walrath purchased one just a few days ago for that $479 MSRP at AMD.com. Lucky! 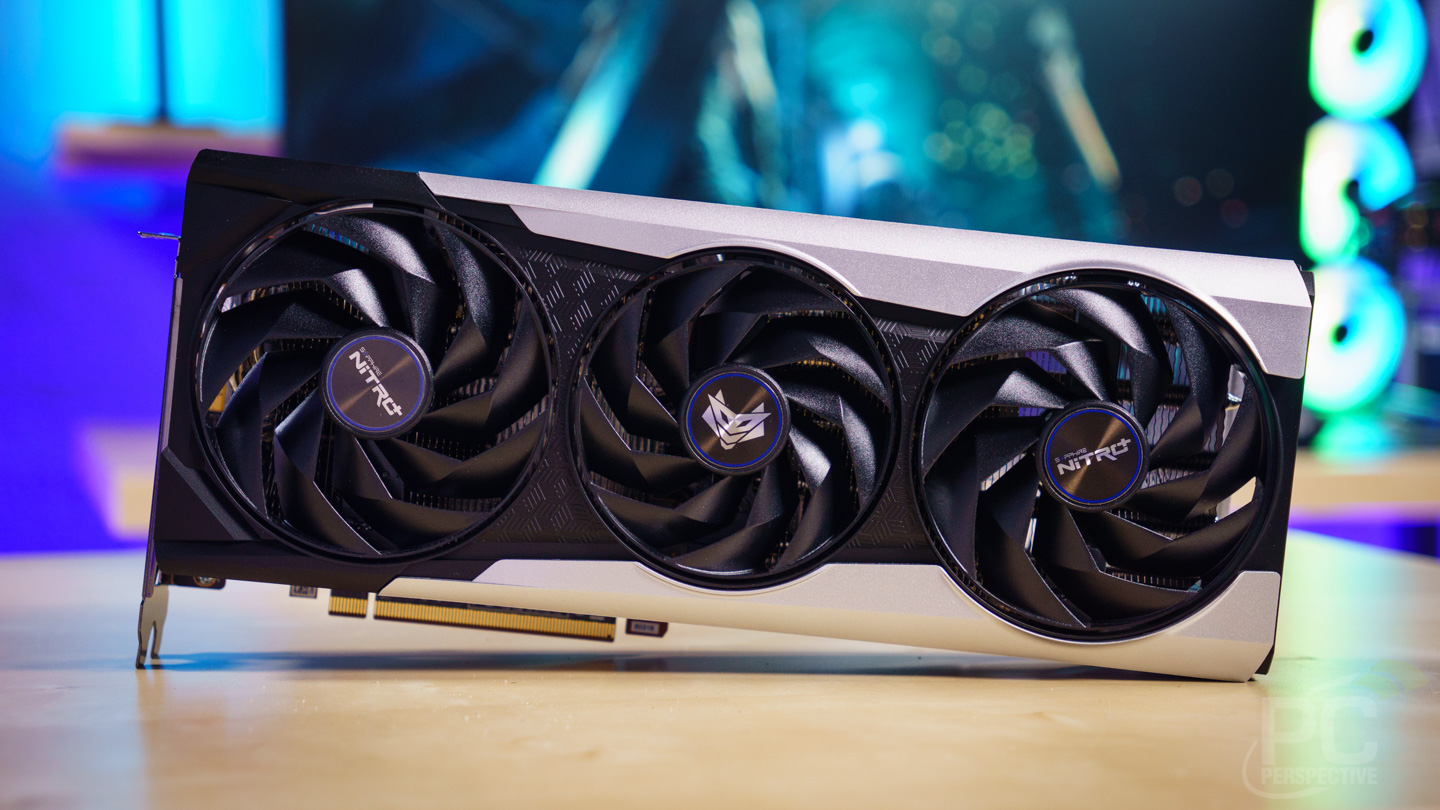 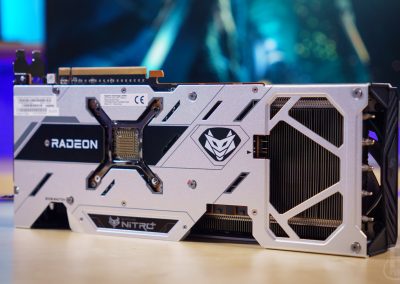 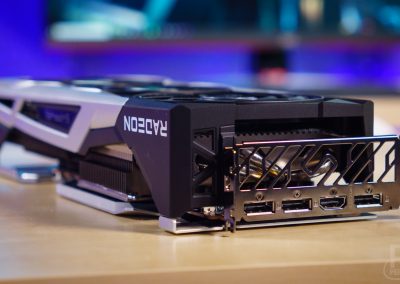 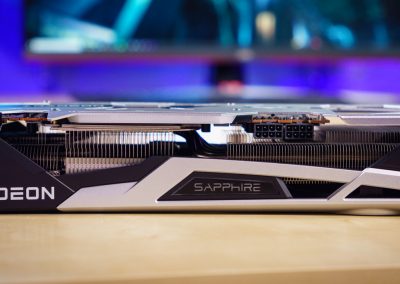 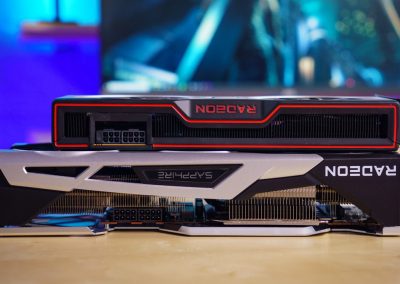 The NITRO+ Radeon RX 6750 XT is a pretty large card, as evidenced by the size comparison with the reference RX 6700 XT in the last photo of the gallery above. Dimensions are 310 mm in length, 130.75 in width (height if the card is vertical), and is 62.19 mm thick with a triple-slot requirement.

The massive heatsink and triple fans seem like more than enough for the increase in total graphics card power, which officially moves from 230 W to 250 W with this refresh version, and actually a bit beyond this for our sample as Sapphire lists 273 W total board power for this NITRO+ card. 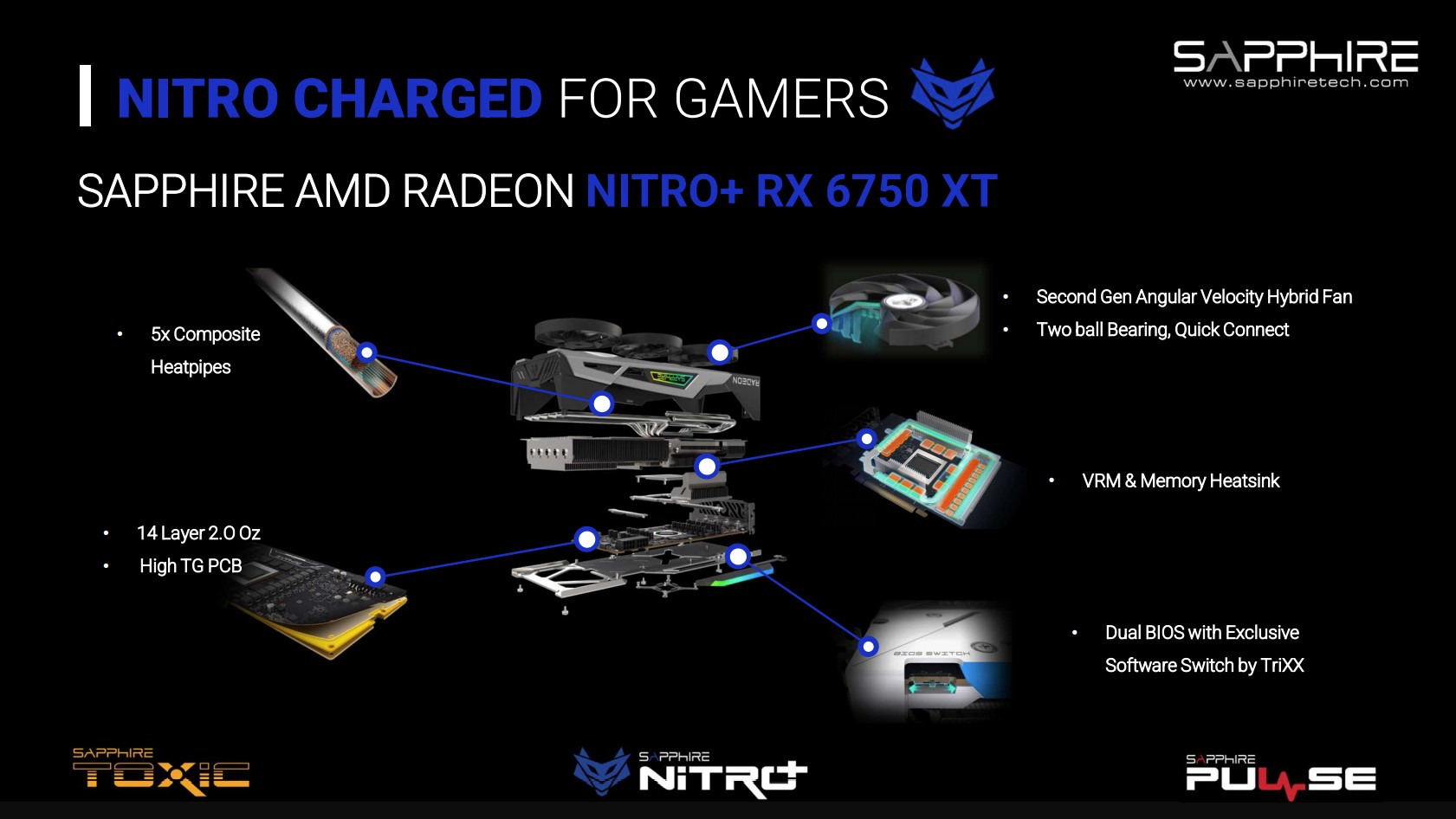 Our Sapphire RX 6750 XT sample offers a Game Clock of 2554 MHz, and Boost Clock of 2623 MHz in the default BIOS position, with a TGP of 230W. A lower 200W “Silent BIOS” is the second position, should you wish to trade some performance for lower power/noise under load. 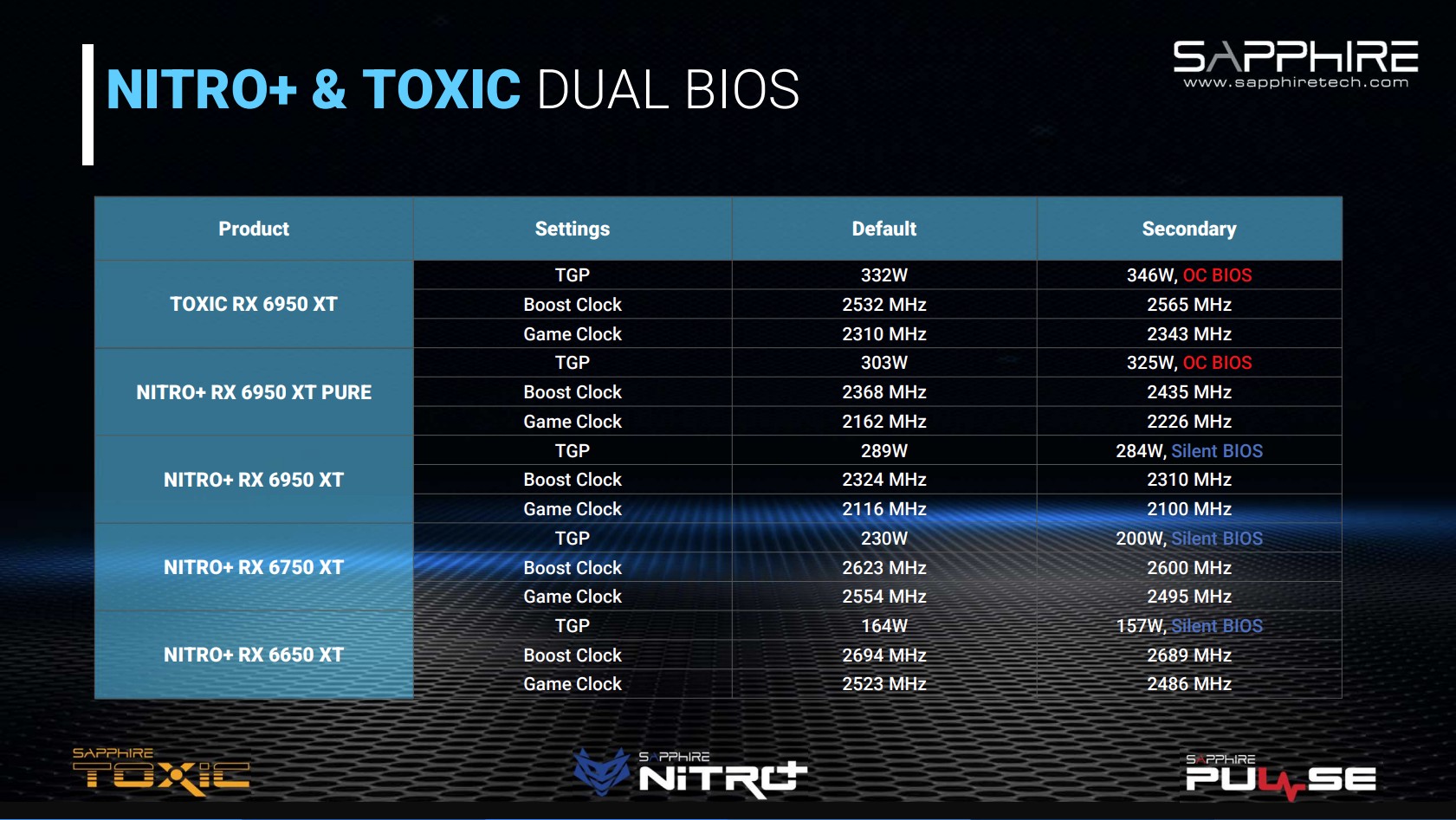 As mentioned above, the memory capacity is unchanged with these new GPUs, with the RX 6750 XT’s 12 GB matching the size of the original RX 6700 XT. We are again looking at GDDR6 memory, but the available bandwidth has risen from 384 GB/s to 432 GB/s on the same 192-bit bus, thanks to a move to 18 Gbps (effective) memory from 16 Gbps.

So, in a nutshell, we have faster GPU clocks and faster GDDR6 memory, though pretty much everything else is the same. I like to think of the RX 6750 XT as an overclocked RX 6700 XT, if GPU overclocking was still as much of a thing as it was a decade ago, anyhow.

A First Look at Performance

Brilliantly, I neglected to notice – until late in the review process – that all of our original Radeon RX 6700 XT testing from just one year ago used a Ryzen 9 3900X CPU, with all recent GPU testing performed with the Ryzen 7 5800X. I GET TO RE-TEST EVERYTHING, AGAINl!

Naturally, I can’t use those older results, and while working diligently on new comparison testing with other AMD and NVIDIA graphics cards, that is incomplete as we publish this. I guess that means there will be a followup testing article soon.

Since I did at least accomplish the task of re-testing the original Radeon RX 6700 XT on the current platform, and using the latest available drivers (as of May 9, 2022), we can see how much of a performance boost the NITRO+ version of the new RX 6750 XT provides over the reference RX 6700 XT.

Before looking at any FPS results, just look at the GPU clock speed increase with this new card: 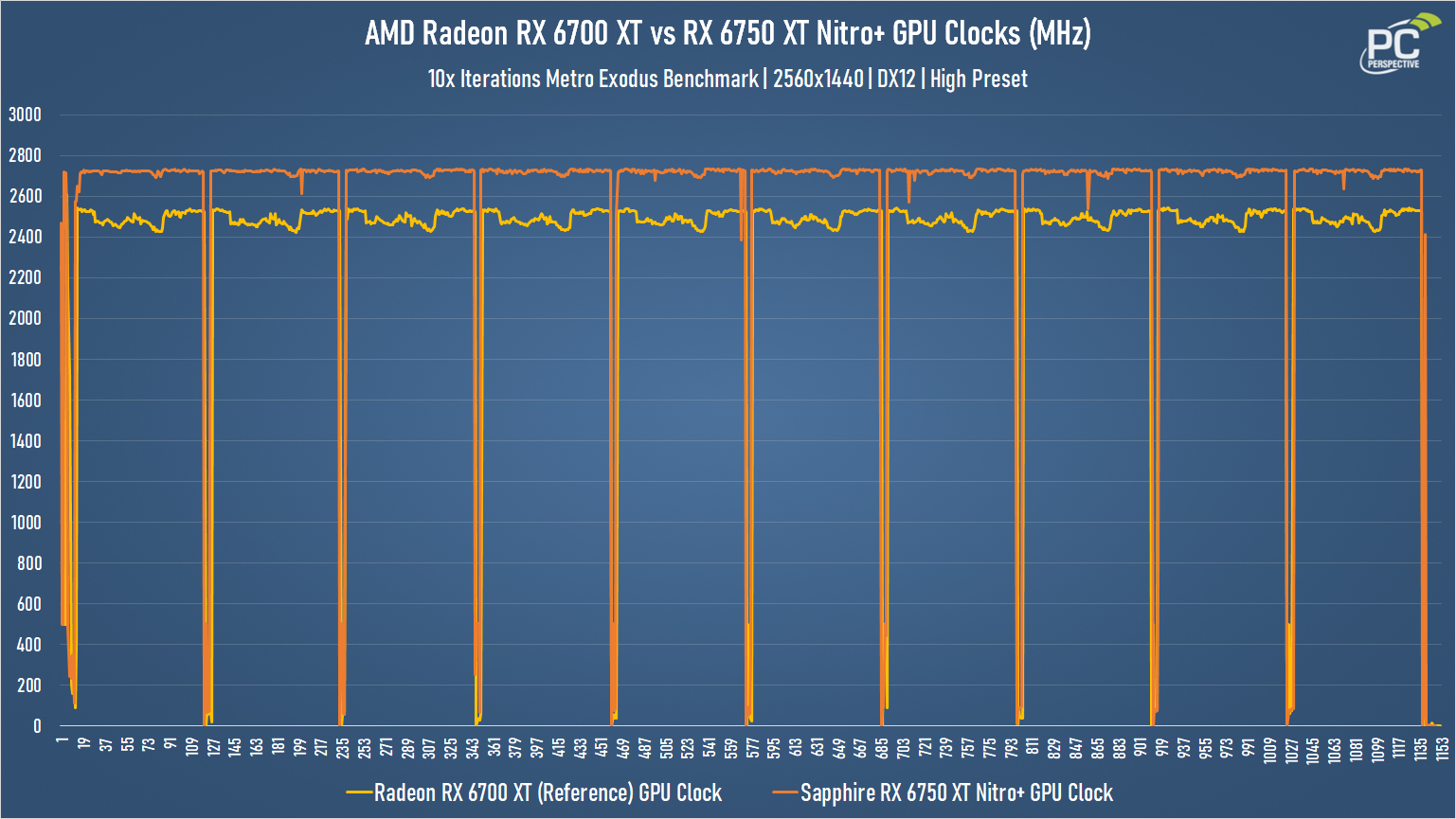 These are much higher numbers than those listed for the NITRO+ RX 6750 XT, as GPU frequencies consistently exceeded 2700 MHz under load. Couple this with the faster 18 Gbps GDDR6 from this new card, and we should see pretty significant uplift over the original. Right?

Here are some head-to-head results:

If we combine the results of the four games tested above we find that the NITRO+ Radeon RX 6750 XT offers an average of about 7% higher performance than the reference RX 6700 XT, which is in keeping with Sapphire’s performance claims (between 106% – 108% of a RX 6700 XT). 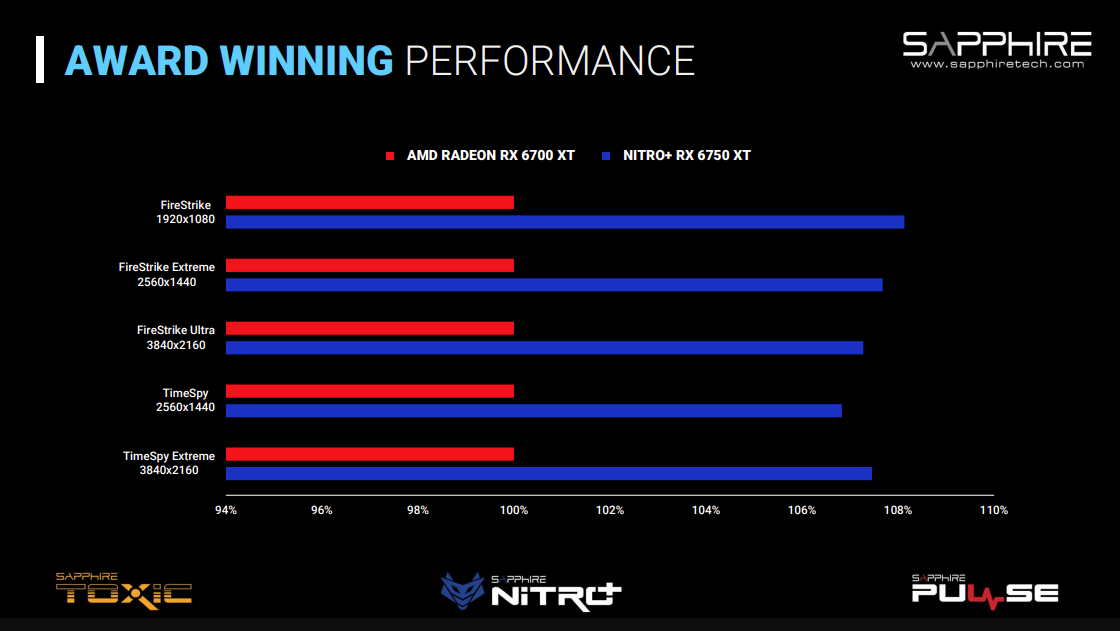 In summary, the Sapphire NITRO+ version of the Radeon RX 6750 XT provided 7% greater performance than a stock RX 6700 XT, though it consumed almost 16% more power. I was going to mention that this also carries a price increase of more than 15%, but that would be based on AMD’s base MSRP for the RX 6750 XT. This NITRO+ card actually has a starting price of $619, which represents an increase of 29% over the reference RX 6700 XT we tested.

While woefully inadequate as a full review, what you have just skimmed through represents our first look at AMD’s refreshed RX 6700 XT, with the Sapphire NITRO+ variant of this new GPU tested here. Sapphire has produced another card with a large, relatively quiet cooler, and excellent thermal performance (our sample saw GPU temps of just over 70 C under extended use in an ~18.5 C room). 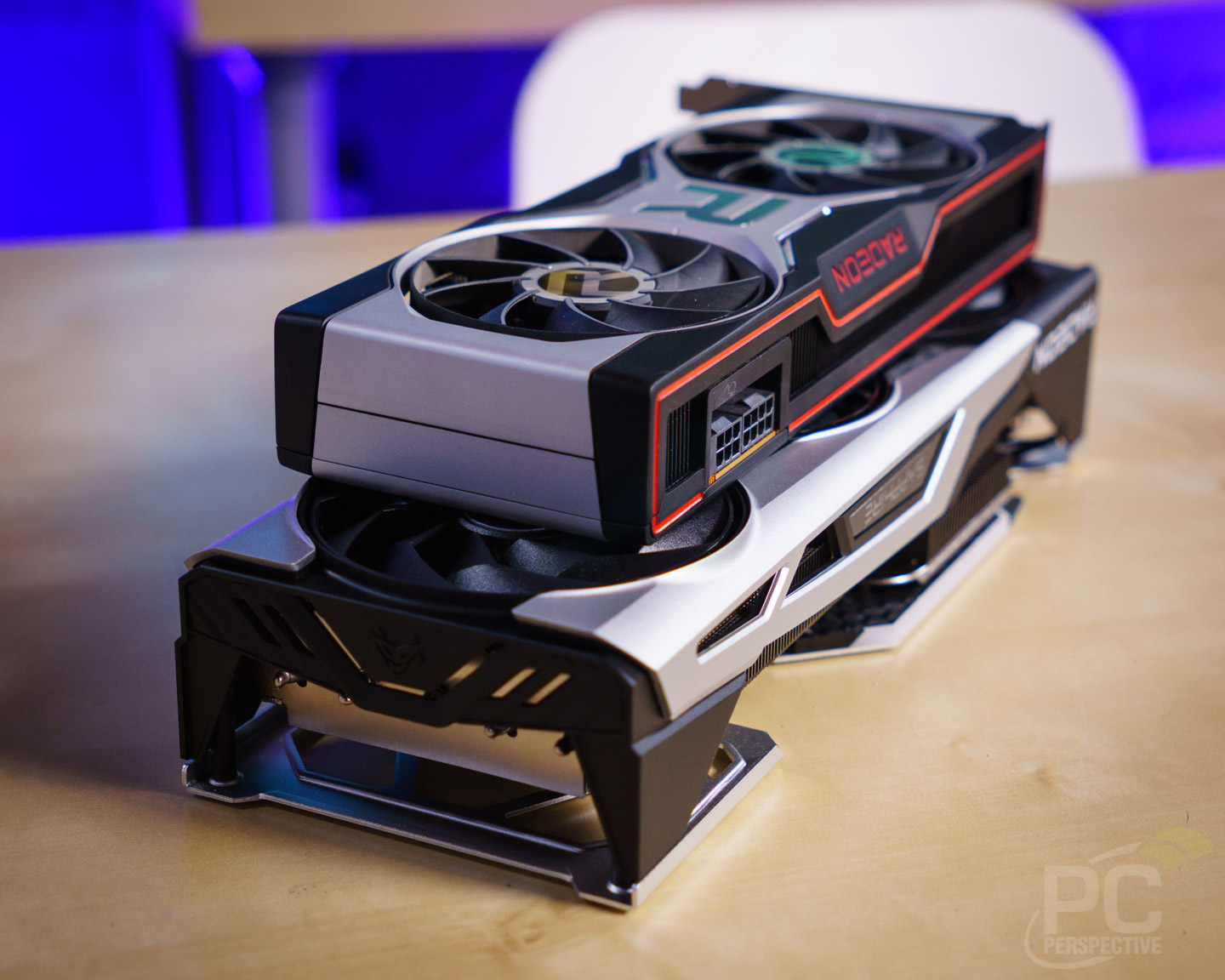 Now, this “initial” review did zero comparisons with anything other than the original RX 6700 XT, though AMD seems to be accurate in their claim that this RX 6750 XT matches (or exceeds) the performance of the NVIDIA GeForce RTX 3070. Validating this claim with the same system configuration is my next task, but it seems certain that this new Radeon GPU is going to offer pretty compelling performance relative to current NVIDIA retail prices.

This conclusion would be a little different if NVIDIA cards were suddenly back to MSRP, though they have been trending in that direction. In other words, if the RTX 3070 goes back to $499 then the $549 base MSRP of the new RX 6750 XT cards will need an adjustment. Not that NVIDIA is going to sit still until then. We could even see a new GPU product from the green team in the near future (just a guess). Once again, competition is good.

For now I will end this by saying that Sapphire’s NITRO+ version of the RX 6750 XT, which they were kind enough to send us for this review, is a typically well built card with cool and quiet operation. I am curious to see how pricing and availability shakes out in the retail market, as rather curiously this refresh did not warrant an announcement from AMD before launch.

The product is on loan from Sapphire for the purpose of this review.

The product will be returned to Sapphire.

Sapphire had no control over the content of the review and was not consulted prior to publication.

Neither PC Perspective nor any of its staff were paid or compensated in any way by Sapphire for this review.

Sapphire has not purchased advertising at PC Perspective during the past twelve months.