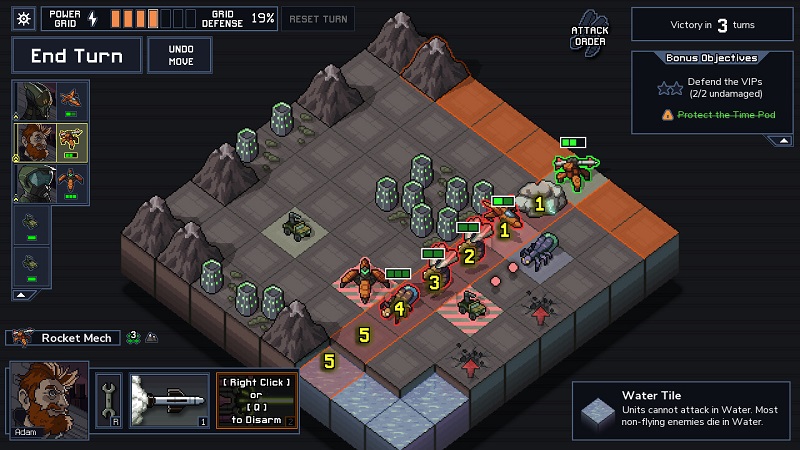 Yesterday Subset Games released Into The Breach: Advanced Edition, free for anyone who already owns the game and replacing the base game in stores, while remaining at the same price.  The update adds new mechs, monsters and missions as well as new pilots with new powers to help you to win … or to jump to a new timeline in shame.

Rock, Paper, SHOTGUN have seen three new mechs, the Thruster which does more damage the further it travels before impact, the aptly named Control mech that allows you to take control of enemies, and a Smog mech which sports an area-of-effect smoke attack both protects you from being attacked and that heals mechs inside of it as well.

If you haven’t tried the game out, it is worth the ~$15 to try out especially with the current 33% discount.  It is simultaneously both incredibly simple and quite complex, thanks to simple but unforgiving gameplay.  Fair warning though, you are going to lose quite a bit.  That is all part of the game, as when you do fail to save the world you can choose one of your mech pilots to transfer to a new timeline while keeping all the skills they developed in their original timeline.   After surviving a few apocalypses that pilot will be much more capable of helping you win.

Check out the trailer at Rock, Paper, SHOTGUN.

The Into The Breach: Advanced Edition update is out today, July 19th. You can pick up the base game on Steam, GOG and the Epic Games Store for £11/$15/€15. It’s also on consoles, and Android and iOS for Netflix subscribers.