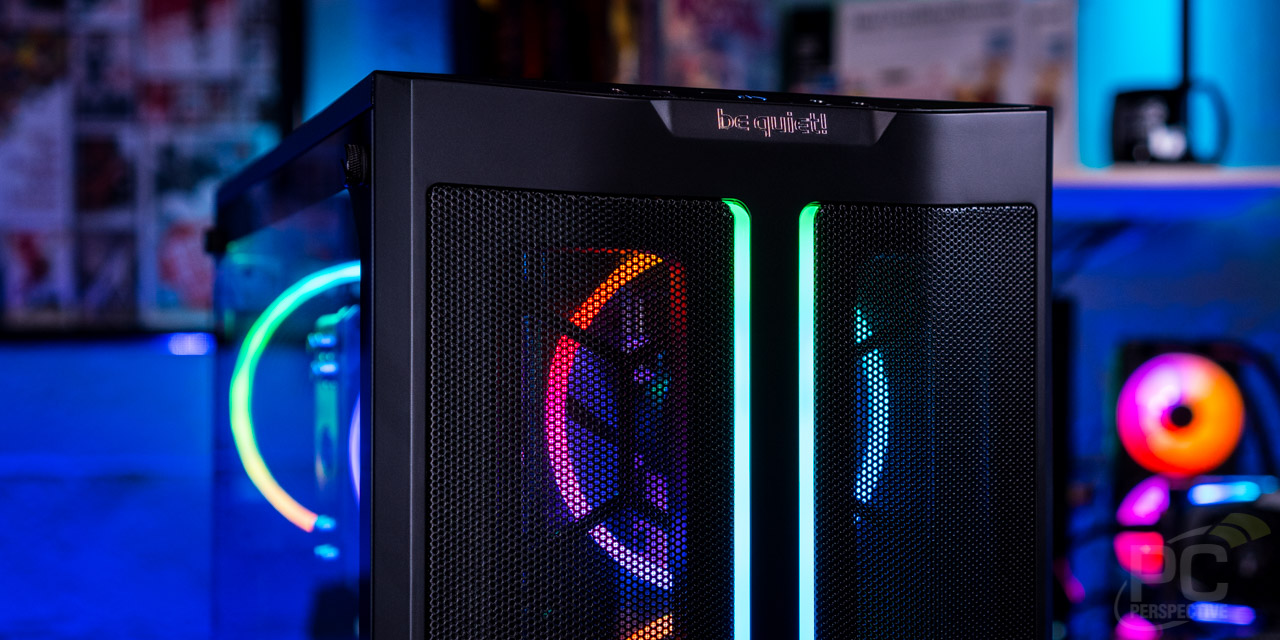 be quiet! introduces the FX line of colorful components

Now celebrating their 20th anniversary, be quiet! has a trio of new SKUs which make up the FX world of products, with a case and two coolers providing a fresh take on existing models. These FX products are also launching at discounted prices throughout August and September, according to be quiet!.

Today we are looking at the Pure Base 500 FX, which is based on the Pure Base 500DX, a case that we looked at back in April 2020. The new Pure Base 500 FX is a high-airflow design which offers four preinstalled Light Wings 120mm high-speed fans, and offers both external and internal ARGB LED lighting (ARGB and PWM fan hub included), among other features.

With the previous Pure Base 500DX I praised the “overall quality of its construction, outstanding performance, and stylish appearance”, and the new 500 FX model increases the included fan count from three to four, and adds an ARGB/fan hub. This is still a high-airflow design, as its mesh front and triple intake fans should promote some very good thermals. Let’s check it out.

The be quiet! Pure Base 500 FX Black offers impressive lighting with multiple modes and maximum airflow for high cooling performance.

“The be quiet! Pure Base 500 FX Black offers impressive lighting with multiple modes and maximum airflow for high cooling performance.”

If you are familiar with the Pure Base 500DX, the appearance of the 500 FX will be familiar to you. This is a compact ATX design with a mesh front, separated in the center with a section that integrates two vertical lighting strips. 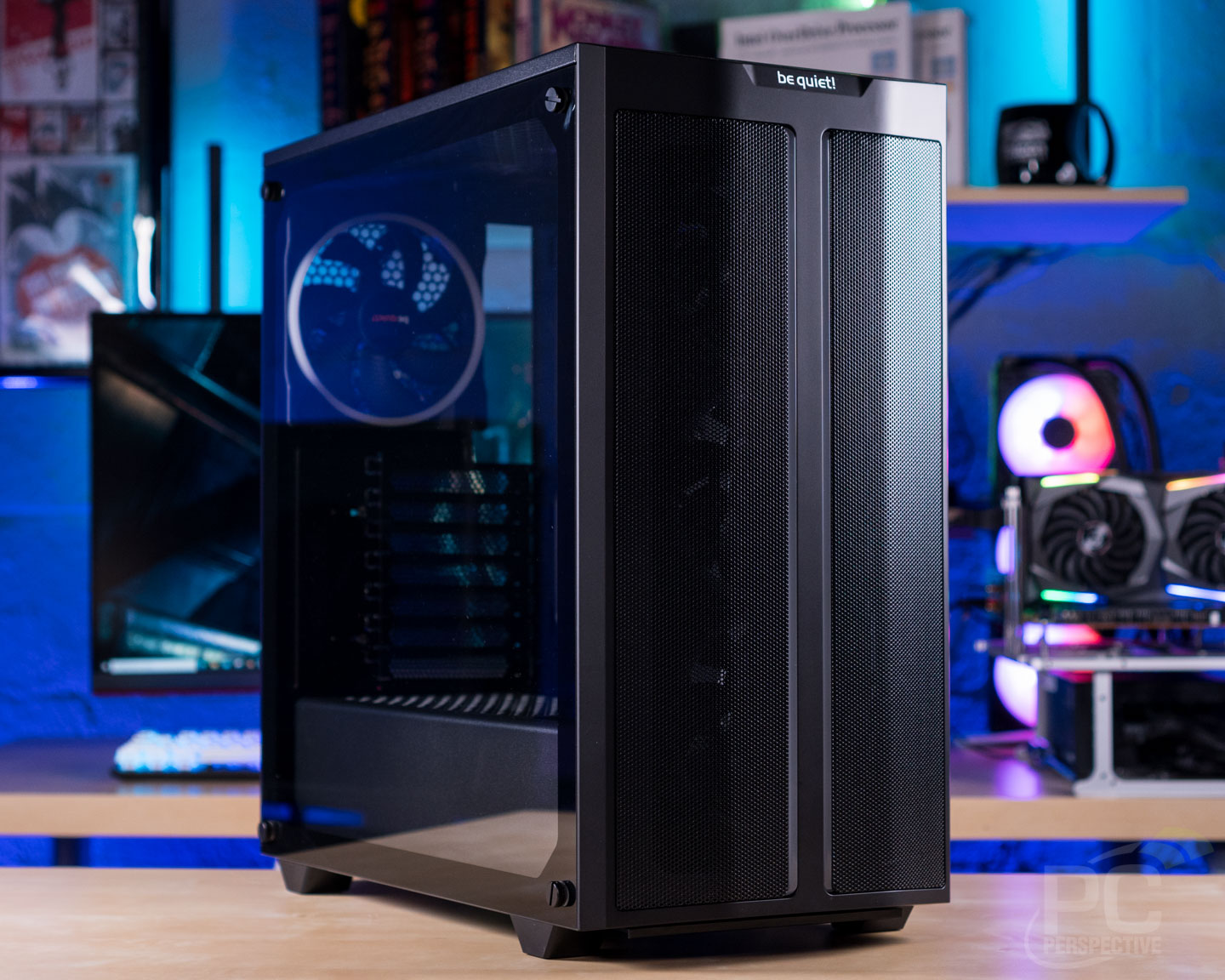 As is mandatory with RGB case designs, the 500 FX features a tempered glass side panel on the component side, and there are a total of four included ARGB fans – plus those front light strips. More on lighting later, as we need to look at the rest of the enclosure design first. 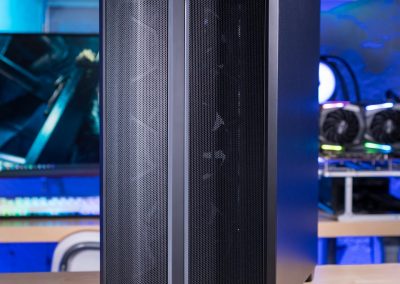 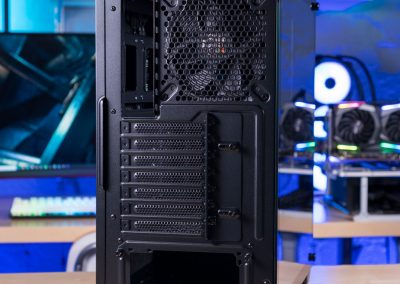 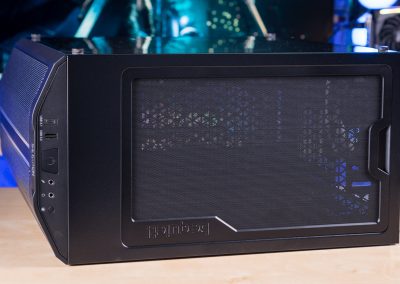 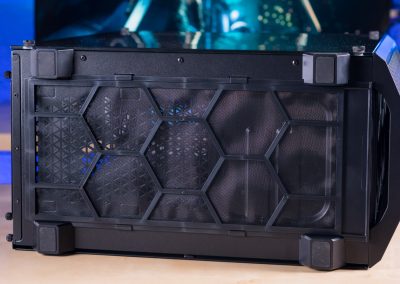 There are three screen filters on the 500 FX, with a slide-out bottom filter and a magnetically attached top filter. The screen filter on the front intake is also removable, though it does require the removal of the front panel – which snaps off pretty easily.

be quiet! offers this exploded view, providing a better look at the construction of the enclosure than my photos can provide: 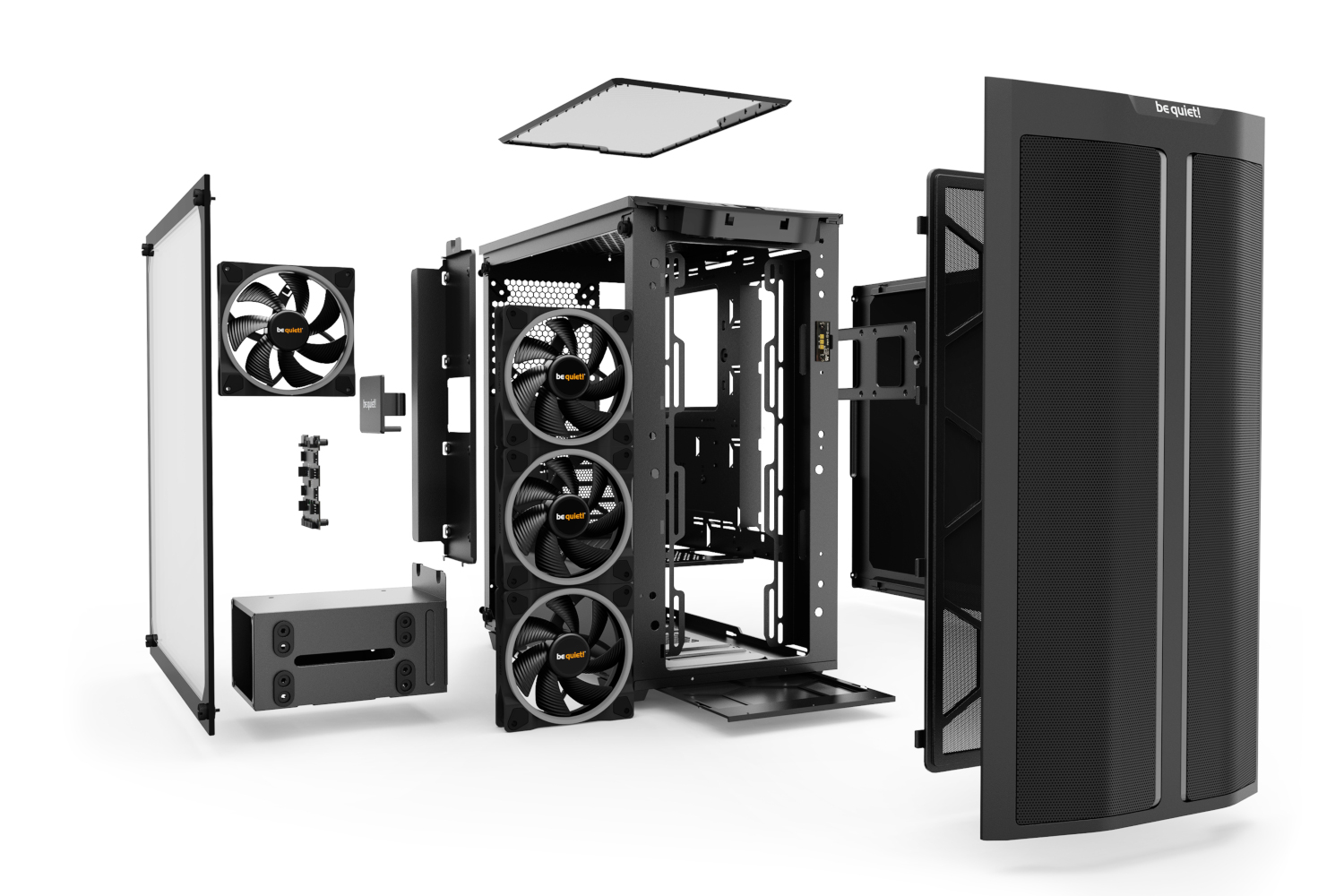 There are six fan mounts within the Pure Base 500 FX, including two at the top of the case, visible with the screen filter removed: 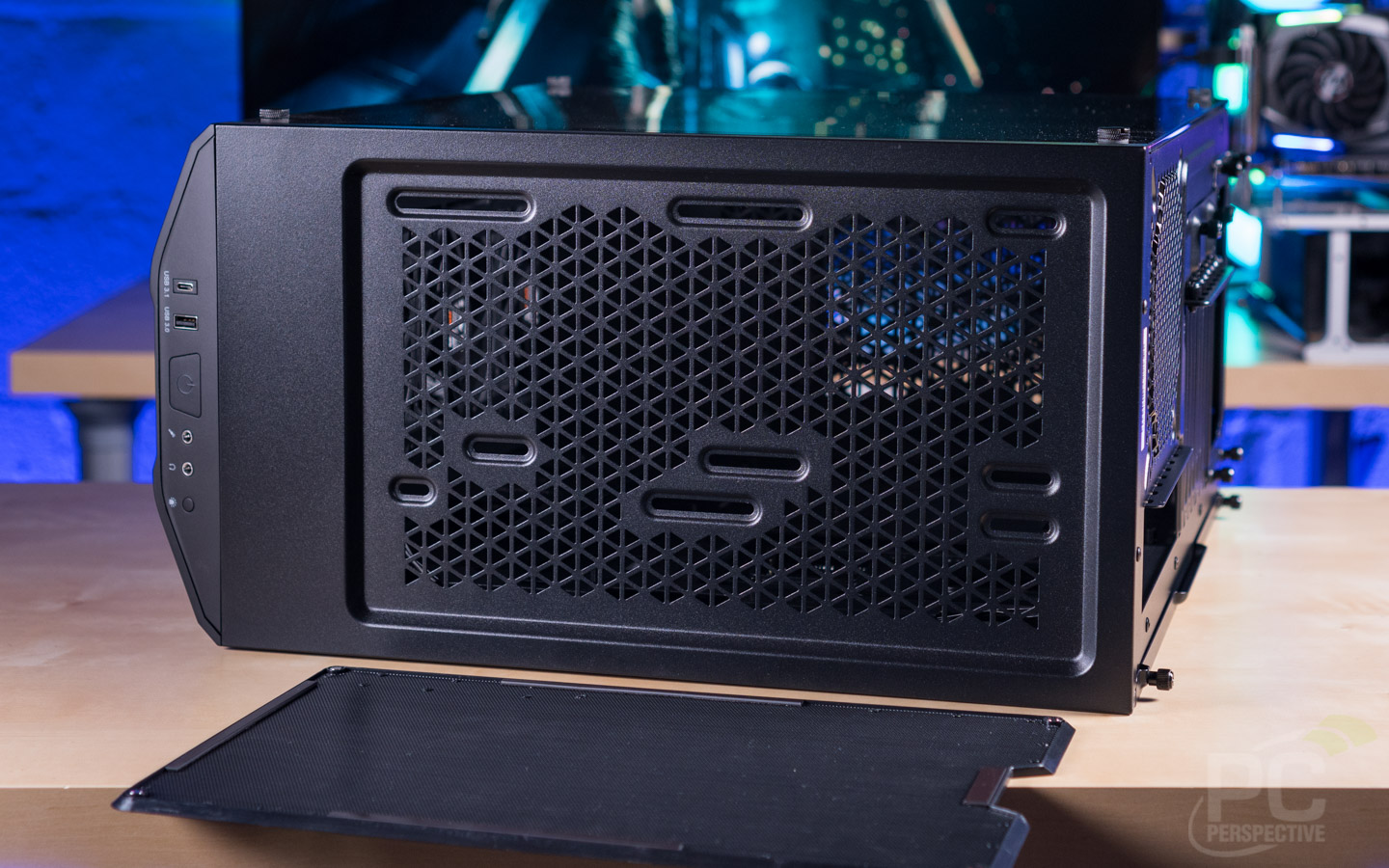 Up to a 240 mm radiator can be installed up top, with larger radiators only supported on the front intake (up to 280 / 360 mm). Next, we will look inside the case – but first, we have to take the side panels off. 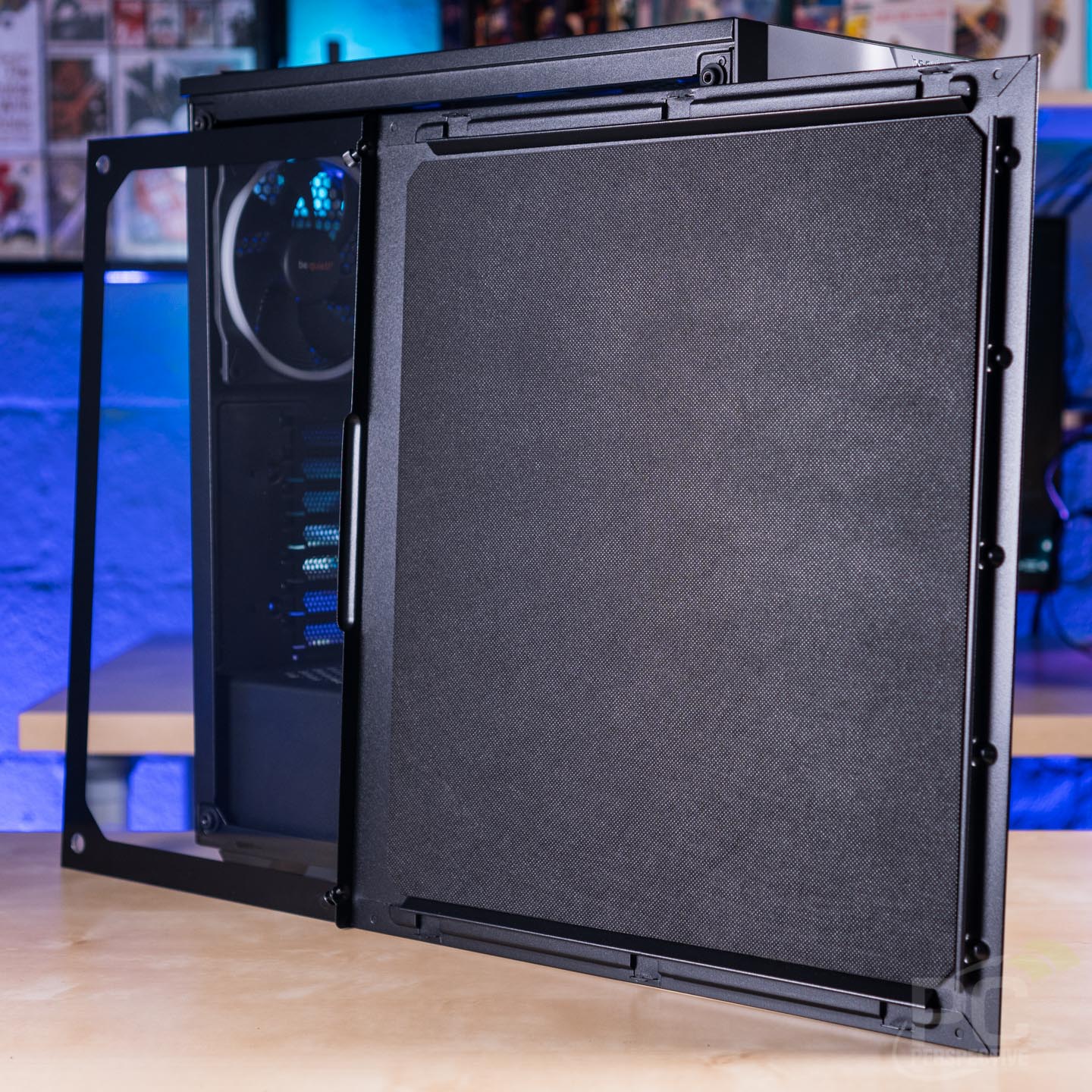 The tempered glass panel for the component side has a thickness of 4 mm, and if there is a tint to the glass it’s pretty minimal. The back side panel features an insulation mat to help keep noise down, though this high-airflow design will not be the best choice if silence is your goal.

Looking inside the case we see the same internal layout as the Pure Base 500DX, with the primary difference being the included fans with the 500 FX, which offers three Light Wings PWM 120 mm on the front intake, and one Light Wings PWM 140 mm fan on the rear exhaust mount. 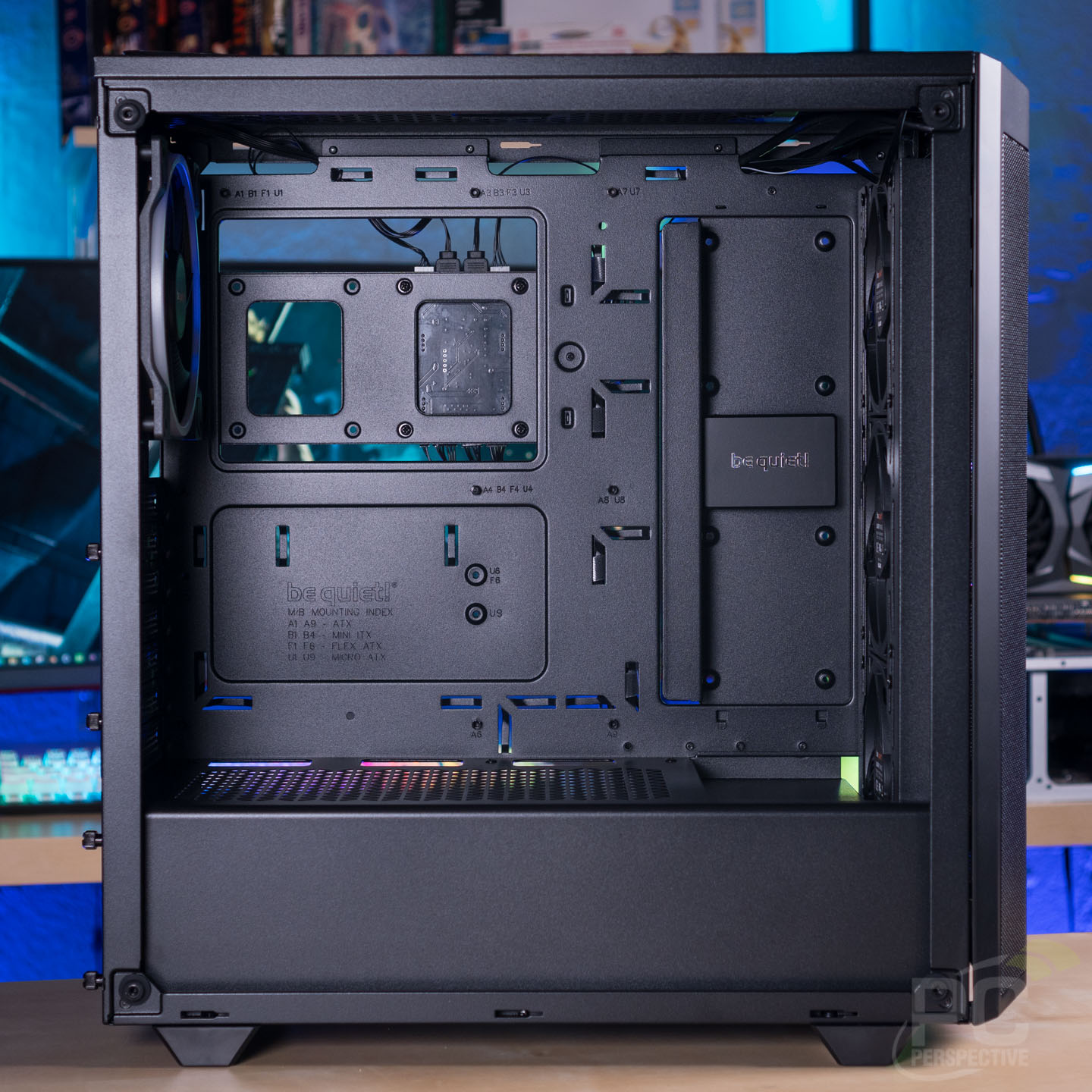 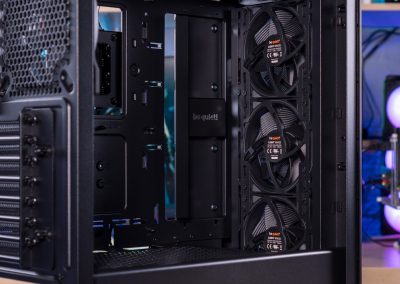 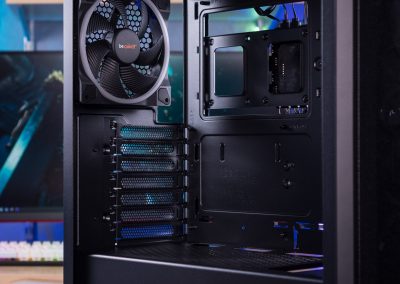 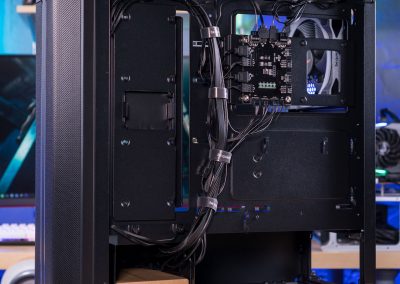 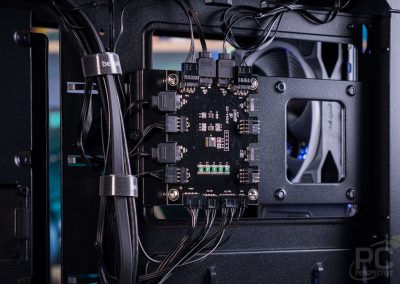 Just as with the Pure Base 500DX, the Pure Base 500 FX has a pre-mounted RGB light strip inside the front edge, just out of view (and I forgot to take a photo, though you can see it in the 500DX by clicking here), which adds even more RGB illumination when the system is powered up.

If you haven’t noticed by now, the Pure Base 500 FX is basically the 500DX with a different, more numerous set of pre-mounted fans, and a built-in fan and lighting control hub. I won’t go over the build process here, but you can reference the build notes from my Pure Base 500DX review at this link.

Obviously lighting is a big part of the 500FX, and there are a number of lighting options available with the 500 FX. These options are controlled initially via a button on the top I/O, which cycles between a number of different colors and modes.

Holding down this ARGB lighting button for 3 seconds engages the sync function, as the control hub passes the lighting control through from the motherboard ARGB header. This works properly – though I found that the red/green color channels swapped with the ASRock board I was using – or maybe in the software… (I’m not the only one who has experienced this with ASRock boards, it seems.) 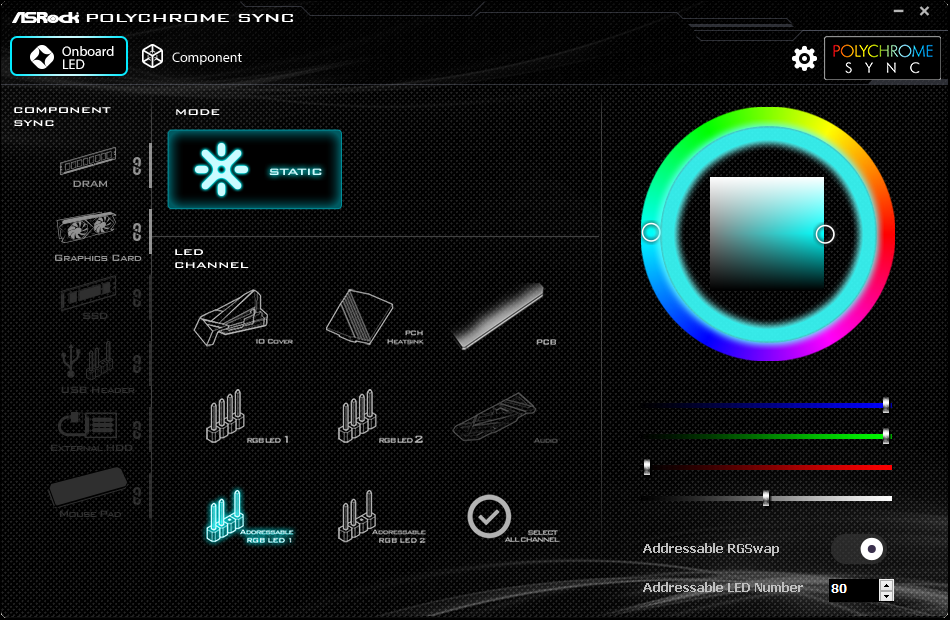 Without enabling the “Addressable RGBSwap” the case lighting was not syncing with the ASRock Z590 Taichi motherboard I used for this build, until I realized that the red slider was adjusting green, and the green slider was adjusting red. Swapping these corrected the issue.

Here’s a look at the interior with the purple color I ended up with for this build: 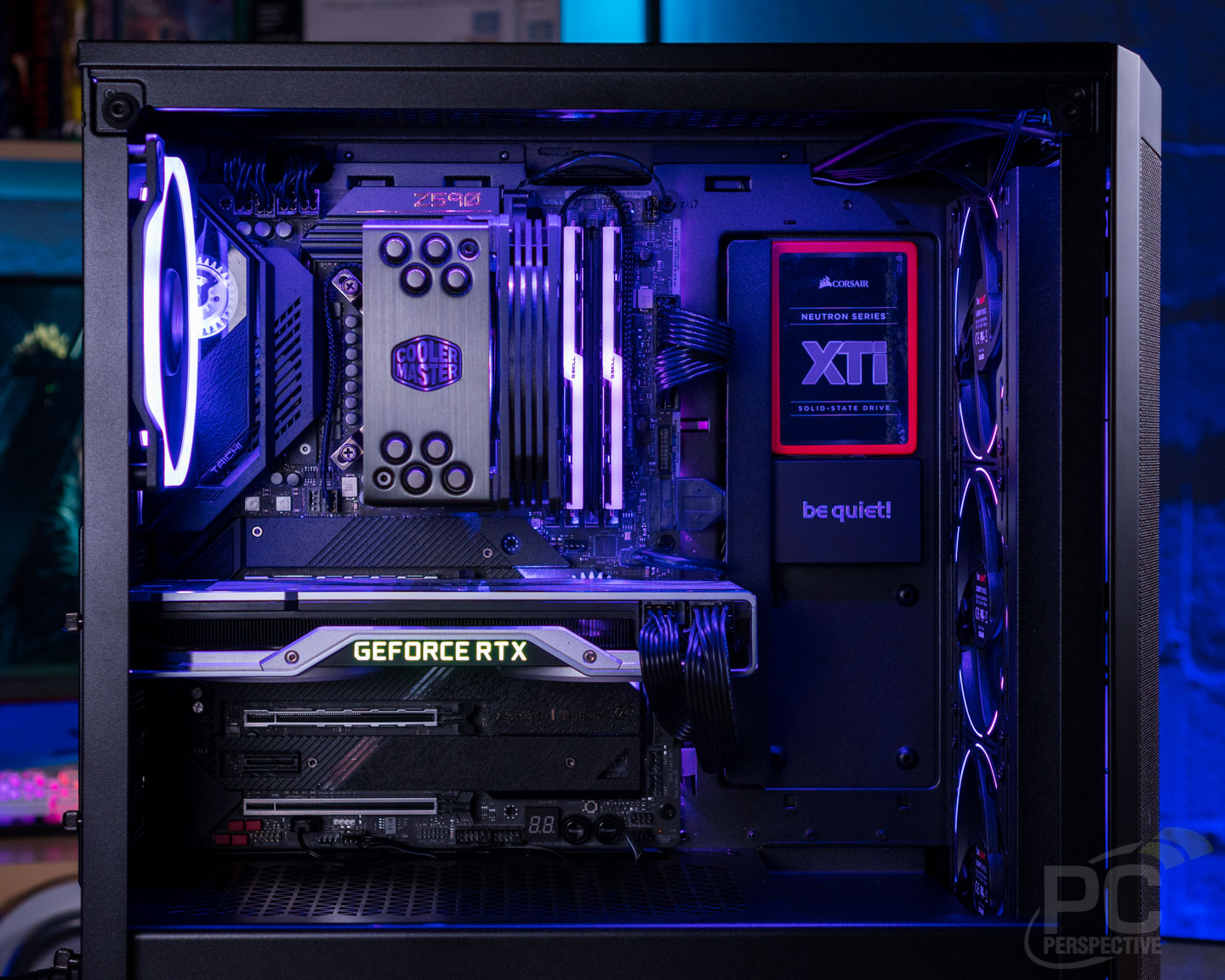 This is not a crazy amount of lighting, and of course you have the option of choosing no illumination at all, if for some reason you purchase a case with ARGB fans and want to turn off their LEDs. The biggest impact comes from the front of the case, with those two vertical lighting strips (not to mention the triple ARGB fan lighting).

Here is a look from the front with rainbow lighting at its most colorful: 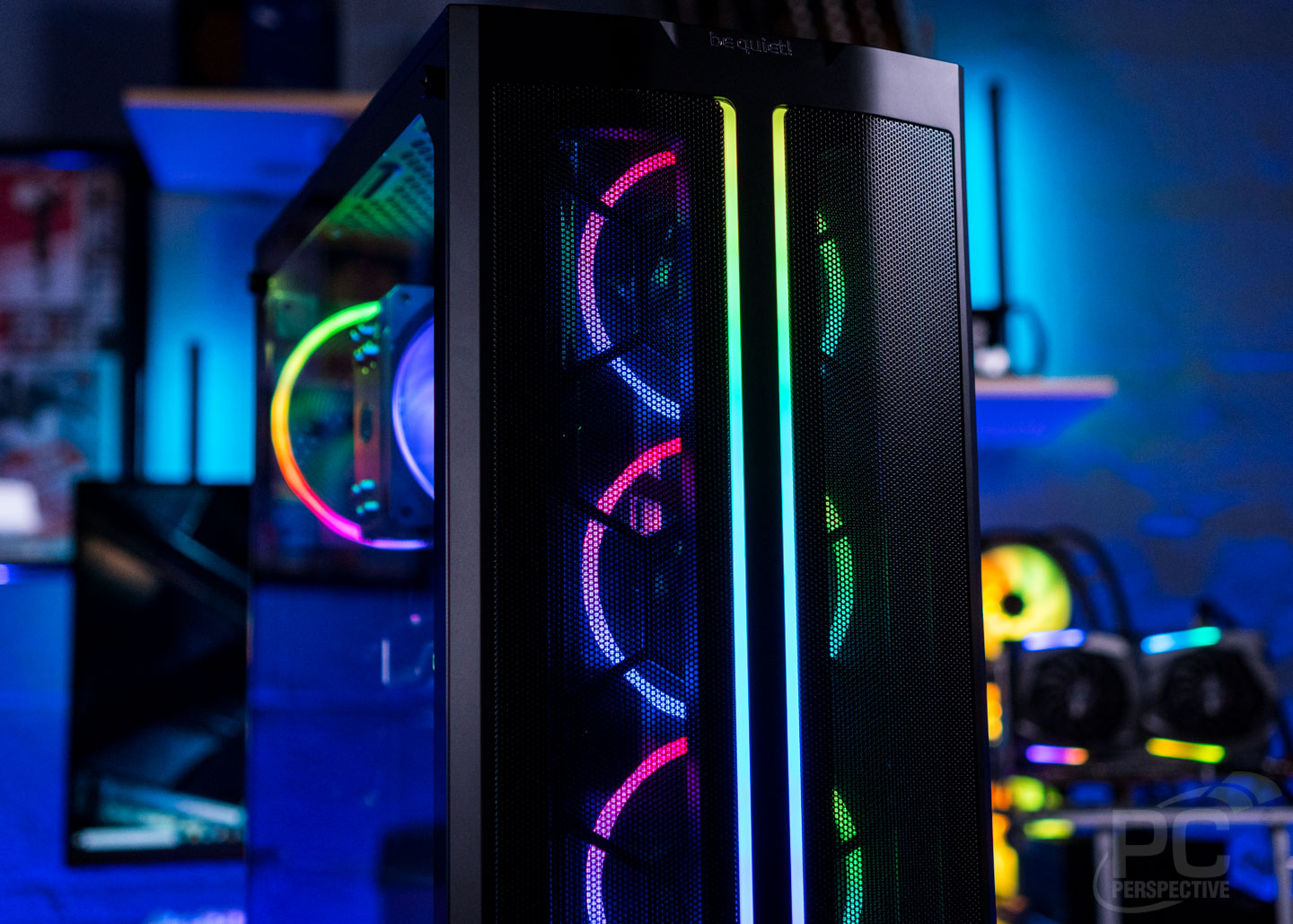 Can you believe that we are looking at a be quiet! product here? Rainbow RGB has reached peak saturation in the market, certainly. As mentioned above I ended up choosing a single color for my build, but from the outside this is not a subtle looking case.

Turning our attention to the area behind the system, I’ll mention that cable management isn’t particularly challenging with the 500 FX, and while this isn’t the neatest looking build I spent very little time organizing cables: 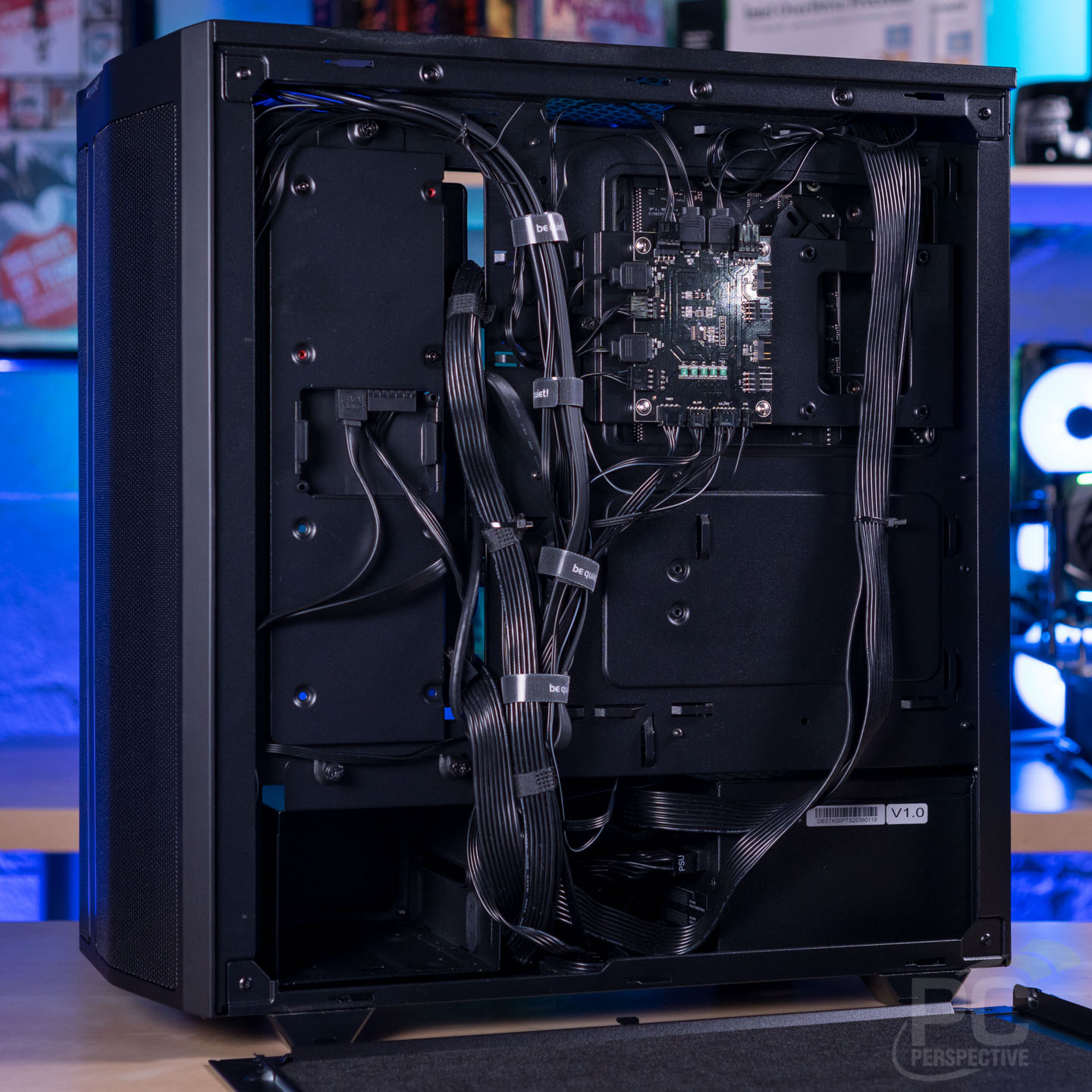 With the system complete, it was time to test out thermal performance, and see how much of a noise penalty this high airflow case might incur.

To assess performance I simply compared thermals with the components on the open testbed vs. inside the Pure Base 500 FX. It’s important to note that fan speed will affect performance to a great extent, and to this end I had the case fans set to the motherboard’s “performance” preset fan curve, and the CPU fan set to 100%. I’ll cover how fan speeds affected noise shortly.

First we will look at open testbed vs. enclosure thermals:

With the case fans set to the “performance” preset the airflow helped the tower cooler manage temps with the tested 11th Gen Core i9 processor (power limits were enforced, hence the temps only in the 60s), and in spite of the airflow boost (I’m assuming) the relatively small size of this enclosure affected load temps with the RTX 2080 FE card I used, but not to any large degree (get it?).

At this “performance” fan preset for the case fans there was a slight increase in GPU load temps within the enclosure (vs. the the open testbed) with these particular components, and a decrease in CPU temps inside the case.

Turning things up to 100% with all four of the included case fans resulted in temps even better than an open testbed – understandable considering how much high airflow can help air-cooled components like these.

On to noise levels, and this was interesting. At idle, when I had the system configured as it was for the thermal testing seen above (CPU cooler set to 100%, other fans at “performance” preset), idle noise was a very noticeable 36.2 dBA (measured with the meter 12 inches from the front of the case). On the other hand, total system noise only rose slightly above this under a gaming load, hitting 36.7 dBA on the meter.

When I set the CPU fan to the same “performance” profile as the other fans, idle noise was barely audible, registering at just 30.7 dBA – again with my meter positioned 12 inches from the front of the case. Under a sustained load this system will again rise to the mid 30s, but what about with the case fans at 100% – something I never saw with my testing?

If you really want to push air through the 500 FX, setting the case fans to 100% (like I did with the updated chart above) results in a tolerable 38.4 dBA noise level, which is not only a lot less than I was expecting, but probably a higher number than you will ever hear given the very close proximity of my meter to the front of this high airflow case (unless you are pointing your ear at the case from 12 inches away).

Considering the Pure Base 500 FX is essentially the same enclosure as the Pure Base 500DX, but with more fans and enhanced ARGB lighting, I don’t have much to add to my conclusion to that earlier design, which I liked quite a bit. Now, speaking only for myself here, I thought this style of case lighting looked better with a white enclosure, since it has a brighter overall appearance, but be quiet! is not offering the 500 FX in white as they did with the 500DX. Oh well.

As with the Pure Base 500DX, construction feels solid overall, and thermals are very good. I like the choices made with regard to fan placement, as a 140 mm rear and triple 120 mm intake fans will get you close to the best performance possible from this design. 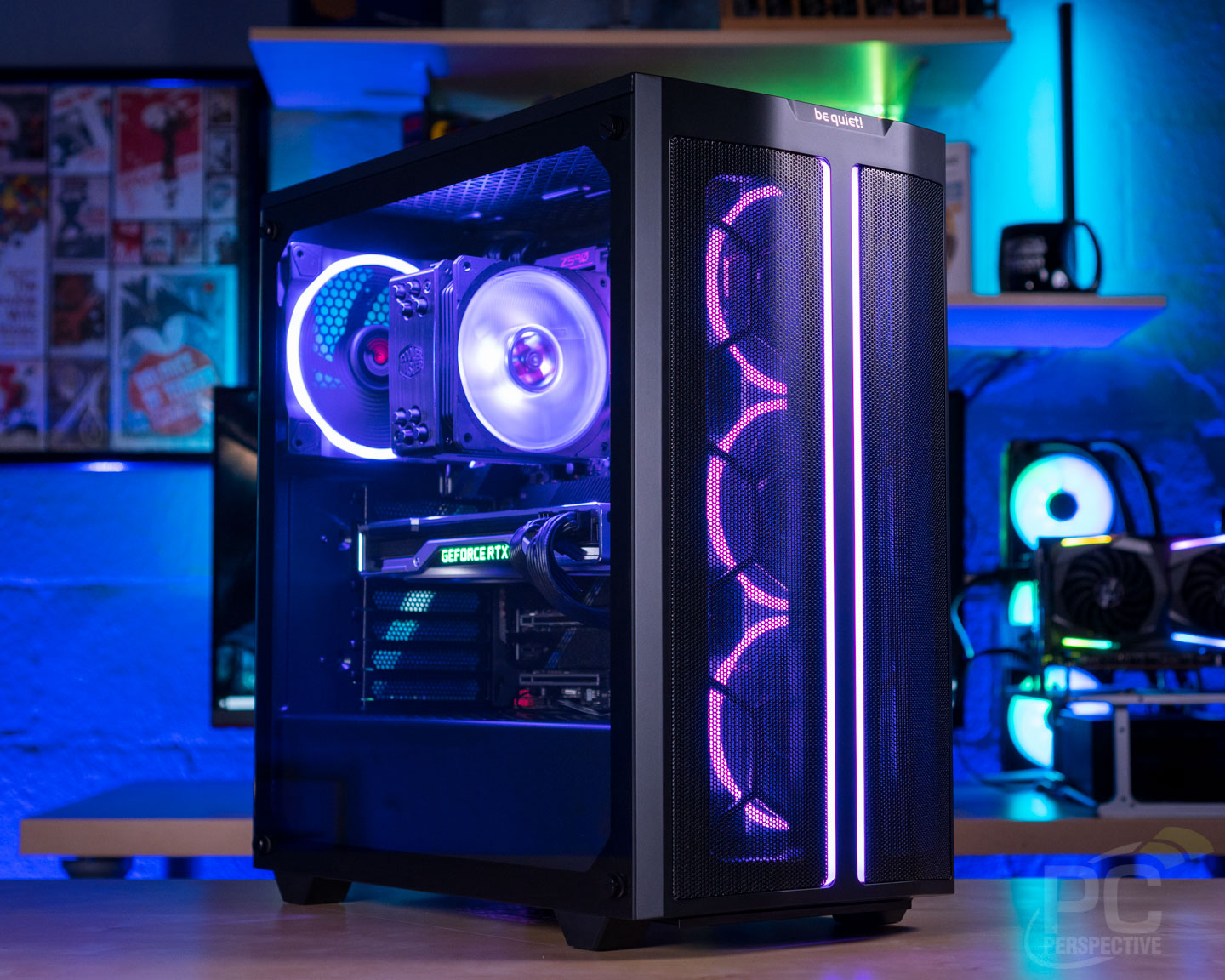 Value is solid, as well, considering that (right now, anyway) the Pure Base 500 FX is available for $119.90 on Newegg (sold by be quiet!, shipped by Newegg). When that initial price drop of $30 eventually ends, the case is still quite reasonable at its $149.90 USD MSRP, considering the inclusion of four ARGB be quiet! fans.

I’m personally less a fan of the lighted fans/lighted vertical bars look of this design, but I could easily turn off the front fan lighting and recreate the look the 500DX that I was a fan of. Regardless of personal aesthetic preferences, you really can’t go wrong with the Pure Base 500 FX if you’re looking for a compact ATX design with good airflow and ARGB lighting. 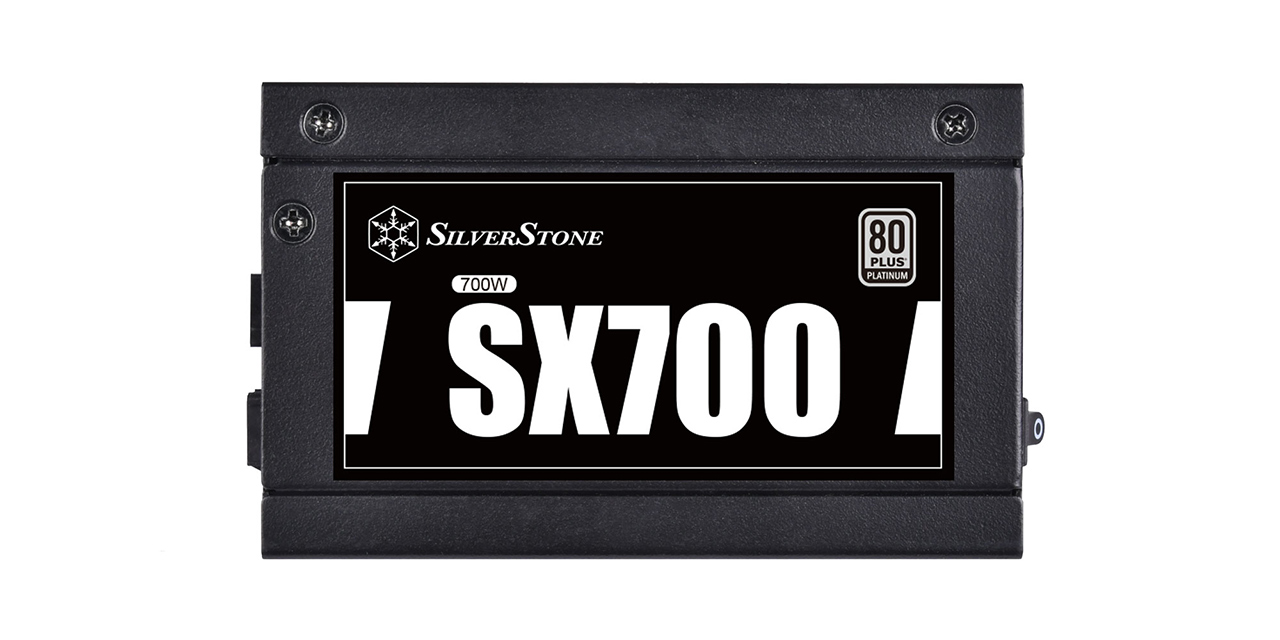 Both big and flexible 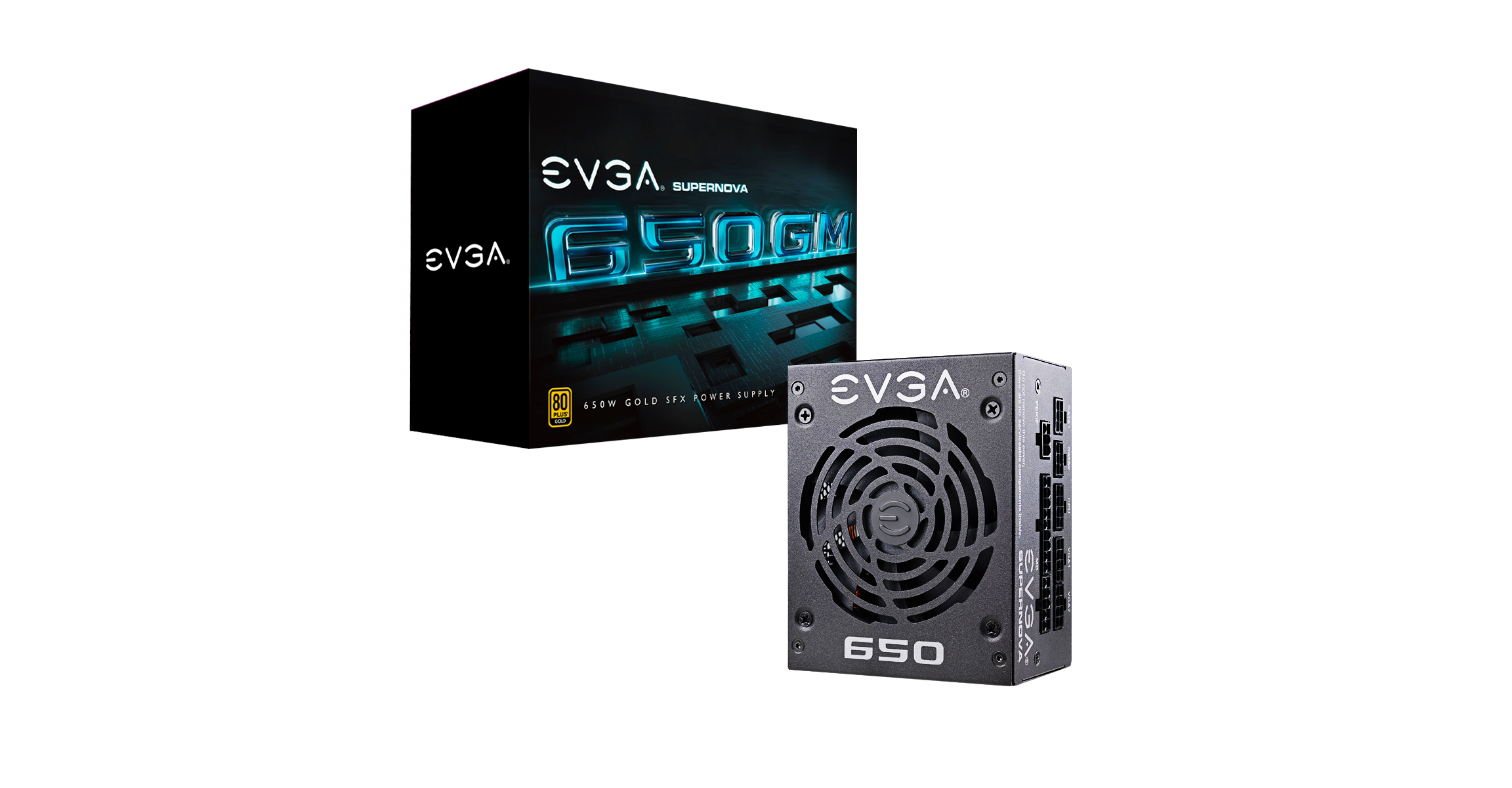