LIVA One A300 AMD Socket AM4 Mini PC Barebone Review 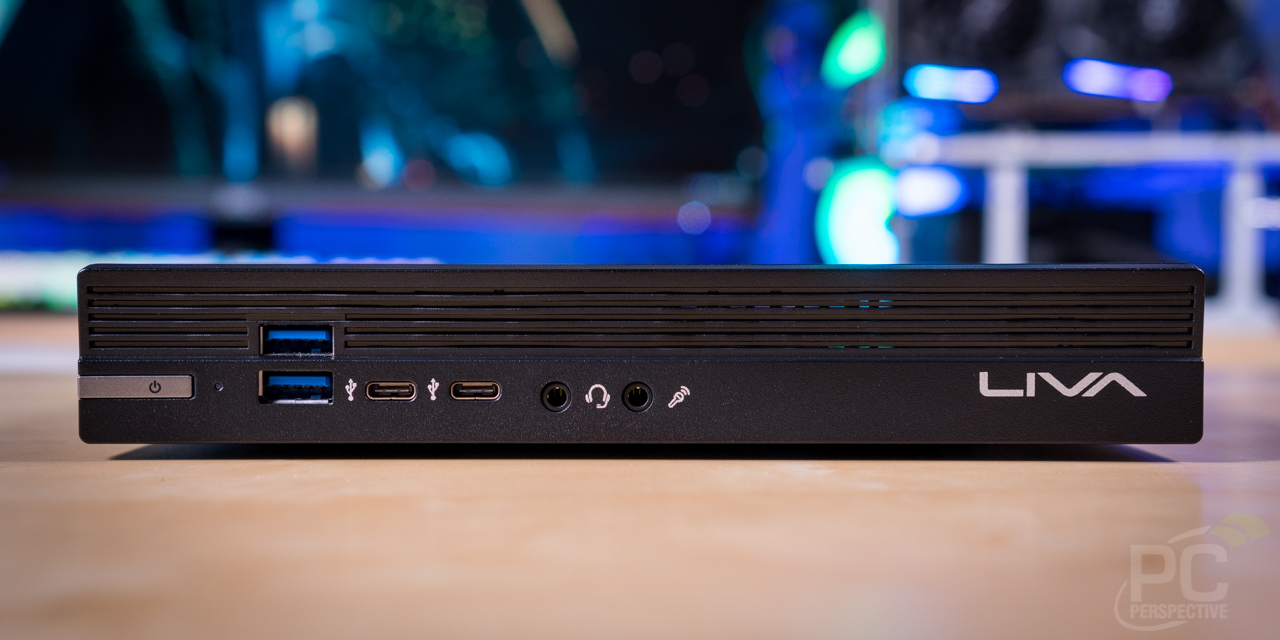 ECS sent over an AMD-powered mini-PC barebone kit for us to check out, with the LIVA One A300 offering an AM4 socket with support for up to 65W Ryzen and Athlon processors. This TDP is an important distinction, as the last one of these we looked at – the LIVA SF110-A320 – supported only 35W CPUs.

The LIVA One A300 is a kit that features a very slim enclosure, just 1.3 inches thick, and even with the added ventilation of this 65W version thermals will be a big part of the equation here. And silent PC fans (no pun intended) need not apply, as this is very much actively cooled. Let’s check it out. 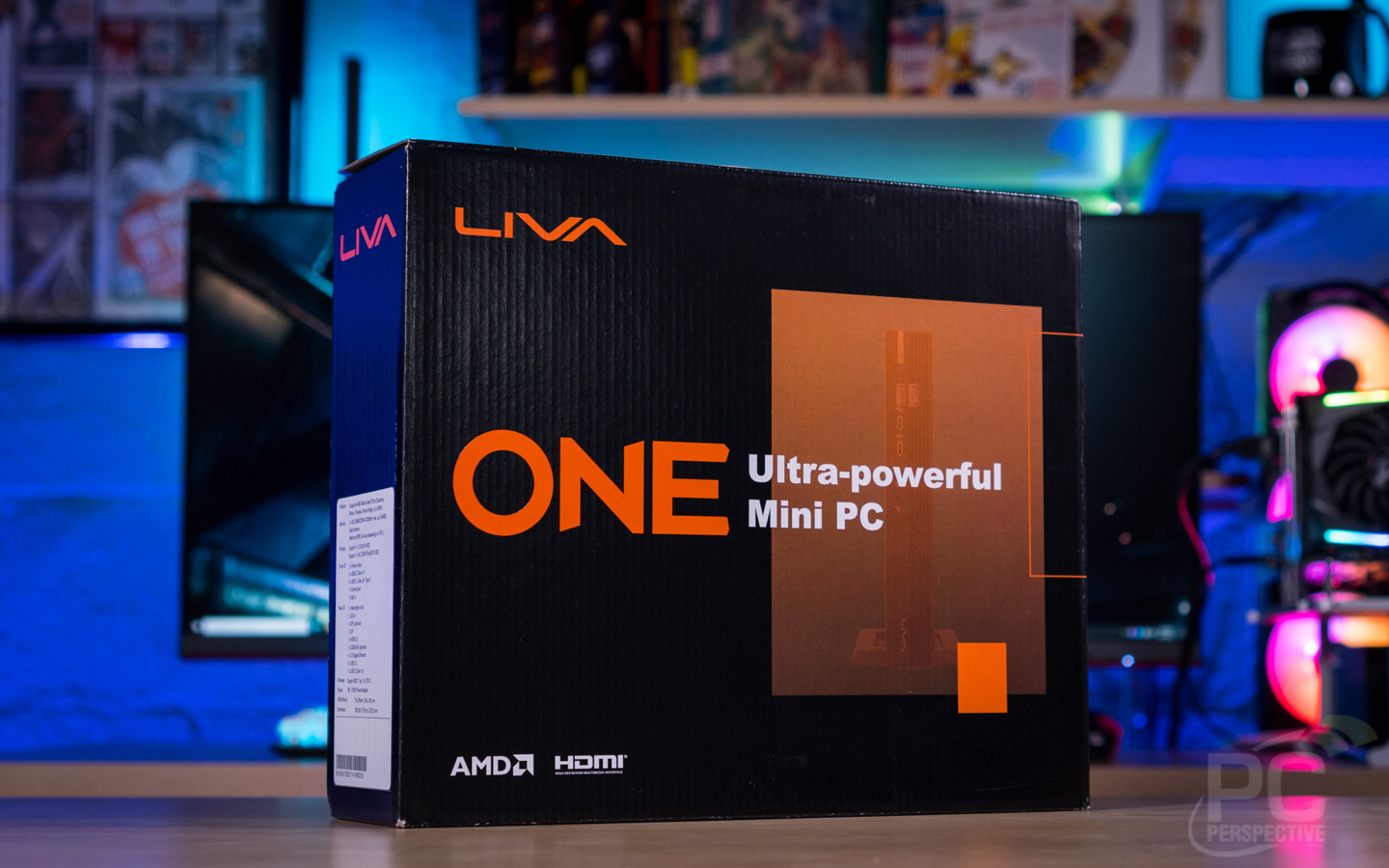 “LIVA One A300 features Socket AM4 to support AMD Ryzen & Athlon Processors. It provides exceptional performance in daily multitask computing.” 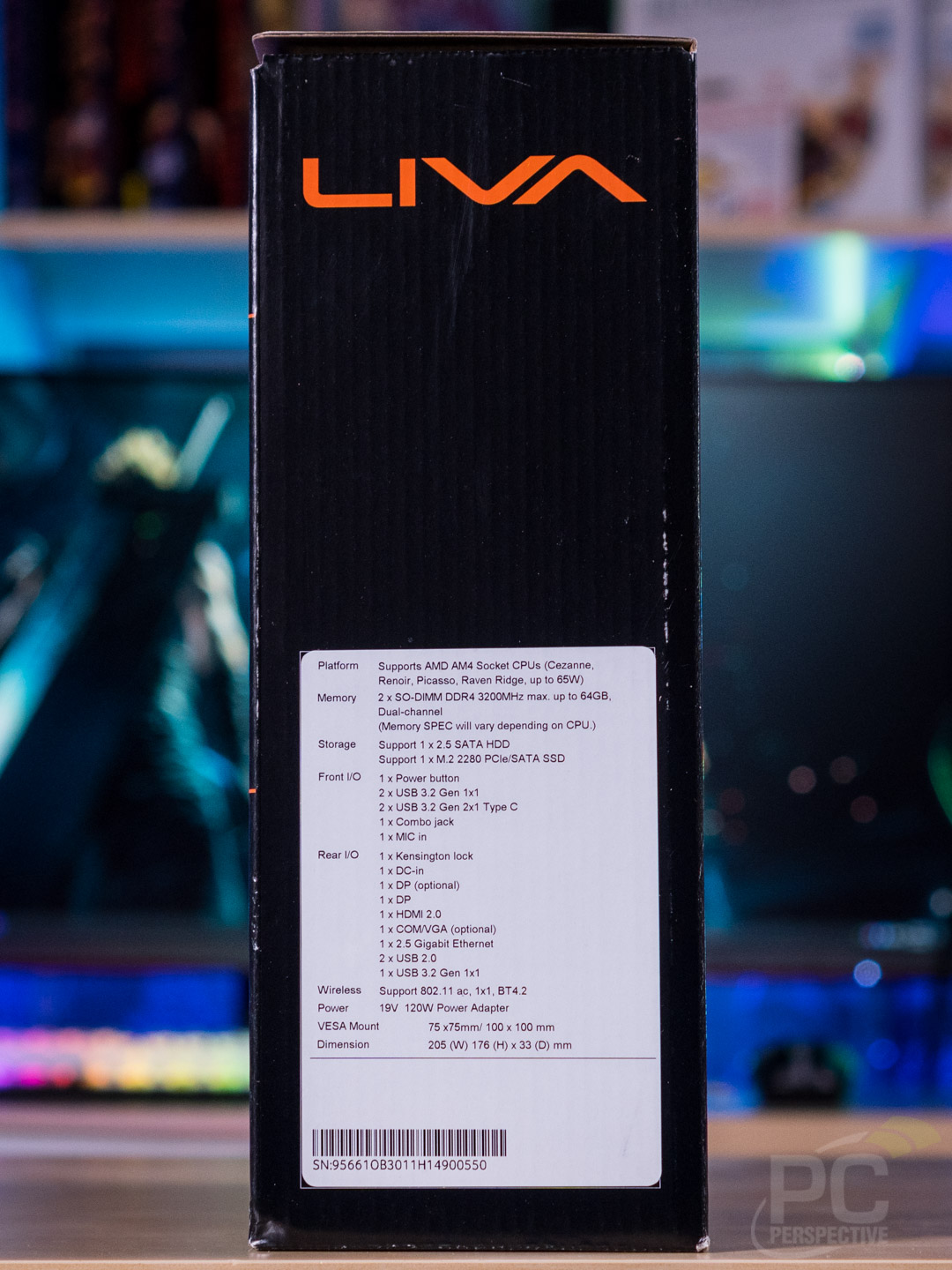 LIVA One A300 Overview 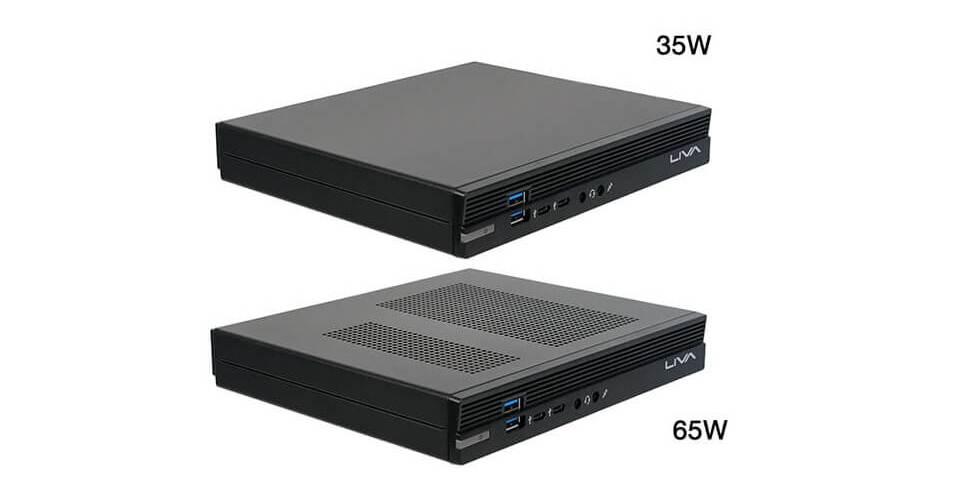 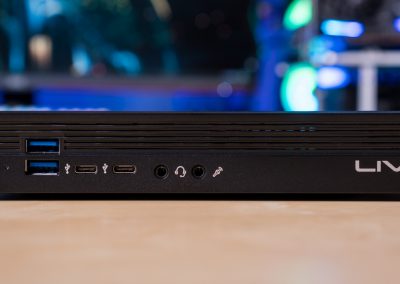 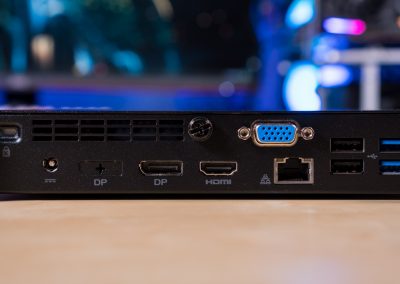 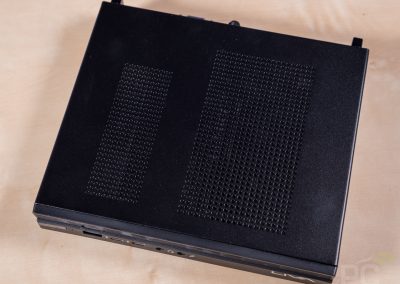 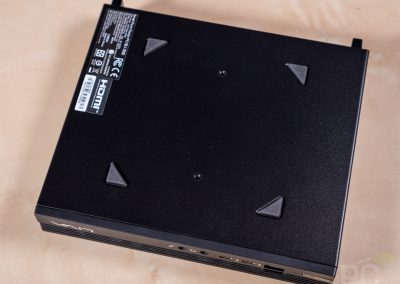 The LIVA One A300 kit includes the enclosure with pre-installed motherboard, low-profile blower style cooler, power adapter, vertical stand, and VESA mount. The power adapter is now 120W, up from the 90W of the 35W TDP version. 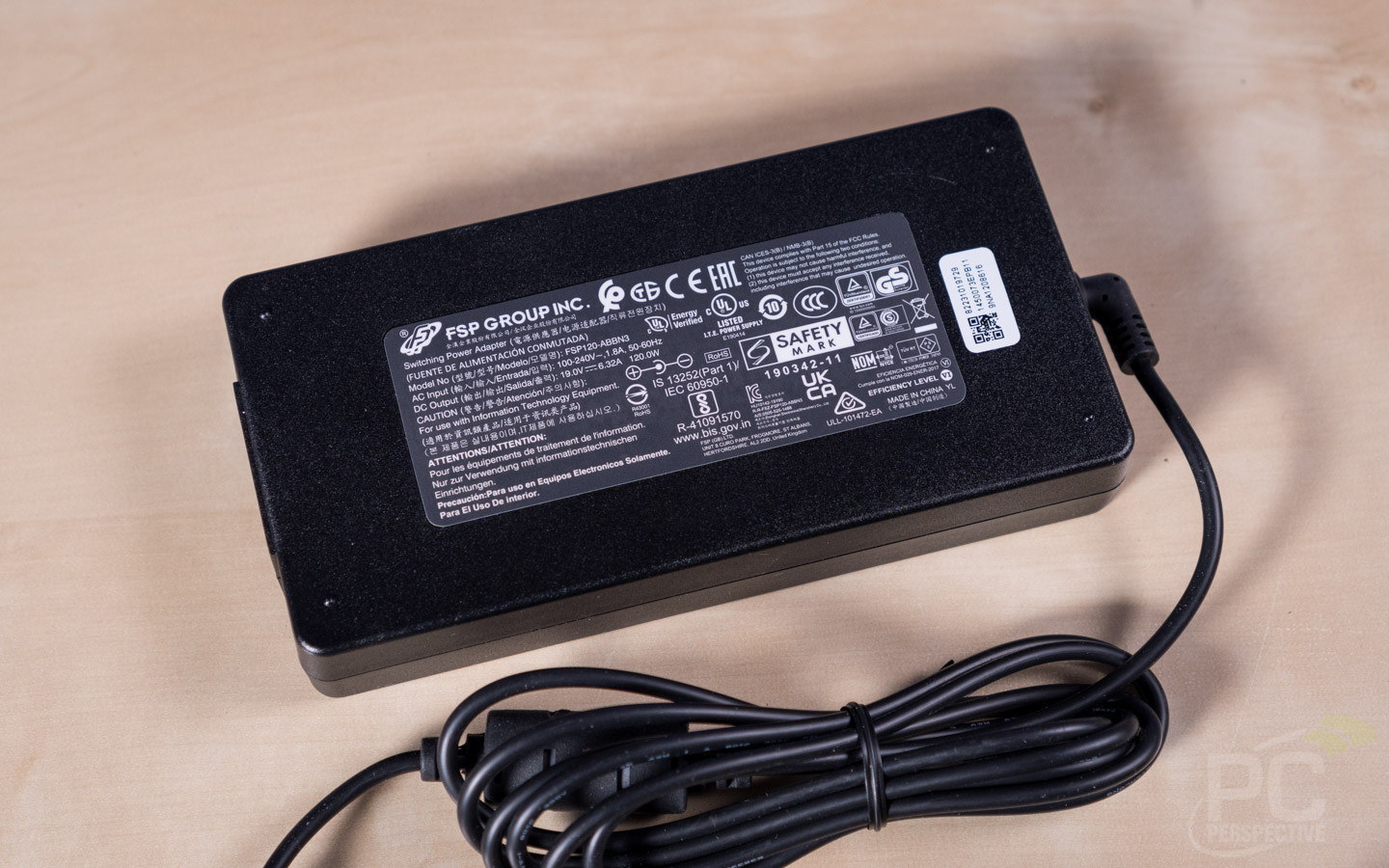 At first glance, other than the black AM4 socket and “A300-SF110” silkscreen (rather than “A320-SF110”), this board looks pretty much identical to the one found in the LIVA SF110-A320 we looked at previously, though I/O is slightly different as mentioned above. 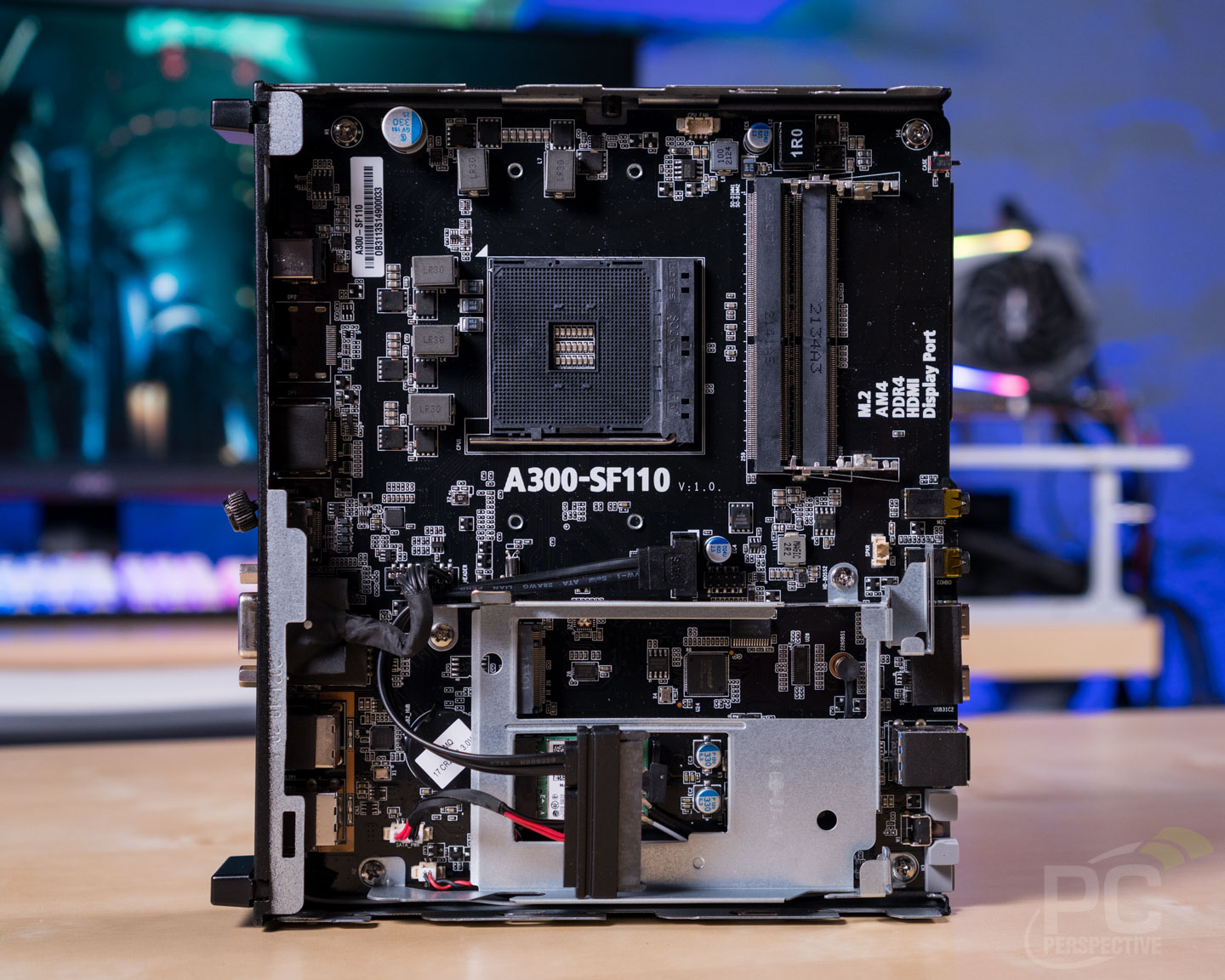 One welcome change comes just above the motherboard, as the bracket supporting 2.5-inch drives has cutouts for accessing the expansion slots beneath, whereas the previous iteration required the removal of this bracket to install an M.2 card.

As with the SF110-A320 there is a pre-installed Intel Dual Band Wireless-AC 3165 card, and I added a 480 GB Lexar NVMe SSD for testing – which clipped in without tools using a unique retention system. A plastic pin presses down securely into a matching sleeve, securing the drive without a screw. 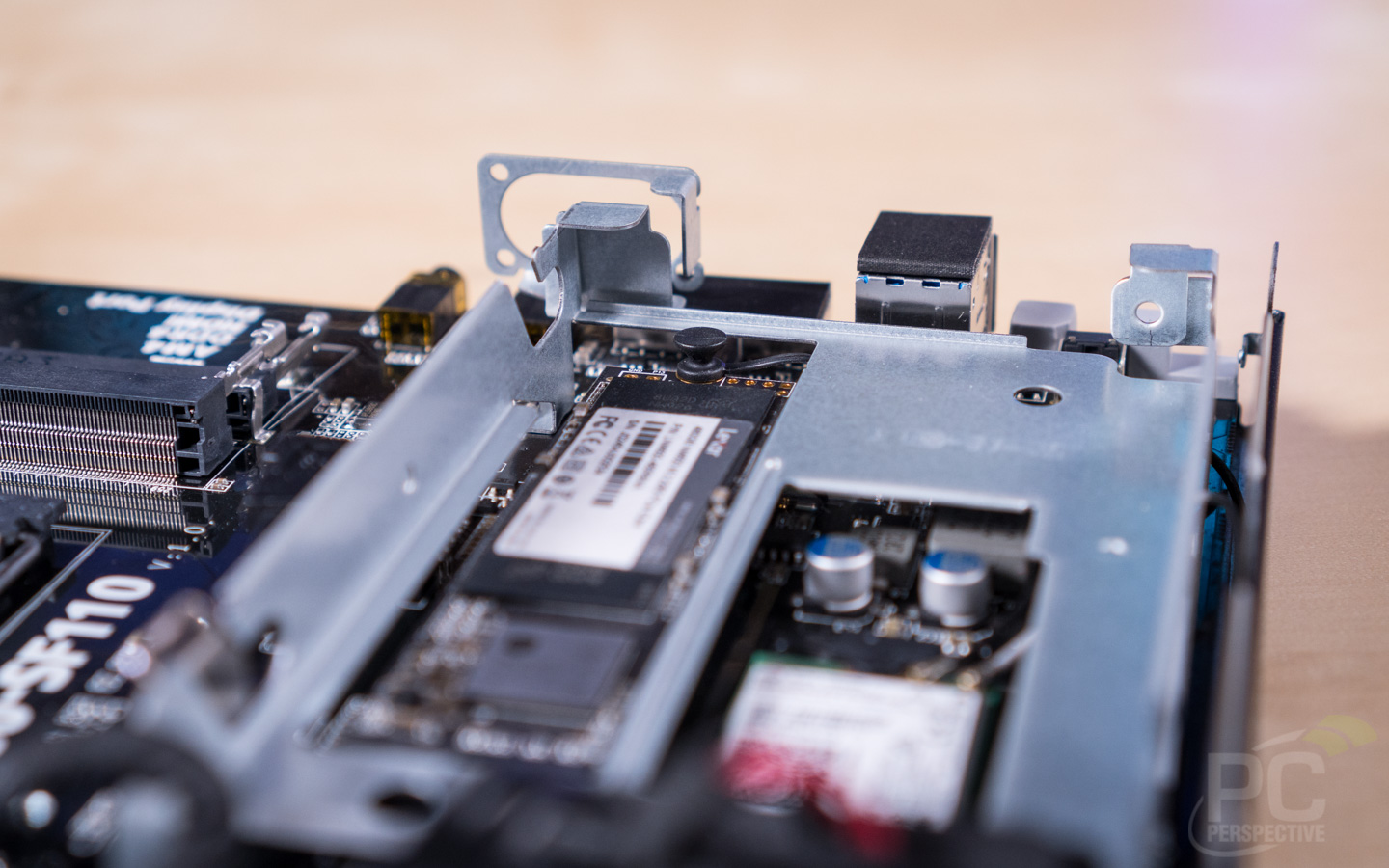 No longer limited to the rather pedestrian Athlon 3000G from the previous LIVA review, with the 65W capability of this model I installed a handy Ryzen 5 3400G APU, eventually pairing this with 16GB (2 x 8GB) of DDR4-3200 via the two SoDIMM slots. Up to 64GB is supported, according to ECS. 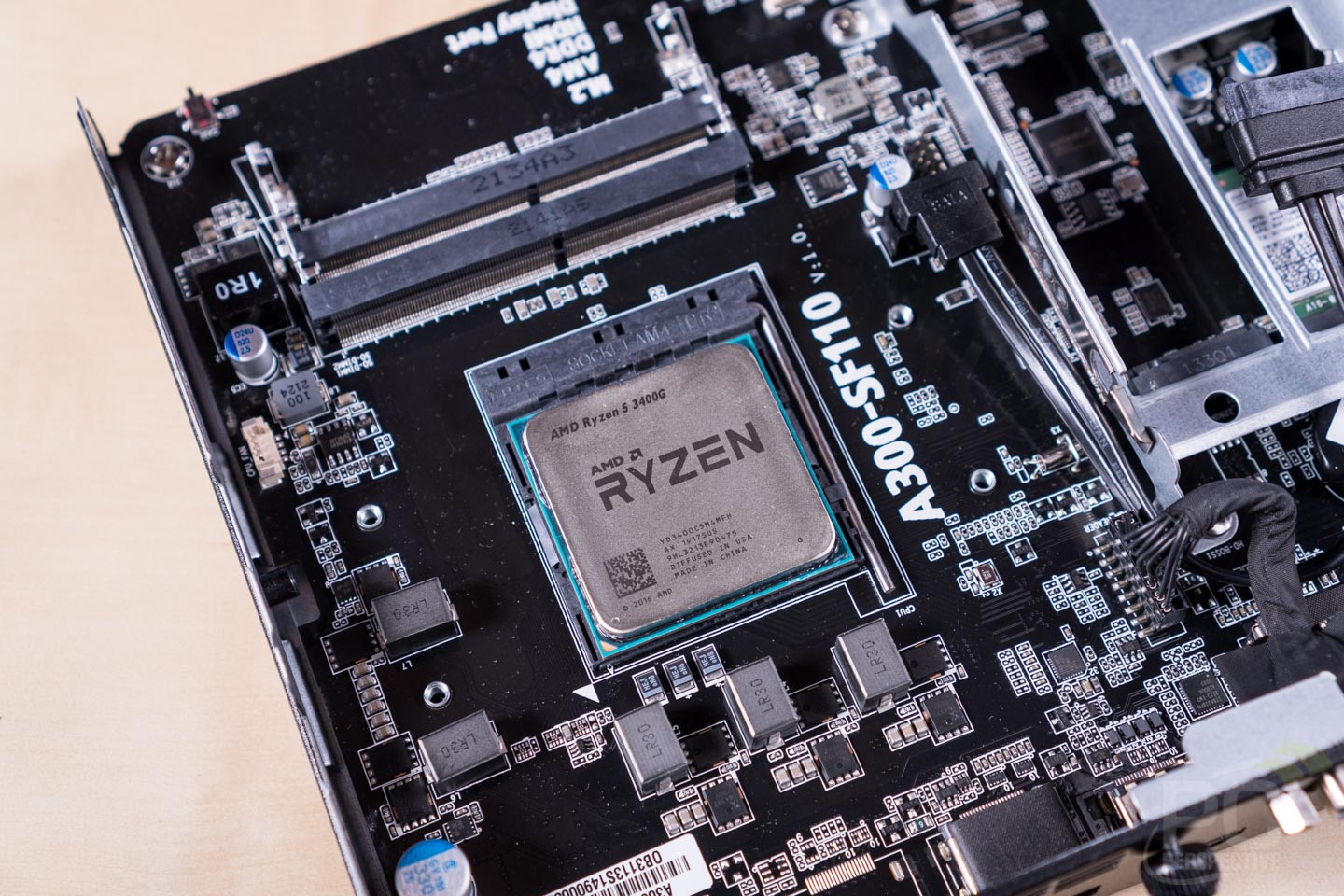 The CPU cooler is a robust one with the LIVA One A300, combining a lot more copper than we saw previously – which makes sense given the higher TDP capacity. 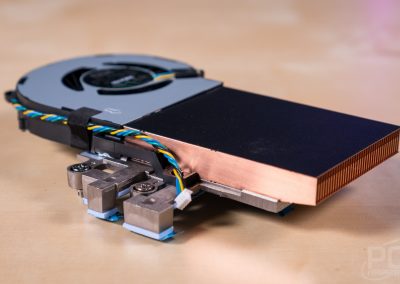 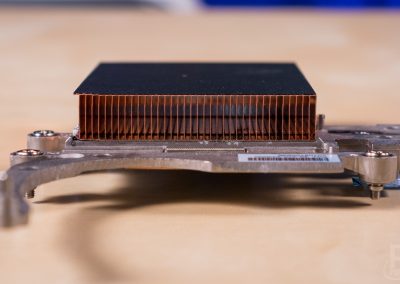 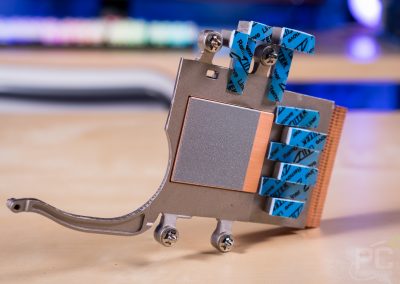 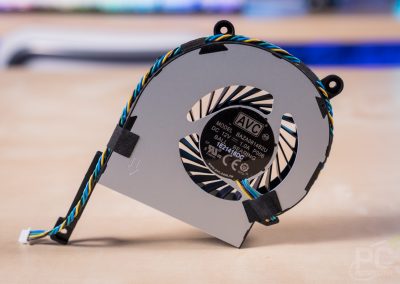 There are also contact points (with pre-attached thermal pads) for VRM cooling around the CPU, something missing from the SF110-A320’s solution. This aspect of the design should help alleviate the instability during benchmarking that I found with the earlier model. (And the ventilated chassis won’t hurt, either.)

Installation of the cooler is straightforward, as it is easily attached via four captive screws on the heatsink, and thermal paste is pre-applied. The process was identical to that of the SF110-A320 (see previous review).

I intended from the beginning to run Ubuntu Linux on this system, as I had a much better experience using that OS rather than Windows 10 on the last LIVA One I looked at. But the world runs Windows (mostly), so I tried that, first. This time, however, Windows 11 was installed. Why? In part because ECS offers virtually no driver support for Windows 10 on their download page, with full support for Windows 11 (naturally). 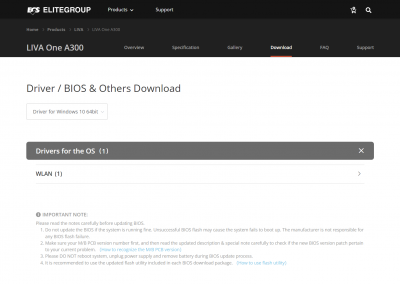 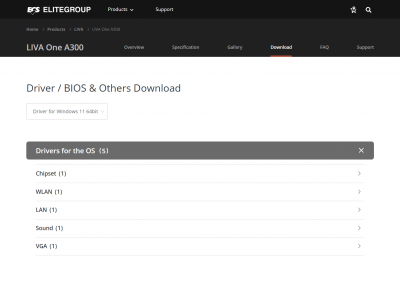 Likely the drivers I downloaded were suitable for both Windows 11 and Windows 10, and AMD fully supports this chipset and APU graphics under both operating systems (of course), but I bit the bullet and installed Win 11 anyway, just as Microsoft wanted me to (plus recent updates to rufus made me feel brave).

Things went smoothly with Windows 11 for the most part, and I was able to get some useful data during my time with Microsoft’s latest OS on this mini PC with the Ryzen 5 3400G system I came up with. 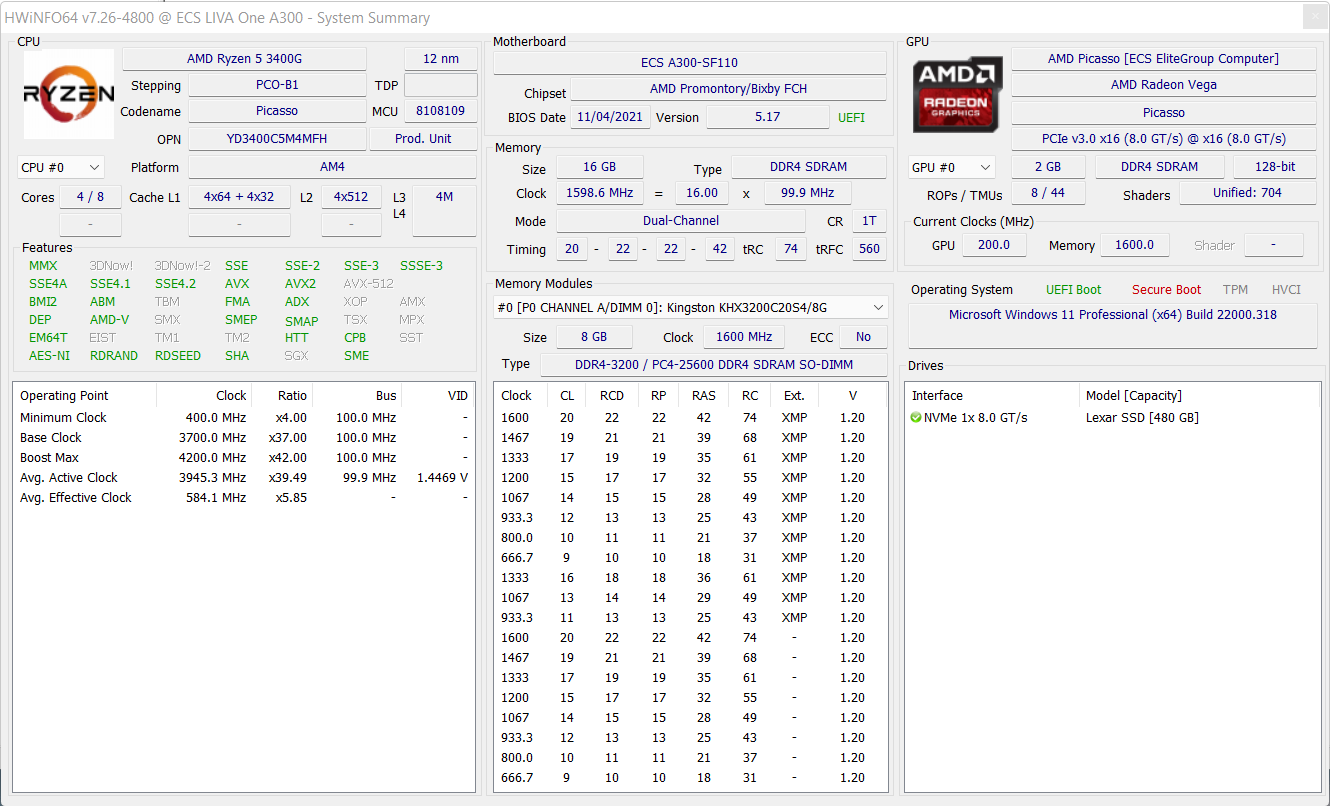 There was a refreshing lack of drama getting everything working properly, with memory the only thing requiring a bit of manual intervention to run at full speed. Upon installation the SoDIMMs I selected were detected as DDR4-2933, but I was able to set the advertised 3200 MT/s (I used auto latency settings).

One thing you may have noticed from the HWiNFO64 screenshot above: the installed NVMe drive only appears to be limited to a single PCIe lane. I thought this was a mistake at first, but no, it seems to be the actual interface speed. (More on SSD speed shortly).

As I began running some typical tests under Windows I encountered a familiar issue, though I can’t blame Windows 11. As I experienced from the earlier 35W model under Windows 10, I could not get PCMark 10 to complete a run. The system would crash.

Upon restart I witnessed the same OpenCL-related error message in PCMark that I got after attempts from the SF110-A320 / Athlon 3000G combo, so I moved on.

After completing some other benchmarks and using the system for various tasks, which resulted in data no more interesting than any other Ryzen 5 3400G content in 2022, I decided to see how the PCIe x1 limitation would affect my choice of SSD. 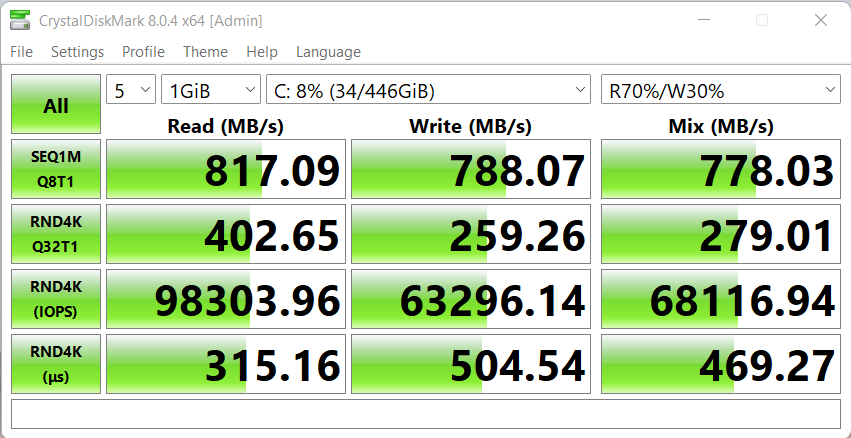 Even a single lane of PCI Express 3.0 allows for up to 1 Gbps (theoretical), which is roughly what I was seeing here – allowing for the whole MB vs. MiB conversion thing, plus overhead. Still faster than SATA, at least.

As to thermals, under the “normal” fan profile idle was 2884 RPM, with a max of 3358 RPM observed. Throughout testing (other than the above mentioned PCMark error) the system was stable and I encountered no thermal throttling from the Ryzen 5 3400G. Under normal use in a ~25 C room I never saw temps higher than the mid 60s. 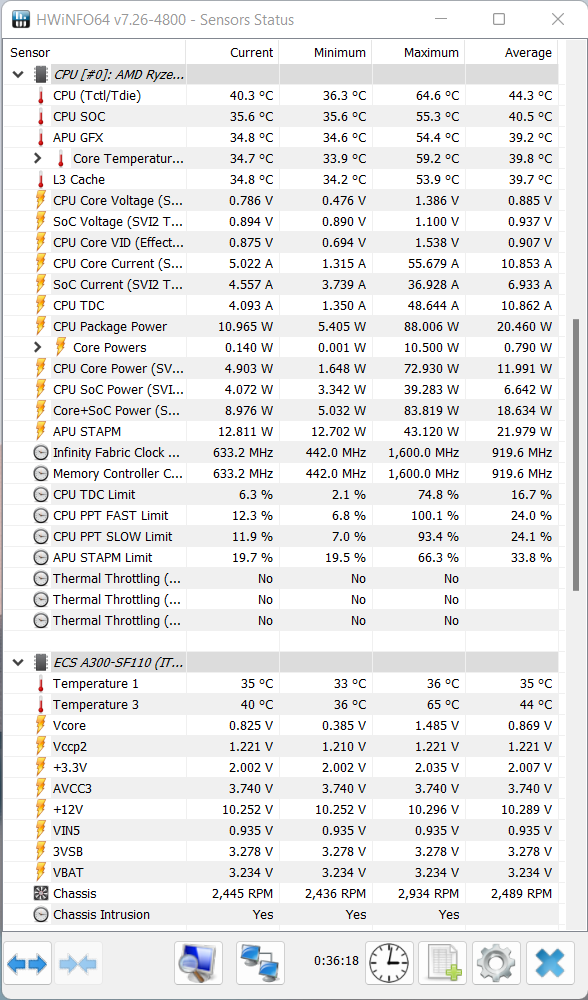 When I really pushed the issue, however, a long Blender render did push temps up into the 70s, eventually peaking at 79.6 C before a Classroom CPU cycles render was done. The fans barely ramped up during the test, however, and a more aggressive profile would have kept temps lower at the expense of some more noise.

On the subject of noise, I recorded sound pressure levels of between 32.5 dBA and 32.8 dBA at idle, rising to between 34.8 and 35.0 dBA under load. Moving the fan all the way to 100% resulted in noise levels reminiscent of a hair dryer, with 50.5 dBA recorded in this unpleasant scenario. All tests were conducted using the default “normal” fan profile in the system setup, with the SPL meter approximately 18 inches from the top of the system.

Upon completion of this limited testing I erased Windows 11 from the SSD and installed Linux. This is much better: 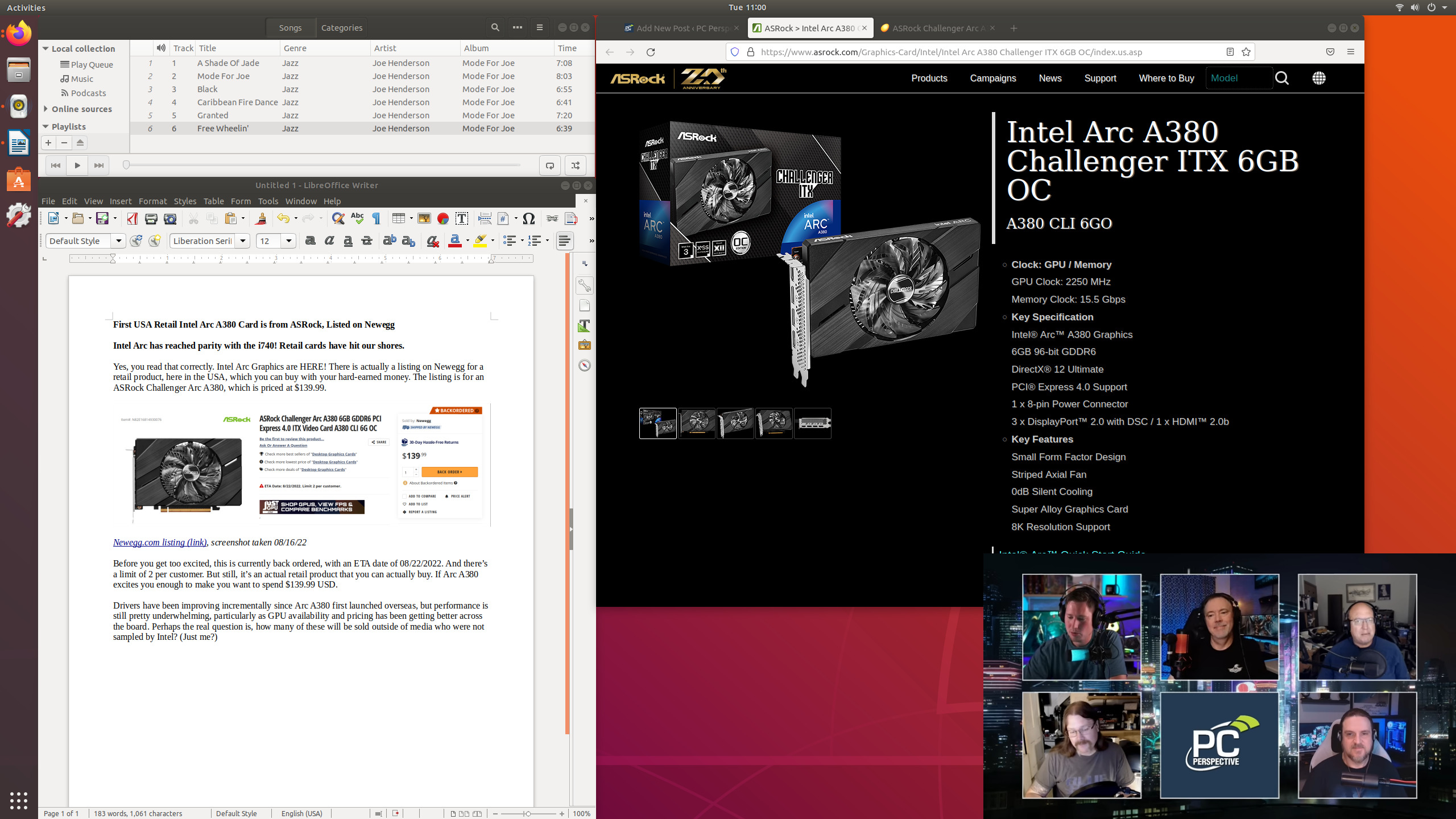 Yes, I’d just written up that news post on this very system before taking the screenshot.

Talk about a productivity machine. Not only did all of the LIVA One A300’s hardware work perfectly under Ubuntu 18.04.6 LTS, but I was reminded for the umpteenth time that I could be happy under this OS for the rest of my life. I quickly forgot I was running test hardware and got to work writing, listening to some old jazz (Joe Henderson’s Mode for Joe, 1966). I even had our latest podcast going in the corner just to push the multi-tasking aspect. No problem.

Now for the one actual issue that I experienced, under both Ubuntu and Windows 11, and it was an annoying one (at least from a noise output standpoint). No matter what I tried, waking the system from sleep would always result in 100% fan speed (around 4850 RPM), with the above mentioned 50.5 dBA noise output from this scenario, and I had to reboot the system to get it back down.

The fan speed profile is adjustable in system setup (I had this set to “normal”), but that wasn’t the issue. I tested thermals extensively under Windows 11, and observed the slow ramp from 2884 RPM up to 3358 RPM under extended load (Blender, Classroom); normally, the fan slowly ramps up under load, favoring silence at the “normal” preset. The issue was limited to a system waking from sleep.

There’s a lot to like about ECS’s book-sized mini PC, with this 65W model in particular offering a nice little platform for an APU like the Ryzen 5 3400G I tried, or one of the more modern options available on Socket AM4.

An important aspect of LIVA One A300 that I didn’t really cover was BIOS setup, which has a much improved interface and vastly better feature set compared to the SF110-A320 I reviewed previously. There’s even an “EZ Mode” rather than just text this time, making it less intimidating to beginners.

In the end the only real complaint I had from real-world use was the noise level after the system resumed from sleep, which was a very noticeable dBA. There may be an easy fix for this, but no BIOS updates are offered under the download page for this model. Maybe I missed something under CPU settings.

All told, this is a very compact little system that still manages to control thermals quite well, with average temps in the mid 40s and highs in the mid 60s C. I encountered no thermal throttling even when subjecting the system to a lengthy Blender CPU cycles render, which saw temps reach nearly 80 C (~24-25 C ambient). 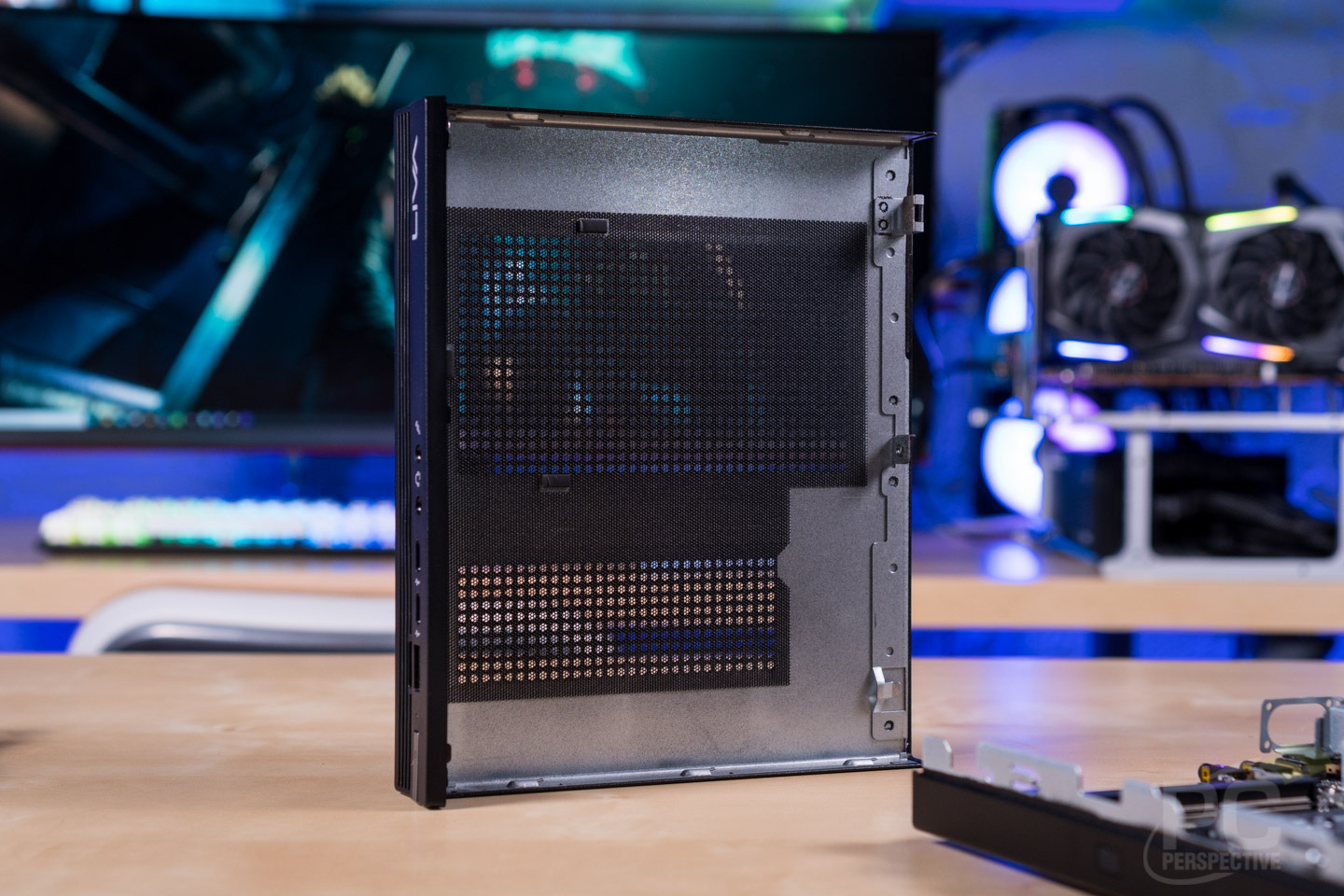 With a retail price of $196 USD (Newegg) for the complete kit, including motherboard, chassis, power supply, and thermal solution, it feels like a good deal for someone looking to build a very small AMD-powered system. The blower-style active cooling may be a turn off for some enthusiasts, but in this slender of a chassis the design is a must. Under average use the fan didn’t spin very fast, and the typical 32 – 35 dBA noise was easily masked by normal room noise.

With prices on existing Athlon and Ryzen processors quite low these days, not to mention low prices on storage and DDR4 memory, it wouldn’t take much to complete a fully equipped mini PC with this kit. And really, such builds will still have their place when AMD’s next gen CPUs launch a bit later this year, as AM4 will continue to provide a solid budget platform (for DDR4 and other reasons).

To sum up, ECS has a solid (it’s literally made of metal) option for an AM4 mini PC with the LIVA One A300 barebone kit. This SKUs support for 65W processors make it a significantly more compelling product than the 35W version, even if it does require a bit of care in placement due to the added ventilation.

The product is on loan from ECS for the purpose of this review.

The product remains the property of ECS but is on extended loan for future testing and product comparisons.

ECS had no control over the content of the review and was not consulted prior to publication.

Neither PC Perspective nor any of its staff were paid or compensated in any way by ECS for this review.

ECS has not purchased advertising at PC Perspective during the past twelve months.

CyberPower has a pre-built SandyBridge system on the market

Perhaps there is a reason to visit the Microsoft store