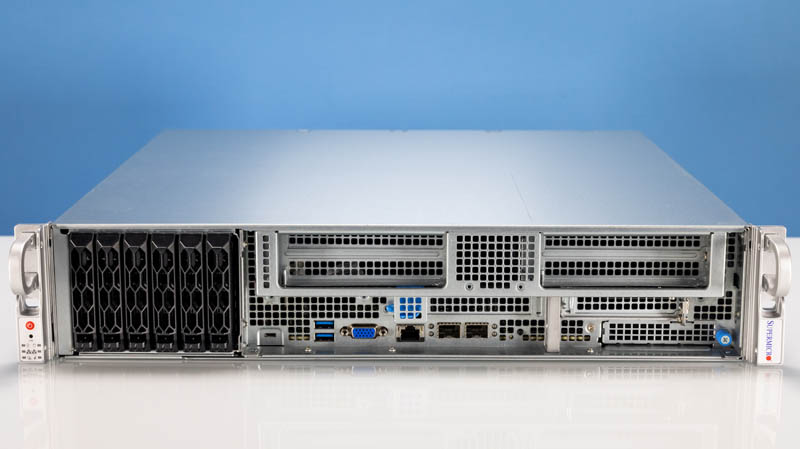 Behold The Power Of Ampere

The Supermicro ARS-210ME-FNR server is powered by the Ampere Altra Max M128-30 128-core Arm Neoverse-N1 processor.  It is designed for networking solutions for phone systems and edge devices.  It is a rather small 2U server, only 16.9″ (430mm) in depth, but still offers a fair amount of features.  There are six PCIe Gen4 NVMe SSD bays, two USB 3 ports, a VGA port, an out-of-band management port, and two SFP28 cages offering NVIDIA ConnectX-4 Lx NIC based connections.

It also has two riser ports, each with two PCIe Gen4 x16 slots wired for either x16 or x8 and should work with either GPUs or FPGAs.  The memory subsystem offers eight channels, with two DIMMs per channel and a maximum of 512GB total memory.  ServeTheHome spent quite a bit of time tearing it down for your viewing pleasure right here.

They weren’t able to run many benchmarks, but then again how does one test an edge platform for networking cards and accelerators?

This is a review we have wanted to do for ages. Namely, we can finally show you an Arm server from Supermicro. The Supermicro ARS-210ME-FNR is a 2U edge/ telco form factor that combines a short-depth chassis with the Ampere Altra Max M128-30 128-core Arm Neoverse-N1 processor.

A Sage guide to a powerful HTPC program