Where There’s One ARM There Is Usually A Second 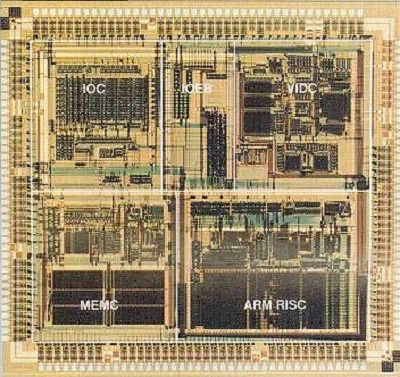 Ars Technica looked at the inception of Acorn to provide the BBC with a computer chip that could do more than any other single chip in existence in the form of the Acorn RISC Machine.  One might think that after doing so Acorn and their ARM would be on the road to greatness, sadly that was not to be the case.  In the words of one reporter after being contacted by Steve Furber to promote the ARM “I don’t believe you. If you’d been doing this, I’d have known.”

Thankfully in the ’80s, two engineers in Apple’s Advanced Technology Group, Paul Gavarini and Tom Pittard suggested using an ARM processor to replace the old Apple ][ hardware.  They built Möbius which was not only ran Apple ][ and Macintosh software on it’s emulated t6502 and 68000 CPUs, it ran everything faster.  This helped start ARM’s current business model, for at least in theory Acorn was a direct competitor of Apple.

From this came the Newton, and many, many more products.  The story is one of more interesting ones in the history of computing, so check it out if you are unfamiliar with it, or remind yourself of some of the crazy things which happened and are still happening at ARM.

The story so far: At the end of the 1980s, Acorn Computers was at a crossroads. A small team, led by Sophie Wilson and Steve Furber, had invented a powerful new computer chip, the Acorn RISC Machine (ARM). Acorn released a new computer line, the Archimedes, that used these ARM chips. But the world wasn’t beating a path to the company's door.