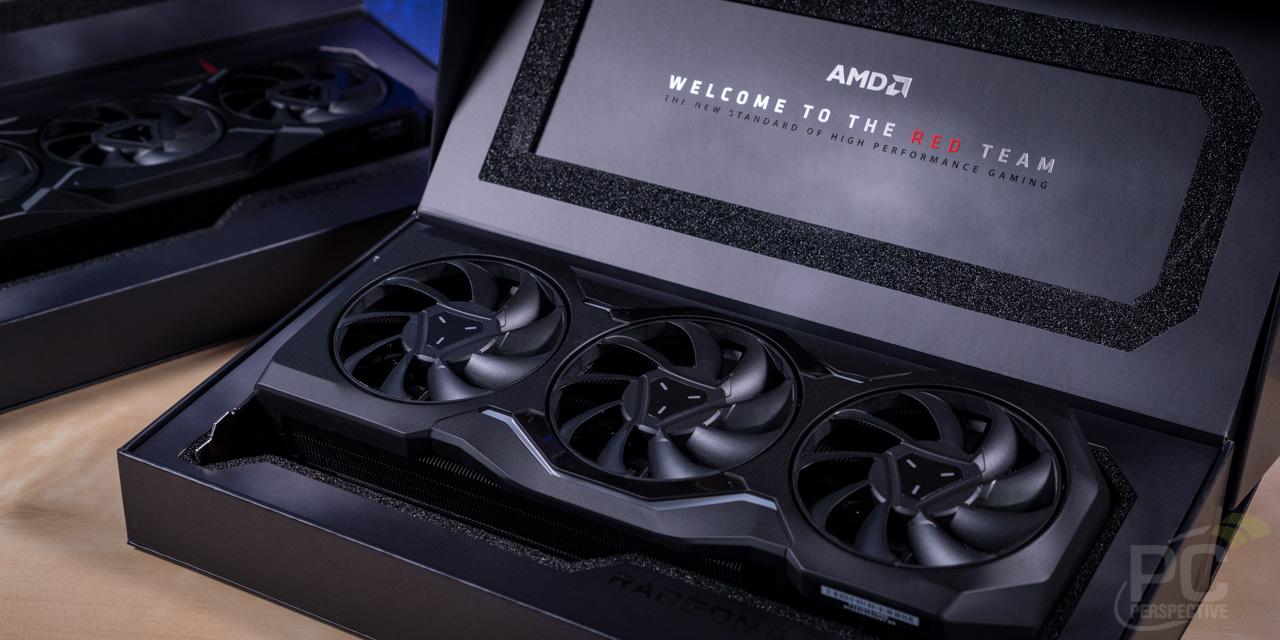 RDNA 3 is here. Does it live up to the hype?

It’s been a little over a month since I returned from AMD’s Radeon tech day in Las Vegas, where members of the media were treated to a first look at these new RDNA 3 cards, and their underlying architecture. And while performance – and pricing – are the keys to this launch, it is nonetheless important as the first chiplet design in a consumer GPU.

Pricing aside, AMD has a full-fledged competitor to NVIDIA’s high-end enthusiast card, and depending on performance it could even force a price drop from the green team. But there is the matter of the GeForce RTX 4090, which is (spoiler alert) in no danger of being dethroned today. 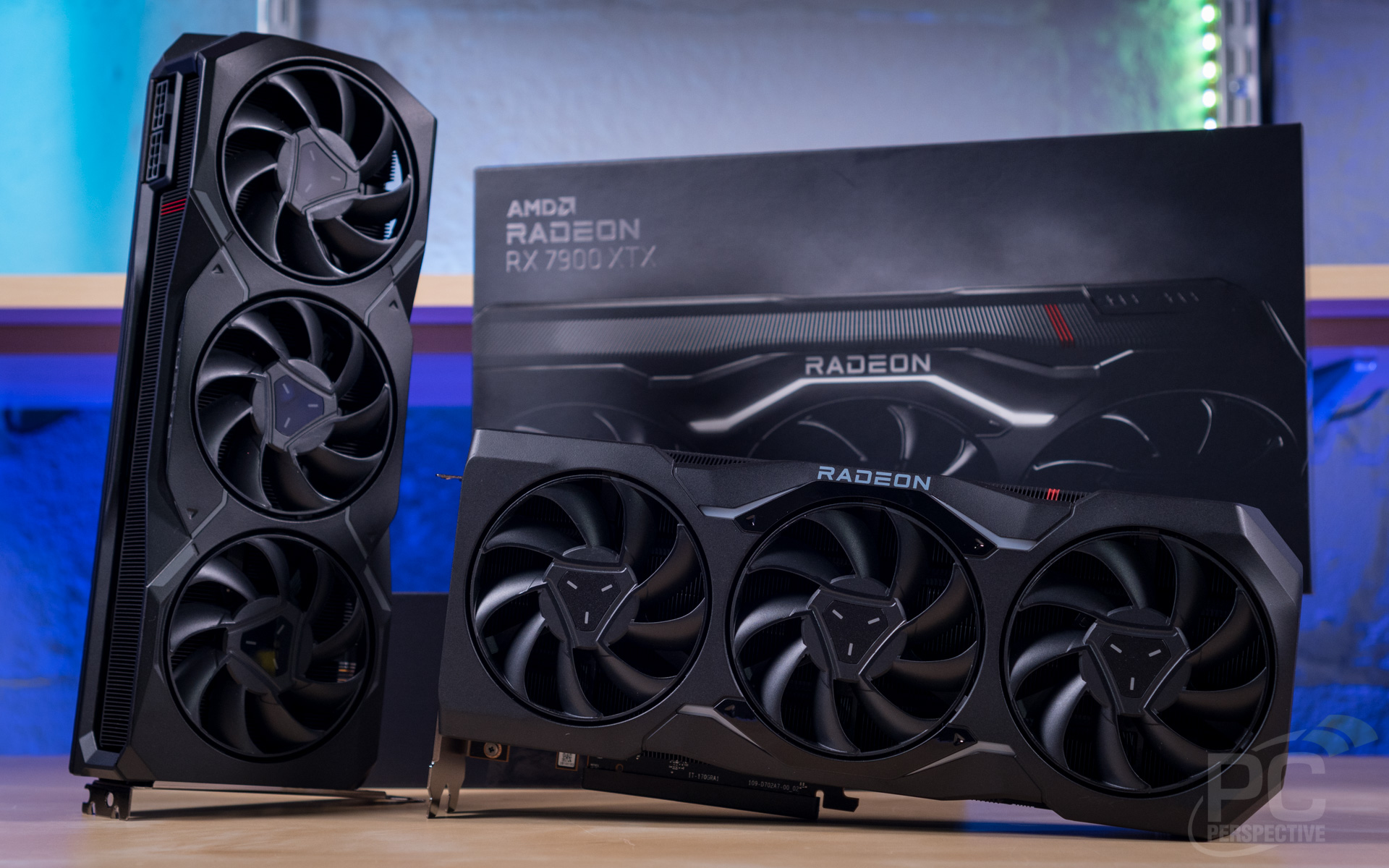 We could talk about pricing, product segmentation, competition, and marketing all day, but this launch is all about the new hardware. In the interest of getting on with it, here is a look at the specs for these new RX 7900 Series cards, with the previous-gen RX 6900 Series cards added for reference in this lovely table:

There has been a significant improvement in memory bandwidth with these RX 7900 cards compared to the previous generation, with the flagship RX 7900 XTX nearing the 1 TB/s mark at 960 GB/s. This is thanks in part to the move to 20 Gbps GDDR6 memory, but crucially the interface is wider now at 384-bit from the 7900 XTX, and 320-bit from the 7900 XT. 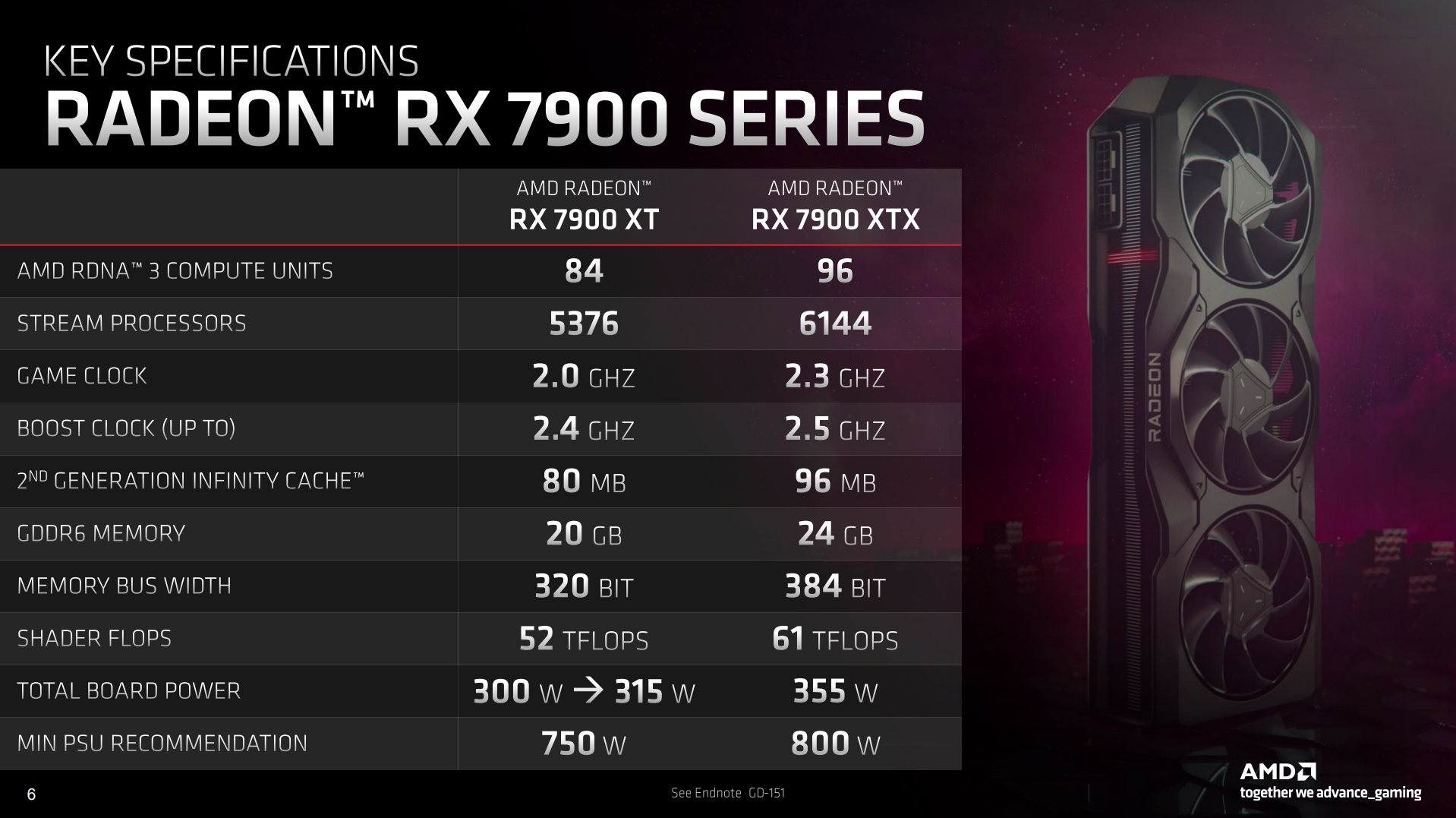 The specs are good, but not as good as some of the rumors – or alleged “leaks” – would have had you believe. It’s nothing new to have to navigate hype and misinformation leading up to a major product launch, but in the TechTuber era it is as pervasive as ever (even Team Red favorite Moore’s Law is Dead (YouTube, timestamped) was not immune, listing a massive amount of Infinity Cache, multiple GPU compute dies, and 3D stacking in one “leak” alone).

Speaking of rumored specs, you may have heard of some very high clock speeds, up in the 3 GHz region, which didn’t end up happening. This was obviously not just a rumor, as even AMD says RDNA 3 is “architected to exceed 3 GHz”. 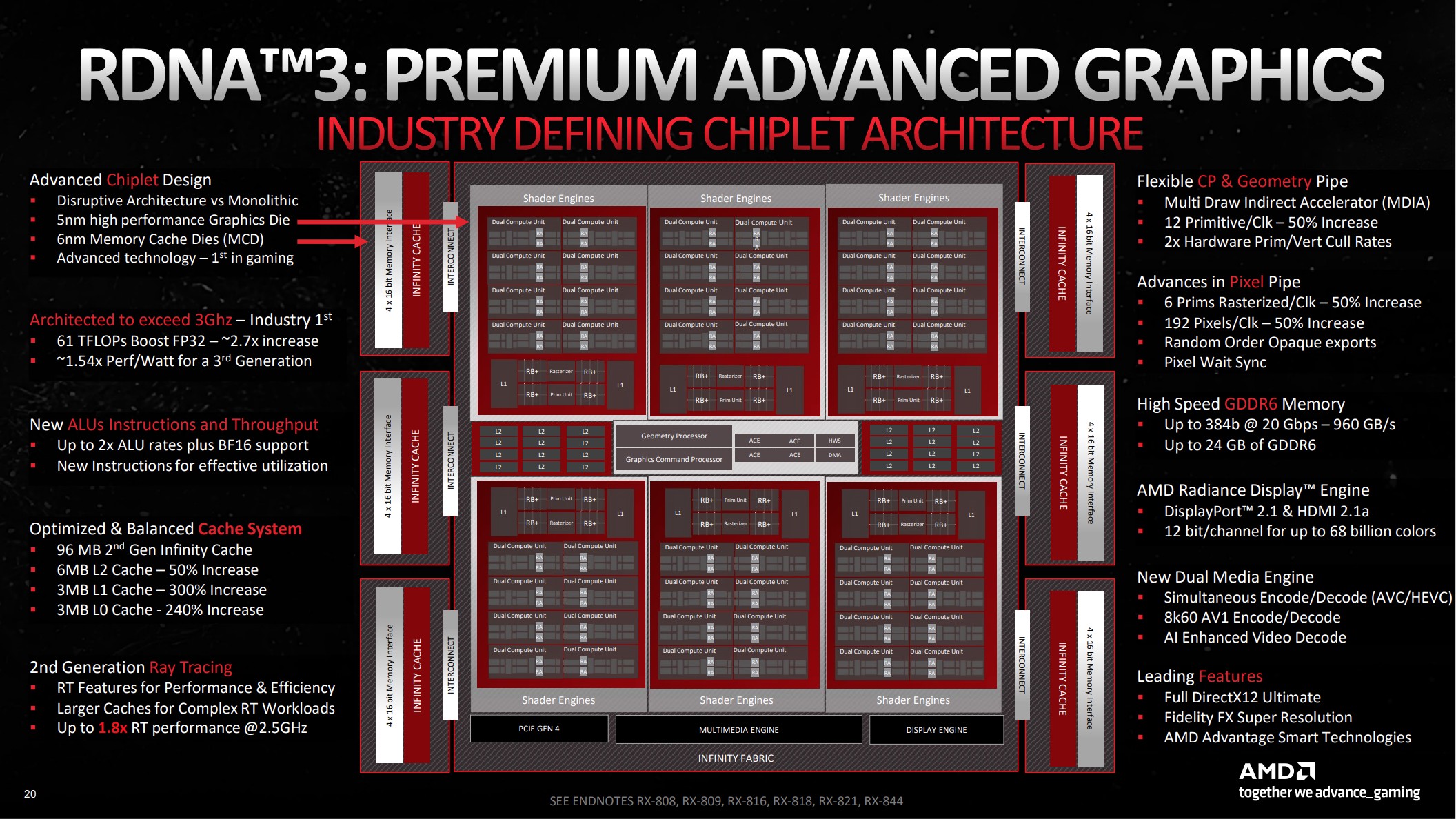 The text may be small, but there’s a lot of good info in the above slide.

AMD has gone with a stealthy matte black look to their shroud design this generation, and while I really liked the RX 6000 Series reference cooler, I understand the appeal of this understated design language. 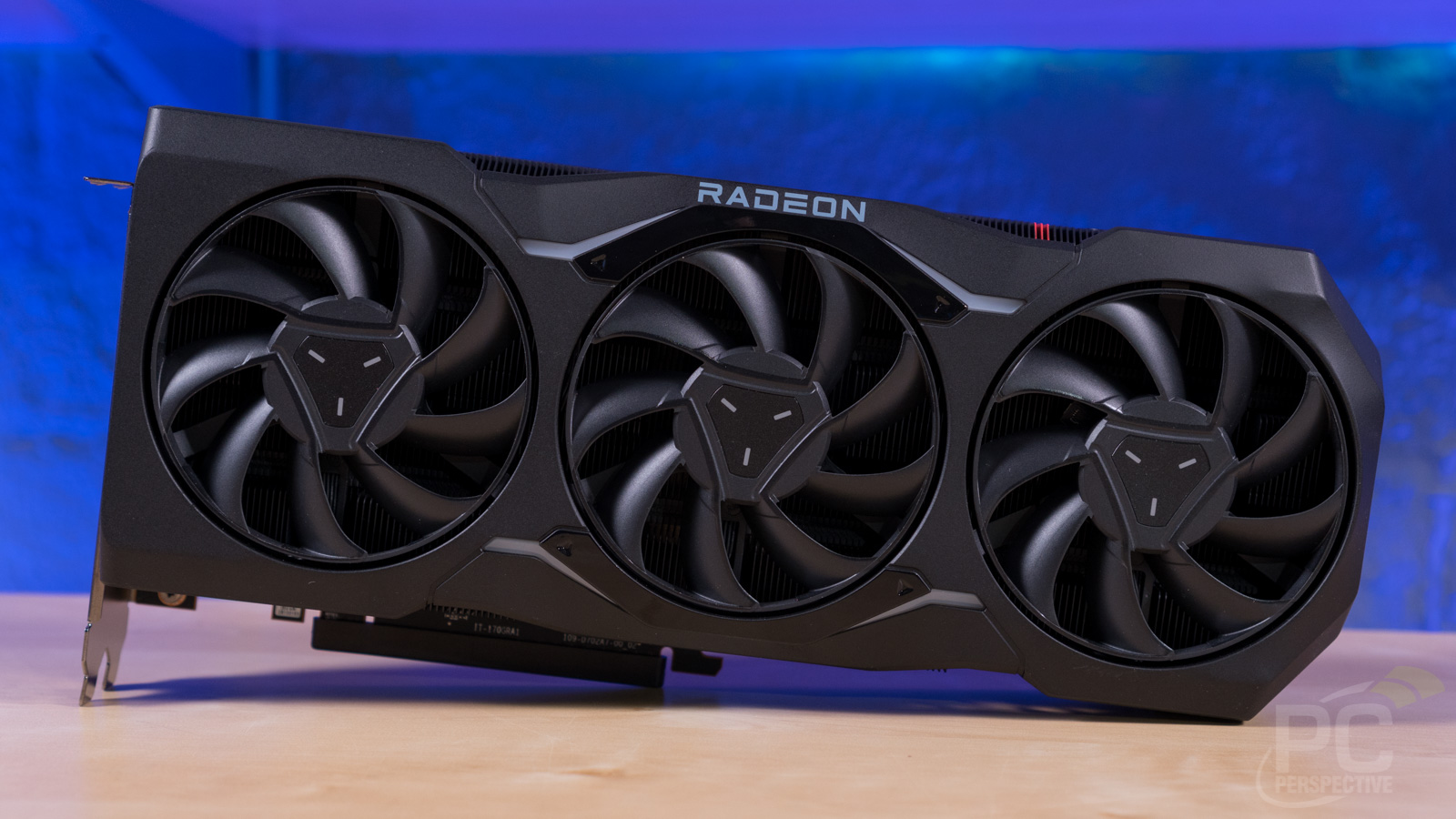 These are again triple-fan designs that occupy a bit over two slots in width, and should fit just about anywhere that the previous generation AMD cards did – right down to the dual 8-pin power connectors. 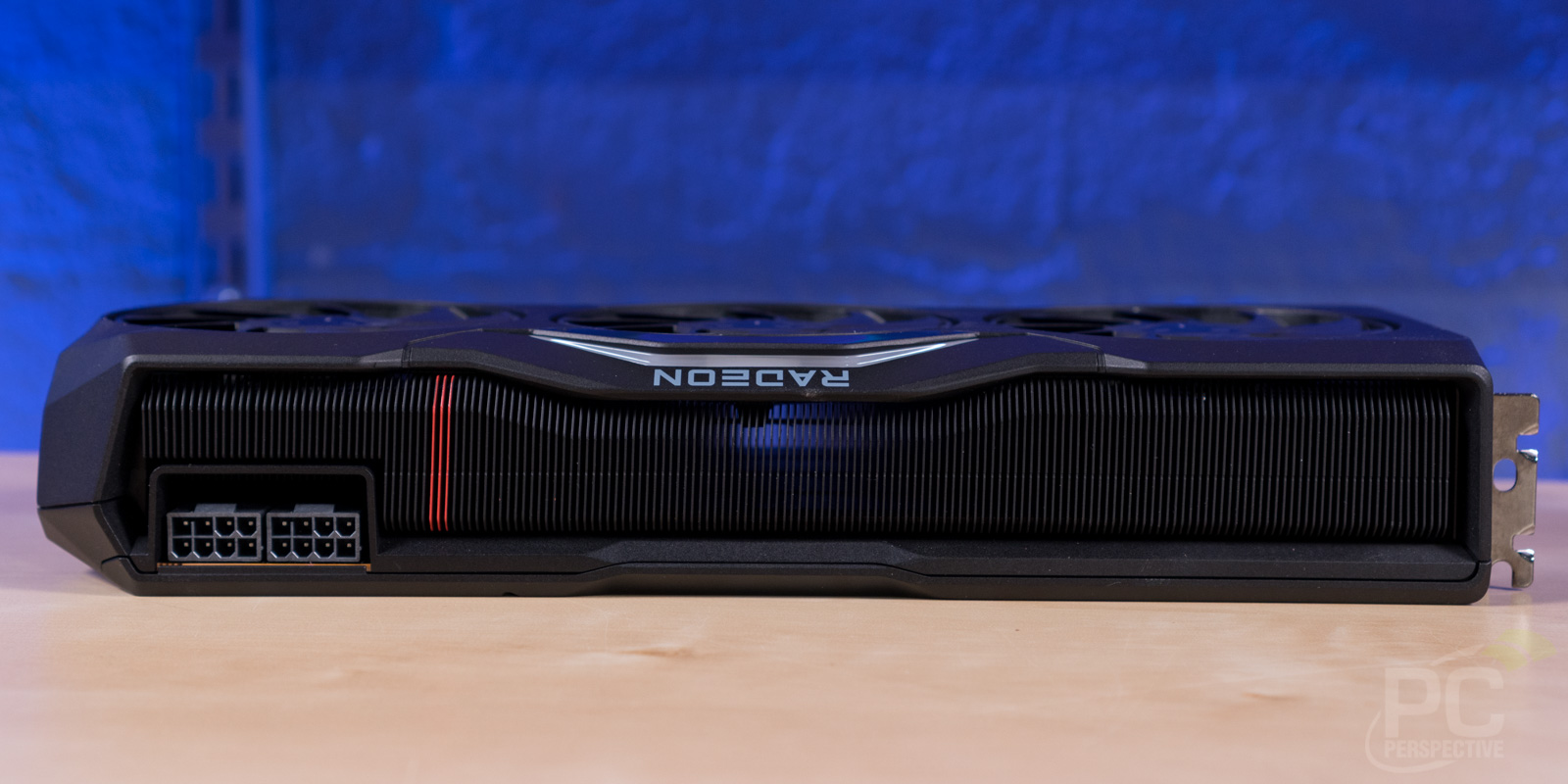 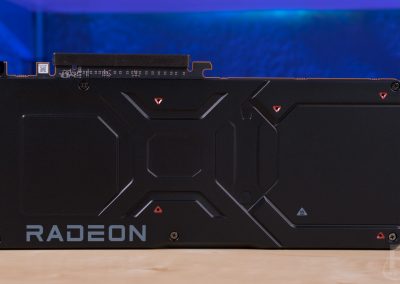 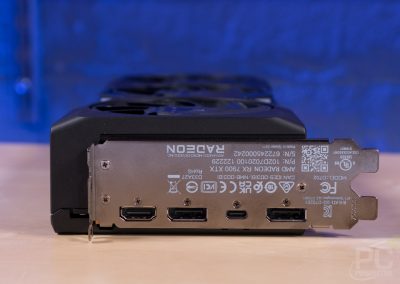 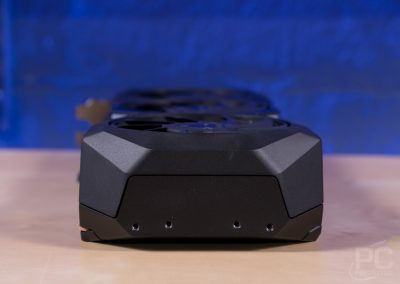 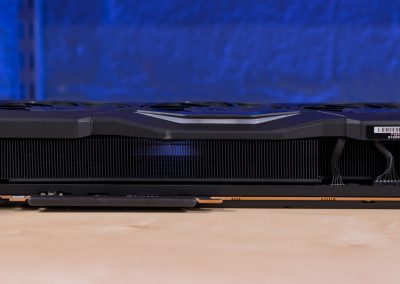 We have been looking just at the RX 7900 XTX card so far in these photos, but the only notable difference between the two cards is obvious only when you view them side-by-side: 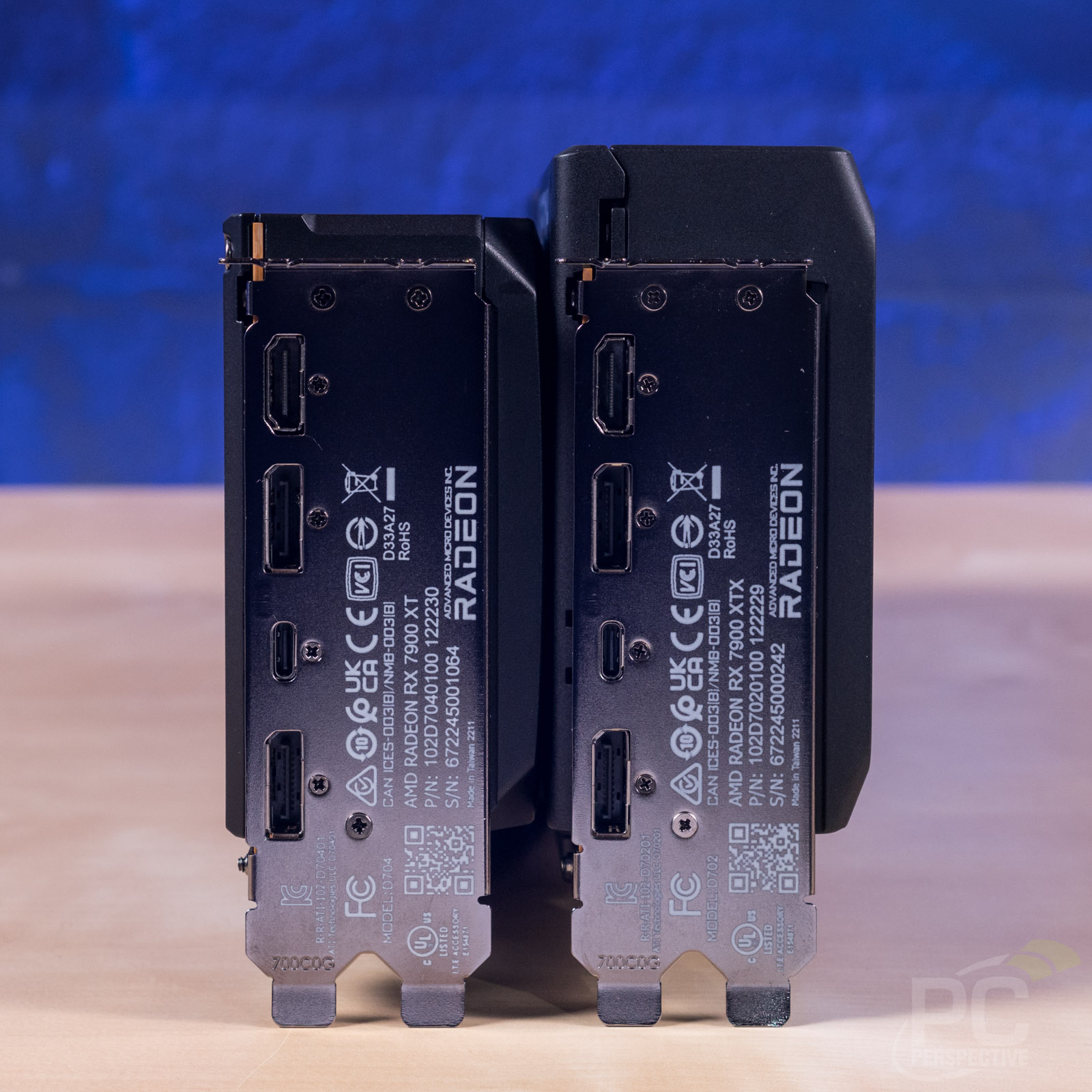 We are getting a Radeon 6950 XT, but didn’t have it in time for this review. For the time being I have simply added the Radeon RX 7900 cards to the results from our latest NVIDIA reviews, which will allow for a comparison to the GeForce RTX 4080 targeted by AMD with this launch.

First, a look at synthetics. We will look at results from three different 3DMark tests, starting with Time Spy Extreme: 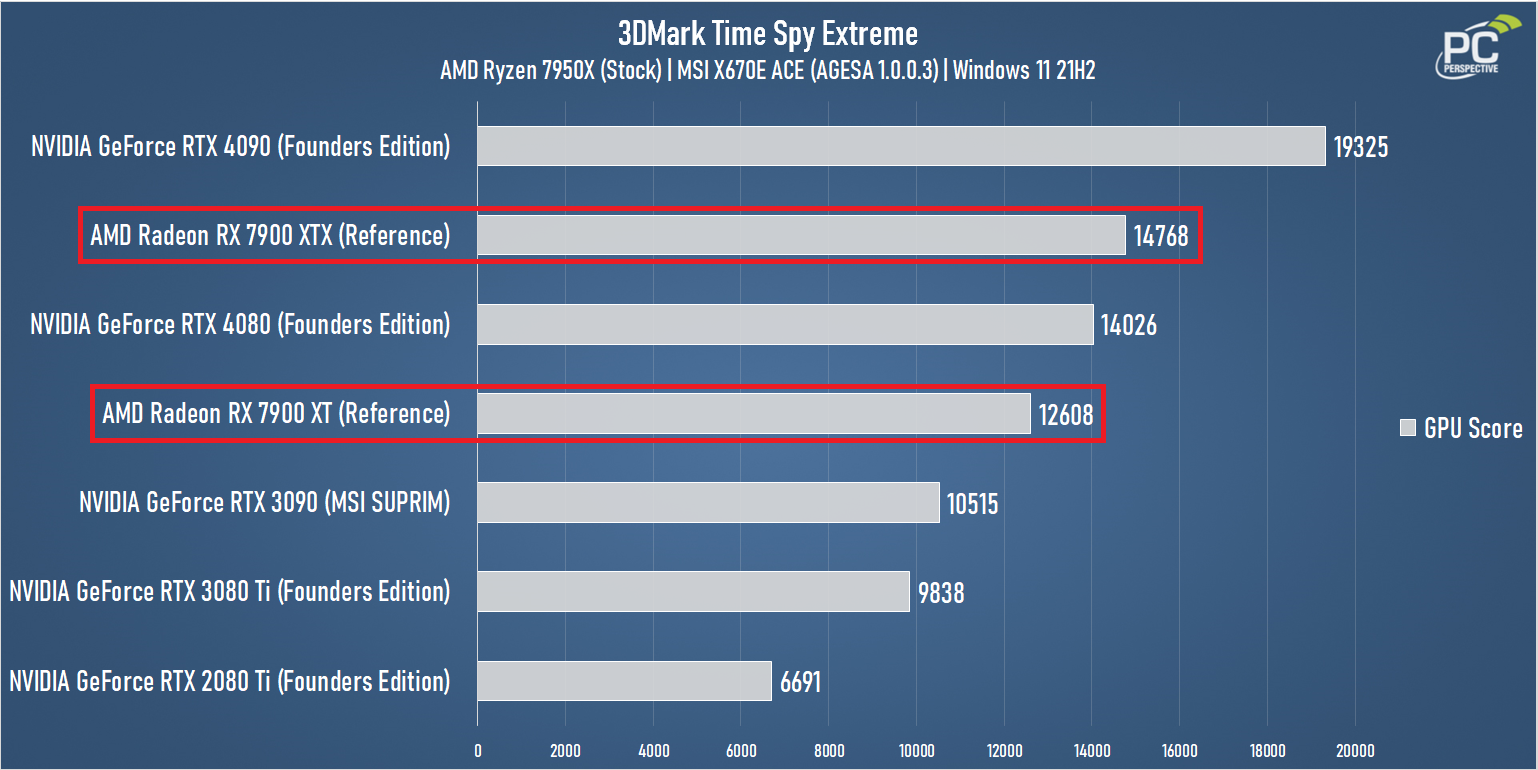 Raster performance from the Radeon RX 7900 XTX is faster than the GeForce RTX 4080 in this test (and in other tests to follow), but when ray tracing is involved (obviously we are just comparing DXR), the RTX 4080 card is quite a bit faster: 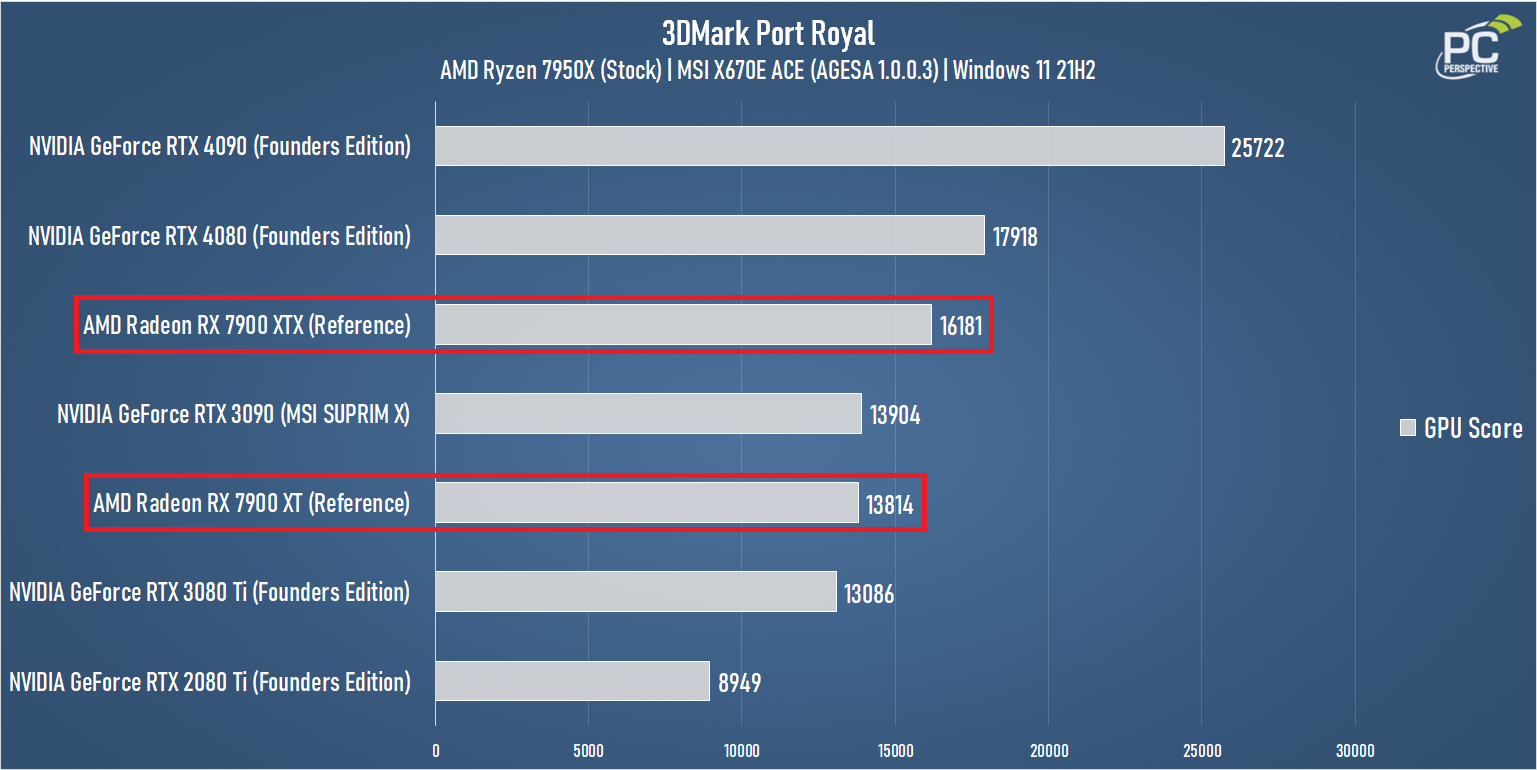 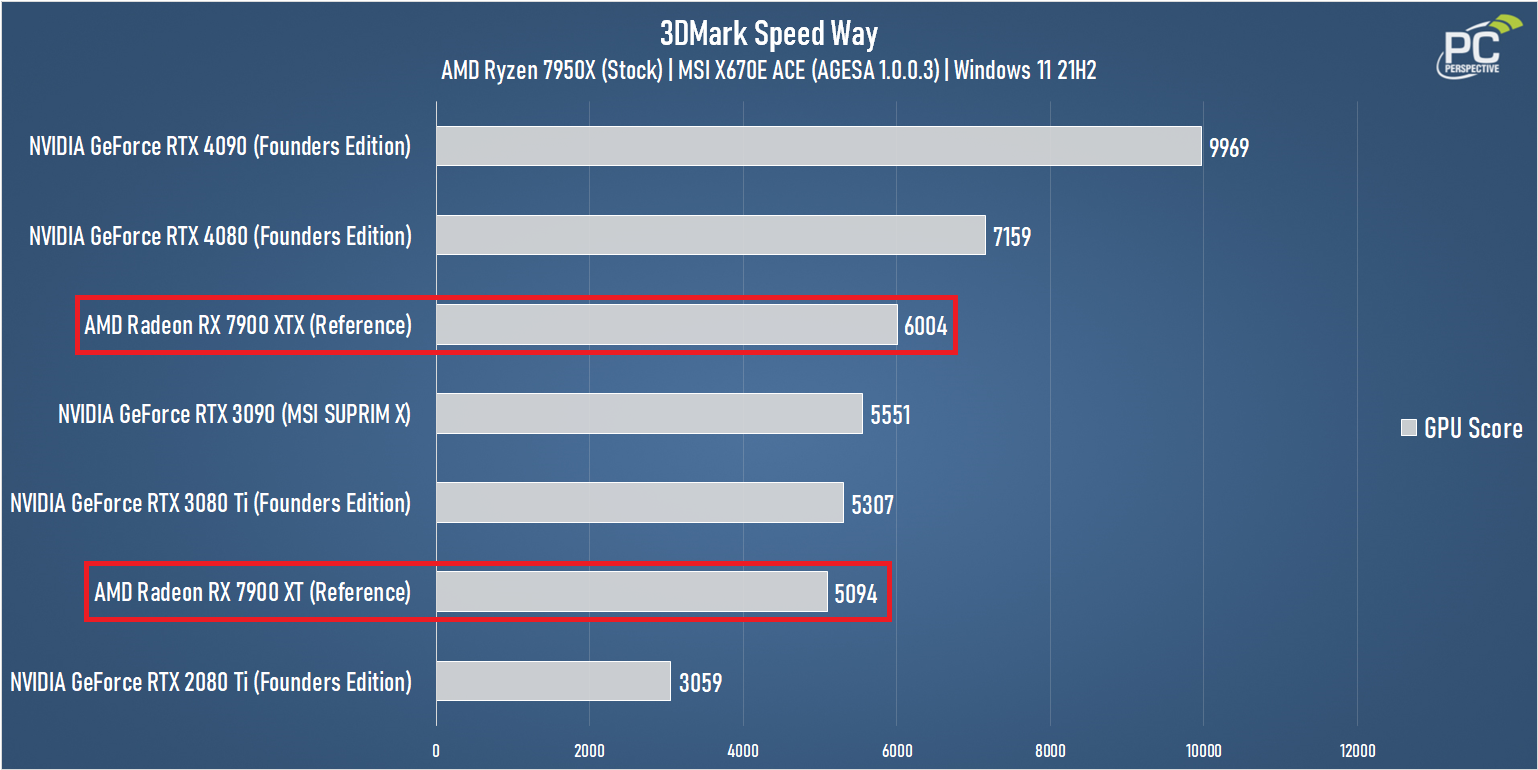 Again, we are in RTX 3090 Ti territory (estimated, as we only have an RTX 3090 to test) for RT performance, but again quite a bit behind the RTX 4080 in the demanding DirectX 12 Ultimate Speed Way test.

Next we will look at a few game benchmarks. 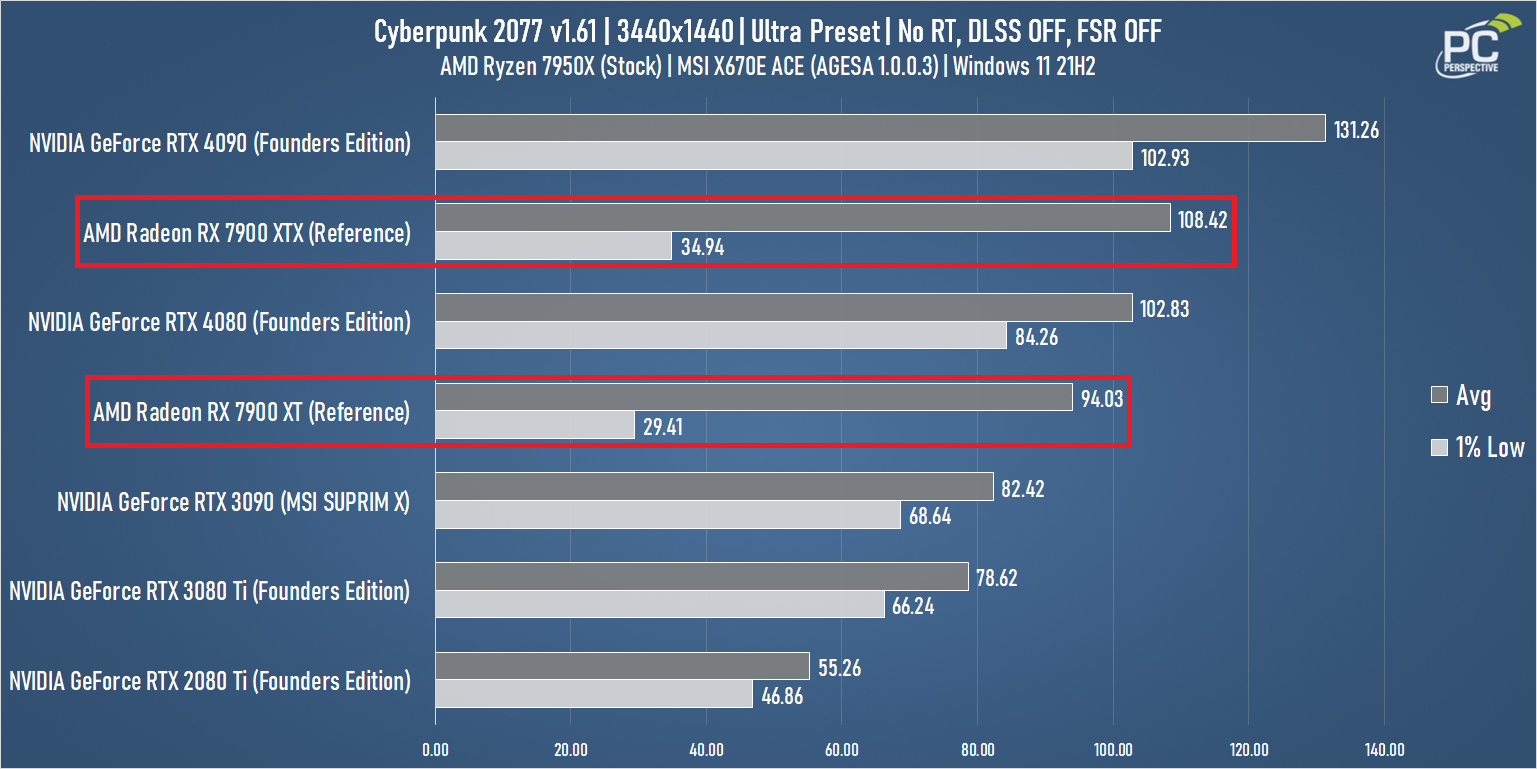 At first Cyberpunk 2077 looks like a win for the RX 7900 XTX over the RTX 4080, but the 1% lows are … bad. Drivers are very early at this point, of course, and this is likely to improve. Let’s see if an AMD-optimized title is any better in that department. 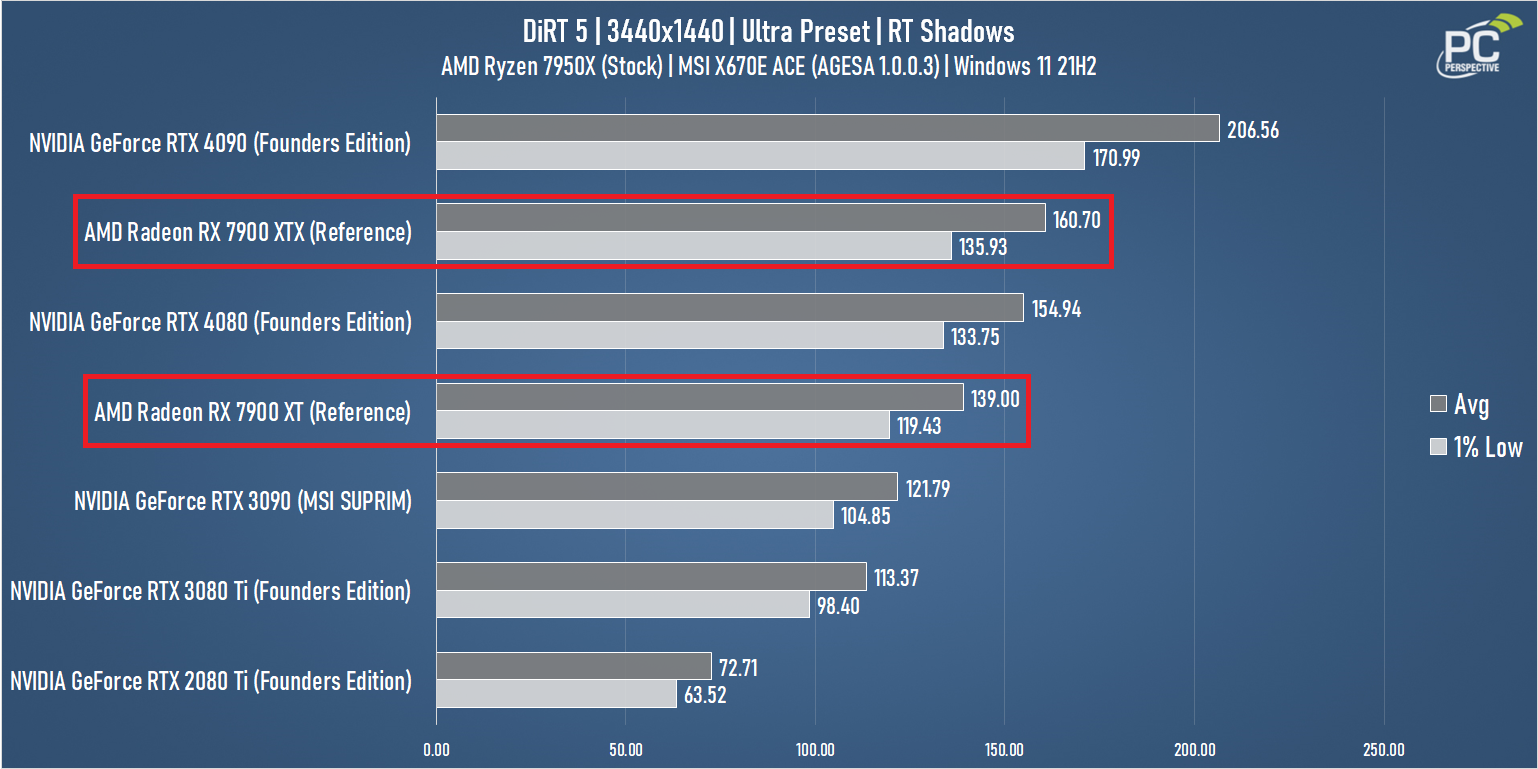 This time the RX 7900 XTX has faster average frame rates, and none of the frametime issues we saw with Cyberpunk.

And now, because I’d already tested it with all of the NVIDIA cards recently, here’s Metro Exodus Enhanced Edition. This will be a worst-case scenario for Radeon cards. I will soon have vanilla Metro Exodus results as well, but re-testing isn’t complete as I write this. 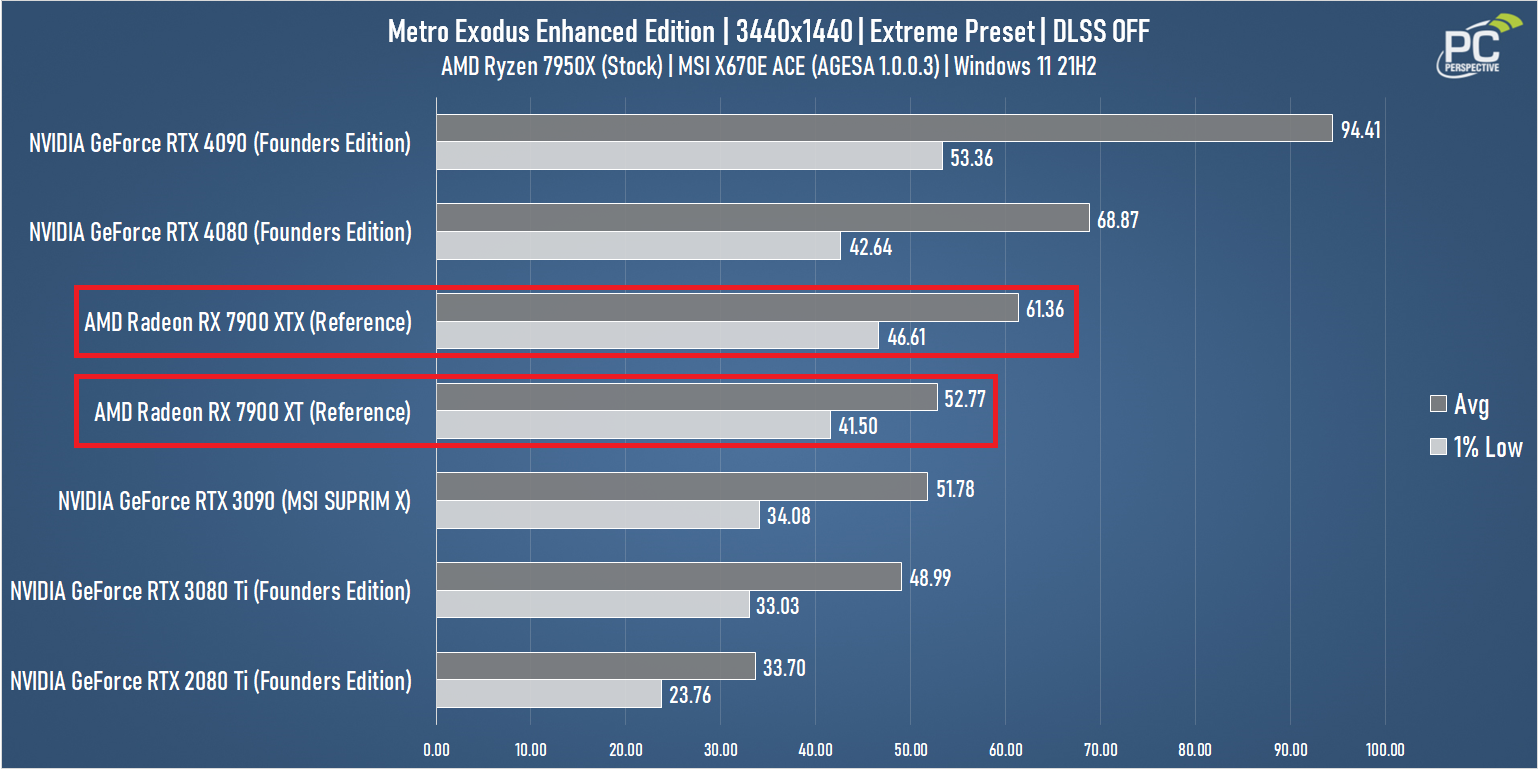 Though both Radeon cards are behind the RTX 4080, it’s a stronger showing than I was expecting from AMD in this particular test, as Enhanced Edition was described at launch as “a radical update that harnesses the power of Ray Tracing-capable GPUs to deliver an incredible visual upgrade”.

(I will add a couple of additional tests here, so if you are reading this and shouting at your screen for the inadequacy of the benchmarks, sorry.)

There has already been some speculation about RDNA 3 and the 3 GHz frequency that AMD says this architecture was designed for. The only thing we actually know is that, clearly, AMD did not get there, as we only see spikes of just over 2.5 GHz from the faster card: 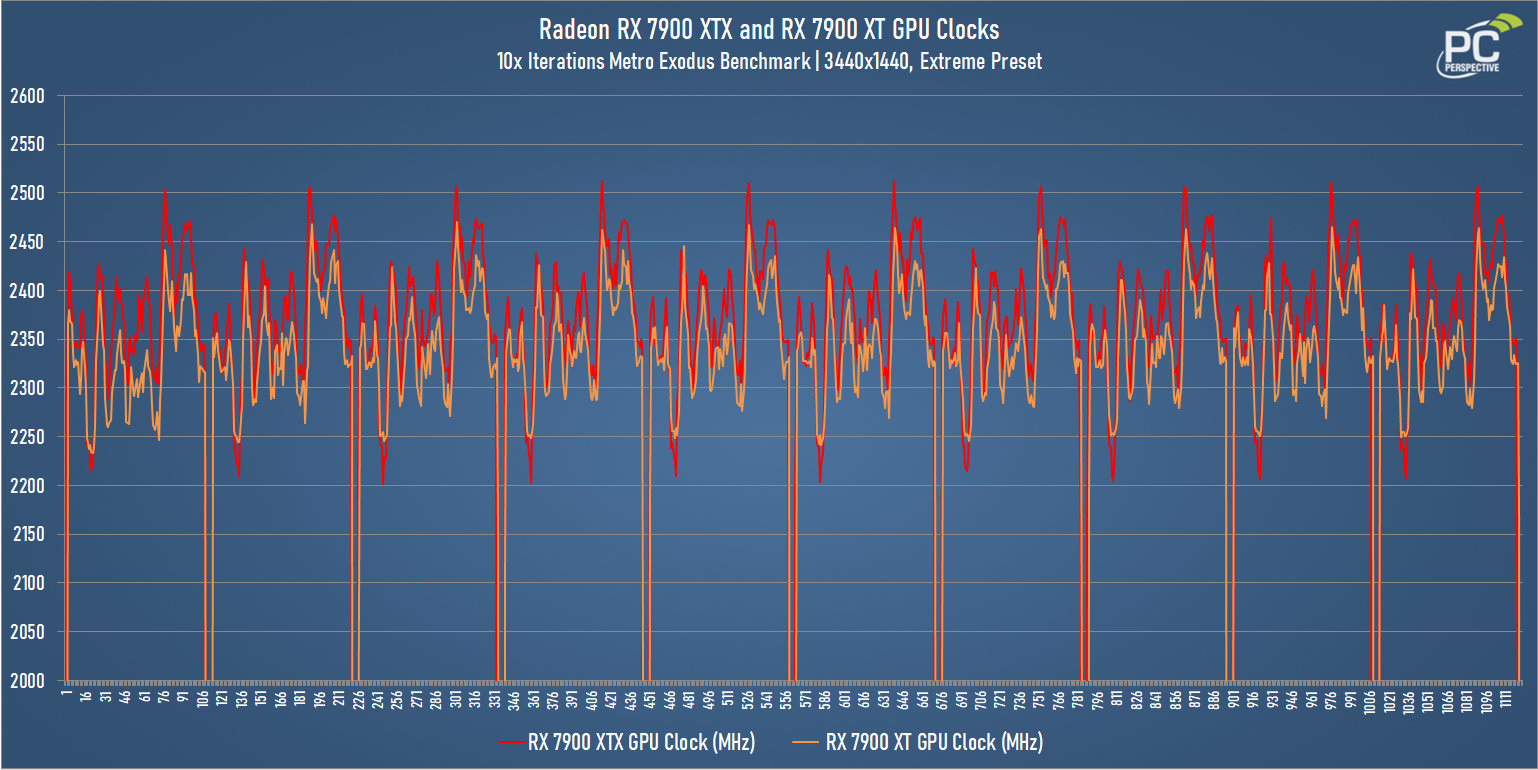 It will be interesting to see how partner cards might scale with beefed up power delivery and factory OCs, though AMD was tight lipped about the maximum frequency we might expect from AIB designs. I anticipate that TechPowerUp will have about 64 reviews on day one, so those questions will have already been answered as you read this.

Power draw is an interesting aspect of these new cards, as well. Partly due to AMD’s decision to stick with dual 8-pin connectors – which they have been very pleased to point out in light of the 12VHPWR drama. 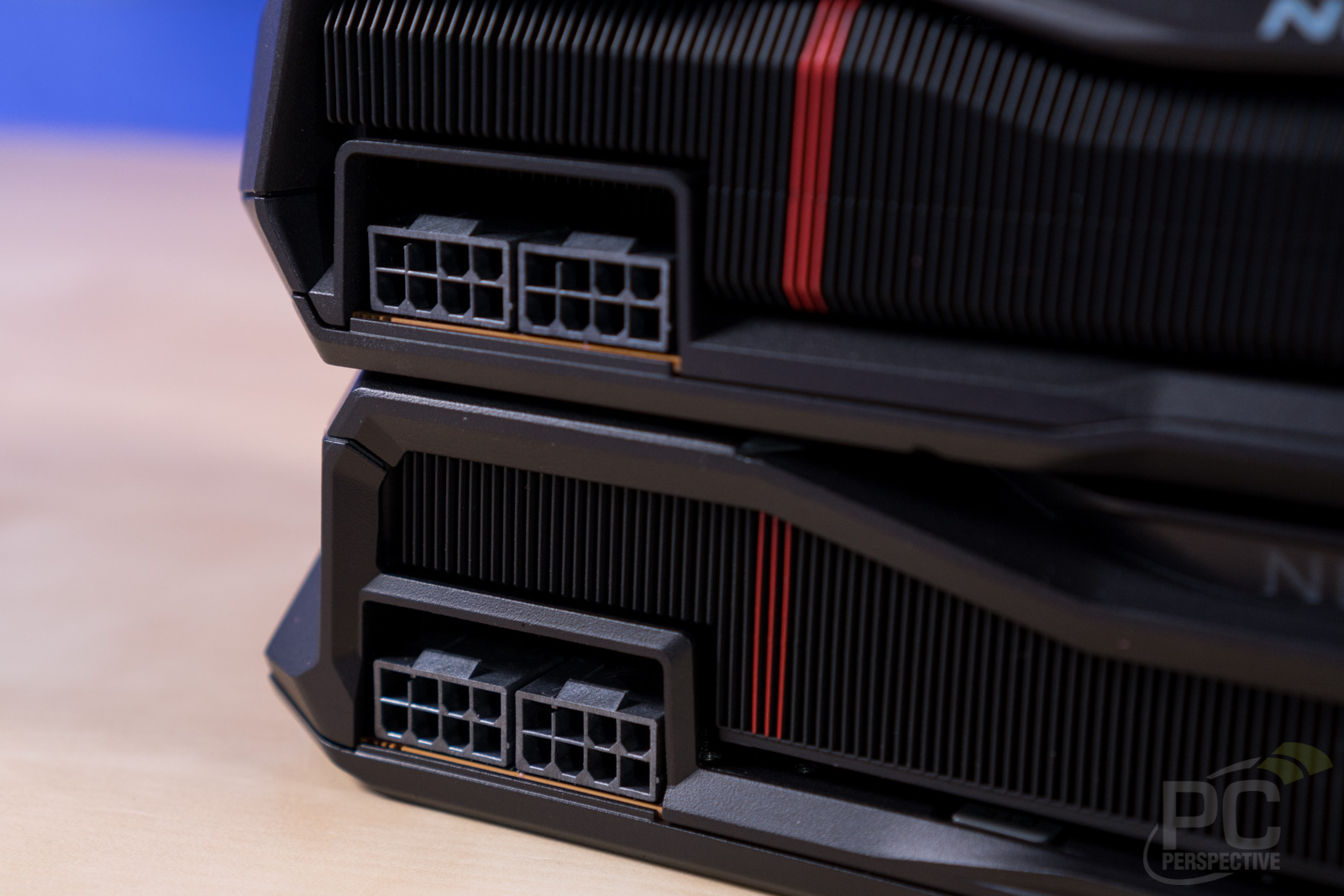 AMD did raise the official specification for the Radeon RX 7900 XT before launch, which was announced as 300 watts, but they say it was found to draw closer to 315 watts when tested internally. I’m assuming voltage might have been tweaked, but who knows.

We have access to the latest version of NVIDIA’s PCAT power monitoring hardware, and connected both of these new Radeon cards to see exactly what was going on during load. And, well, these cards pull more than their rated TBPs under load: 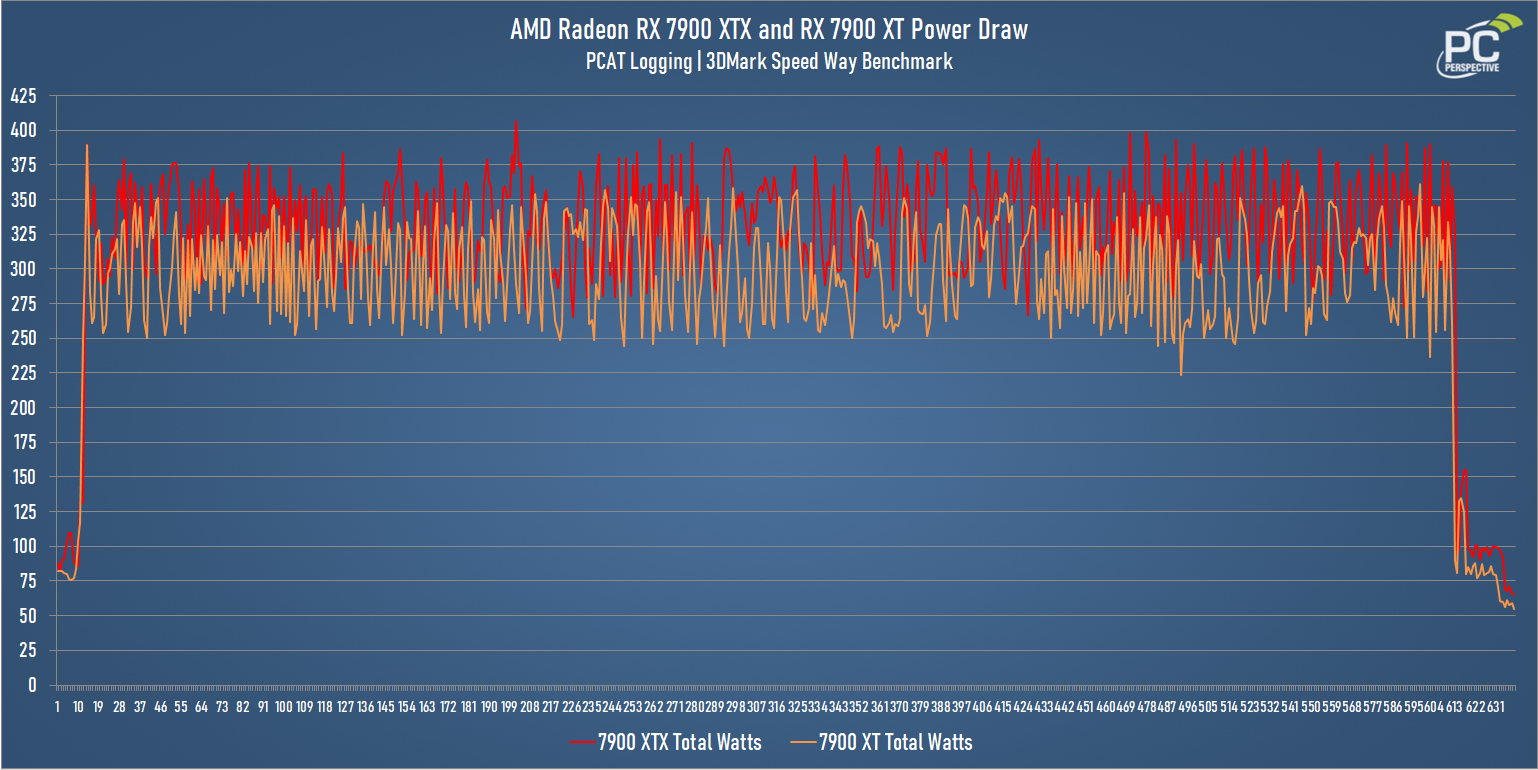 I did also try PCAT logging with the Radeon RX 7900 XTX during a game engine test, and during a run of Metro Exodus Enhanced Edition at 3440×1440 / Extreme I recorded spikes as high as 421 watts. That is 100 watts higher than the biggest spike we recorded from our RTX 4080 FE, though I will update with PCAT logging on the NVIDIA side as well.

Before leaping to any conclusions about foul play here with an NVIDIA power testing device, please understand that we couldn’t rely on our usual GPU-Z logging. During our testing leading up to this review, GPU-Z was not reporting power draw with these new Radeon cards. The PCAT hardware was a great alternative, as it simply sits between the PCI Express power and slot power and displays the current draw from each.

Finally, a quick note on observed thermals with these reference cards. I don’t have Gamers Nexus-style thermal probes or some other hardware solution, so I’ll have to trust the temps reported by the GPUs. During the looped Metro Exodus benchmark runs I used to record GPU frequencies, the highest GPU core temp was reported as only 67 C, with the GPU hot spot recorded as 79 C (in a very cool 17 – 18 C room). These numbers dropped to 60 C core, 71 C hot spot with the reference 7900 XT in the same test.

There are some problems with this methodology to test thermals, not the least of which is the 90-second duration of the benchmark (though it did run ten times in a row). I only provide this information here because I have the data, but thermals will have to be further explored in a longer duration test.

To put our findings to this point in a nutshell, when playing non-raytraced titles the Radeon RX 7900 XTX is faster than an NVIDIA GeForce RTX 4080. When playing games that feature DXR, the GeForce card is still faster. We need to run more tests, and push things harder at higher resolutions than 3440×1440, but I think this is a pretty accurate generalization.

We will have to wait another generation to see if AMD comes up with an answer to NVIDIA in the RT department, as team green is still the undisputed king of real-time ray tracing. (Until then I will continue to be informed by card-carrying Team Red members that ray tracing doesn’t matter.) 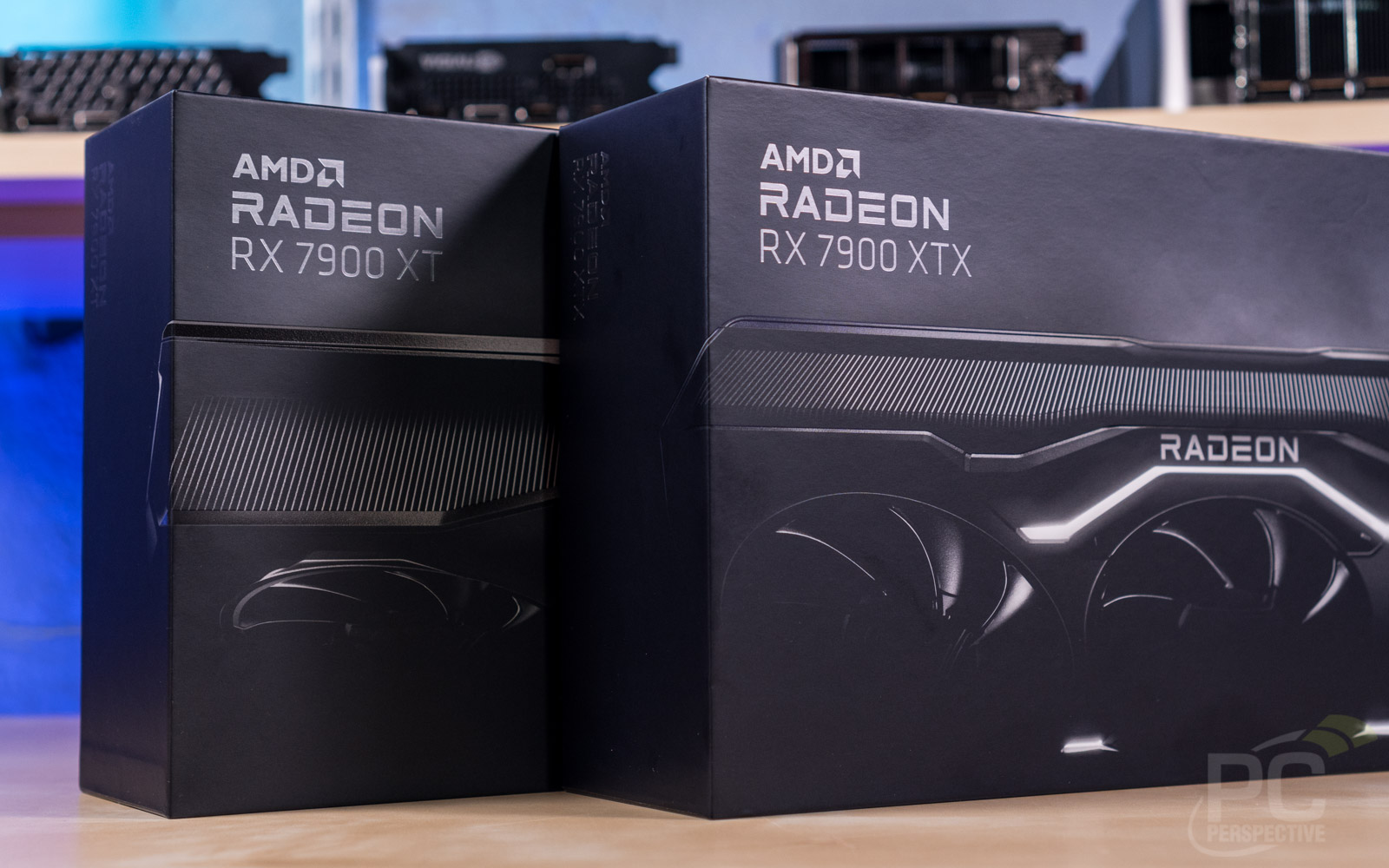 It is interesting to consider just how much more competitive this launch could have been for AMD if they had been able to hit the 3 GHz clocks that they say RDNA 3 is architected for. If this is a hardware issue, and we need to wait for a re-spin, it isn’t going to happen overnight. Personally, I’m hoping for a 3 GHz Edition later on, and some competition closer to the RTX 4090 level, but we will have to wait and see.

Pricing is the key to this Radeon launch. They have enough performance at the high-end to more than trade blows with the RTX 4080, often winning outright vs. the GeForce card at a price that is (currently) $200 less. The story changes when real-time ray tracing is involved, but unless NVIDIA lowers the RTX 4080’s price there is still an “RTX tax” for those that want a better RTRT experience.

We will have to test out some overclocked partner cards to see what performance might have been left on the table, but for now AMD has two very competitive high-end options at $899 – $999, and I anticipate very good sales for both new GPUs.